Trying to cut down your carb intake this year? There are other things you can do besides just giving up bread. And, believe it or not, these low-carb options actually taste delicious!

If you’ve ever tried to lose the carbs before, you’ve probably learned that many low- or non-carb foods taste … well … bad! Some taste like poor imitations of the carb-heavy food they’re imitating, while others just taste like cardboard.

When you finally find a low-carb product you love, you feel like you need to shout it from the rooftops!

Whatever your reasons for cutting back on the carbs, the products below are worth trying out.

Even if you’re not grain- or gluten-free, you’ll love Siete’s Cassava Flour Tortillas. We like them so much, we often use them instead of regular flour tortillas. Compared to the average flour tortilla, these have fewer carbs, less sodium, and more fiber, so they’ll keep you feeling full longer.

These are very thin (you can’t pile on too much stuff), but truly delicious. They don’t have a weird texture and they heat up well in the microwave or on the stove. We love how crispy they can get.

They have a mild, fresh flavor. There are other types out there, as well, but these are our faves.

Whenever you really want bread, reach for these Outer Aisle Cauliflower Thins instead. They have very few ingredients (cauliflower, eggs, Parmesan, salt, and nutritional yeast) and can easily be used in place of bread. They definitely have a cauliflower flavor, but they’re so good. We especially love toasting them for our egg sandwiches.

These are gluten- and grain-free, with only 2 grams of carbs in each piece. They come in the original and Italian flavors. This recipe is also available as a cauliflower pizza crust.

We’re clearly big fans of Siete! The company’s Dip Chips are grain-free, paleo, and vegan. You might even discover you like them more than regular tortilla chips! Compared to those, Siete chips have fewer carbs, as well as less total fat and sodium.

They’re made of cassava flour, which is a really great substitute. They’re light, airy, crispy, and the perfect size for dipping in salsa or any other dip (hence, the name).

Looking for some healthy crackers to snack on? If so, give Hu Kitchen Pizza Crackers a try! They’re small, light, and super low in carbs and fat. They’re also vegan and grain-free. They also don’t contain any vegetable oils or refined starches.

Plus, they really do taste like pizza, especially if you eat them with a bit of cheese. You can eat 26 crackers for one serving, and they’re pretty filling!

You know all those super sugary cereals you used to love as a kid? Magic Spoon is basically those, but way healthier. High in protein to keep you full longer, and low in carbs (which is why they’re also often marketed as keto-friendly), these are also gluten- and grain-free. And despite how great they taste, there’s no added sugar!

The variety pack includes one box each of fruity, frosted, cocoa, and blueberry, although there are plenty of other flavors, as well. They all taste amazing, and they’re great for kids and adults.

The only downside is this cereal isn’t cheap. If you want a healthier, great-tasting cereal, though, it might be worth it.

Sometimes, when you’re doing the low-carb thing, you just want some actual bread. Nothing can truly replace it, but if you want a healthier option, get Dave’s Killer Bread Organic Powerseed. In fact, any kind of Dave’s Killer Bread is delicious (including the bagels), but this one is our favorite.

It has fewer carbs and less sugar than your average loaf of bread, with a lot more protein and fiber. It’s whole grain and slightly sweetened, with tons of seeds for an added crunch. It also makes a great sandwich bread.

There are also thin-sliced loaves available with even fewer carbs!

Hate all those healthier pasta alternatives? We did too, until we found Banza Chickpea Pasta. It’s so good, we eat it about once a week. It’s truly a godsend if you love pasta, but want fewer carbs in your diet.

Made of chickpeas, this alternative is so packed with protein and fiber, it’ll probably fill you up faster than regular pasta. It also doesn’t have that chalky taste many similar replacements do—we love the texture and consistency. There’s also no aftertaste.

It goes well with marinara sauce (we really love it with vegetables, too). In addition to having fewer carbs than regular pasta, it’s also gluten-free!

Packed with fiber and protein.

Even if you’re not a big fan of granola, you’ll probably love Purely Elizabeth’s Chocolate Peanut Butter flavor. It has fewer carbs than comparable brands, and, for granola, it’s pretty low on sugar, too.

It’s also nutrient-dense and made with organic quinoa, amaranth, and chia. Many granolas have a ton of artificial ingredients, but Purely Elizabeth features a great organic ingredient list that’s easy to read. We love the salty-sweet flavor!

Salty, sweet, and packed with nutrients.

These are delicious—they taste like crunchy, crispy, light pieces of cheese—and perfect for when you’re on the go. We like that they’re not too oily and that they’re actually a satisfying snack.

They also come in cheddar and several other flavors.

Generally, pancakes and waffles aren’t considered healthy breakfast options, but with Birch Benders Paleo Pancake & Waffle Mix, they can be! Low in carbs with barely any sugar, this mix also provides a good amount of protein to get you full.

The mix is also super easy to use: you literally just add water and make yourself some pancakes or waffles. We always add an egg and use milk instead of water to make our pancakes a bit heartier, but they’re also good if you use water!

Low in sugar and carbs with plenty of protein.

Rhythm Kale Chips are another great low-carb snack. Reach for these whenever you want something crunchy, but are trying to avoid chips. Even if you’re not a huge fan of kale, you’ll like these—they don’t taste exactly the same and their texture is great.

They’re also low in sugar, have less sodium than chips, and come in a few different flavors. Our only complaint is there’s never enough in the bag!

If you’re a fan of beef jerky, but want something healthier, try Kalahari Biltong. With almost no carbs at all (less than 1 gram), no sugar, and only six ingredients, this healthy, protein-packed snack is satisfying and delicious.

It’s also air-dried, gluten- and soy-free, and thinly sliced for easy snacking. Described as a cross between dry-aged beef, jerky, and prosciutto, it’s not exactly the same as jerky, but it’s pretty close!

A healthier version of jerky with almost zero carbs. 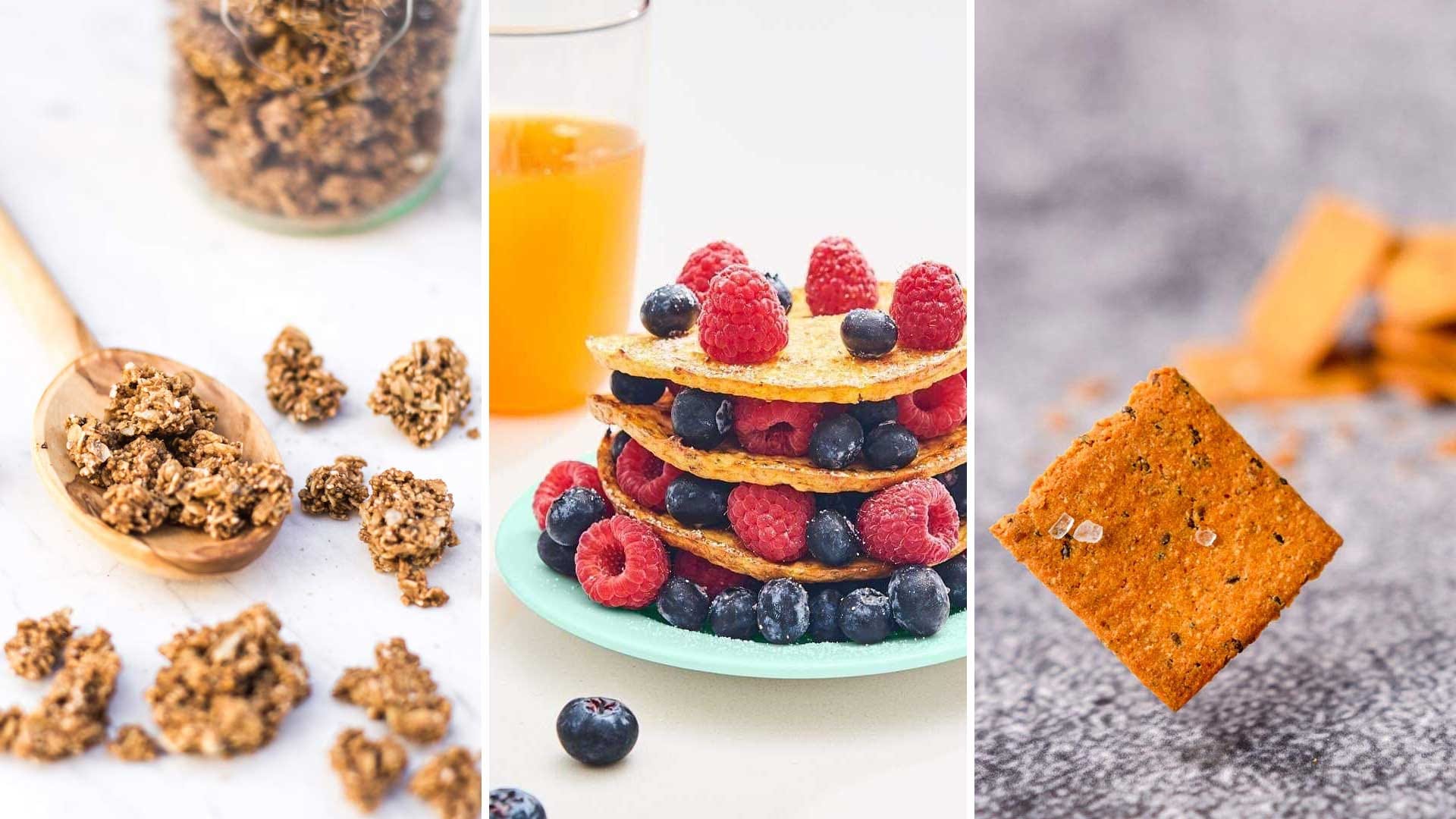