It’s hard to resist scratching mosquito bites, but doing so just makes them worse. Here’s how to terminate that itching sensation so you can resist the urge to scratch.

During the summer, most of us spend more time outdoors, which can be both exciting and a little dreadful—particularly for those who seem to attract a disturbing amount of mosquitos. Although generally harmless to our health outside of areas with mosquito-borne illnesses, mosquitos bites can still be incredibly annoying and uncomfortable.

Intense scratching, the most common response to a bite, only worsens the situation and can lead to longer healing times, yet it’s incredibly tough to ignore. Thankfully, there are some simple ways to soothe the itch and make your life less miserable. If you want to learn a few tricks to make mosquito bites less irritating, this is the article for you.

What Happens When a Mosquito Bites You?

Mosquitos are attracted to us by a combination of heat, the carbon dioxide we exhale, and chemical markers released in our sweat (they can even tell what your blood type is—they prefer Type O). When mosquitos bite you, they’re not just punching a hole in your skin, but also coating it with their saliva. Their saliva contains anticoagulants and proteins, foreign bodies that trigger an immune response. Part of this response is the production of histamine, which causes the affected area to itch. The bite usually remains visible on the skin for a few hours, although it depends on how big it is, as well as the condition of your immune system. Sometimes, a bite can cause a minor allergic reaction known as “skeeter syndrome” (formally, papular urticaria). This results in an increased swollen area, fever, and hives.

Naturally, you want to scratch the itchy bite, but the more you do, the more you damage your skin and the more intense the immune response becomes. More histamine is released, and the bite only gets itchier. Scratch, damage, protect, itch, and scratch. It’s a vicious cycle that can only be broken with a bit of self-control and a few tricks to soothe the symptoms.

How to Stop the Itching

Whether you want to take the natural route or let chemistry do its thing, there are several clever ways to ease the nuisance of a mosquito bite. Here are a few of them.

Clean the Bite with Rubbing Alcohol

If you manage to catch the perpetrator right as it evacuates the area, wipe the bite with some rubbing alcohol. The quick evaporation of the alcohol has a cooling effect that can help relieve the itchiness and prevent any infection from scratching with dirty hands. Refrain from overusing it, though, as too much rubbing alcohol can cause skin irritation and worsen the condition.

If you’re prone to frequent bites, it might be a good idea to keep some topical cream on hand. Calamine lotion, for instance, helps relieve the seemingly everlasting itching sensation from a bite. A mild corticosteroid cream has a similar effect as it reduces the inflammation and redness of the skin. However, it should not be applied to open wounds or your face. It should also be used infrequently, as prolonged use may cause thinning of the skin, acne, and excessive hair growth. Hydrocortisone cream is another option that can come in handy if you’re trying to reduce the swelling of a big bite and soothe the affected area.

Cool Down the Bite

When medication isn’t available, an easy way to help reduce inflammation is by applying something cool to the bite. Use a cold compress, an ice pack, or even a wet cloth to induce the dilated blood vessels near the surface of the skin to narrow and minimize the redness. The cooling sensation on the skin will also have a soothing effect and mitigate the itchiness.

Dry skin is more easily irritated and itchy. When you add a mosquito bite to the equation, things get even worse. The itchiness intensifies, and the instinct to scratch becomes almost impossible to avoid. Make it a habit to thoroughly moisturize after you shower, even if you already have bites on your body. Keep your moisturizer in the fridge for a while before applying it to cool your skin and relieve any itchiness.

Make Good Use of Oatmeal

You can use oatmeal to treat a variety of itchy skin conditions, and it’s a useful and inexpensive remedy for mosquito bites. Make a paste using equal parts of oatmeal and water, and then apply it directly on the affected area. You can also put the paste on a washcloth and hold it against the bite for about 10 minutes. If you’re dealing with multiple bites, try taking an oatmeal bath. Add one cup of oatmeal to a tub full of warm water and soak in it for 20 minutes. When you come out, your skin should feel relieved and look less red than when you went in. Apply a sufficient amount of moisturizer afterward.

Drink tea? Save your tea bags! While you might have heard of using cool tea bags to treat puffy eyes, they can also help with bug bites. Steep several tea bags for a few minutes, squeeze out the excess water, put them in the fridge for 15 minutes, and then apply them to the affected area. The cool temperature of the bag helps, as do, in the case of black tea, the tannins in the tea. Tannins are astringent and should help decrease the swelling and itchiness.

Aloe vera has a variety of benefits, and it’s particularly appreciated for its effectiveness in treating skin conditions. Similar to tea, this plant has anti-inflammatory agents that make it an ideal remedy for mosquito bites. An aloe vera gel can provide relief and reduce swelling, especially if stored in the fridge for at least half an hour before application. The gel can be bought at a drugstore or squeezed directly from the plant on to the skin. If you have sensitive skin and are prone to bites, you might consider getting yourself an aloe vera plant.

Finally, you can attack the problem from the inside out. Antihistamines mitigate the immune response to the mosquito bite by lowering the histamine count in the body. This option is particularly useful when a skeeter syndrome is triggered because it’s difficult to manage the symptoms with natural remedies. Oral antihistamines are effective anywhere from four to six hours on the short end (with Benadryl or similar) to up to 24 hours on the longer end (with loratadine, cetirizine, or similar). Most people find Benadryl sedating, so you may prefer to take a general-purpose daily allergy pill, like loratadine, to avoid excessive sleepiness. Talk to your doctor about which antihistamines would work best with your lifestyle and any current medications.

Mosquito bites are inevitable if you spend time outdoors in a warm climate. When they do bite, it’s good to refrain from scratching, even though it may seem almost impossible. However, if you try some of the tricks mentioned above, the itchiness will eventually subside, and you’ll be able to go about your day without causing further damage to your skin. 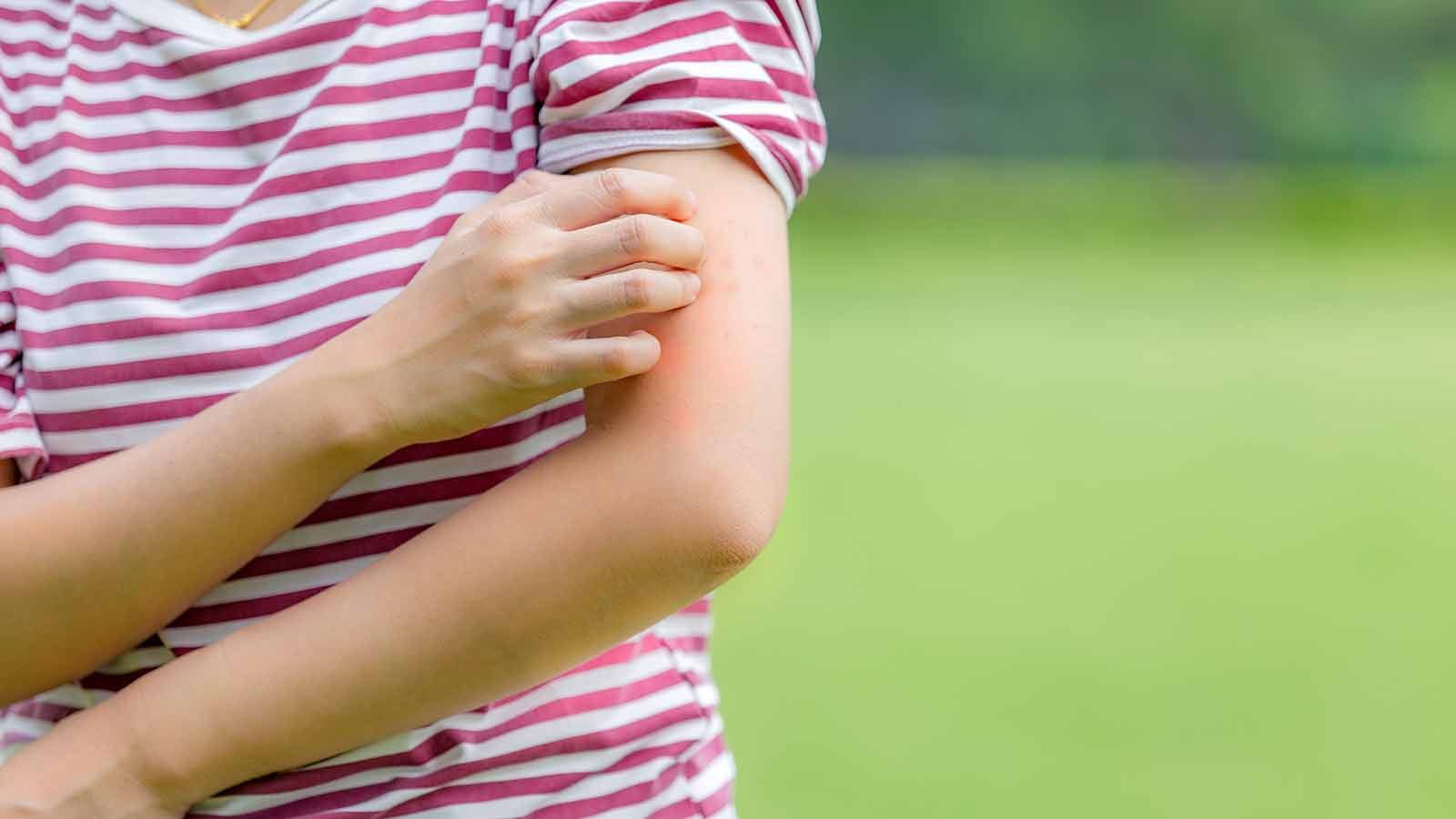