We all know that using positive language is more effective when it comes to communicating with your children (and with other adults, too!). But that doesn’t mean we always do it. Here’s how to upgrade your go-to parenting phrases.

Even the most thoughtful parent can slip into repeating negative phrases, especially when exhausted (and what parent isn’t exhausted?). Specific phrases end up being overused, such as “Stop that!” or “I said no.” It takes intention and awareness to upgrade your parenting phrases. But don’t worry, we’re here to help.

It might feel like a lot of work in the beginning, but believe us, it’ll become second nature over time. And don’t beat yourself up for the times you say the wrong thing—we’re all learning how to do this parenting gig and it’s natural to make mistakes. Just remember, the more calm, present, and engaged you are, the more effective your parenting will be. And this will benefit your kids in the long run, even if you have the occasional slip-up.

Early childhood is riddled with over-the-top, out-of-control tantrums. We’re talking about little toddlers flinging themselves to the ground, pounding their fists, while their faces turn red with anger and fury.

It helps to keep in mind that tantrums are usually a young child’s way of responding to negative, intense emotions that they simply don’t know how to handle or express otherwise.

It’s almost impossible to try to apply reason and logic to a child who is out of control. Instead, offer them a lifeboat with these phrases:

These types of phrases reassure your child that you are there, ready to help and support them through these powerful emotions. But telling them to “Knock it off” or downplaying what they’re feeling will often have the opposite effect—making them feel unheard and misunderstood.

Above all, avoid saying, “Calm down!” because little kids don’t really know how to calm down. Instead, try saying, “Let’s count to 10 together” or “How about we step outside for some fresh air?”

An alternative to “Stop it!” can be, “Tell me what you’re feeling right now. I want to help.” The more you can focus on their intense emotions, the more you can help them find ways to manage them better in the future.

Being let down, disappointed, or generally bummed about the outcome of a situation is normal, for children and adults alike. However, as adults, we’ve come to learn that disappointments are just a part of life. But for a small child, it feels like the end of the world.

First, try to validate your child’s disappointment by saying something like, “I understand that you’re very disappointed by this rainstorm. I know that you were counting down the hours to go swimming at your friend’s pool.”

You don’t have to offer an alternative, although it could help (such as “How about we watch your favorite movie instead?”). You want to respect and value their feelings, to whatever capacity they want. Once they’ve worked through their disappointment, it’ll be easier for them to move on to the next activity.

If your child is crying, avoid saying, “Stop your crying” or “It’s really not that bad.” Expressing emotions through tears is very helpful. You can hug or hold them, giving them permission to cry, such as, “Go ahead. Cry it out.” Having the opportunity to feel and express sadness and disappointment will better equip your child for the next time something disappoints them. They’ll learn that they can be sad about it, and then move on.

It’s important to make sure we don’t teach children to hide or suppress their anger. But we also want our children to learn appropriate ways to express it, without using violence or aggression.

Avoid saying, “Don’t be angry!” This just makes your child feel bad for feeling angry, so now they have anger and guilt to deal with. Instead, let them know that feeling anger is totally okay. You can try a phrase like, “I can feel angry too. It’s normal. But it’s important to talk about it, and never to hit or shove.”

Above all else, you want to teach your children that it’s crucial to keep everyone safe and protected, especially when expressing intense emotions.

What to Do with Chronic Complaining

Often kids want to complain about what’s not working, or what’s not right in their lives. It’s easy to throw out quick phrases like, “Stop complaining. You don’t know how lucky you have it.” But often your child will keep repeating the complaint because he feels like he’s not being heard. Or perhaps he’s looking for a concrete solution.

Go ahead and open the door to discussion. Sit down and give them space to vent about the complaint. Then ask them if they want help with finding a solution. Phrases such as, “What do you think we can do to make this better?” or “Is there anything I could do to help?” are effective.

Also know that sometimes your children want to vent about a particular situation, without needing a solution. Give them the space to do so, but if it continues long-term you can say, “How about you vent about this for five minutes, then we find something fun to do together?” This gives the complaint a boundary, without shutting it down completely.

If your kids say something negative, mean, or snarky to you, avoid retaliating with your own angry comment (which can result in escalating the situation).

Instead, teach them that they can pause, think through what they’re going to say, and reframe it positively. Phrases like, “Please try that again” or “That was hurtful. Do you think you could rephrase that in a more positive way?” gives them the opportunity to learn that their words can hurt.

Ultimately, this gives your children the tools to become better communicators, as well as minimizing your negative reaction to their hurtful comments.

Often when we pick up our kids, we ask them a yes or no question, such as “Did you have a good day?” They aren’t encouraged to elaborate, and often they won’t. And then we’re left feeling sad, wondering why our kids never open up to us. Or maybe we snap at our teenage, saying, “You’re so distant! Why don’t you tell me anything?” Unfortunately, this just makes them shut down even more.

Think of different ways to engage your child in conversation. Try things like, “What was your favorite part of today?” or “Tell me an interesting story from your field trip.” This opens up the table for a more in-depth discussion.

Also, be aware of your level of distraction when you nudge your child to open up. You might ask your child about her day but then look at your phone, signaling that you don’t really want to have a conversation. So set aside distractions, get down to eye level, and ask some open-ended questions.

The more we shout, yell, demand, and belittle our kids, the more they tend to fight back or shut down. However, if we can put the ownership in their hands to brainstorm solutions to problems, the better it’ll be for everyone.

Specifically ask them for their advice, such as “What do you think needs to happen so we can get to the bus on time?” Or, “Do you have any ideas on how to make the bedtime routine easier for everyone?”

Have them write up a list, such as setting shoes by the doorway, packing their backpacks the night before, having a timer for when it’s time to brush their teeth, and so on. This makes them feel like they’re taking charge of their actions, instead of being at the mercy of your nagging.

Overall, talk to them about the bigger picture and how their overall actions affect people, including yourself. Phrases such as, “I feel sad when you say mean things to me. It hurts my feeling” or “I feel stressed when it takes you an hour to put on your shoes. Let’s find a solution for this together” shows them that you have emotions and feelings, too. And it also teaches them that their actions affect other people, sometimes in negative ways.

In the end, lots of positive praise is more powerful than negative reprimanding. It may be hard because we want them to stop doing the negative stuff, and often our only approach is to say “no,” over and over again. However, we end up sounding like a broken record, one that our kids quickly tune out.

Make sure to praise your child when they do what you’re asking. Don’t just say, “Good job!” but spell out what they did, such as, “You really took the time to set the table properly. I love how you folded the napkins. It will make dinner feel extra special.” The specifics will stand out in their mind, making them more inclined to repeat the positive behavior in the future.

Also, make a big deal when their actions positively affect you. You can say, “I really appreciated it when you finished your homework on time. It made me feel less stressed. How about you?”

Make sure to focus on their process and overall effort. Don’t just give feedback on the result, such as “That’s a fantastic painting you did.” Go into the detail, such as, “You really spent a long time creating that painting. I love all the attention to detail.”

Figuring what to say, and what not to say, to your kids can be challenging. But the more you work on rephrasing comments in a positive light, the more effective your communication will be. Remember, you don’t have to be perfect—just make an effort, and be completely honest about your feelings. 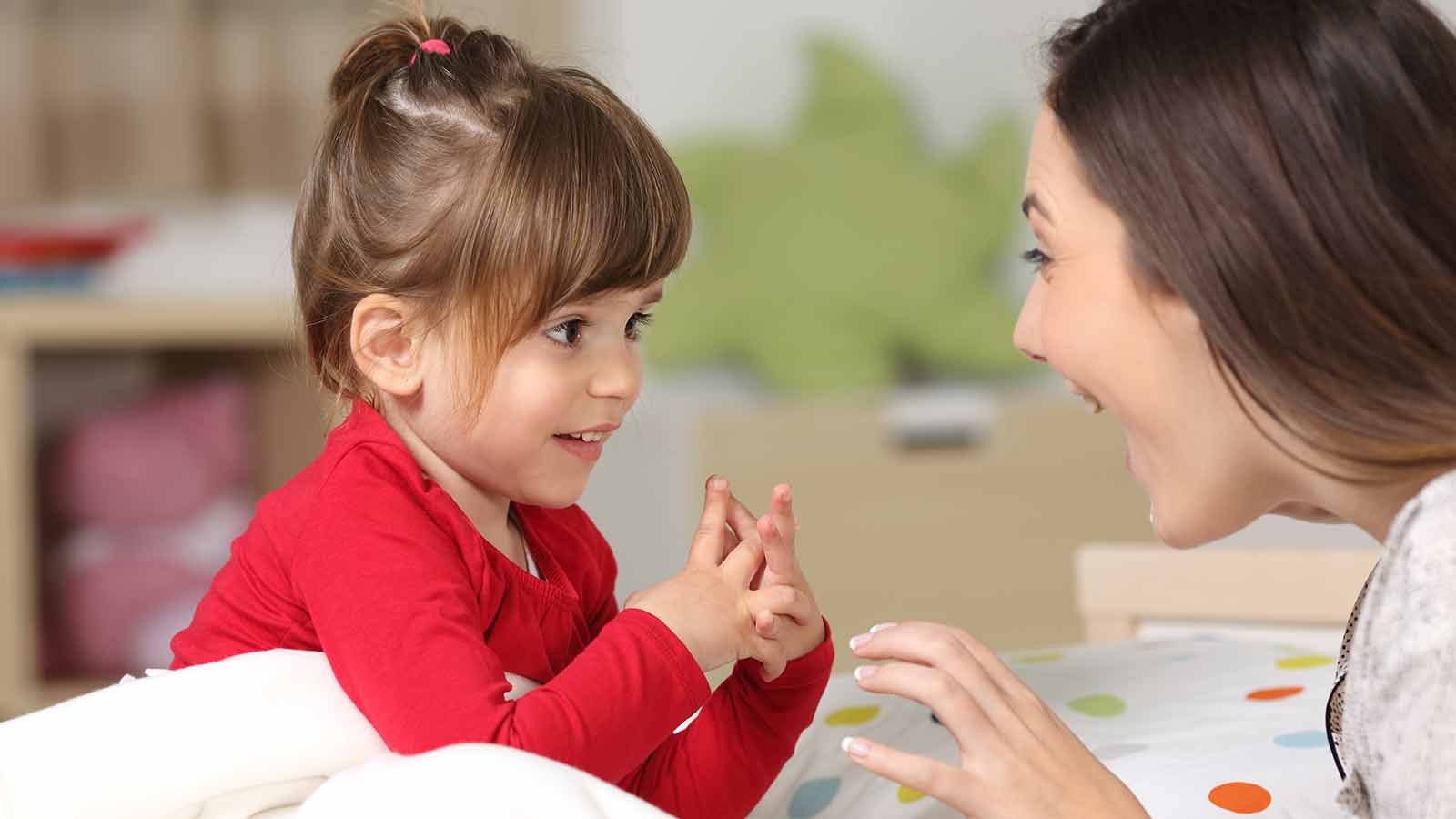