Trivia games are perfect for groups and parties. They’re easy to play, and the numbelsm168-20r of players is usually unlimited. Whether you love being quizzed on films, history, or cocktails, you’re sure to discover a new favorite below.

Because they’re usually just a deck of cards and the occasional game board, trivia games are easy to take to a friend’s place for game night. They can also improve your cognitive skills and memory, which is helpful for everyone.

That’s why we’ve rounded up some of the most unique trivia games on the market right now.

I Should Have Known That!

I Should Have Known That focuses on questions you probably know the answer to, but will have to dig deep in your memory to answer. It’s the perfect balance of challenging and attainable. It’s only a matter of time before you’ll find yourself saying, “I should have known that!”

Hygge Games ...I should have known that! Trivia Game Green

Movie lovers are sure to adore Cinephile: A Card Game. Its unique design allows for multiple ways to play and different levels of difficulty.

Each actor card also includes an illustration, so you don’t have to Google someone every five minutes. It’s perfect for casual moviegoers and cinephiles, alike.

Sample question: David Bowie has starred in which films?

The questions in I’m Not Saying You’re Stupid are almost impossible to answer correctly (in the most fun way possible). It’s a game of guessing to your best ability and the results are hilarious. If you don’t take yourself too seriously, you’ll have a great time playing this game.

Sample question: How long can a dolphin hold its breath?

All the trivia in Hella ’90s focuses on 1990s pop culture, slang, and media. With over 400 questions, you can relive the dopest decade in a question-and-answer format. The game even includes a link to a ’90s Spotify playlist you can jam to while you play.

Sample question: If you give someone “props,” what are you giving them?

Death By Trivia is all about morbid, creepy questions. It’s perfect for Halloween, horror movie nights, or whenever you feel like breaking out your spooky side. With over 2,500 questions, it’ll be around for the long haul.

Sample question: What TV show featured a scene with the character Jesse Pinkman trying to dissolve the body of a meth dealer in a bathtub with hydrofluoric acid?

Death by Trivia - A Party Game with A Killer Twist

To play Pun Intended, you have to guess the missing word or phrase to finish each pun. It’s perfect for dads or that friend who makes everyone groan at least once a day with a lame joke or pun. It’s perfect for a family game night because your kids have probably heard most of these from you.

Another decade-specific option, Like Totally ’80s covers trends, movies, fashion, and more from the decade that brought us leg warmers, feathered hair, and parachute pants.

To play, you have to answer totally rad questions about MTV, culture, and more. If anyone gets too competitive, tell them to take a chill pill. Like the Hella ’90s game we covered above, this one also has a Spotify playlist.

Sample question: What was the average price of a movie ticket in 1985?

The Conspiracy Theory Trivia Board Game focuses on both well-known and more obscure conspiracy theories from the last several decades. It works best with teams but can be played with as few as two players. Just make sure you do your research before you believe any of these! Some are pretty convincing.

Example question: What is the common conspiracy name for “Covert Global Aerosol Geoengineering?”

The MTV Game features music trivia from the ’80s, ’90s, and ’00s. Fire off song titles, try to remember who sang what, and reenact some of the most popular videos from MTV (back when it actually ran videos, that is). Adults who always wanted their MTV when they were younger will fare best at this game.

Sample: Name five songs that contain the word “tonight” in the title.

MTV Game, The Music Throwback Party Quiz Board Game, for Adults and Teens Ages 14 and up

After whipping up some drinks for everyone, pull out Another Round! This trivia game tests everyone’s knowledge on the history, recipes, and other facts about cocktails.

It also includes bonus tips on bartending and some fun recipes to try. This game is a great conversation starter for work events or parties.

Another Round: 200 Trivia Questions for Cocktail Nerds: Card Games 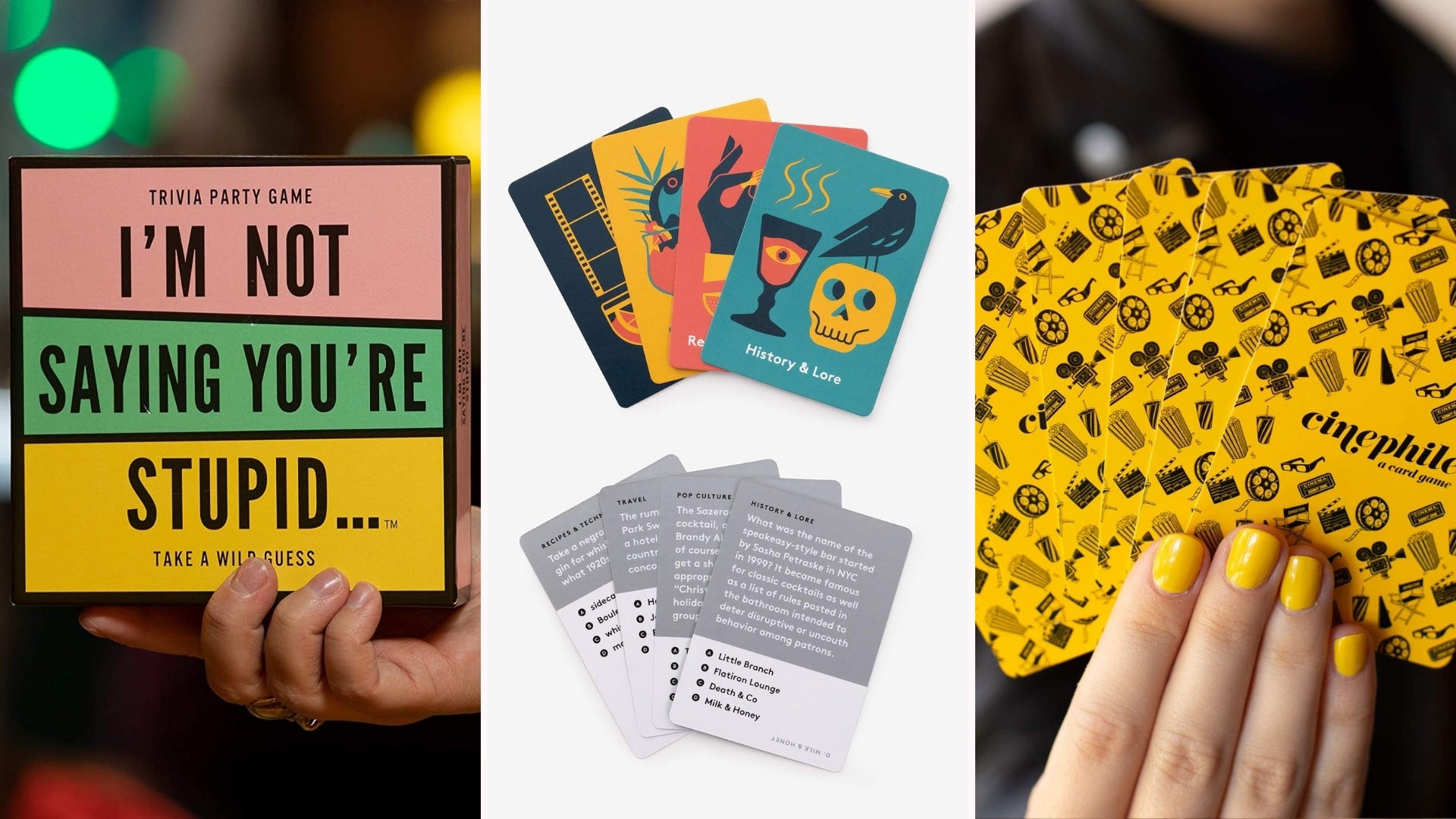