If cooking more is on your to-do list this year, have you thought about mixing up your favorite kinds of pasta? Pasta dishes are some of the easiest, most affordable meals to make. But you can really elevate your game by pairing different noodles with the sauces that work best with each.

We’ve assembled 12 pasta dishes below—one for each month of the year! If you try this delicious cooking challenge, your family will be thanking you all year.

Defining features: When someone says “pasta,” a plate of spaghetti is likely what pops up in your head. It’s a moderately thin noodle, with a flexible bendy shape that typically requires a bit of twirling or slurping to eat.

How to serve: Its flexible shape makes spaghetti a popular choice as a base for a hearty sauce or other foods. The classic, of course, is spaghetti and meatballs in red sauce, but that’s not the only option! It’s also great with seafood, which often has a lighter oil-based sauce.

How to serve: Fettucine alfredo (the noodles in a creamy, cheesy white sauce) is the most famous fettuccine dish, but, as any Italian will definitely remind you, it’s not actually a traditional dish. Because it’s a bit sturdier than spaghetti but still flexible and thin, fettuccine is one of the most versatile types of pasta. Try it with your favorite veggie or meat sauce!

Defining features: Ravioli is stuffed pasta, plain and simple. Although they can come in any shape, they’re typically either rectangular, triangular, or rounded pockets. They’re stuffed with fillings and crimped around the edges.

How to serve: You can eat ravioli either by themselves (boiled, then dressed with some sauce) or as part of a baked pasta dish. Either way, the filling will typically determine the best kind of sauce. The heavier or more flavorful the filling, the lighter the sauce should be. For example, a dish of cheese ravioli might be paired with a meaty ragù, but a hearty mushroom-filled version would pair better with a light butter sauce. Don’t be afraid to try new flavor combinations or unusual fillings!

Goes with just about anything.

Defining features: There are two types of macaroni: straight and curved. However, the most popular is probably elbow macaroni, which is bent into a curved shape. Generally, macaroni noodles are small, short, narrow tubes with a hollow center.

How to serve: Macaroni and cheese, with noodles, either tossed or baked with a creamy cheese sauce, is a comfort food staple. But that’s not the only way you can eat macaroni! Its small shape makes it ideal for pasta salads that don’t have large chunks of other ingredients. Because of the small hole in the middle, macaroni can also hold more liquid or sauce, making it a great choice for soups, like minestrone.

Defining features: Penne is a “medium” pasta in every sense of the word. It’s moderately thick, tube-shaped, and cut on an angle into midsized individual pieces. Penne comes in both ridged and smooth varieties, but the ridged is definitely the more popular.

How to serve: There’s very little that won’t go with penne, so if you’re up for experimenting, here’s your chance! The combination of ridges and a hollow center makes it ideal for highlighting the flavor of the sauce, as it can absorb and hold more of it. This also applies whether you use it in a baked dish or serve it with fresh sauce on top.

Made from organic durum wheat semolina.

Defining features: The defining feature of orzo is that you might mistake it for rice! Unlike most kinds of pasta, orzo is very small and thin. It’s shaped more like a grain than a traditional noodle.

How to serve: Orzo will work in many dishes. Pasta salads with it are increasingly popular, but you do have to be careful. As the pieces are so small, they don’t stand up well with creamy dressings. An orzo pasta salad is best when tossed with veggies and a light oil-based sauce or dressing. You can also add it to soups, especially if you’re a risotto fan, but don’t like how labor-intensive it is. Orzo cooked with broth and cheese will make a delicious substitute.

Defining features: Think cannoli, but in pasta form! Manicotti is a stuffable noodle. Unlike ravioli, though, it’s not a fully sealed pouch. Rather, the noodles are large, wide-open hollow tubes, with plenty of space to stuff with fillings.

How to serve: The sauce on the outside isn’t as important as what’s on the inside, so have fun with the fillings! Cheese fillings, like ricotta-based, are the most popular. However, the same as with ravioli, there’s nothing stopping you from experimenting a bit. Just make sure the flavors of the filling and the exterior sauce go well together.

Plenty of space for your favorite fillings.

Defining features: It’s impossible to mistake farfalle for anything else! The name means “butterfly” in Italian, and the shape of the pasta makes it clear how it got its name. They’re pinched in the middle and fan out on either side, resembling a butterfly with open wings or a bowtie.

How to serve: Because of the deep crevices formed by the folds of this pasta’s “wings,” it holds a lot more sauce than many other noodles. As a result, lighter sauces and dressings tend to work best with it. It’s also a popular choice for pasta salads, as the dressing can seep into the crevices. But these noodles are also large and sturdy enough to hold mix-ins, like veggies, cheese, and more.

How to serve: Few type of pasta are as friendly to sauce as fusilli, thanks to its unique spiral grooves. Toss it with a flavorful thick veggie or meat sauce, or use it in pasta salad. Those grooves will soak up the dressing, while its shape withstands the heartier ingredients.

Soak up plenty of sauce with these twisty ridges.

Defining features: A cousin of sorts to ravioli, tortellini is a compact stuffed pasta. They’re traditionally formed into a small ring shape. The two thin ends meet to create a circle, while the thick stuffed section sits between. They’re usually stuffed with cheese, although other fillings, like spinach, are popular, too.

How to serve: In many ways, tortellini is the great “in-between” type of pasta. Like ravioli, it’s filled and hearty enough to withstand pretty much any sauce you want. An oil dressing, a butter and cheese sauce, or a hearty red sauce will all work well with tortellini. Because it’s smaller than ravioli, you can also make soup with it. Tortellini soup recipes are quite popular and allow you to incorporate fresh ingredients year-round.

Mix it up with a spinach and cheese filling.

Defining features: Orecchiette is a type of pasta you can’t mistake for anything else. They’re shaped like tiny ears (hence the name, which translates to “little ears” in Italian), with a deep inset that gathers sauce and toppings easily.

How to serve: Creamy sauces are an especially good pairing with orecchiette, as the cup-shaped noodles perfectly collect the sauce in each bite. Soup is another option. Try it in a sausage and greens soup or a classic minestrone!

Small and cup-shaped for soups and sauces.

Defining features: Bucatini is a bit of a hybrid pasta. It’s a relatively thin, long, and flexible like spaghetti, but it’s just thick enough to accommodate a hollow center.

How to serve: The hollow center allows bucatini noodles to “suck in” some extra sauce, making it ideal for lighter creamy sauces that will flood the center. You can eat these like spaghetti, but with the extra “sauciness” that comes from that hollow center.

Thin, yet hollow, to suck up all the sauce. 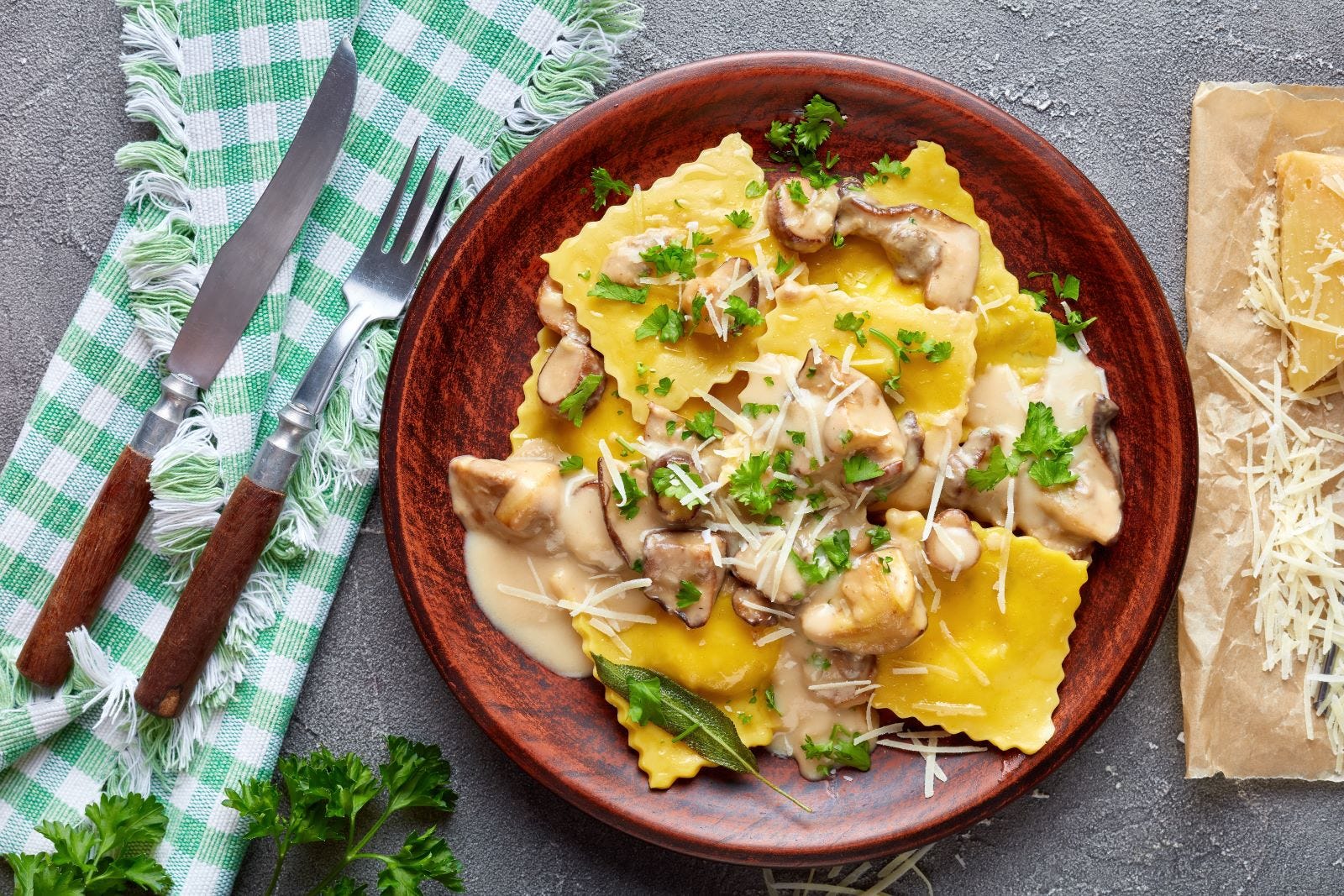