When you’re in a new, unfamiliar place, it’s easy to fall for a scam you’d never even consider at home. Here are some of the most common travel scams—and how to avoid them.

Whether it’s your first visit to a city, or you’re in a different country that uses a different currency, the disruption of your regular routines and expectations make you an easy target when you travel. Let’s look at the most common scams unscrupulous locals use on tourists.

Taxi scams have a long (and lucrative) tradition. They’re one of the most common scams going, and you can fall for them as soon as you arrive. There are a few different categories.

The simplest is your taxi driver ridiculously overcharges you. He might quote you a flat fee that’s significantly more than the going rate, use a sketchy meter that goes up too fast, or take a roundabout route.

Another way taxis overcharge is by including extras, like toll bridge charges or airport pickup fees. And they’ll charge them twice: once automatically on the meter and again at the end of your ride.

Particularly in Asia, taxi drivers might tell you that your hotel, a tourist attraction, shop, or restaurant is closed, either permanently or for lunch/siesta/Wednesdays. But the good news is, he’s got a friend who rents rooms/knows an alternative, and he’ll happily take you there.

Of course, your hotel isn’t really closed—he’s just going to overcharge you, take you on a tour of the city during which you’ll be pressured into buying stuff, and then take a kickback from whichever businesses you visit.

How to Avoid Taxi Scams

Taxi scams are easy to avoid with two simple rules:

That guy selling you cheap Hamilton tickets on Craigslist because he can’t go on short notice? He’s lying. That super-cheap apartment in a great location? Also a lie.

Fake tickets for events and attractions (or real tickets sold for double the price) are another common scam travelers fall victim too. If you’re planning to visit the Louvre and someone offers you discount tickets for €10 on the street, it’s tempting to buy them. However, when you get to the Louvre, you’ll discover the tickets are fake, and you’re out €10—plus the cost of the real tickets. Or, someone might offer you £10 discount tickets to the British Museum but, when you get there, you find out it’s free.

Airbnb has also conditioned people to the idea of renting accommodations other than hotel rooms. Two apartment listing scams I’ve personally encountered are:

How to Avoid Fake Tickets and Sketchy Listings

Only buy tickets for events through official sources, like the website, at the ticket desk, or from your hotel’s concierge. Never buy “discount” tickets from people on the street.

Only book your accommodations through trusted sources with some protection, like the hotel’s website, Airbnb, or Hotels.com.

Scammers want your money. If they can trick you into giving it to them directly, they will. And, when you’re not familiar with the currency you’re using, it’s even easier to be fooled.

Fake bank notes are a problem everywhere, so watch the change you receive, especially if you pay with a large bill. If you’re unfamiliar with the currency, you probably won’t notice you’ve been given fake cash until you try to spend it.

The inverse of this is when you pay with a large note and are then accused of using fake money. They might even switch it out for a fake note when you’re not looking. In this case, they’ll insist they legally have to confiscate the fake note—and you still owe them money.

Also, if you use a street-side currency exchange, they could just exchange your genuine dollars for fake ones.

You especially need to be careful when you use a card abroad. Tourists are easy targets for card skimmers because they tend to have money and, if the skimmer waits a few days before trying your card, you’ll most likely have left the country and won’t be able to take legal action. My brother (he’s Irish but lives in Alabama) was skimmed at a bar in JFK airport when he was flying home for Christmas.

How to Avoid Currency Traps

Familiarize yourself with the local currency when you arrive. Get a feel for what it looks like, what the different denominations are, and so on. You’ll never be as comfortable with it as a local, but at least know what the person on the front of each bill looks like.

Check your change carefully. Make sure it’s the correct amount, and the notes are real.

When you hand over money or your bank card, pay attention. This won’t necessarily stop a skilled scammer but, if they see you’re watching them closely, they’re much less likely to try something. There’ll be another mark along shortly.

When you’re withdrawing money or exchanging currency, only do it at a bank or other official currency exchange. A bank’s ATM is much less likely to be sketchy than one at a local bar.

Guilt trips aren’t technically a scam, but rather, an awkward situation. Someone will approach you on the street and try to give you something, like a friendship bracelet, rosary beads, or Buddhist charms—and they can be quite forceful. After you accept, they’ll insist on payment. If you refuse, they get loud, aggressive, or insistent hoping you’ll pay them off to prevent a scene. Whatever you pay will be far more than the tack was worth.

This has happened to me a few times. Once, a monk (or rather, a scammer dressed as a monk) put a charm around my neck and insisted I pay him for it. On another occasion, I was on a train and on every seat was a small packet of disposable tissues. I assumed it was an advertising campaign but, a few minutes into the journey, a woman demanded that anyone who’d taken the tissues pay her for them.

A similar scam is run in some shops. The staff offers you a cup of tea or a drink while you browse. If you try to leave without buying something, they accuse you of abusing their hospitality and try to guilt you into making a purchase.

How to Avoid Guilt Trips

Don’t accept anything free from anyone, especially on the street.

If someone seemingly gives you something for free but then insists you pay for it, politely give it back. If they start making a scene, ignore them. Most locals will be familiar with the scam and assume you’re in the right.

When you rent a car, motorcycle, Jet Ski, or anything else abroad, imaginary damage is a scam you need to watch out for. Here’s what happens.

You rent the vehicle and head off on your merry way. When you return it, the person at the rental company points out some scratch, ding, dent, or imaginary damage, and insists you caused it. Of course, the cost of repair is exorbitant.

How to Avoid Damaged Rentals

To avoid this scam, film a video of any vehicle you’re renting from every side. If there are any scratches, dents, or dings, call them out in the video. If you can, have the rental agent with you while you do this. This way, when you return the vehicle, you can prove the damage was there when you rented it.

While pickpockets are straight-up thieves rather than scam artists, the two overlap when a scam is used to distract you so someone can pick your pocket. For example:

How to Avoid Pickpockets

Pickpockets are tricky to avoid as they walk right up to you. Be extra careful when someone invades your personal space. The man asking you for directions might be genuine, or he might also be taking your wallet. Similarly, if someone spills something on you, step back, and don’t let them pat you down. Maybe they’re just clumsy, and you can clean it up yourself—or it was a distraction so that they can swipe your pocketbook.

Be careful how much cash you keep in your wallet and where you keep it. It’s better to use a money belt. Also, make sure you leave a backup bank card in your hotel room. This way, if your wallet is stolen, you still have access to cash.

This might surprise you, but stalls in street markets are not official Nike retailers. Nor is that kindly gentleman selling genuine Ray-Bans (75% off) from a rug by the side of the road. Almost all (let’s be honest—it’s all) the name-brand goods for sale in street markets are knockoffs. If they’re real, they’re stolen.

Another market scam draws you in with things like handcrafted rugs, high-quality silks, local goods, and so on. You inspect them and find they’re actually well made. You purchase one, and it’s taken out back to be wrapped up for your flight home. After you get home, you find you’ve bought a cheap polyester rug or an otherwise fake product. The genuine article was switched when it was sent to be packed.

How to Avoid Fake Goods

Don’t buy name-brand products at a street market. No, that’s not a cheap Rolex for sale. No, those aren’t Nikes—the logo’s facing the wrong way. If a deal looks too good to be true, it probably is.

When you’re buying something genuine, handcrafted, or local, don’t let them package it in such a way that you can’t inspect it. Insist you can do it yourself; this way, they can’t switch out the product for a fake. If you can’t package it yourself, don’t buy it.

Dealing with scams is an unfortunate part of traveling. In Europe or Asia, you’ll almost certainly run into someone who’ll try to take advantage of you. With a bit of foreknowledge and common sense, however, you’ll be fine. Make it clear you know what they’re up to, and they’ll look for an easier mark. 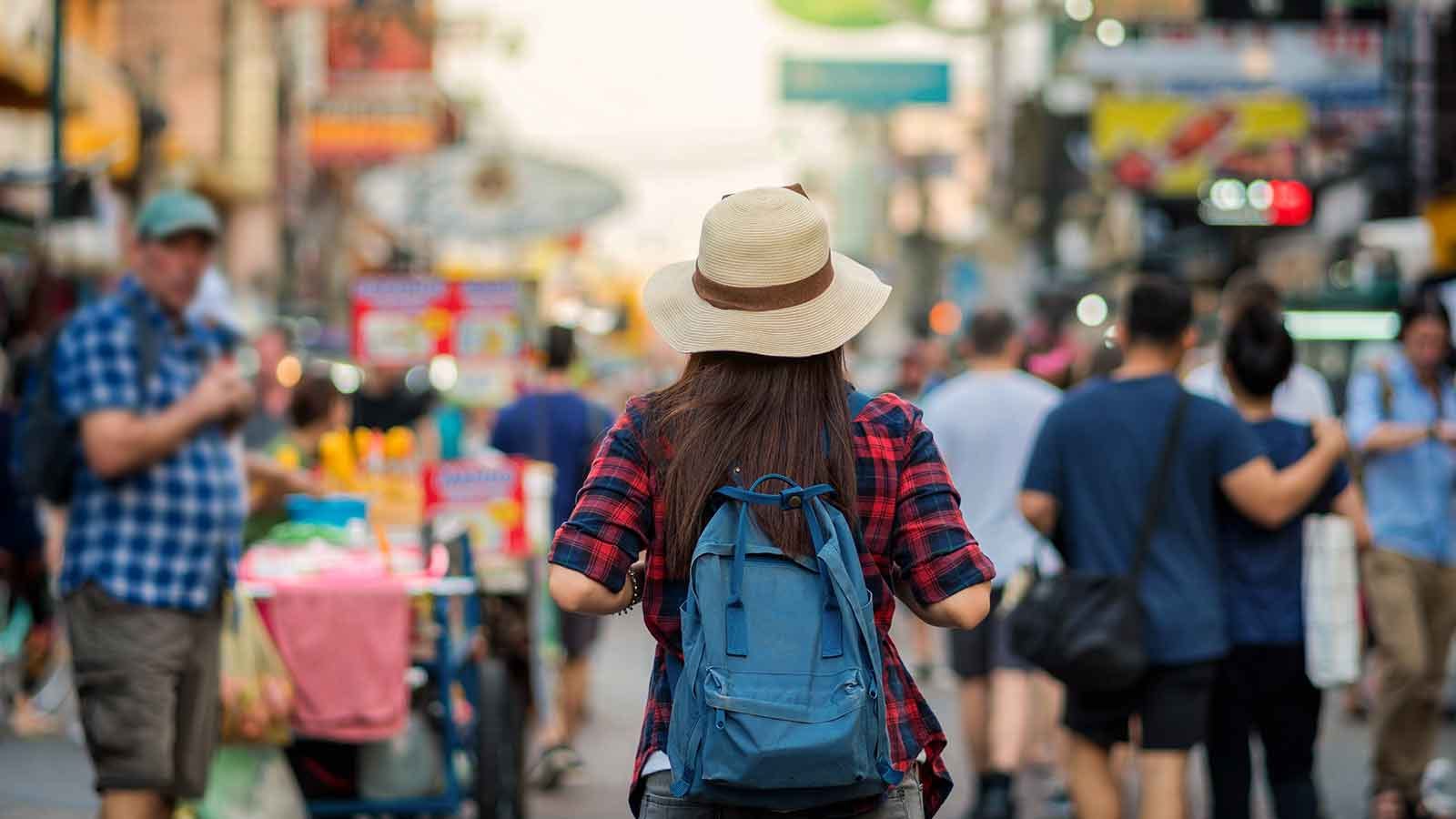