Thanks to smartphones, people now take over a trillion digital photos each year. Whether you print your pictures or save them digitally, organizing all of them can seem like an impossible task.

However, there are good reasons you might want to organize your family photos. When you can find your photos quickly, it’s much easier to save, share, post, or print them. An organization system ensures those pics you love from that one vacation won’t be buried in the depths of your smartphone or attic, never to be seen again.

Whether your family includes children, significant others, pets, or a group of super-close friends, here’s how to organize those photos, so you can easily access your memories for years to come.

How to Organize Digital Photos

When you think of organizing photos, your mind probably first goes to a pile of glossy prints waiting for a home in a photo album. But for many people today, the vast majority of their photos are on their phone, computer, or online. So, let’s start with how to sort out those digital pics.

A good place to start is by changing your photo habits. One of the most helpful practices you can adopt to organize your digital photos is to delete pics regularly.

This doesn’t mean you have to get rid of any images you like. But anytime you take a large set of photos, take a few minutes that same day to look through them and delete the bad ones. Any images that are blurry, unflattering, too dark, or otherwise not worth keeping, you can delete right away, so your phone doesn’t get cluttered with subpar photos.

Anytime you have a few free minutes—such as waiting in a doctor’s office or at the airport—scroll through some of your older photos and delete the bad ones. Reducing the sheer quantity of images you’ve saved makes the rest of them easier to organize.

Your smartphone and computer both let you put photos into albums. Use that tool regularly! Name the albums something specific, such as “Trip to Atlantic City,” and consider adding dates to each one, so you know when it happened.

You can also use albums to organize your photos in any way that feels logical to you. For example, you could give each family member an album on your phone, so you can quickly find a specific photo of that person when you need it. Or, you can organize photos into albums by month and year, so you can easily find an image based on the date.

If you already have thousands of photos on your phone or other devices, organizing them can seem nearly impossible. However, there’s lots of photo organization software that helps automate part of the process.

Experiment with a few options until you find one that works for you. We especially like Mylio. It’s free, syncs photos from different devices and platforms, and organizes them by date with your calendar app. It can even sort your photos according to who’s in them with face recognition software.

Have a Backup System

No matter how or where you organize your digital photos, always have a backup system. You can upload your photos to the cloud or save them on an external hard drive. It’s often tempting to think of digital images as permanent. But if you only save them in one place, there’s always a risk they could get permanently lost or deleted. Having multiple backup systems is also a good idea. For a serious look at multilayer photo backup strategies, check out the guide to bulletproof photo backups on our sister site How-To Geek.

It takes both time and diligence to organize your digital photos. At first, you might need a few hours a week to get your pictures in order. Try to stay on top of sorting, deleting, and backing up each new photo you take.

It’s up to you how much time and energy you spend on this project, but it can take some effort to organize your whole photo collection. You can also hire a professional photo organizer if you want someone to take the work off your hands.

How to Organize Printed Photos

For most people, digital photo organization is the most daunting task, since digital photos tend to pile up faster than printed ones. But if you often print out your pictures or have an extensive collection from the pre-smartphone era, you might want to get those in order, too.

To organize physical photos, you can start by collecting them all in one place. Pull the old boxes, envelopes, and albums of photos from wherever they’re hiding, and put them in one location so you can see what you’re working with.

Now, sort through your photos one by one and decide which ones to keep. Just like your digital photos, you can get rid of any bad or meaningless pictures, or duplicates (it’s a good idea to save the duplicate of photos you really love, though).

Finally, sort through each pile and decide how to organize it. For example, you might want to separate photos by date, location, or who’s in them. This way, when you put them into albums or boxes, they’re in a logical order.

As you sort your photos, take care to only touch the edges as much as possible. Otherwise, the oils from your fingers can gradually degrade the photo. You can also wear gloves during this task.

If you’re planning on scanning your print photos so that you can have digital copies, consider organizing them into albums (or archive boxes) that have a place for you to write notes next to each photo. That way, you can pull out your favorites, scan them, and make a note that you did so. Working in small batches, you can get all your best pictures into digital format over time.

Put Your Photos Away

Now, it’s time to put your photos where they belong according to how you sorted them.

If you use albums, use the ones with clear plastic sleeves rather than adhesive pages, as adhesive damages photos over time. For box storage, you can get archival photo boxes to keep them safe. Keep in mind that albums take up far more space than boxes.

Store your photos somewhere cool, dry, and dark, so they last longer. If you hang a photo on your wall, try to keep it out of direct sunlight, which fades colors.

Organizing your family photos is no small task, so break it up into sections—don’t try to do it all in one day. Once you’re done, maintaining the organization of your new photos won’t be hard. And the satisfaction of completing this organizational challenge can be well worth it!

For ideas on what to do with your photos after you’ve got them sorted, don’t miss this post. 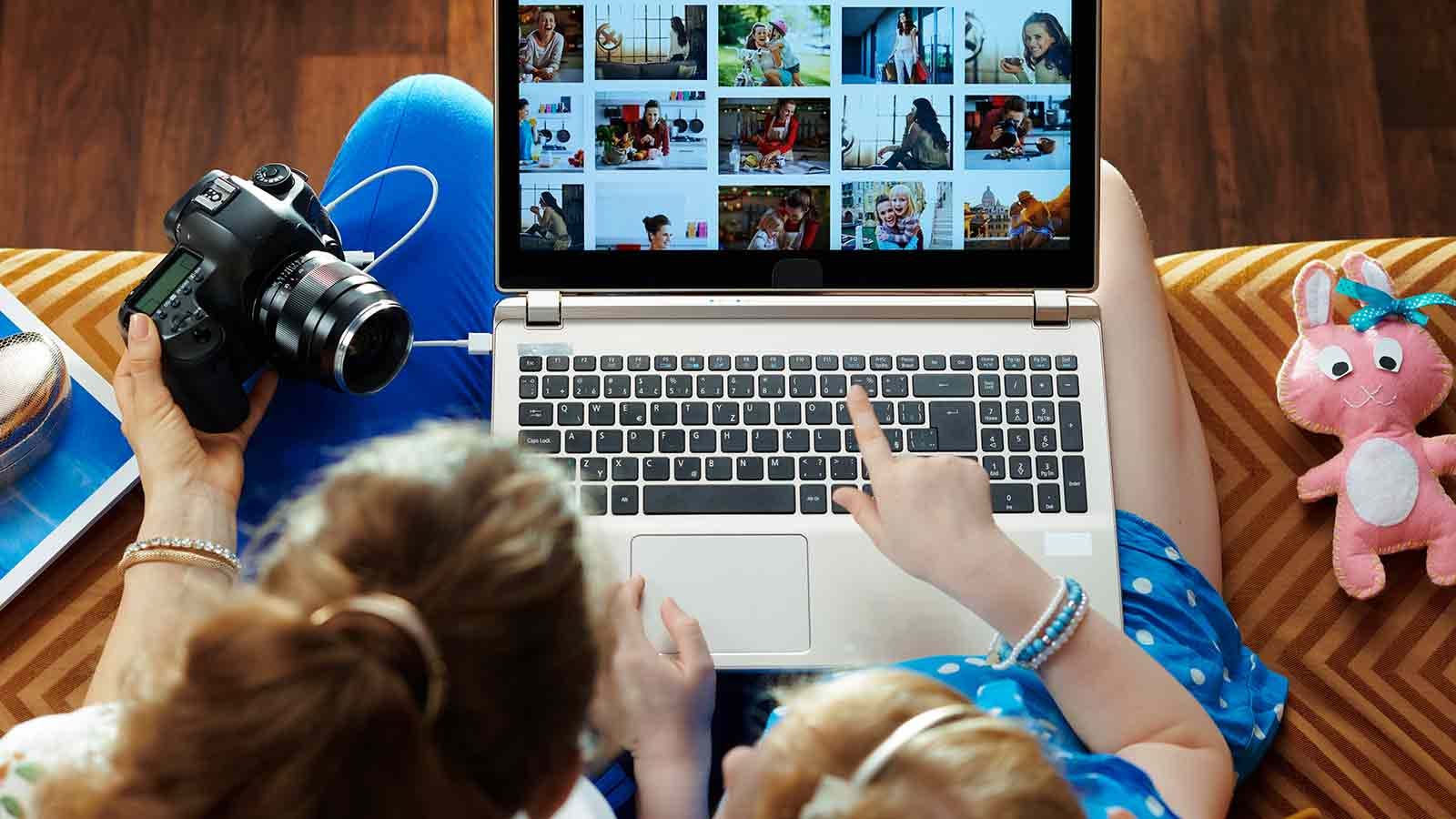