How did a simple baked feta pasta recipe become so famous overnight? TikTok, of course! It even caused a shortage of feta cheese in Finland. Naturally, this has sparked many a kitchen creative to come up with their own version, so we’ve found the 10 most tempting variations on this cheesy theme.

The viral TikTok video that brought the recipe to U.S. audiences from Finland is a perfectly married blend of cherry tomatoes, baked feta, and pasta. It’s quick, easy, absolutely delicious, and doesn’t need any changes.

Of course, that hasn’t prevented foodies from tweaking and adding their own personal touches. But, no worries! We’ve done all the hard work for you and found the 10 best baked feta pasta recipes!

If baked feta with pasta sounds like the perfect combination, but you’re not a fan of cherry tomatoes, this baked feta mushroom recipe will be the perfect option for you. It features a mix of shiitake and brown-button mushrooms, red onions, purple garlic, spinach, and even pine nuts, which bring in an earthy, rich flavor.

The creator of this dish recommends using Persian or Bulgarian feta as she finds it creamier and less salty than Greek, but you can use whichever variety you prefer.

Get the Recipe: Cooking With Ayeh

Looking for a low-carb version that still tastes like the real thing? This baked feta with spaghetti squash recipe won’t disappoint! Using sweet, nutritious spaghetti squash, the creator of this recipe wanted to make it gluten-free and bring some extra fiber to the table, without sacrificing taste.

According to the many positive comments on her blog, it appears she succeeded!

Get the Recipe: Eating Bird Food

Curious about how to add some protein to this famous recipe? With chicken, of course! This food blogger decided to slice up some chicken thighs, then marinate them in paprika, sea salt, oregano, and basil. This Mediterranean mix of spices pairs really well with feta cheese.

She also used less olive oil than the original recipe to lose some calories. All that’s left to do is try it!

Get the Recipe: Slimming Eats

Baked Feta with Tomatoes and Chickpeas

Adding chickpeas to this baked feta recipe makes it hearty and rich, while also packing it with fiber, protein, and a plethora of micronutrients. If you’re looking for a pasta replacement to get some carbs, this foodie recommends getting (or making) some fresh, herb-filled focaccia to scoop up the delicious sauce. Yum!

Get the Recipe: Smitten Kitchen

Although baked feta is the star of this dish, it didn’t take much time for someone to come up with a vegan version that tastes just as good. It’s packed with flavor and calls for Violife vegan feta cheese and gluten-free, lentil-based pasta, making it perfect not only for vegans, but also for those who are gluten intolerant.

Bacon lovers must try this version of the famous baked feta pasta recipe! Bacon makes the perfect crispy topping for these delicious ingredients. The creator of this recipe also uses spinach, sour cream, Parmesan, and thyme to make it burst with flavor.

Get the Recipe: Simply Delicious

Adding extra protein to a recipe can also come in the form of seafood. This version features shrimp and whole raw garlic. It’s quite different from the original, but absolutely scrumptious!

This one is also gluten-free, but you can, of course, add any kind of pasta you want—the shrimp-cheesy sauce will go well with anything!

Get the Recipe: Mary’s Whole Life

Add a Spanish twist to your baked feta by adding some chorizo sausage to the mix. This recipe also calls for black olives, red chilies, baby spinach, balsamic vinegar, and chili powder. All of this elevates the main ingredients to a whole new level!

If you’re a fan of chorizo, you don’t want to miss out on this delicious iteration.

Get the Recipe: Not Quite Nigella

The popular TikTok recipe quickly made its way to many different countries and, therefore, cuisines. This Middle Eastern version satisfies all cravings.

It calls for shallots, thyme, harissa, and parsley, athen you drizzle some honey over the whole dish right before you put it in the oven. This creates a perfectly caramelized sauce for a silky smooth, creamy pasta dish.

Get the Recipe: The Lemon Apron

Another low-carb version of the baked feta pasta recipe comes in the form of zucchini noodles (or zoodles). The rest of the recipe follows the original, so there’s no fear of altering the taste.

The only thing that’s different is the number of carbs (and calories) you’ll be consuming, so this version can easily fit into every diet or meal plan!

Get the Recipe: Keto Karma

Ready to discover your favorite version of the recipe-of-the-moment, baked feta pasta? Start from the beginning of our list, then mix it up to create some of your own! 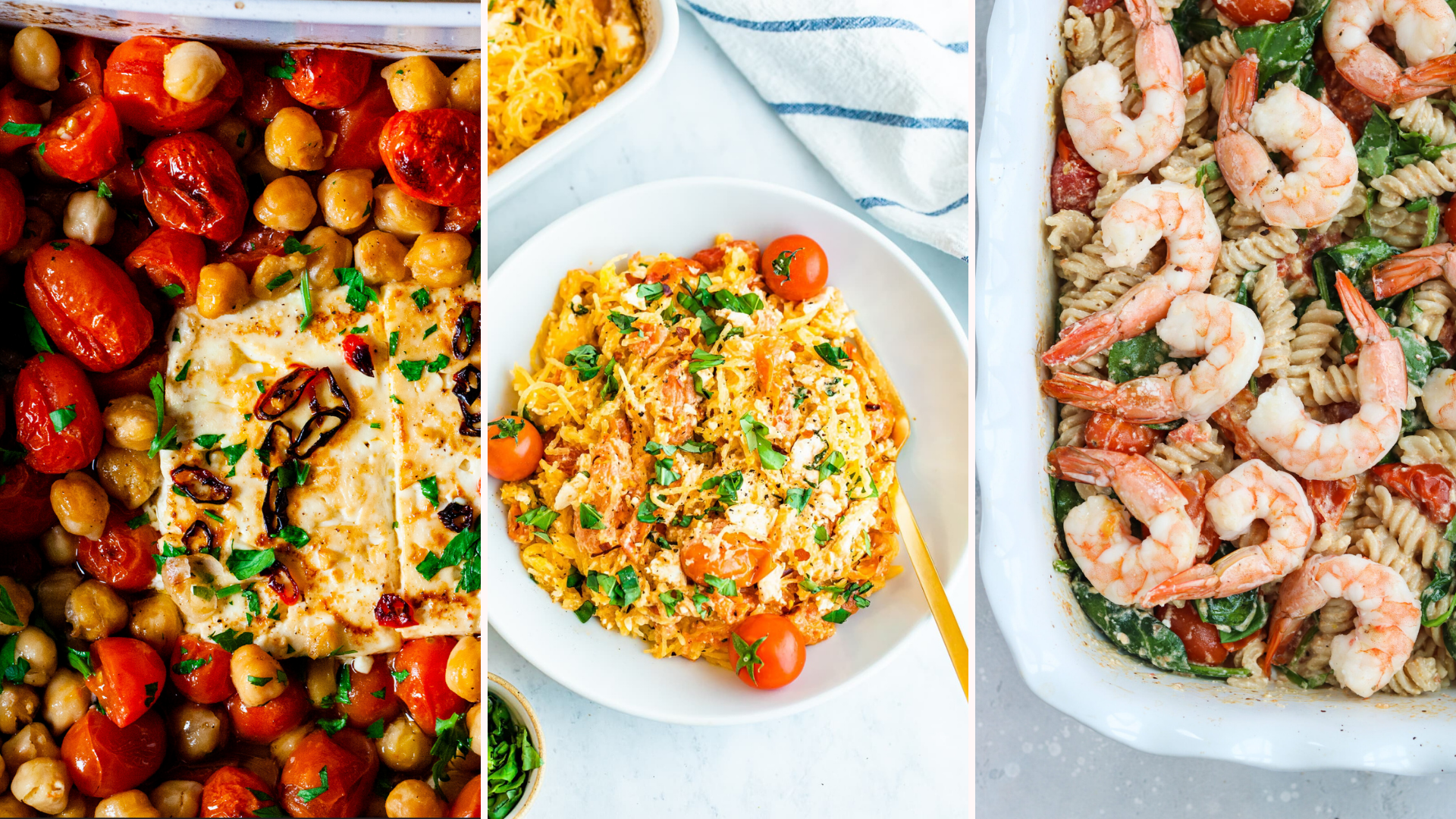