St. Patrick’s Day is just around the corner. For many Americans, this holiday is the perfect reason to dress in green, drink beer, and party all day. This year, mix it up and add a little authenticity to the celebration with these delicious dishes.

Before we get into the recipes, it’s always fun to pepper in a little holiday trivia when talking about culinary traditions—let’s talk about the history of St. Patrick’s Day. Held every year on March 17, this holiday celebrates Saint Patrick, the patron saint of Ireland. He is credited with bringing Christianity to the country and performing miracles. Here are a few facts about the holiday:

If you want to hold your own feast this year, start with some of these popular dishes!

This quick bread gets its name by using baking soda instead of yeast as a leavening agent. The final product has a dense, moist filling with a crispy crust.

Raisins are a common add-in, but these are completely optional. It’s unbelievably comforting with some warm butter spread on top and serve it as a side to a warm stew.

Soda bread is a type of quick bread, by the way, so if you like the speed with which this recipe goes from the mixing bowl to table, do check out these other great quick bread recipes.

What Irish recipe list would be complete without a hearty stew? While lamb is a favorite in Ireland, this version had been adapted to use beef and better meet the needs of Americans—lamb stew is good but depending on where you live, you might have a hard time finding the meat.

You’ll also find Guinness for a kick of malty flavor to compliment the meat and root vegetables. The cook time requires two long periods of simmering, but it brings out a rich flavor that is worth the extra time and shines through in every bite.

This is a childhood favorite for many people growing up in Ireland. Just like apple pie in the U.S., this dessert seems to magically appear on the table when friends and family come together.

Instead of using cinnamon and other spices in the filling like an American apple pie, this tart only adds sugar to bring out the sweet apple flavor. What better way to experiment with a variation on the apple pie than with this grandmother-approved recipe?

This quintessential dish originated in the United Kingdom and is popular throughout England, Ireland, and Scotland. It consists of a rich stew topped with mashed potatoes and broiled until they’re crispy.

Shepherd’s pie is traditionally made with ground lamb. This recipe calls for ground beef (which technically makes it a cottage pie) but you can use lamb if you want the most authentic version.

This is a traditional Irish potato pancake. An old Irish rhyme goes: “Boxty on the griddle, boxty on the pan; if you can’t make boxty, you’ll never get a man.” We hardly think your romantic fate is tied to your culinary skills, but boxties are so delicious you can’t go wrong learning how to make them!

Recipes vary by region, but every one contains finely grated raw potato, flour, and some seasoning. This version is simple and can be paired with a variety of toppings.

Get the Recipe: Chowhound

Although it’s a well-known Irish dish, corned beef and cabbage is actually an adaptation of American origin. The original Irish dish is bacon and cabbage, but Irish immigrants began using beef because it was cheaper and easier to use than bacon in the United States.

Both because it was created by Irish immigrants and because the millions of children, grandchildren, and great-grandchildren of those immigrants grew up eating the dish and associating their Irish heritage with it, corned beef and cabbage have a more than honorary place on this list.

This recipe adds potatoes and carrots for a well-rounded and delicious meal. It can also be made in a slow cooker for an easy family meal.

This classic recipe consists of mashed potatoes mixed with kale or cabbage. Although served as a St. Patrick’s Day dish in the United States, it is regarded as more of a Halloween dish in Ireland.

Historically, small trinkets with symbolic meanings would be hidden inside for the person enjoying the dish to find. While what the little charms meant varied regionally, most of the superstitions around them related to marriage. Buttons, thimbles, rings, and coins were common trinkets—finding them foretold of whether or not marriage and wealth (or not!) was on the horizon.

Seafood is a big part of culinary culture in the British Isles and different versions of seafood chowders are very common in Ireland. You’ll find it, with many variations, in many pubs and restaurants.

This version contains white fish, salmon, prawns, and crab meat. You can use whatever is local and fresh in your area. Pair it with a slice of Irish soda bread for a comforting meal.

Get the Recipe: Gav’s Kitchen

This is a traditional northern Irish fridge cake. It’s usually made with crushed-up digestives, marshmallows, and other sweet treats lying around. (This recipe uses glacé cherries.)

Digestives, if you’re a bit confused by the ingredient, are a type of wheat flour bisquit originally created in Scotland. They are called “digestive biscuits” because it was believed the sodium bicarbonate in them aided with digestion. That might of been a bit of wishful thinking, but they are tasty and you can still buy them today!

In this recipe, all the ingredients are pulled together with condensed milk and left in the fridge to set. They’re popular at kid’s parties or for a yummy dessert anytime. It looks fancy but the dump-set-and-go approach makes this no-bake treat the easiest thing on our list to throw together.

Get the Recipe: Adore Foods 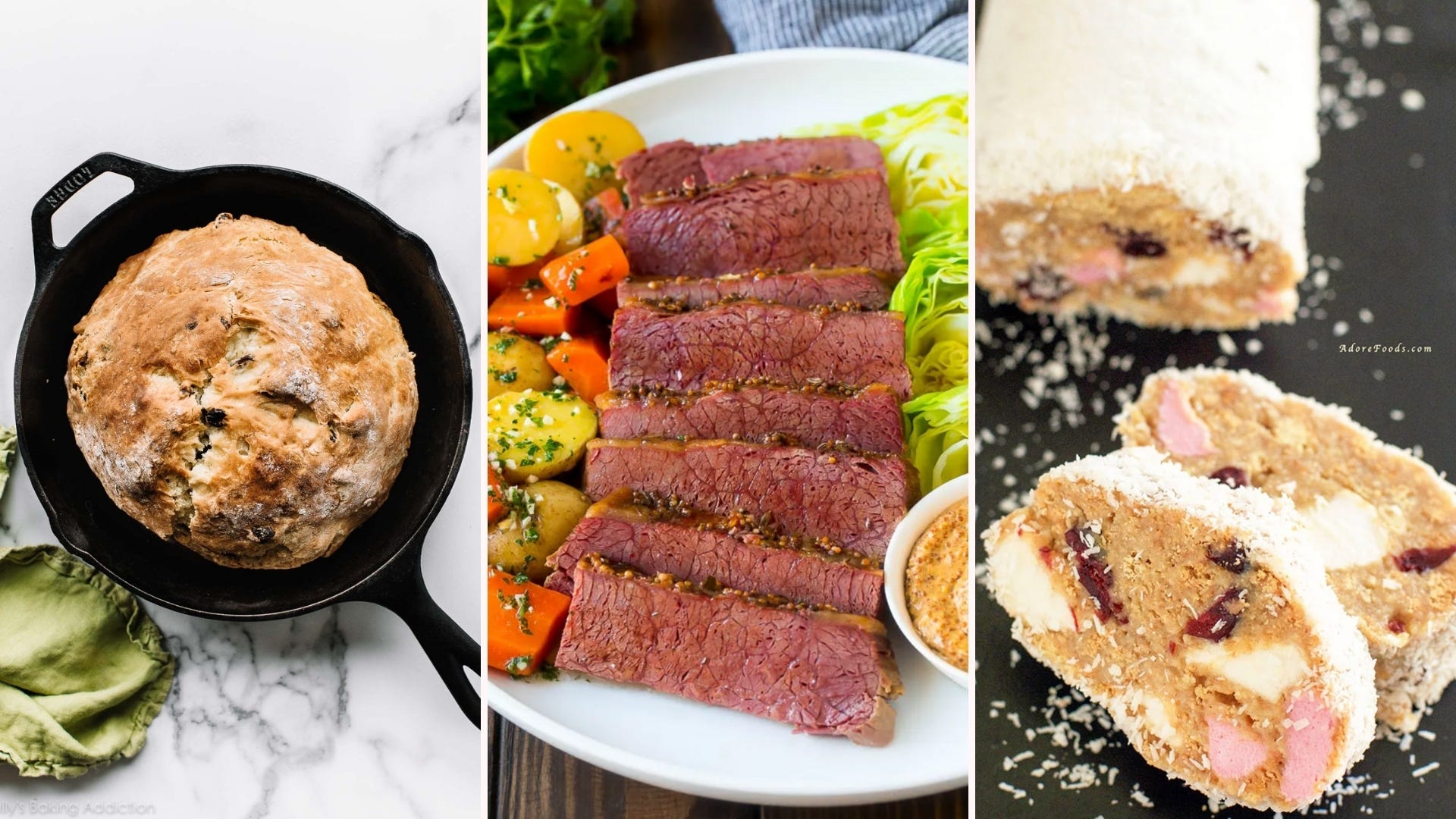