The burrito is a much-beloved Mexican dish that’s also incredibly popular in the United States. The classic bean, cheese, and meat filling combo is perfect as-is, but we’ve rounded up some fun variations on this classic that are sure to please!

The burrito got its start in Chihuahua, Mexico, in the 19th century. The word means “little donkey” in English. Some think it got this name because it resembles the rolled packs carried by working donkeys.

Whatever the true story is, these tortilla-wrapped morsels have also become a U.S. staple. From Japanese-style to one made completely from candy, here are some fun new burrito recipes to try.

Yes, you can argue that a sushi roll is already *technically* a burrito. Or you can argue that with the absence of a tortilla, this recipe isn’t a burrito at all. But for the sake of sharing a great recipe, we’re making the call that this dish meets all the qualifications to be in this article.

In addition to traditional Japanese ingredients like seaweed and rice, this recipe adds chicken with Mexican flavors and homemade guacamole for a southern influence. Watch the video included on the page for the best sushi-rolling technique, which can be hard to master if you haven’t done it before.

And be sure not to overstuff your rolls or you won’t be able to seal them properly and everything will fall out when you go for a bite. Learning to make sushi at home is a great skill to have. When you’re not making burrito inspirations, rolling sushi can become a fun date night or a way to save some money on takeout.

Get the Recipe: Healthy Nibbles

Your go-to Thai order may not Pad Thai or red curry anymore after trying this recipe. These burritos pack a punch of Southeast Asian flavor with baked peanut tofu, black rice, and sriracha. Black beans, avocado, and tortillas add the Mexican flair while sliced carrots, cabbage, and cilantro bring all the flavors together beautifully.

Feel free to make an extra serving of the peanut sauce if you like to dunk your burritos in it before every bite (which is completely acceptable). The sauce calls for red curry paste for added Thai flavor and a kick of spice, but you can add some sriracha if you like your peanut sauce nice and spicy.

The tofu can be baked right after you take it out of the packaging, but if you press it for s few hours first, you’ll get a crispier bake. You can do this by placing the block of tofu on several sheets of paper towels, then place more paper towels and a clean dishrag on top.

Then, stack one or two books on the tofu tower and let sit for several hours. This will gently press out the excess moisture from the tofu so it doesn’t feel watery or soggy when you bite into it after it’s been cooked.

Get the Recipe: Feasting at Home

Whoever invented the breakfast burrito was a genius. While the filling options are limitless, this recipe has found an ingredient compilation close to perfection. The combination of sausage, cheese, eggs, and a fresh avocado salsa pulls together a burrito that is both indulgent and satisfying.

Ingredients here are easy to swap out, so feel free to substitute the spicy sausage for a sweeter variety or the Monterey Jack cheese for a different kind.

These burritos can be made a few hours ahead of time and refrigerated before cooking. They reheat well, but the eggs and avocado won’t thaw perfectly after freezing, so it’s best to avoid that make-ahead route. These are perfect for a nutritious breakfast, fun dinner, or sent in your kids’ lunches with them to school.

Korean barbecue is a popular cooking method in Korea that results in deliciously tender and flavorful beef, chicken, and other meats. If you’ve ever been to a Korean restaurant, chances are you or someone in your party has ordered a dish with some version of this.

This burrito recipe takes classic Korean barbecue flavors and combines them with other pairings from the cuisine like kimchi and cilantro. Mixed with rice, fresh herbs, and a big dollop of sriracha mayo, this burrito is what Korean cuisine dreams are made of.

The author does note that her Korean barbecue recipe does not actually contain grilled meat, because she found that slow cooking the meat offered a better flavor. However, if you want to retain a more authentic flavor, skewer the beef and cook it on a grill after coating it with the sauce.

And for all the parents and meal-preppers out there, these freeze beautifully for up to three months!

Get the Recipe: Pinch of Yum

Do you ever get in that mood where you want to eat a bucket of sugar with no regard to how your body will handle it? This burrito is for that mood. This Instagram-worthy creation is simple to make and can be customized with pretty much anything you want.

All you have to do is flatten out cotton candy to form a tortilla shape and fill it with whatever sweets you want.

This recipe keeps it simple and calls for ice cream and sprinkles, but the sky’s the limit when it comes to fillings. You can use ice cream, frosting, jelly beans, cereal, or whatever else meets that day’s cravings.

Avoid using anything too liquidy as it can melt the cotton candy and seep through your burrito. (Ice cream concoctions will need to be eaten immediately for this reason.) Store-bought cotton candy tends to work the best because it comes in tightly packed lumps that make a thicker wrap.

These burritos are the perfect addition to a birthday party, baby shower, or other celebration that lends well to sugary treats and bright colors.

Get the Recipe: Life Begins with Dessert

If you’ve never had Vietnamese pho before, take a break right now to order some. Pho is a soup made with rice noodles and the richest most complex broth you’ve ever tasted in your life. It’s usually served with meat, Thai basil, bean sprouts, and jalapeños, among other toppings.

Once you’ve tried pho and decided it’s incredible and you want those flavors in everything you eat, go ahead and make this burrito.

The trick here is cooking the meat in pho broth to infuse the quintessential flavor into a dry dish. Once the meat has been properly seasoned, it’s stuffed into a tortilla with cooked rice noodles, bean sprouts, Thai basil, cilantro, and chili-garlic sauce.

Keep in mind that fresh jalapeños are pretty spicy, so go easy on them if you don’t want to burn your tongue. You can find most of these ingredients in your regular grocery store. Thai basil is a little trickier to locate, but a visit to an Asian grocery store should do the trick.

Get the Recipe: AllRecipes

What’s the difference between a burrito and a wrap? No one really knows, but this may be a rectangle-square argument. Burritos, usually made with a large number of Mexican ingredients, can qualify as a wrap. Wraps, on the other hand, tend to be smaller and wouldn’t necessarily qualify as a burrito.

That being said, we’re adding these Greek chicken burritos/wraps to this list because whether they’re truly a burrito or not, they are delicious. Stuffed with traditional Greek flavors like pickled onions, tzatziki sauce, and feta cheese, these are easy to pull together and perfect for a weeknight meal.

Many components like the chicken and tzatziki sauce can be made ahead of time for easier prep.

Get the Recipe: Mel’s Kitchen Cafe

This list wouldn’t be complete without an All-American, truly southern spin on the burrito. This recipe delivers with mac and cheese stuffed in a burrito and topped with a killer barbecue sauce. What’s better than that?

While this post creates a vegan version, you are well within your rights to use real cheese if you’d like. Heck, add bacon and deep fry the whole thing if you want, there are no rules when we’re working with macaroni and barbecue sauce.

Which brings us back to the true beauty of burritos—they’re the ultimate customizable dish. You can generally add or omit whatever you want, regardless of the recipe.

Get the Recipe: spabettie 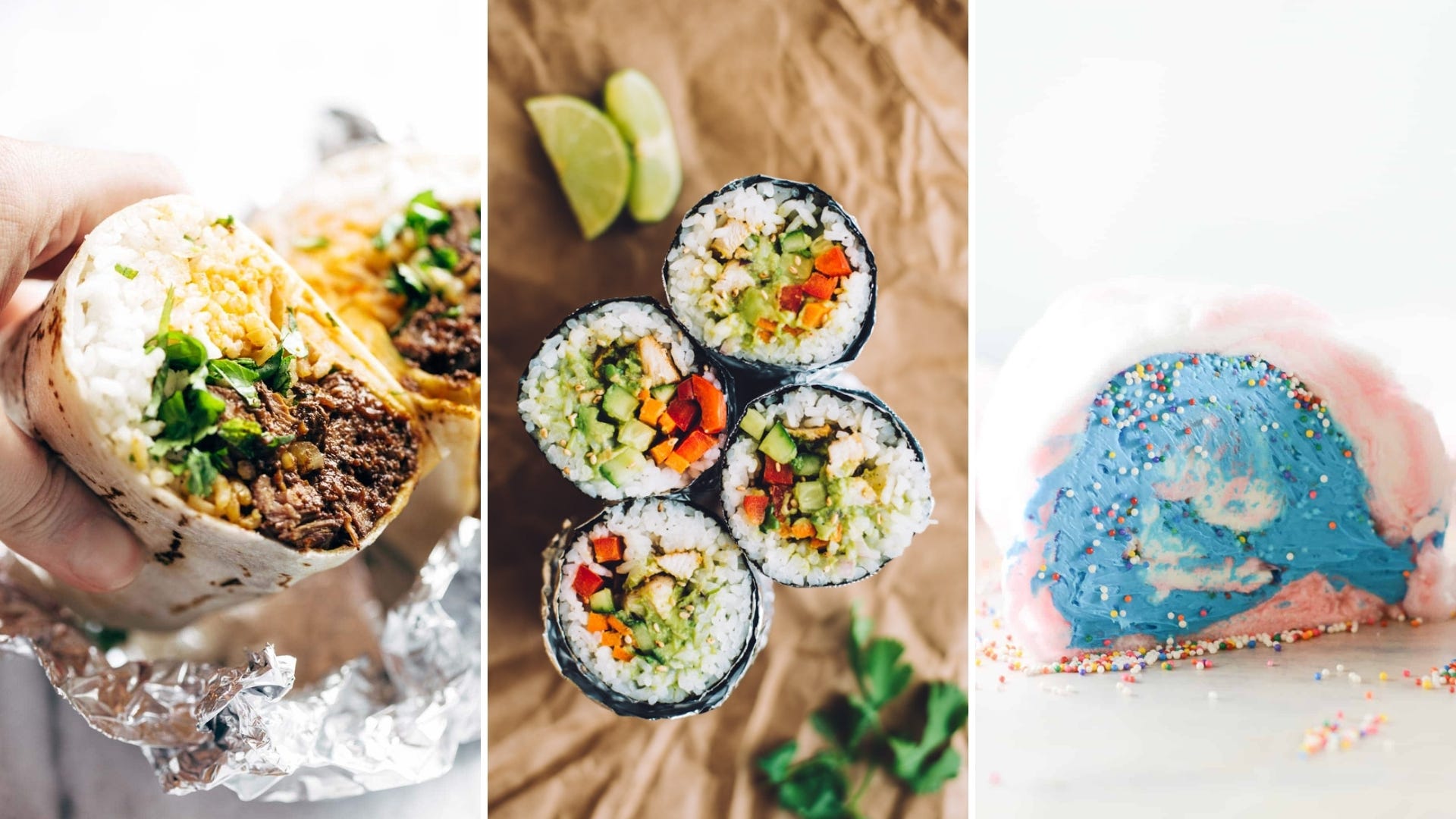