The 2021 Oscars are scheduled for April 25, which means there’s still plenty of time to catch up on some of the year’s most-nominated and most talked-about movies!

This year’s Oscar nominees feature a blend of flashy projects with all-star casts and more independent-minded movies with up-and-coming performers who are making a huge impact. For the most part, the Oscar-nominated movies from this year are already available for home viewing, whether through deals with major streaming platforms or as on-demand titles.

Ahead, we’ve rounded up all the nominees that you should be keeping an eye on this year and how you can watch them. All the movies with nominations in the major categories are included, along with a few critically acclaimed gems that didn’t quite make the cut in the big categories but snagged some smaller nods.

Based on a French stage play, The Father is a drama about an elderly man slowly dealing with memory loss. As a result of his decreasing capacity, he has to move in with his daughter, revealing the complicated relationship between the two of them.

The Father is one of the later streaming additions on our list but should be available on Amazon Prime and other services as of March 26.

Judas and the Black Messiah

In late 1960s Chicago, a young man named William O’Neal was recruited by the FBI to infiltrate the Black Panther Party, eventually assisting the agency in a plan to assassinate the BPP’s charismatic young leader, Fred Hampton. This true story is the basis of Judas and the Black Messiah, which focuses on O’Neal’s life and his relationship with Hampton.

Judas and the Black Messiah was available simultaneously on HBO Max and in theaters until March 14; it will return to the platform at some point in the future but is currently only available in theaters. Based on typical streaming release patterns, expect it to resurface on streaming platforms in May.

Every year has to have at least one movie about moviemaking, and this year’s is Mank. The biographical drama follows Hollywood screenwriter Herman J. Mankiewicz as he developed his most famous screenplay: Citizen Kane. The authorship of Citizen Kane has long been one of cinema history’s most famous controversies.

You can stream Mank on Netflix.

Based loosely on writer-director Lee Isaac Chung’s own life, Minari follows a Korean-American family in the 1980s who move from California to rural Arkansas in search of a new life. As they work to make their new farm a success, their family struggles with wanting different things out of their “American dream” life.

Nomadland is based on a nonfiction book of the same name, exploring a nomadic subculture throughout the United States. After a recently widowed woman loses her job when a factory shuts down, she decides to pack everything up and travel, discovering an entire group of people who have a permanently itinerant lifestyle, moving around the country in search of work and new experiences.

The movie has been nominated for six Oscars: best picture, best director, best actress, best adapted screenplay, cinematography, and film editing. Director Chloé Zhao is the first woman of color to be nominated for best director at the Oscars.

Nomadland is currently available to stream on Hulu.

A revenge thriller with a twist, Promising Young Woman tells the story of a woman who sets out to teach predatory men a lesson after her friend’s brutal assault and murder. When she discovers that one of her targets has a connection to her friend’s case, she takes a huge risk in hopes of finally getting justice—or, if not that, then at least revenge.

When a punk-rock-metal drummer begins losing his hearing, his entire life has to change. Despite the risk of worsening damage, he continues to try to play music, all while navigating the big changes coming to his life and the nuances of deaf culture.

You can stream Sound of Metal now on Amazon Prime.

The Trial of the Chicago 7

The Trial of the Chicago 7 is another movie based on true events. This time, it’s the story of the Chicago Seven protestors, a group of anti-war protestors charged with conspiracy and intent to incite anti-Vietnam War riots at the 1968 Democratic National Convention. The protests, the political climate, and the subsequent trial all are depicted.

The Trial of the Chicago 7 is available for streaming on Netflix.

Based on an August Wilson play, Ma Rainey’s Black Bottom follows a dramatic recording session in 1920s Chicago, featuring famed blues singer Ma Rainey and the musicians and music executives around her. Personal conflicts explode into life-changing incidents and collide with questions of race and art, all over the course of one night.

You can watch Ma Rainey’s Black Bottom on Netflix.

The United States vs. Billie Holliday

Jazz singer Billie Holliday becomes the target of a government sting operation as part of the effort to racialize the war on drugs. The efforts come in tandem with Holliday’s release and performances of her legendary song “Strange Fruit” about the legacy of racial violence.

The United States vs. Billie Holliday is available for streaming on Hulu.

Pieces of a Woman

Following a tragic accident during a home birth, a woman’s life is turned upside down. As she struggles with growing distance from her mother and her husband, she also has to deal with her own devastating grief and decide how to handle legal proceedings against the midwife who she blames for the tragedy.

You can watch Pieces of a Woman on Netflix.

One Night in Miami

Based on Kemp Powers’s stage play, One Night in Miami imagines a fictional meeting between four Black American icons: activist Malcolm X, boxer Muhammad Ali, football player Jim Brown, and singer Sam Cooke. The movie imagines a meeting between the four of them, celebrating one of Ali’s wins and discussing their different views on race and activism.

One Night in Miami can be streamed on Amazon Prime.

The sequel to the satirical mockumentary Borat again chronicles the outrageous misadventures of the fictional Kazakh journalist, this time with his teenage daughter Tutar. The “plot” follows Borat as he attempts to marry off his daughter as a “gift” to a prominent American political official, only for Tutar to rebel and run away.

The movie has been nominated for best supporting actress and best adapted screenplay.

Borat Subsequent Moviefilm is available to stream on Amazon Prime.

Based on a memoir by J. D. Vance, Hillbilly Elegy traces the ups and downs of a rural American family as they struggle with poverty, addiction, family feuds, and more. Over the course of three generations, the family members continually fall into similar cycles, despite attempts to escape and change for the future generations.

The movie received two nominations, for best supporting actress and makeup and hairstyling.

Hillbilly Elegy can be streamed on Netflix.

Based on Aravind Adiga’s novel, The White Tiger follows a working-class man from a poor Indian village as his job takes him into contact with some of the most powerful people in the country. As he works his way up as a chauffeur for a wealthy family and, eventually, an entrepreneur of his own, he encounters the realities of the class disparities and becomes frustrated with the inability of so many to escape poverty and oppression.

The movie received one Oscar nomination, for best adapted screenplay.

The White Tiger is available for streaming on Netflix.

After the Vietnam War, a group of Black American veterans return to Vietnam looking to recover two things: the remains of their fallen leader, and the treasure they once buried there. Their mission goes sideways as they’re forced to confront their own traumas, as well as the ongoing dangers still present in Vietnam.

Only the movie’s original score received an Oscar nomination.

Da 5 Bloods is streaming on Netflix.

The latest adaptation of Jane Austen’s novel is a bright comedy about a wealthy and self-centered young woman who decides she has a talent for matchmaking. When she blithely tries to arrange relationships among her social circle, she winds up causing more problems than she solves and has to learn a little bit of humility and compassion.

Emma was nominated for two Oscars: best costume design and makeup and hairstyling.

You can stream Emma on HBO Max. 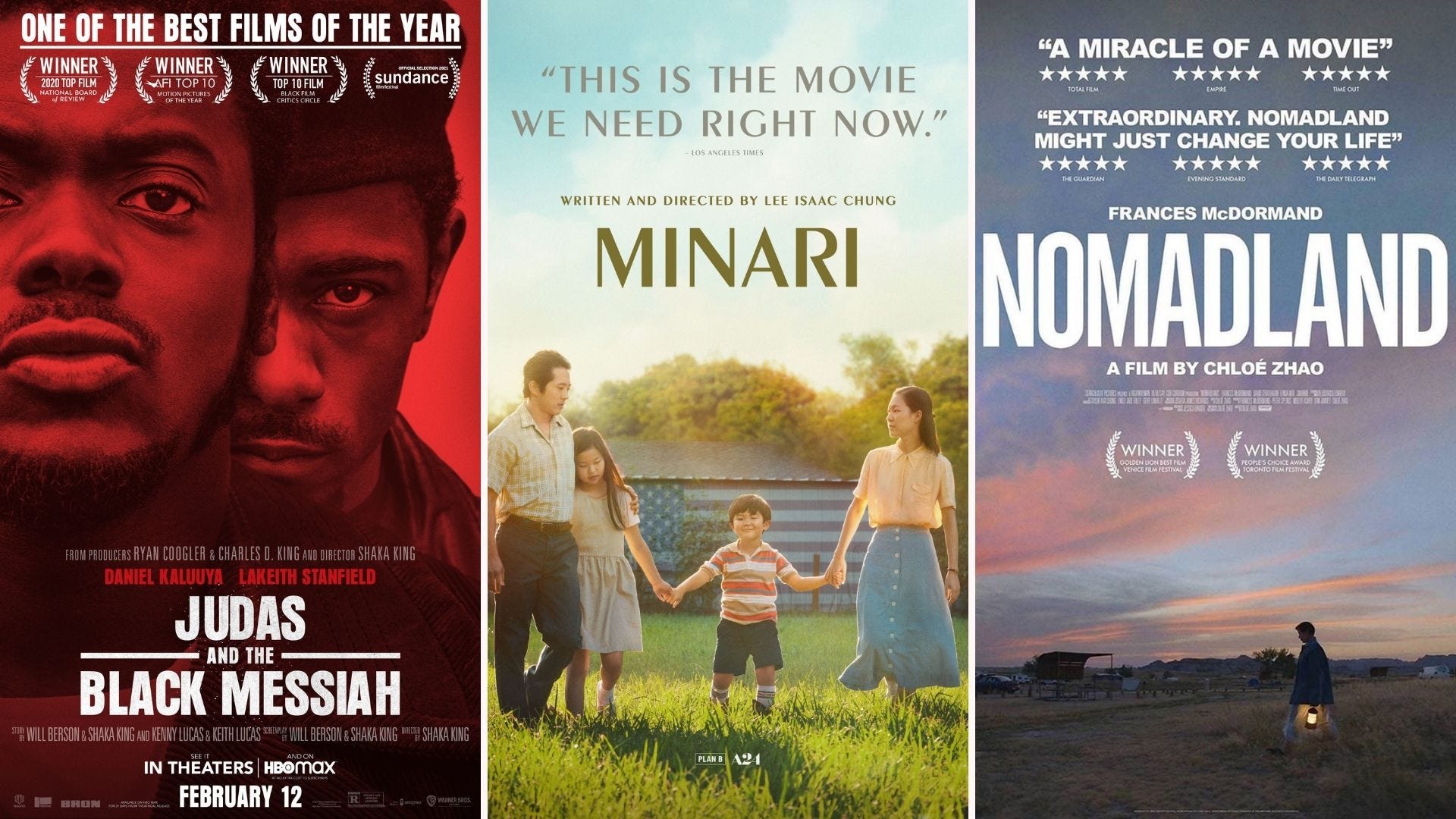