Cooking with fruits and vegetables that are in season is the best way to make your food as fresh and flavorful as possible. We’ve rounded up some of the best recipes to make with in-season produce in April.

So what’s in season in April? The exact list will depend on the time of the month and where you live. But generally, you can count on citrus fruits like oranges and limes holding on, as well as papayas and strawberries joining the mix.

Lots of greens are also in season, including arugula and fiddlehead ferns. Finally, you can enjoy some more veggies like leeks, asparagus, peas, rhubarb, and beets. These recipes make in-season produce the star of every dish.

This hummus recipe combines fresh roasted beets with traditional hummus for a fun spring spin. The lemon, garlic, and olive oil from the hummus help to mask the sometimes strong flavor of beets, making this recipe the perfect way to convert any beet-haters you know.

The beets also naturally dye the hummus a hot pink color, which is super fun to serve and eat. Pair this with pita chips and veggies, or spread it on a sandwich for an extra dose of creamy, rich flavor. You can make this recipe with canned or jarred beets, but you’ll get the best flavor and the sweetest beets when they’re fresh.

Get the Recipe: May I Have That Recipe

Rhubarb might be an old-school ingredient that reminds you of your grandmother, but this veggie pairs beautifully with fresh strawberries. Both are in season in April, which makes this month the perfect time to whip up a classic strawberry rhubarb pie.

Rhubarb is prepared using only the stalks (because the leaves are toxic) and looks like pink celery. It’s pretty sour on its own and greatly benefits from the amount of sugar in this pie. Its firm texture also works well with cooked-down strawberries. Piled into a flaky pie crust and topped with some vanilla ice cream? Magic.

This soup is a classic French recipe that’s perfect for a rainy April day. If you’ve never had leeks before, you’ll be adding them to every soup recipe after this. They taste like a cross between a potato and an onion, and you’ll find the largest and most flavorful options while they’re in season.

This simple recipe doesn’t rely on much in addition to leeks and potatoes. All you need is some chicken broth, heavy cream, and spices. Serve it with some fresh bread for the ultimate comforting dinner.

This recipe screams spring. It has asparagus, mushrooms, and leeks, all of which are in season right now. Asparagus in particular can be bitter and small when purchased out of season, so take advantage of the sweet, tender varieties that you can find at the moment.

These ingredients—combined with eggs, milk, and some spices—create a rich, flavorful quiche that can be eaten for breakfast, lunch, or dinner. Oh, and did we mention that it’s piled with gruyere cheese? We bet you can’t eat just one slice.

Get the Recipe: Garlic and Zest

Arugula is a popular leafy green that has a sharp, peppery flavor. It can be intense on its own but works remarkably well on pizza. The sweetness of the tomatoes and the crust perfectly balances out the arugula for a delicious spin on a classic.

It’s important to give your pizza dough plenty of time to rise, so make it at least a few hours in advance of when you want to actually eat your pizza. This allows it to be stretched very thin before it’s baked to give you a crispy crust. This recipe also calls for a pizza stone, but you can use a baking sheet if you don’t have one.

Get the Recipe: Food and Wine

Pea soup might bring images of smelly bowls of goop to mind, but this soup recipe delivers anything but. Fresh peas (don’t even attempt this recipe with canned ones) are sweet and light at this time of year. Combined with garlic, onions, potatoes, and vegetable broth, you’ll get a delicate soup that’s tasty and fresh.

This soup isn’t super filling, so it’s great for a light lunch or paired with plenty of bread. We also think it would go really well with the mushroom and asparagus quiche listed earlier.

Get the Recipe: Vibrant Plate

Papayas aren’t typically found next to apples and bananas in most American kitchens. But this tropical fruit is growing in popularity for its subtly sweet flavor, soft texture, and host of health benefits. (It’s packed with fiber and tons of vitamins.)

Another perk of papayas is that they create a perfect serving boat when the seeds in the middle are carved out. This recipe guides you through the process of filling your papaya with yogurt, fruit, and add-ins like chia seeds or granola. The result is a pretty, healthy, and refreshing breakfast or snack.

Get the Recipe: Minimalist Baker

Fiddlehead ferns are the tightly coiled tips of ferns. They’re only available in the early spring before the plants grow to maturity. They taste like a cross between asparagus and spinach, with a hint of nuttiness.

This delicious tart utilizes fiddleheads and ramps, another plant in season in April, which tastes similar to an onion. Add some cheese, eggs, milk, and a pinch of cinnamon for a tart that’s fresh, rich, and bursting with springtime flavor.

Do note that fiddlehead ferns need to be thoroughly cleaned before they’re eaten because they hold a lot of dirt from the growing process. This recipe shares instructions on how to do so properly.

Get the Recipe: Girl With the Iron Cast

There are so many ways to use fresh strawberries that we had to add another option to this list. These fruit and oat bars are bursting with flavor and offer a perfect way to utilize this fruit at the beginning of its season.

Unlike many baked fruit recipes, the strawberries in these bars don’t need to be cooked down ahead of time. They’re added straight to the pan between an oat biscuit base and crumbly topping before being baked.

Although they soften while being cooked, the integrity of the fruit is kept so that you still get all that natural sweetness and flavor. Prep time is only 15 minutes, so they’re easy to whip up as well.

Get the Recipe: RecipeTin Eats
READ NEXT
Anne Taylor Anne Taylor is a writer with a BA in Journalism and a passion for storytelling. Her work has been published on a variety of websites including Mental Floss and Well + Good, and she recently published her first novel, What it Takes to Lose. When she's not writing, Anne loves to travel (19 countries and counting), spend time outside, and play with her dog, Pepper. Read Full Bio »
Recently Popular
LifeSavvy is focused on a single goal: helping you make the most informed purchases possible. Want to know more? 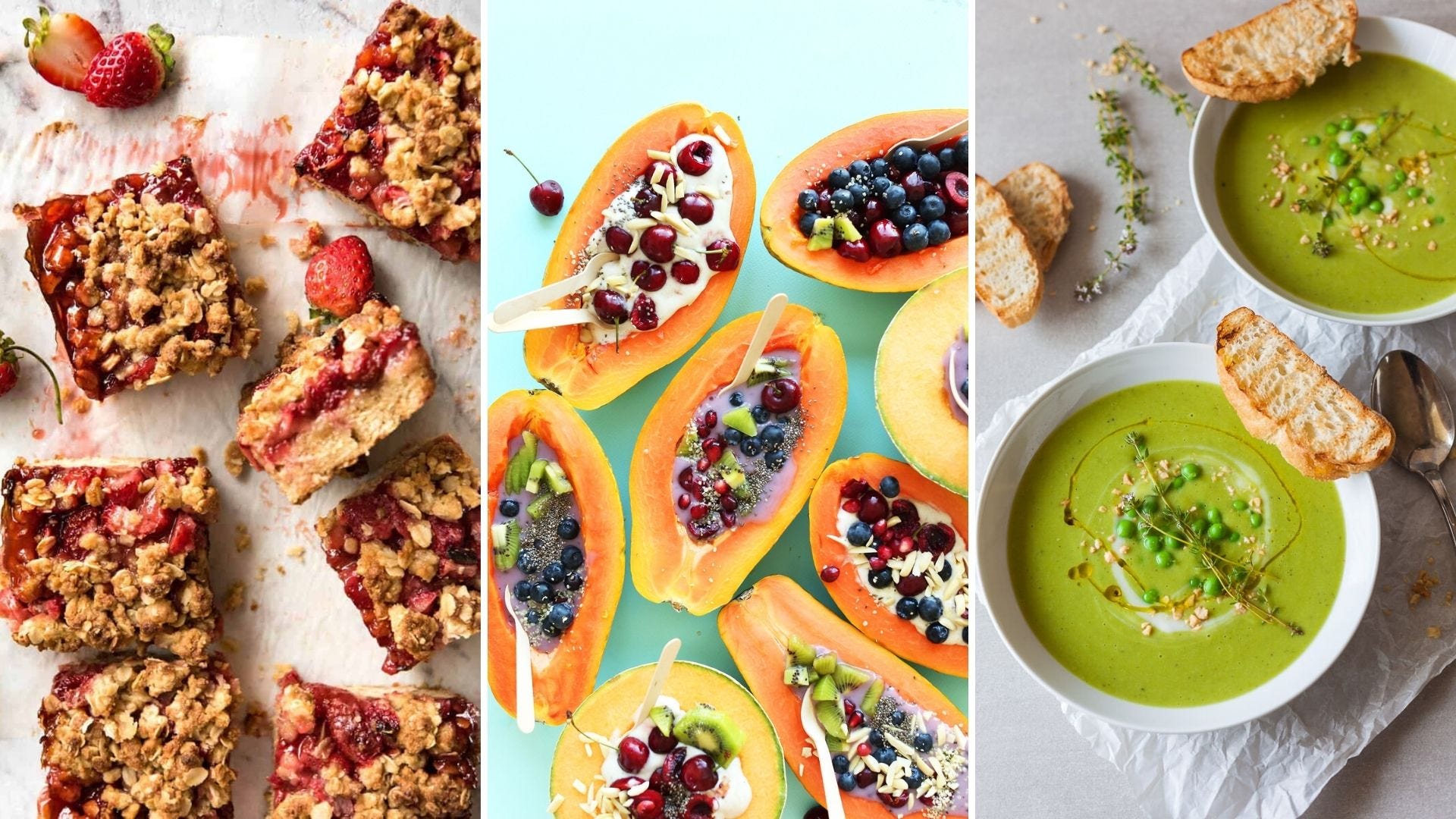