Do you love to dance, love watching others dance, or are you looking for movies with great musical soundtracks? These awesome dance movies are sure to have you singing a tune and tapping your feet.

While there are a plethora of movies out there with dancing in them, the movies added to this list required one of two things—they needed to be about a type of dance or about people who are dancers. This isn’t a list of musicals, it’s a roundup of well-oiled dancing machines. And, if you need an excuse to sit down and watch a good dance movie—as if!—today, April 29, is International Dance Day!

Footloose is a wonderful dance movie that proves that if you want something bad enough, you can make it happen. The movie stars Kevin Bacon as a teen who moves to a new town only to find out that music and dancing are frowned upon.

Rather than accepting the rules, Bacon’s character fights for the right to dance by quoting verses in the Bible about music and dance. He manages to convince the town to let the students host a prom night off city property.

There was a remake done later, but the original is the best. You can check it out on Amazon Prime or Hulu.

In Saturday Night Fever, John Travolta plays a high school student who spends his weekends disco dancing. He’s such a huge fan of disco music and dancing that he enters a disco contest, and starts to fall for his partner in the process of training for the competition.

The soundtrack to this film is filled with lots of BeeGees tunes—and was so popular it went platinum 16 times over in the United States. If you’re a fan of disco, this is definitely a movie you should add to your watch list.

Jennifer Grey’s “Baby” character goes with her family to vacation in the Catskills. While there, Baby falls for not-so-bad-boy Patrick Swayze, the dance instructor.

There’s lots of drama and lots of close and sexy dancing in this movie, but it’s PG-13, so it doesn’t get too saucy. A great feel-good flick for anyone who likes dirty dancing and fancy dancing, too.

It’s available to HBO subscribers, or for rent on Amazon Prime.

Sarah Jessica Parker and Helen Hunt star as a couple of high school students who want to get onto a dance TV show in Girls Just Want To Have Fun. In order to do that, they have to enter a dance competition.

The problem is, Parker’s strict father doesn’t want her to do it. So, Parker’s character goes behind his back to try to make her dancing dreams come true.

You can watch this fun flick for free with your Amazon Prime or Hulu memberships.

In Hairspray, Ricki Lake stars as an ambitious young lady looking to score a spot on a dance show. Because she doesn’t have the “looks” of the other people on the show, some people think she won’t make it.

This is another fun, feel-good movie that teaches you to keep chasing your dreams. It was remade in 2007, but the original is the real deal authentic item—and has iconic American singer, actor, and drag queen Divine in it.

You can watch Hairspray for free on Tubi or rent it on Amazon Prime.

Save The Last Dance is the story of a teenage girl who loses her rhythm after her mom dies. From ballerina to hip-hop dancer, Julia Stiles’ character finds her groove again at a new school.

A tear-jerker at times, Save The Last Dance has feel-good friendship elements that remind us that the right people pushing us can make a difference when we lose direction.

You can rent this movie on Amazon Prime.

Starring Cher and Christina Aguilera, Burlesque follows a young singer with a dream on her trek from small-town America to Los Angeles where she takes a job as a cocktail waitress. The burlesque club she works at is run by a former dancer, and soon singing and dancing ensue.

With great acting and wonderful singers on the roster, this is not a movie to miss for lovers of dance. While real-life burlesque dancing can get a little risque, this movie is rated PG-13.

You can check it Burlesque on the NBC App by signing in with your cable TV provider, or rent it on Amazon Prime.

Flashdance is the story of Alex Owens, a welder during the day and an exotic dancer by night. While she dances creatively on the stage where other women dance seductively, she dreams of becoming a professional dancer—not dancing in nightclubs.

She chases her dreams, even when she faces huge hurdles. And, of course, there’s a love story in there, too. This one is rated R, so may not be the best to watch while the kids are awake.

You can rent Flashdance on Amazon Prime.

If you want your dance mixed with some psychological horror, Black Swan is the movie for you. Mix ballerinas and a little fierce competition with the great acting skills of both Natalie Portman and Mila Kunis, and you have a stellar film that will keep you guessing until the end.

Because it’s a bit dark, Black Swan is rated R. It has some gory scenes, though they don’t consume the storyline.

Black Swan is available for rent on Amazon Prime.

Shall We Dance stars Richard Gere as a successful lawyer looking for something new in his life. While happily married, he decides to do something for himself—and keep it a secret from his wife.

What he does is join a ballroom dancing class. Of course, because he keeps it from his wife, she gets suspicious that he’s possibly having an affair.

Watch it with your HBO Max subscription or rent it on Amazon Prime.

If you’re a fan of break dancing, or you haven’t seen break dancing done before, the Breakin’ movies are sure to catch your interest. While the original Breakin’ isn’t currently available on streaming, Breakin’ 2: Electric Boogaloo is just as worthy of a watch.

This break dance-filled sequel follows the story of a jazz dancer who moves back home and decides to start break dancing with a couple of friends, but her father disapproves.

You can watch Breakin’ 2 for free on Tubi or check it out with your Showtime subscription.

You Got Served is all about street dancing. A group of dancers gets together at a warehouse to a dance-off with each other.

The excitement begins when a wealthy guy shows up and offers to have his dancers face-off with the warehouse crew for $5,000. Of course, while preparing for the big competition the warehouse dancers start to have some inner drama.

You can rent You Got Served on Amazon Prime.

Stomp The Yard is another flick focused on street dancing. Rather than a group of rag-tag dancers, this film is about a teen, DJ, who is great at dancing but gets in trouble a lot. He starts a college career, starts to fall for a girl, but drama begins to get in the way.

The drama comes from two fraternities who want the dancer’s talents to help them win a dance competition. Unlike the other students, DJ doesn’t have money, but he does love to dance.

Stomp The Yard is available for rent on Amazon Prime.

54 revolves around the story of Steve Rubell and his nightclub Studio 54. It was a popular go-to spot for sex, drugs, and disco dancing in the 1970s. The club was a real place in New York, and the movie touches on the crazy lifestyles of the people who worked and hung out at Studio 54.

The movie stars Mike Myers as Rubell, along with a star-studded cast including Ryan Phillippe, Salma Hayek, and Neve Campbell.  It’s a great look at such an interesting time in music and party history.

It’s available on both Hulu and Amazon Prime, if you have the Cinemax upgrade package. You can also rent it on Prime, too.

In her role as Nomi, Elizabeth Berkley did her best to step out of her teenage Jessie Spano from the 1990s hit “Saved By The Bell.” While many love to hate Showgirls, there’s something interesting about the film. A girl heads out to make something of her life and stops at nothing to be on top, only to decide maybe it isn’t worth it.

This is definitely not a child-friendly film and has nudity. The feathery outfits of the showgirls are dazzling, and the talented acting of Gina Gershon and Kyle MacLachlan makes this film worth checking out.

It’s available on both Hulu and Amazon Prime, if you have the Cinemax upgrade package.

No matter what your movie taste is, there’s a little bit of something for everyone on this list. From the comedy of Hairspray to the fear-inducing Black Swan, there are many genres to choose from. And from the kid-friendly Save The Last Dance and the adults-only Showgirls, there’s something for the whole family and a few to watch on your romantic evening alone. 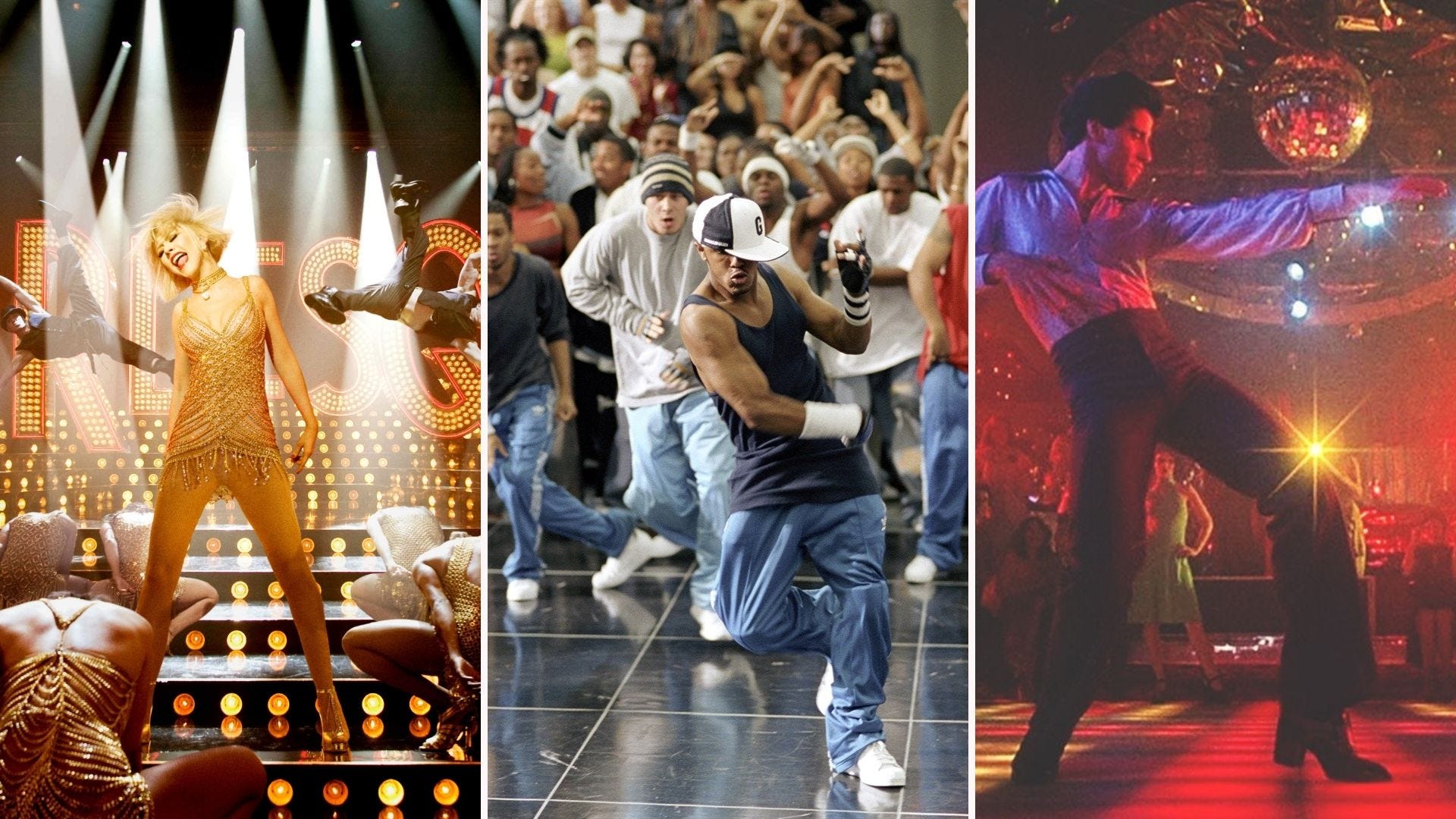