Non-alcoholic (NA) beer doesn’t have to be bland and boring. In fact, some of them taste and smell so similar to the real deal, you might not believe they don’t contain any alcohol.

Beers with less than 0.5% alcohol by volume (ABV) legally qualify as NA brews. While there are beers that proudly market with a true 0% ABV, there’s no need to fret about that 0.5%. A ripe banana or glass of freshly squeezed orange juice has around the same amount of alcohol as a NA beer.

How Non-Alcoholic (NA) Beer Is Made

Non-alcoholic beers have several names, including “low alcohol beer” and “near beer,” or, for the brutally honest folks, “pretend beers.”

The funny thing about these “pretend beers,” though, is that they actually start as real (and alcoholic) brewski. They go through the same brewing process of mashing, boiling, and fermenting.

From there, however, rather than being bottled, NA beers go through an alcohol-removal process.

Some companies heat their beers to remove the alcohol, which often leads to drastic flavor changes. Other brewers use vacuum distilling to lower the alcohol’s boiling point and save those vital flavors.

Today, brewers have balanced their own methods, through trial and error, to create beers that taste almost identical to the real thing. I’ve tried a few myself and am thoroughly impressed with the sophisticated flavor of some of these IPAs, lagers, and ales.

The Benefits of Non-Alcoholic Beer

The low-/non-alcoholic market has been trending recently. You can even purchase non-alcoholic spirits to sip or use in mixers. Any beer-lover might want to give a non-alcoholic brew a shot at some point due to the following benefits:

Now that you have the lowdown on NA beers, let’s check out some of the best-tasting brews on the market.

Athletic Brewing Co. has worked tirelessly using all-natural ingredients to create high-quality NA beers for anyone looking for a healthier lifestyle. With such a limited variety on the market, founder, Bill Shufelt, set out to craft NA beers filled with the same flavor, aroma, and character of alcoholic beers.

After leaving a stable job to fulfill his passion and pairing up with John Walker, a highly accomplished brewer, Athletic Brewing Company was born.

Beyond creating excellent NA beer, Athletic Brewing Company is on a mission to encourage active lifestyles with its Two for the Trails program. It donates 2% of all sales to maintaining hiking trails in various communities.

The company’s support for the athletic community is amazing, but its beer is even better! The Run Wild IPA is spot on, featuring a light session IPA flavor. If you’re looking for something with a little more haze, give the Free Wave Hazy IPA a try.

There’s also a coffee porter, peanut butter brew, gose, and a few others!

BrewDog is passionate about making great craft beer, non-alcoholic included! So, its NA beer selection has been fine-tuned without compromising flavor. The brewery uses a micro-fermentation technique to ensure its beer boasts flavorful results with low calories.

Browse through the “near beer” section. The Hazy AF (meaning “alcohol-free,” of course) pairs tropical fruits and grassy notes. The Wake Up Call Espresso Stout has a full-bodied, robust flavor.

BrewDog is so passionate about inclusiveness for all who drink (or don’t), it’s opened the world’s first alcohol-free bar in London! Since 2007, BrewDog has rocked the nation with delicious beer for everyone.

If you are a big Sam Adams fan, you’ll be happy to know that even this famous Boston-bound brewery has taken the reigns on NA beer brewing. If you’re looking for a hazy beer without the buzz, you’ll love this one.

The alcohol is removed slowly and gently to save the flavor, so it can be savored by you. As soon as you crack open a can, you’ll get a whiff of citrus, followed by tropical fruit flavors in each sip.

I found it to be remarkably similar to the company’s Wicked Hazy IPA (with alcohol). Just the Haze is  a bit lighter, but with more of a juicy punch. Whether or not Sam Adams adds more NA beers to its lineup in the future, this IPA is worth a try.

Rescue Club Brewing Company believes people bring the party, not alcohol. So, the brand has been built on rescuing the non-alcoholic reputation with delicious beer with less than 0.5% ABV.

The company is partnered with Vermont’s Zero Gravity Craft Brewery. The Citra and Motueka hops provide a rich citrus and pine flavor to this craft beer. Reach for a bright, refreshing Rescue Club craft NA beer, and you won’t be disappointed.

Bravus has worked tirelessly for years brewing some of the most full-bodied craft beers sans alcohol. Its coffee/caramel stouts, bitter IPAs, and malty ales haven’t lost any flavor in the process. The only thing missing is the buzz.

Enthusiasts also love the tart raspberry gose, which boasts a malty sweetness that tastes great paired with a cheese. The blonde ale is also a popular choice for anyone looking for a light, fresh take on a standard brew.

Bravus was the first non-alcoholic brewery in the United States, so be sure to check them out.

Non-alcoholic beer has been popping up everywhere, most likely because it tastes better than ever! Don’t believe us? You’ll just have to give one a try. 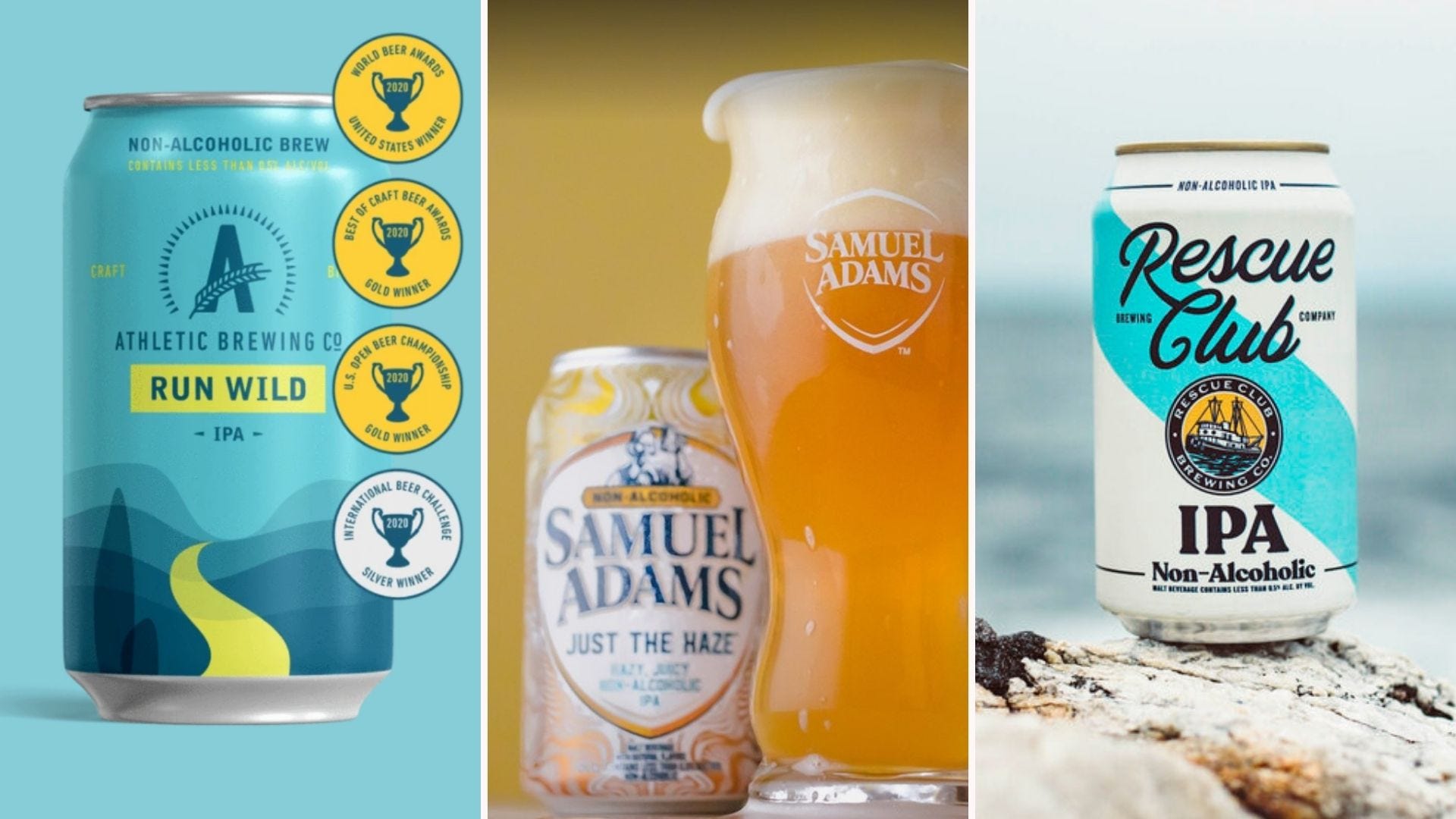