Social media sure has a way of turning heads these days! From cloud bread to baked feta and gorgeous focaccia, the nation is learning new culinary skills by the minute. That’s where these viral air fryer bagels come in!

Bagels are filling and inexpensive, and make the perfect grab-and-go breakfast when you don’t have time to fuss around, not to mention that they make fantastic bases for little pizzas and taste just right filled with whatever sandwich fillers your heart desires.

In the early 20th century, European immigrants introduced a dough-cooling and boiling method to New York. Today, the resulting bagels are well known for their deliciously crisp, yet chewy texture owing to that very method, which is still used in shops and delis. However, many also claim that the water in New York is “soft,” which makes an enormous difference in bagel quality and flavor.

So, when a two- or three-ingredient version is introduced to the world, flavor and texture skepticism plays a major role for any bagel enthusiast. As an air fryer owner and bagel-lover myself, I thought, What the heck? I’ll give these a try.

After the first batch, I was sold! To think that a bagel, comprised of flour, Greek yogurt, salt, and baking powder, could result in such similar quality to a normal bagel is a bit mind-blowing, to say the least.

Is it a perfect substitute for traditionally boiled and baked yeast bagels? No, it isn’t. You’ll have to take a trip to New York City where bagels take a few days to cool, the yeast has to ferment, and a boiling and baking session must take place for you to get that experience.

However, if you’re hoping for an inexpensive batch of soft and fluffy bagels that take less than 30 minutes to prepare, air-fry, slice, and toast before the ultimate cream cheese schmear, then voila!

The biggest difference between these and traditional bagels is that they have a bit of a strong Greek yogurt taste. However, the tangy flavor pairs just right with cream cheese. We love how soft, light, and chewy they are, too.

After over a dozen batches, some trial and error, and numerous adaptations to this recipe, I’ve learned a thing or two. Here’s what makes them just right every time.

Tips for the Best Air-Fryer Bagels

Like everything when it comes to cooking and recipes, there are no rules—after all, that’s where the creativity comes in. However, it can be helpful to keep the following tips in mind when making air fryer bagels:

Now that you’re armed with some tips, let’s move on to my experiments! Every variation that I tried was adapted from the 15-minute air fryer bagels by Gimme Delicious. I used the same four ingredients for all of them: flour, Greek yogurt, baking powder, and salt.

Get the Recipe: Gimme Delicious

Plain bagels are, well, plain. However, there’s something to be said for these little standard breakfast treats! If you’re a fan of these, then be sure not to skip the egg wash and work carefully to brush out the lumps on your bagel.

Before placing it in the air fryer, take a tiny pinch of salt and sprinkle it over your bagel. That step is optional, but it enhances the bagels a tad further.

These have a bit more of a tangy-forward Greek yogurt taste because there are no seasonings or toppings to help mask that flavor. So, while they’re still delicious, they differ a bit more (compared to a traditional plain) than any other variation below.

We all know the perfection that comes with everything bagel seasonings. Feel free to make your own using poppy seeds, minced garlic, minced onion, sesame seeds, and flakey sea salt. All ingredients, including the minced garlic and onion, can be found in the spice aisle of your grocery store.

I like making my own because I like light sesame seeds, extra minced garlic, poppy seeds, and a moderate amount of minced onion. Plus, adding salt is paramount, and I like to add it last so that I know it’s evenly distributed and doesn’t overpower my bagel.

Use Anything from the Everything

The best part about making your own everything bagel seasoning is that you can take any component and use that as a topping.

Before placing the bagels in the air fryer, be sure to add a pinch of flakey sea salt to sprinkle over the top.

Give your bagel an egg wash and place at least five or six sliced, pickled jalapeños over the top. From there, sprinkle on your favorite yellow shredded sharp cheddar, followed by a pinch of flakey sea salt sprinkled over the top.

Finally, place it in the air fryer. These bagels taste amazing with veggie cream cheese, but they also make a fine breakfast sandwich.

Make these just like you did the jalapeño bagel above, but without the jalapeños! Instead, sprinkle over your favorite cheddar with a pinch of flakey sea salt. Have fun experimenting with other shredded cheeses as well!

These came out delicious! Simply add two teaspoons of cinnamon and six tablespoons (or two one-ounce boxes) of raisins to your dry ingredients. Next, work in the Greek yogurt, and then cut, shape, egg-wash, and air fry as usual!

Take your cinnamon raisin bagels up a notch with a cinnamon sugar topping! You can make a quick cinnamon sugar combo by using one part cinnamon and three parts granulated sugar.

Right after the egg wash, dredge the top of the egg-washed bagel into a plate of cinnamon sugar a few times until the top is completely coated. Air-fry it up and enjoy this one toasted with butter.

Add half a cup of semisweet chocolate morsels to the dry ingredients before adding the Greek yogurt into the mix. Then, shape your bagels and air-fry as called for in the recipe. If you haven’t tried the cream cheese and chocolate combination, you’re in for a real treat.

Wondering which bagels I liked best? Well, the verdict is in. Everything-seasoned, jalapeño cheddar, and cinnamon raisin bagels with the sugar topping were the absolute best! Try them all yourself to discover your own new favorite. Or, you can always just stick with the ever-delicious New York-style bagels. 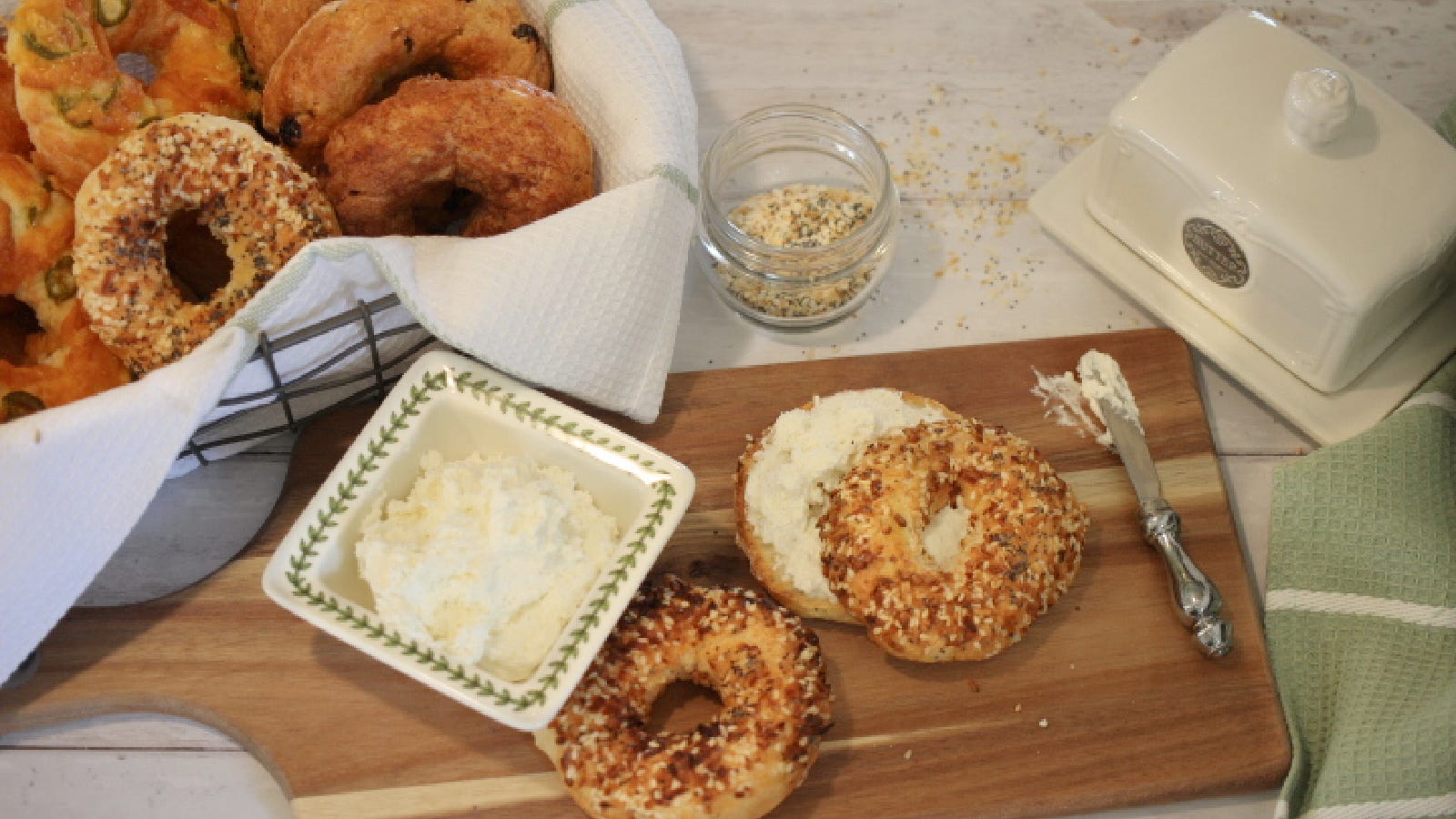