Camping season is finally upon us, and keeping those over-the-fire meals easy and tasty is a worthwhile goal. We recommend these 10 simple recipes because not only can you prep them ahead of time, but they also won’t leave you with tons of dirty dishes.

Theoretically, you can cook pretty much anything while camping. However, not everyone wants to deal with a camping stove and piles of dirty dishes to clean.

These 10 recipes will help you keep it simple and fun, but still delicious. You can also pre-prep each of these at home before you leave for a minimal mess. Most only require some tinfoil to be cooked on the fire, although a few call for a pot of boiling water and/or utensils to eat them with.

No matter which of these yummy dishes you choose, you’re sure to create some smiling faces around the campfire.

Anyone who went to summer camp as a kid is probably familiar with this meal. Also called “tinfoil dinners,” this recipe consists of cut-up meat, vegetables, and potatoes wrapped in foil and cooked in the coals of a campfire. Ground beef is popular because it cooks quickly, but this recipe uses sausage for extra flavor.

You can prep everything at home and keep the foil wraps cool until it’s time to throw them in the fire. Make sure to cut all vegetables nice and thin to ensure that they’re fully cooked at the same time that the meat is done.

These should be ready after 20 to 40 minutes in the coals, which means that they need to start cooking early to avoid hangry family members. You will need a fork to enjoy it, but you can eat out of the foil packets to avoid dirtying plates.

Get the Recipe: Chelsea’s Messy Apron

This is another version of a hobo foil packet to try, this time combining shrimp, sausage, corn, and zucchini for a yummy shrimp boil. Traditional shrimp boils include potatoes, but this recipe omits those to make sure that all the ingredients cook at the same rate.

This recipe includes plenty of pictures and tips to help you assemble and cook a delicious meal. And again, you can prep everything at home before you take off for your camping trip. Just be sure to keep the packets in a cooler on ice until you’re ready to cook them.

Get the Recipe: Fresh Off the Grid

Omelet in a Bag

This recipe is easy to prep and allows for lots of customization, making it perfect for families with different taste preferences. Depending on the length of your camping trip, you can prep the omelets at home or bring all of the ingredients to your campsite and assemble them just before cooking.

All you need to do to create this easy breakfast is crack two or three eggs into a heavy-duty resealable bag, add your fillings of choice, and then seal the bag and shake it until all the ingredients are combined.

Then, simply drop the bags into a pot of boiling water and cook for 10-15 minutes, or until done. These can be slid directly onto a plate or wrapped in a heat-resistant food wrap and eaten directly out of the bag for no mess.

Get the Recipe: Favorite Family Recipes

This classic camping dessert is popular for its flavor and convenience. To make it, take a banana and slice it down the middle lengthwise, but not all the way through. Then, pull the banana apart slightly so that you have an opening in the middle, similar to how you would prepare a baked potato to be filled after being cooked.

You can fill your banana with whatever you want. Some popular flavor combinations include chocolate and marshmallows, Nutella and strawberries, and coconut shred and caramel sauce.

Once your banana is full of yummy ingredients, wrap the entire thing in aluminum foil and warm it in the fire until the banana is soft.

Get the Recipe: Fresh Off the Grid

Nothing beats a warm meal by the fire at the end of a long day of camping. These croissant sandwiches can be put together at home and then warmed in the fire for a delicious and comforting meal.

Feel free to substitute the ham and swiss cheese for your preferences. These sandwiches also freeze beautifully, so you can prep them for up to three months in advance of your camping trip. Just pop them in a cooler before you leave and warm them over the coals before eating.

Get the Recipe: Life with the Crust Cut Off

Similar to the sandwich recipe above, these burritos can be prepped at home, wrapped in foil, and heated over the fire for an easy and filling breakfast. This recipe shares how to cook everything over the campfire, but you can avoid making a mess by assembling the burritos beforehand.

You can fill these with whatever ingredients you would like, although creating an egg + potatoes + protein combo will be the most filling. You can bring hot sauce or other toppings to add after the burritos have been warmed in the fire, but these are optional.

Get the Recipe: The Adventure Bite

French toast while camping? Aluminum foil is the star here again and allows you to bake your bread with an egg and milk mixture in the fire until cooked through.

This recipe is the messiest on this list because you will probably need plates and forks to eat. However, if you want to get really creative, you can cut your French toast into strips when it’s finished cooking and use skewers to eat it on a stick.

You can even make French toast kabobs by layering pieces of toast, strawberries, and blueberries on skewers before dusting everything with powdered sugar.

Get the Recipe: Delish

Ice Cream in a Bag

Make ice cream without an ice cream maker with this cool (and portable) science hack. All you need is half-and-half, vanilla, sugar, ice, and salt. This recipe contains step-by-step instructions with all the details, but basically, all you need to do is seal the half-and-half, vanilla, and sugar in a ziplock bag and put that into a larger bag filled with ice and some salt.

The salt makes the ice melt very quickly so that it cools the cream mixture and turns it into ice cream in just a few minutes.

When the ice cream is ready, it can be eaten straight out of the bag for minimal mess. You can also bring along your favorite toppings to add. This recipe is best made on your first camping day if you’re storing your ice in a cooler.

Get the Recipe: The Best Ideas for Kids

These cakes are another treat that can easily be prepped at home. This recipe uses a shortcake dessert shell so that you don’t have to deal with a runny batter. Just layer all of the ingredients on a piece of foil and wrap everything up until it’s time for dessert at your campsite.

This recipe gives instructions on grilling the foil-wrapped cakes, but you’ll get the same result by warming them in the coals of your campfire for a few minutes. All you’re trying to do is melt the butter and sugar for the gooey effect that these cakes are known for.

Serve these warm cakes with the ice cream recipe from above!

This super simple recipe is perfect for relaxed mornings when you want something quick to wake everyone up. All you need is three ingredients: crescent roll dough, cinnamon, and sugar. Just wrap the dough around wooden skewers, sprinkle it with cinnamon and sugar, and roast it over the fire until it’s cooked.

These can be eaten plain or drizzled with icing for extra sweetness. You can also use packaged cinnamon roll dough for a single-ingredient recipe, but you’ll have to roll it extra thin before wrapping it on your skewers.

Cinnamon roll dough is often heavy and might not cook properly if it isn’t rolled thin. Packaged dough often comes with a premade glaze, too, which will make your job even easier.

Get the Recipe: Almost Supermom
READ NEXT
Anne Taylor Anne Taylor is a writer with a BA in Journalism and a passion for storytelling. Her work has been published on a variety of websites including Mental Floss and Well + Good, and she recently published her first novel, What it Takes to Lose. When she's not writing, Anne loves to travel (19 countries and counting), spend time outside, and play with her dog, Pepper. Read Full Bio »
Recently Popular
LifeSavvy is focused on a single goal: helping you make the most informed purchases possible. Want to know more? 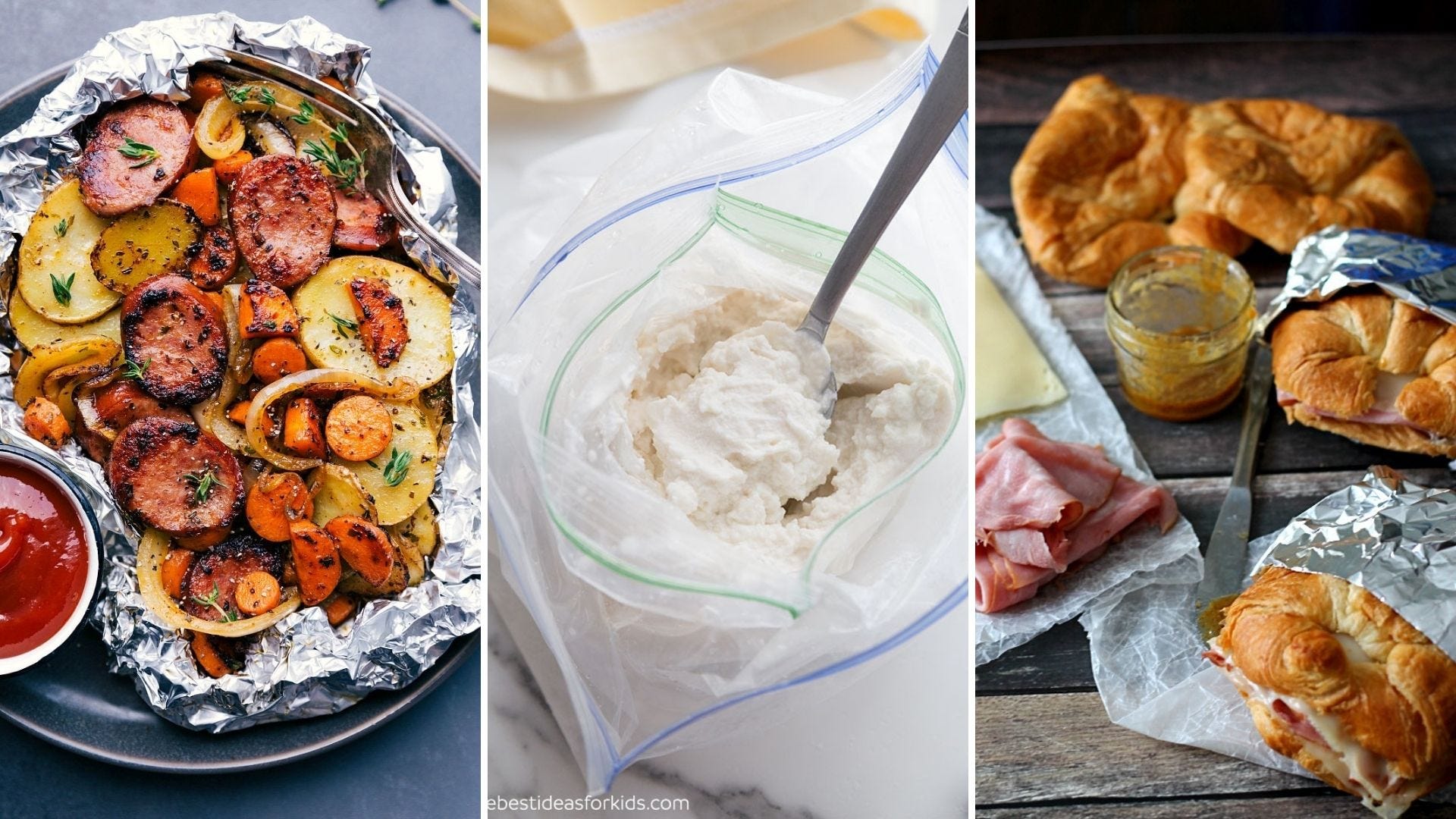