National Doughnut Day is celebrated every year on the first Friday in June. Participate in the festivities this year (or anytime) with one of these delicious recipes!

Never heard of National Doughnut Day? Here’s the heartwarming backstory to the pastry-themed holiday. During World War I, the Salvation Army sent groups of women to provide support to troops on the front lines. The primary mission was to offer moral support and supplies like blankets and coffee, but “home comforts” like fresh-baked goods were also something that the soldiers craved. Whipping up a continual supply of fresh-baked goods right there on the front line proved challenging, but two clever young women, Margaret Sheldon and Helen Purviance, came up with a front-line-friendly solution.

They started using the metal, kettle-like helmets issued to the soldiers to fry up doughnuts, hot and fresh, right there in the relief huts on the front line. Nicknamed “doughnut lassies,” the young women working the relief huts did more to popularize the doughnut among Americans than any advertising campaign ever could. When the soldiers returned home, many of them kept their taste for doughnuts, and doughnut shops became ubiquitous across the country in the ensuing years.

In 1938, The Salvation Army decided to honor these volunteers with a holiday to help raise awareness and money for their efforts.

Doughnut? Donut? Both are acceptable spellings of the popular treat in American English.

Doughnuts have come a long way since they were popularized on the front lines, and today’s treats come in a variety of flavors and sizes. Here are some that you can make right at home!

There’s nothing more classic than a glazed doughnut. This basic recipe is a great place to start for anyone wanting to make this breakfast treat at home.

Detailed instructions and step-by-step photos make this recipe doable even for novices in the kitchen. A doughnut cutter will speed up the process and give you perfectly sized doughnuts every time, but you can use a drinking glass and a shot glass in a pinch to, respectively, shape the doughnut and punch the doughnut hole.

Some people like their doughnuts covered in frosting and others prefer them filled with jelly or custard. These treats puff up before being fried and are filled with a delicious sweet cream.

Filled doughnuts are a lot easier to make than they sound. This recipe contains detailed instructions to help you get through every step successfully. These treats are rich enough to fill you up after just one, but they are so good that you might need to have two. (We won’t tell!)

Get the Recipe: Brown Eyed Baker

Doughnut holes were born out of a desire to use up the scraps made from the traditional doughnut shape, and they’ve turned into a treat just as good as their predecessor. This doughnut hole recipe utilizes a mini muffin pan for easy cooking that requires no hot oil.

While these treats aren’t healthy per se, they do contain better-for-you ingredients, like whole wheat flour and Greek yogurt, which is just another reason to justify eating a handful every day.

Whether you’re a fan of The Simpsons or you just like your food to be pretty, these doughnuts are topped with a bright pink glaze for a treat that looks and tastes delicious. Sprinkles are optional but definitely recommended.

This recipe uses a doughnut pan that allows you to bake your treats to a slightly healthier version. They still taste just as delicious, though.

Get the Recipe: As Easy As Apple Pie

Since doughnuts are made with milk and butter, it can be tough to find a good vegan option. This recipe uses plant-based alternatives for a vegan doughnut that’s just as indulgent as you’d hope.

The cinnamon-sugar mixture used to coat these treats is a perfect flavor that isn’t too sweet. These make a great addition to your morning cup of coffee or tea.

Get the Recipe: Nora Cooks

Fritters are a popular spin on the doughnut that create a denser, sweeter concoction that’s often filled with fruit. While apple fritters are staples at many bakeries, this berry fritter recipe shouldn’t be overlooked.

The berries in this version create a lighter flavor that’s perfect for summer. You can’t go wrong by adding fresh blueberries and a strawberry glaze to a buttery doughnut, right?

Maple bars are another staple at most doughnut shops, especially those on the West Coast. The ultra-sweet maple frosting is comforting and delicious on top of the puffy fried pastry.

This recipe uses mashed potatoes in the dough, which keeps the doughnuts extra light, so don’t be weirded out by this step. You can eat these plain or topped with crumbled bacon for a sweet and savory treat.

Get the Recipe: Beyond the Chicken Coop

Are you an air fryer aficionado? Find another reason to love your favorite appliance with this strawberry-glazed doughnut recipe.

For an even easier take on this breakfast treat, this recipe uses canned biscuit dough instead of a homemade version. Simply brush the dough with a little oil and cook it in the air fryer for a fried taste without the extra calories. The strawberry glaze on top adds the perfect sweet element to complete this pastry.

Get the Recipe: The Novice Chef

If you haven’t tried old-fashioned doughnuts, you’re missing out. These are usually made with sour cream for a slightly tangier flavor and super-moist treat.

The unique dough cracks slightly while being fried, which creates small crevices that become a little crunchy and perfect for soaking up the sweet, thick glaze. They also don’t take as long to make because they don’t need to rise due to the absence of yeast. Really, it’s a win-win.

Get the Recipe: Handle the Heat 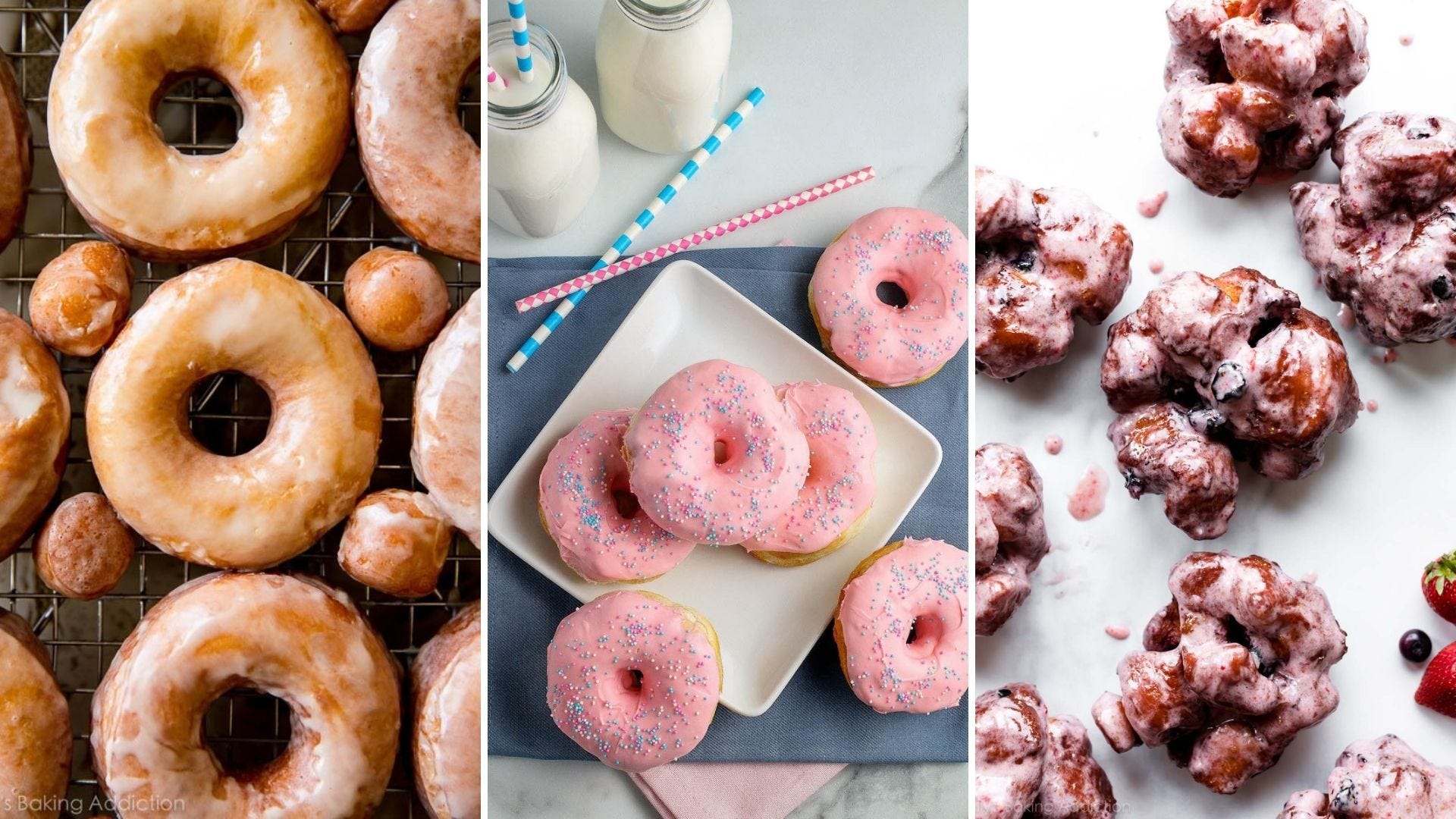