When lobster goes on sale, or if you live near a coast, spoiling yourself with this culinary indulgence is a must this summer!

We’ll show you how to boil or steam lobster and then remove that sweet, delicate meat from its shells for a delicious meal. We’ve also shared some of our favorite lobster feasting gear and recipes for you to try, so let’s get cracking!

Lobsters, crabs, and other shellfish are purchased live and cooked at home for one significant reason: food safety. Lobsters have a harmful bacteria on their flesh called “vibrio,” which rapidly multiplies when the lobster dies and begins to decay.

Unfortunately, even hot boiling water or steaming conditions won’t always destroy this type of bacteria, so cooking it live is necessary to ensure that you don’t become severely ill with food poisoning.

However, for many folks, killing something for dinner is, understandably, too difficult to bear. If cooking a live lobster would be too disturbing for you, you can usually find pre-cooked lobster meat in the frozen section at your supermarket.

Tips for a Well-Cooked Lobster

We live on a coast, so we make lobster several times a year, especially when supply is high and prices are low. Below are a few tips that we’ve learned over the years:

How to Boil Lobster

Boiling lobster is one of the two primary ways of cooking it. It’s a quick and efficient method to ensure that your lobster is cooked all the way through. Just don’t overcook, as the meat will quickly turn into a hard, rubbery texture.

Place a large stockpot of salted water over high heat. Make sure to leave room for the weight of the lobsters, which will cause your water level to rise. You’ll want about three quarts of water per every one to two pounds of lobster.

Once the water comes to a boil, add your lobsters head down, and then cover them. You will know that the lobsters are cooked through when they turn a bright orange-red hue, but this isn’t the only indicator. The meat should change from translucent to bright white.

Using cooking times and a thermometer is the safest way to ensure that the meat is cooked just right and reaches a safe internal temperature of 145 degrees Fahrenheit.

Once it’s been cooked for the correct amount of time, use an instant-read thermometer to check that the tail is cooked to 145 degrees Fahrenheit. Using tongs, remove the lobsters and allow them to rest on a separate platter for about three to five minutes before serving.

How to Steam Lobster

Steaming lobster is similar to boiling it. However, instead of filling the pot, you first heat about three or four inches of water. Once it’s boiling, add your lobsters to the pot, and then cover them with the lid. Cooking times are a bit longer when steaming, but this method tends to yield more tender results.

Use an instant-read thermometer to check that the tail is cooked to 145 degrees Fahrenheit. Again, once they’re cooked through, remove the lobsters carefully with tongs and allow them to rest on a separate platter for about three to five minutes before serving.

How to Remove Lobster Meat

To remove the tail meat, grab ahold of it, and then twist and pull it away from the body. Feel free to use a knife, lobster shellers, or shears to slice through the tail and remove the meat in one large piece.

The claws can be tricky. Start by breaking off the small portion of the claw, and then use crackers to crack the knuckles and claws to remove the meat.

To remove the meat from the legs, break each leg at the bend, and then use a skewer to remove the small morsels of meat.

Now that you have the knowledge, it’s time to get the right equipment! Here are a few of our favorite lobster feasting essentials.

A stockpot with steamer insert: Any large stockpot will do the trick, but this one from Kenmore is a fantastic option if you don’t already have one in your cookware collection. It’s reasonably priced, and features a removable steamer insert, so you can boil or steam. It’s also great for stocks, sauces, soups, and stews.

A set of seafood tools: You can break down lobster shells with your hands, but we highly recommend using crackers, skewers, and shellers. It’s a lot of work to get to that precious meat, so having the right tools really makes a huge difference. We love this set from HIWARE because it also includes scissors to help you cut through those tails.

Ceramic butter warmers: These come in handy when you plan on serving any seafood in need of a butter dip. Crab legs, shrimp, lobster—you name it—these babies will keep everyone’s butter hot and melted.

Now that you have everything you need to enjoy a good meal, let’s take a look at five traditional recipes that you can try!

There are two ways to eat lobster rolls: cold with a fresh mayonnaise-based dressing, and hot in melted garlic butter, and always served on a grilled split-top hot dog roll.

A Maine lobster roll is the cold version, similar to a seafood salad, but made with chunks of real lobster rather than imitation crab or tiny shrimp. It’s both simple and downright delicious!

Get the Recipe: Striped Spatula

Connecticut-style lobster rolls are the warm and buttery versions that we talked about. This recipe includes a bit of chive as a garnish and gives off a delicate, oniony flavor and lemon zest, but you can omit both to keep things extra traditional if you’d like. We love these as much as we do Maine-style lobster rolls!

Get the Recipe: Savory Experiments

A few humble ingredients, like cherry tomatoes, butter, shallots, and pepper flakes, come together nicely in this simple and delicious spicy lobster spaghetti. The sharp pepper flakes and tangly lemon complement the tender-sweet lobster like no other.

Spoil yourself and/or a loved one with this delicious meal, but don’t forget to make some warm, crusty bread to sop up that leftover butter sauce.

If you only like the tail of the lobster, then buy some frozen and prepare this easy, yet gratifying dinner! You’ll learn how to butterfly the tails before broiling them with seasoned garlic butter.

Serve these with rice pilaf or mashed potatoes and your grilled veggie of choice.

Lobster bisque is another classic and must-try dish. The rich consistency paired with the intensely flavored cream-style broth makes this indulgent soup one for the books.

Be sure to make this bisque on a cool, autumn evening or any time that you have some special guests you want to impress.

Get the Recipe: Immaculate Bites

Cooking lobster whole is intimidating for many folks. However, like most things, once you’ve done it a few times, it’s not half bad. Be sure to add this feat to your culinary bucket list, and then you can move on to even more decadent seafood recipes! 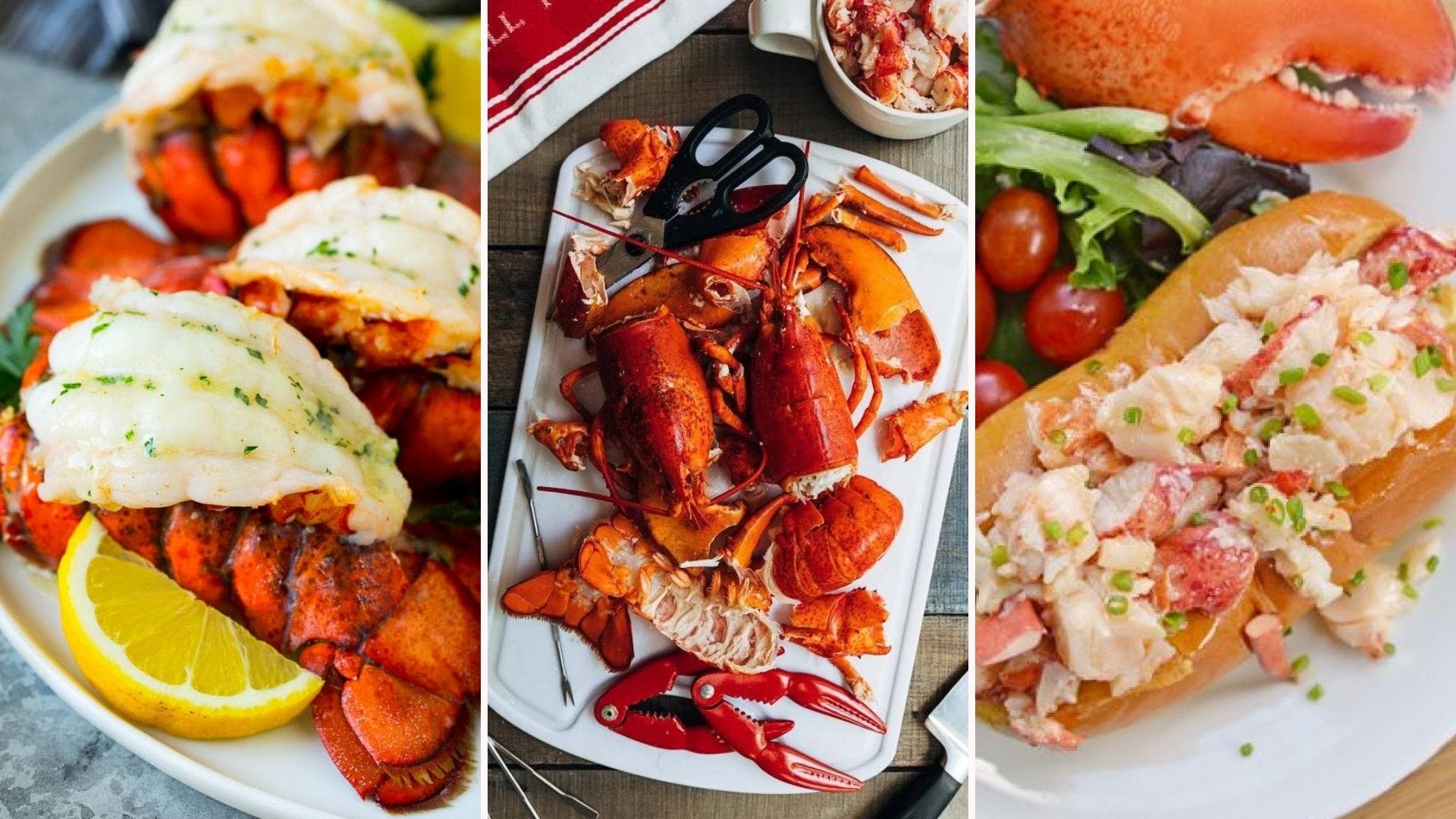