Summer is all about spending time together and taking advantage of the sunny days. Iconic vintage lawn games are the perfect way to bring everyone together and have some easygoing fun, right in your own backyard!

There’s something incredible and timeless about simple, classic lawn games. Most of them have been around for decades, if not centuries. Plus, most are just challenging enough for a bit of fun and lighthearted competition. Grab a few today!

Croquet is one of the most iconic lawn games, and it’s a perfect choice for a low-tech, easy-to-participate group game. There are several different variations of the rules, including American six-wicket, golf croquet, and garden croquet.

However, all of them involve competing to hit balls through hoops with a mallet. You can play individually or in teams, with as many or as few difficulties as you’d like.

For an easy and portable set to get started with, we recommend the Juegoal Six Color Set. It has everything you need for a basic game, including 28-inch mallets and six different balls for six players. When the game is over, you can tuck everything away neatly in the extra-large drawstring bag.

Boccie (or bocce) is an Italian game that has become a staple for tons of folks looking for some outdoor summer fun. It’s a variation of lawn bowling that involves attempting to get more of your side’s allotted balls closer to a target than your opponents’ balls.

The GoSports Backyard Bocce Sets come in a few different varieties, so you can customize them to suit your preference. Choose from classic resin balls, rubber, or a set with LED lights so you can keep playing after the sun goes down!

It all comes with a sturdy canvas tote so you can easily carry all your equipment to and from the game.

No matter your skill level, you’ll likely enjoy a game of badminton. You’ve probably played this tennis-like game before. Instead of a ball, you bat a “birdie” back and forth across a net with slim rackets.

Badminton has a long history as an elite (even Olympic) sport, but it’s every bit as much fun to just play casually with family or friends.

Franklin Sports Badminton Sets come in three different varieties to match your mood and skill level. All of the sets include a net, poles, stakes, ropes, four rackets, and two birdies. However, the “starter” kit comes with smaller PVC stakes and two-piece rackets, while the “professional” version has longer, stainless steel stakes and one-piece rackets.

Kubb dates all the way back to the Vikings, but it doesn’t have much of a learning curve. If you’ve never played, it’s like horseshoes, except the object is to knock over your opponent’s stakes and get to the middle before he or she does. There are a few different sets of rules for gameplay.

To get started, though, you first need some supplies. The Yard Games Kubb Premium Set includes 10 kubb blocks, one “king” block, six dowels for tossing, stakes to mark out your playing field, and a case complete with a rules guide.

Also called beanbag and sack toss, along with other variants, cornhole is one of the simplest lawn games to play. All you need is a sloped, elevated board with a hole in the middle, and some beanbags or something similar to try to toss into the hole.

The real trick comes later in the game, when you have to navigate all the bags on the board that missed the hole.

You could probably make a basic cornhole set yourself, but if you’d rather grab a ready-made kit, we like the GoSports Classic Set. It comes complete with a sloped board (which is available in lots of creative colors, themes, and designs), eight beanbags, and a carrying case.

Horseshoes is one of those simple games that’s been around for ages. The goal is pretty basic: You want to get your U-shaped horsehoes to land around a ground stake.

You might be tempted to pick up a cheaper set with cast-iron horseshoes. Those will work temporarily, but just be aware that cast iron, while strong, is also pretty brittle. They tend to break relatively quickly due to the wear and tear of impact.

Instead, consider a forged-steel set, like this one by St. Pierre Sports. This set of four is up to the challenge of repeated games and won’t crack or shatter. It also comes with reliable stakes, a carrying bag, and set of rules.

It’s also rated for tournament play by the National Horseshoe Pitching Association. While you might not “need” a pro set for casual backyard games, it might be cheaper and more convenient in the long run than replacing cheaper sets all the time.

Ladderball is called lots of different names, many of which are pretty colorful (hello, cowboy golf!). The game, however, is pretty basic. You toss a bola (two balls connected by a string) and try to get it to land and wind around the rungs of a ladder.

Different rungs are worth different amounts of points, and some people play with extra “house rules,” such as bonuses for getting the whole string to wrap around a rung.

To get started playing this simple, but challenging, lawn game, try the GoSports Pro Grade Ladder Toss Set. It includes two target ladders with three rungs each, six rubber bolos for easy and safe tossing, a carrying case, and a set of rules.

Like most things, when it comes to lawn games, you can’t go wrong with the classics. They’re easy to set up and play, and most are also adaptable for any number of players or “house rules.” And remember to add some outdoor lighting so you can play even longer. 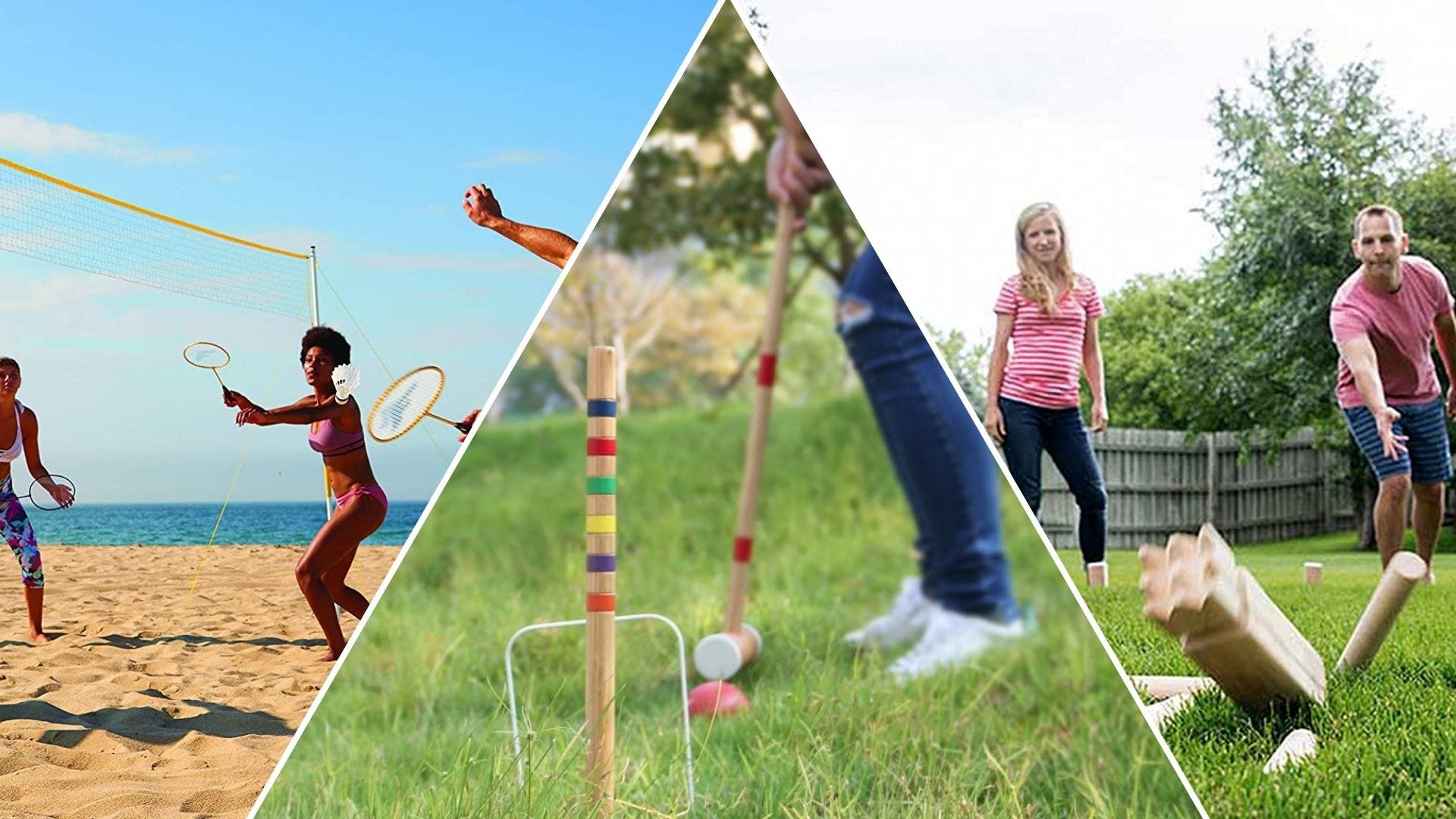