A prime restaurant steak is tough to beat, but it can be a pricey venture. Learn to cook a steak at home with all the flavor at half the price, no grill necessary.

When was the last time you experienced a quality steak house? You know what we mean, the kind with linen tablecloths, soft candlelight, a la carte sides that are horribly overpriced, and a waiter that is somehow both professional and slightly condescending all at once. Haughty service staff aside, steak houses tend to be a treat and an expensive one at that.

There’s no reason you can’t have the same incredible steak at home and at less than half of what that fancy steak house charges. Plus, you won’t get an eye-roll from the waiter when you ask if you can take the bread home in a box. Win-win, in our opinion. Interested in how to make that happen? Let’s start at the beginning.

Cooking a steak starts with picking the right cut of beef.  Since we’re likely only adding salt, pepper, and maybe a few other herbs or spices, the cut used determines a lot. There are three main areas to look at it when we’re talking about steak: the tenderloin, the sirloin, and the rib steaks.

The tenderloin sits on the back of the cow; it’s very lean and very tender. It’s also quite costly. You might recognize it best as Filet Mignon or a Chateaubriand. While it’s many a customer’s favorite, within the world of chefs, it’s seen as flavorless, boring, and overpriced. Rule number one when cooking: fat equals flavor. So, it makes sense that this lean cut, while entirely appropriate for cooking as steak, isn’t a chef’s choice.

That said, you can easily add a bit of fat to a filet in the form of bacon (or bacon grease) or just a nice smear of butter before finishing it off.

The sirloin, however, is renowned amongst the culinary world. It’s what you’ll see featured in most steak houses. It’s got a little more fat, and therefore a little more flavor than the tenderloin. You’ll find cuts from this area listed as NY Strip, Kansas City Steak, and Top Loin.

Finally, we have the rib steaks. These tend to pack a lot of flavor. They also tend to lack in tenderness. Steaks in this category include t-bones, rib eyes, and porterhouse steaks. Other areas, such as the round, chuck roast, and front or hind shanks are more stringent, chewy, and often better left to different cooking methods than what we discuss here.

How To Prep Steak

What you do to prep your steak before cooking is a matter of opinion. We’ll address some tried and true practices here, but know that there are always other options. First off, many a restaurant chef and home cook knows that steak shouldn’t be stored in plastic. It needs to breathe! If you buy it shrink wrapped on a foam tray, remove the plastic as soon as possible and wrap the steak either in butcher paper, or set it on a plate in the fridge and loosely cover with paper towels.

Secondly, it’s important to season your steak at the right time. There are two schools of thought on this. Some believe it’s best to season directly before placing the steak on the grill; others season their steak up to 24 hours in advance. We’ve found that either method works. Seasoning well in advance gives the best outer crust to the steak probably because the salt works it’s way into the muscle fibers via diffusion, pulling liquid with it, and creating a dry surface.  However, seasoning directly before cooking still delivers excellent results.

What you season your steak with is entirely up to you, but with a prime cut, we recommend sticking to salt and pepper. The steak itself will have a ton of flavor, and a liberal sprinkling of salt and pepper is all you really need.

How To Cook The Steak

You’ve got your cut picked out. You’ve seasoned it and stored appropriately. Now, let’s cook some steak!

This part is pretty straightforward. Preheat your oven to 450 F. Place a cast-iron skillet into the oven while it preheats. Once it’s hot, remove the skillet, put it on the stove, turn the burner up to high heat and add a little clarified butter or oil (about one tablespoon).

Once the butter or oil swirls smoothly across the skillet, add the steaks, being careful not to crowd the pan. Cook for four to five minutes without moving, until a crust develops. Flip the steaks and give them another two to three minutes on the stove, and then put the whole skillet, steaks included, back into the preheated oven.

How long the steaks cook in the oven is dependent on how thick they are. We suggest using an instant-read thermometer, stuck into the side of the thickest part of the steak, to determine it’s doneness. We also recommend that you remove the steaks from the skillet at five to ten degrees lower than the desired level of doneness. The steaks will continue to rise in temperature while they rest.

On that note, be sure to let them rest at least ten minutes before serving. And, if you’re feeling a little extra, you can top each steak with a dab of butter during the resting time. Restaurants have been using this trick for a while, and we doubt you’ll be disappointed with it.

That’s how to cook a steak, but you may still have some questions. Let’s dive in a little deeper to see if we can answer them.

The use of cast iron is essential because of it’s impressive ability to retain a high temperature at a reasonably low cost. A good cast skillet won’t set you back much, but it will give you a beautiful sear every time.  In the method outlined above, a cast-iron skillet is vital to creating that deep mahogany crust. Our skillet moves seamlessly from oven to stovetop and back again, which at these temperatures, would cause damage to a regular pan.

Many fear the maintenance behind a cast iron skillet but fear not. Cast iron is virtually indestructible. While you may need to re-season them after significant kitchen disasters, you’d be hard-pressed to do them any real damage. And, they’re not just good for steaks. Any high heat thriving dish, like fajitas or pan-fried chicken, does well in cast iron.

Why Finish in the Oven?

We know, a baked steak doesn’t sound very appealing. However, cooking steak in the oven has been done for decades in the restaurant world. Even steakhouses that claim their steaks are flame-broiled, probably only flame-broiled them for a few minutes before they switched to an oven.

An oven provides gentler, more even and consistent cooking than an open flame does. While the grill, or a hot cast-iron skillet on the stove, does excellent at getting a good sear, it will quickly burn the outside of your filet while leaving the inside undercooked. Most of us prefer a deep brown and crusty exterior (not blackened)  with a perfectly cooked center. To achieve that, the stove to oven—or grill to oven—method works best.

Steak doesn’t have to be an overly pricey venture. It also doesn’t have to be reserved for summer months. It’s easy to make, easy to impress with, and doesn’t require a grill. So grab your cast iron skillet, pick out the perfect cut, and make tonight steak night. You earned it. 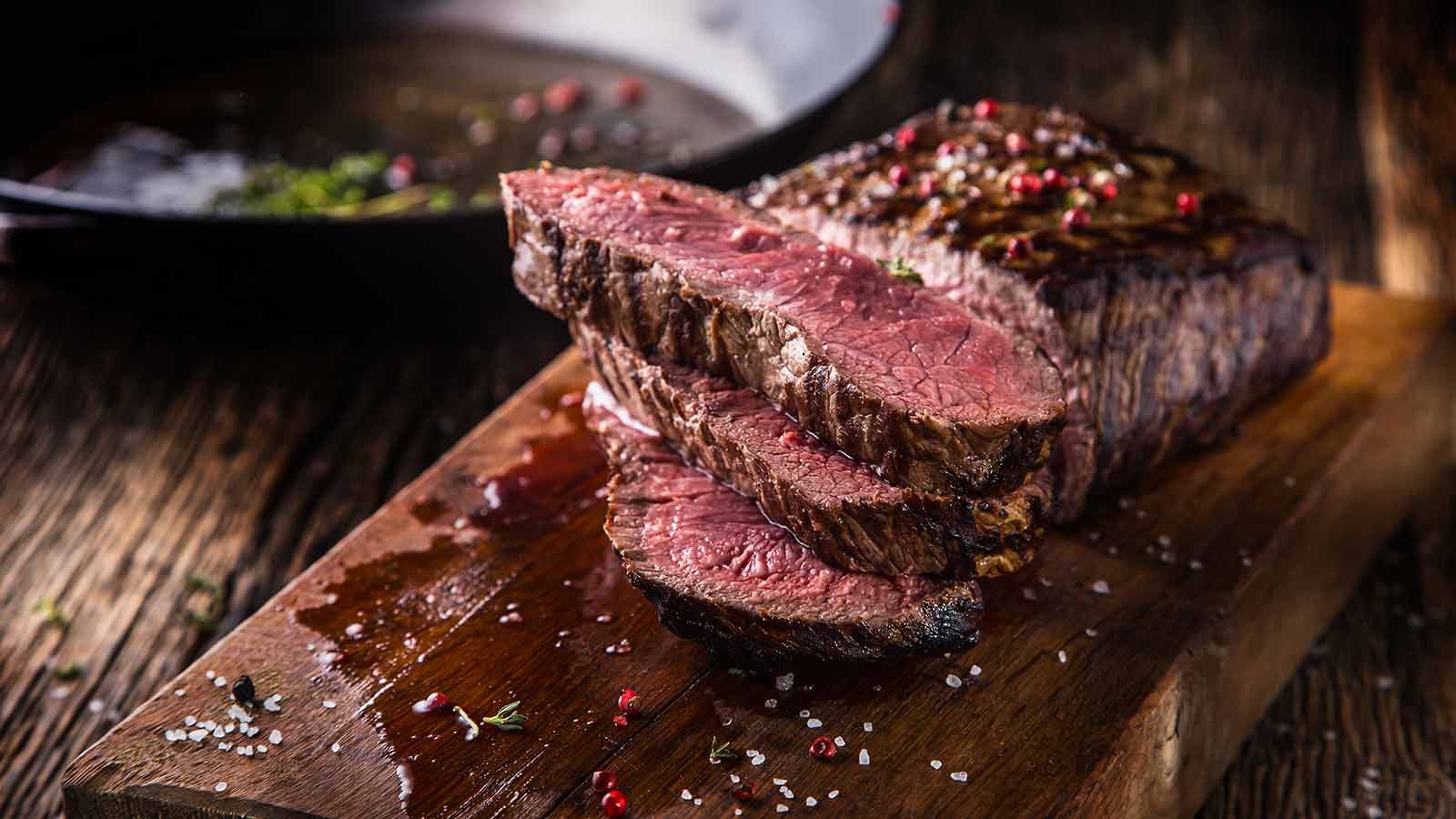