Every so often, an old health elixir resurfaces into popularity and becomes the talk of social media. This time, it’s the case of jamu juice, a South Asian herbal drink that delivers various health benefits with a punch.

Travelers who’ve had the pleasure of visiting Indonesia might be well acquainted with jamu juice, as it’s a fixture in local tradition. With a rich history and significant cultural impact, this health tonic might just become the most intriguing drink you’ll enjoy this summer. And despite its exotic name and high status, jamu juice contains very simple ingredients, so you won’t have to worry about ordering from specialty shops. Everything you need is at your local grocer.

What Is Jamu Juice, and Where Does It Come From?

Jamu juice is a traditional Javanese drink that is, today, most closely associated with Indonesia. The is made of herbs, spices, roots, and fruits. While it holds strong ties to Ayurveda medicine, ultimately, it was the product of centuries of cultural influence from many different countries.

Why is it more associated with Indonesia than its country of origin, Java? Indonesia boasts a strategic location that, for many years, was a trade nexus between populations from different parts of the world. During that period the jamu made its way from Java to Indonesia where the local population adopted it as their own. Over time it became such a cultural staple that it was eventually recognized as a piece of intangible cultural heritage by the Indonesian Ministry of Education and Culture.

As such, you’d think there would be a master recipe but there are a thousand and one varieties of jamu. Since imported goods weren’t reliable nor readily available to everyone back in the day, the locals came to adapt original recipes to fit their immediate surroundings, using foods that they were familiar with and could easily source.

Despite there being no true master recipe, most of them share common ingredients that can be found anywhere in Indonesia and abroad, such as turmeric, ginger, cinnamon, cardamom, lemongrass, and tamarind.

Traditionally, the ingredients would be pounded in a mortar to extract all the rich juices before boiling them in the water to blend them all together and fully extract the benefits. Nowadays, blenders do the job just fine.

What Are the Health Benefits Of Jamu Juice?

Jamu is considered a cure-all in Indonesia. In part, this is because there are many versions of this herbal drink that can be prepared for specific ailments. But it’s also because of the well-established benefits of the main ingredients: turmeric and ginger.

Turmeric is a potent anti-inflammatory and rich in antioxidants. Inflammation is known as the root cause of many illnesses and free radicals cause oxidation in the body, contributing to aging and numerous health problems.

Ginger is known to support digestion and relieve pain. So whether it’s an upset stomach or even period pain, ginger can provide relief. Like turmeric, it too boasts anti-inflammatory properties.

While we certainly can’t promise jamu will cure what that ails you, as far as drinks go it’s certainly not a bad idea to drink something packed with nutrients.

Now that you know where jamu comes from and how it can give you a boost, you might be curious to give it a try and make some for yourself at home. Here are some varieties for you to experiment with!

This is perhaps the most popular version of jamu juice you’ll find around Indonesia (and anywhere else outside the country). It contains the most basic ingredients and it’s the perfect introduction to this exotic herbal elixir.

If you’re looking for something more aromatic, you should try this tamarind-based jamu. The recipe also offers a few appropriate variations just in case you want to make it more suitable for your palate.

Get the Recipe: What To Cook Today

In need of something more refreshing? Try this lemongrass jamu. Between the herbs and spices, and the palm sugar, the flavors are perfectly balanced to give your day a revitalizing kick you’ll highly appreciate.

Get the Recipe: New Malaysian Kitchen

Trying new drinks is always fun. If they have an interesting background story and potential health benefits, even better! Jamu juice is the complete package. Try any of these recipes and let your taste buds enjoy the ride! 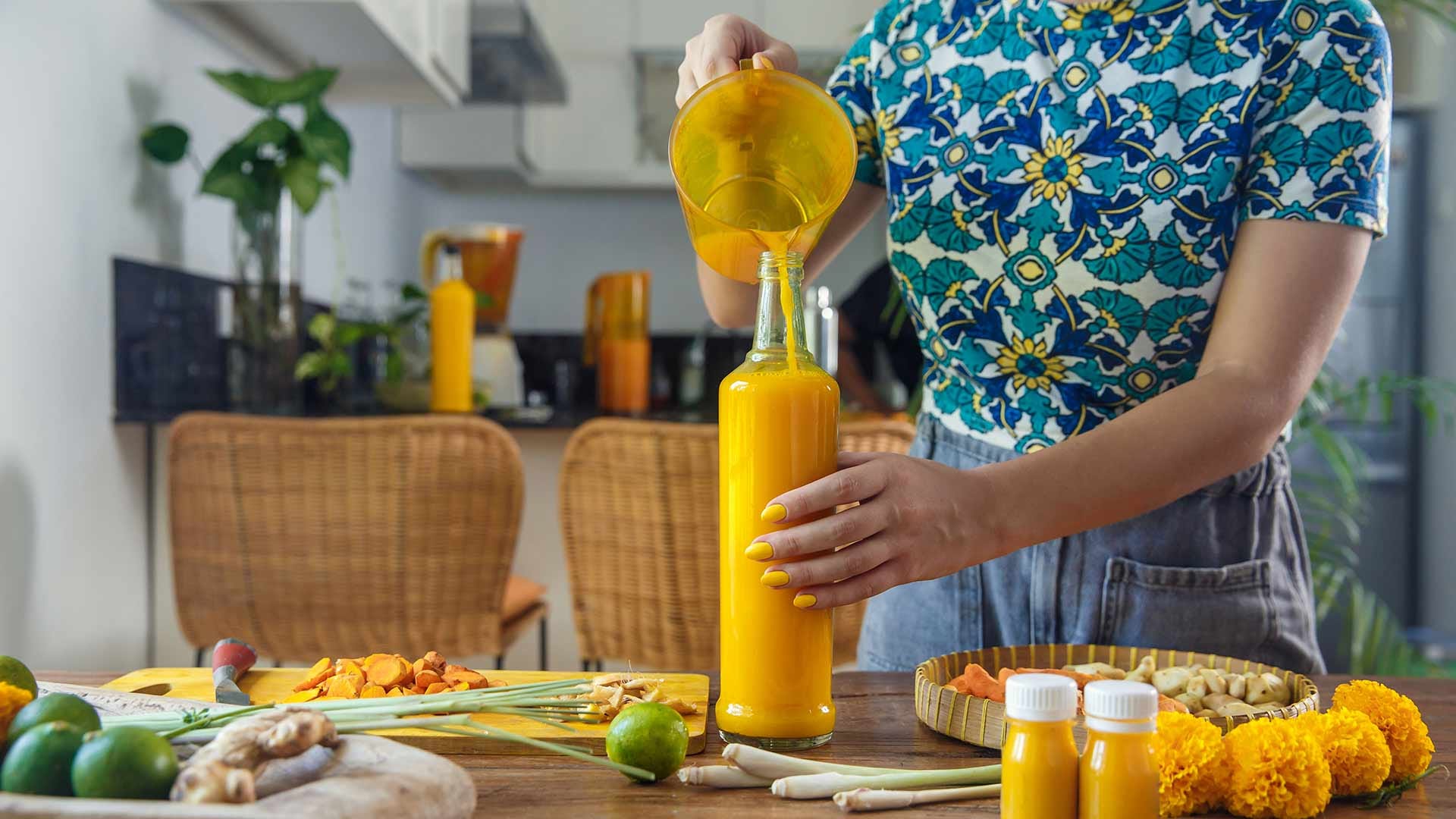