Corn on the cob is an incredibly popular summer and fall dinner staple. But the way most people prep it, by boiling it in a pot, missed out on some serious flavor. Here’s why you should throw your next batch of corn on the grill.

When it comes to corn on the cob prep there’s a default method the majority of us default to, we remove the husk and then boil or steam the corn in a big pot. While this common method does the trick, did you know that there are many grilling techniques for preparing corn on the cob? All of which are far more flavorful than the ol’ hot pot treatment? Maybe you’ve already planned to throw burgers and dogs on the grill, so why not add a few ears of corn as well? Let’s take a look at three simple methods for grilling fresh corn on the corn.

Three Ways to Grill Delicious Corn on the Cob

RELATEDHow to Select and Grill the Perfect Pineapple

Grilling is such a great way to add flavor to so many different things from pineapple to sweet corn you’re, hopefully, about to slap on the grill.

The combination of direct heat and the smokiness of the grill imparts a complex flavor profile that boring old boiling or steaming just can’t compete with.

Leave the Husk On

Shucking corn at home is the not-so-fun part of cooking corn on the cob. Luckily, many supermarkets and grocery stores offer large trash cans, so you can take care of it right there. However, if you find yourself at home with a pre-shucked abundance, there is a way to prepare that white and yellow goodness without making a big mess.

Corn silk (often referred to as corn hair)—the frilly ends on the ear of corn—tends to get everywhere. Because it’s attached to the corn, getting rid of it sometimes feels impossible. Here’s how to avoid this nuisance.

Wrap It In Foil

Individually wrapping your corn in aluminum foil is another way to make this grilled treat and will leave your sweet and crunchy maize with a freshly steamed appeal. Follow these seven steps.

Grill It Right on the Grates

With multiple ways to grill corn on the cob, you might think each method is the best. However, cooking with no husk and no foil happens to take the least amount of time, uses the least amount of materials, and you don’t need to dirty pots and pans to prepare it.

Follow out these five steps and learn to make slightly charred and oh-so-heavenly grilled corn on the cob.

We all know butter is the most common ingredient to add to your sweet corn, but ever try other fun additives? Whip a stick of butter with a drizzle of maple syrup and a pinch of cinnamon. What a perfect way to enjoy your corn this autumn.

Cooked shallots or roasted garlic mixed in with your butter before dousing your side dish is another yummy option.

Nutritional yeast is a popular vegan ingredient used in many dishes as a seasoning or substitute for cheese.

Sprinkling this on top of hot kernels is a healthy and tasty way to add a nutty taste to each bite. Why not give it a try?

Speaking of cheese, if you’re a devotee of the delicious dairy product, then add a bit right before chomping down. It will add savor to your sweet and will make you want more. Sprinkling goat or feta cheese on corn is very popular, but parmesan also adds wonders to each delicious bite.

In fact, speaking of delicious things to put on your corn on the cob, it’s a safe bet that if you would want to sprinkle or drizzle it over nachos or tacos there is a good chance that it’ll taste delicious with your freshly grilled corn on the cob. Sour cream? Hot sauce? A splash of lime? Bacon crumbles? Have fun experimenting!

Freeze Some for Later

Finally, let’s address a common corn buying problem: too much corn. It’s cheap, it’s so hard to pass up buying a big bag of it at the farmer’s market, and it feels bad letting it go to waste. If you have an overload of corn, have no fear. We have an easy solution to your not-so-bad problem: Freeze this in-season delight, so you can enjoy it during the holidays and months after, too. And do so without fear of yucky re-heated corn down the road as corn freezes very well.

Freezing the fresh cob is possible but it takes up a ton of room in your freezer and it makes using the corn later in recipes a big hassle because you have to thaw the corn and start the preparation process from the beginning as if it was bought fresh. That’s a bit of a hassle and keeping the cob intact can sometimes give the end result a rubbery texture.

To avoid wasting space in the freezer and make life easier when we go to use the corn later, do a little prep before freezing. You can simply grill more of it and make a batch of delicious roasted corn to sprinkle on dishes at a later date. Or if you’re done grilling and want to get the leftover corn in the freezer, you can remove the husks, blanch your corn by boiling it for four or five minutes and then transfer it directly to ice-cold water.

Let your corn rest until it’s completely cooled. Using an electric knife, slice off the kernels and transfer them to a vacuum-sealed bag. You could always use a Ziploc bag and just do your best to push the air out, but vacuum sealing will keep the food fresher longer.

Once you grill your corn, you’ll probably find it hard to go back to the easy (but not particularly flavorful) boiling routine. The grill just imparts too much flavor to pass up! 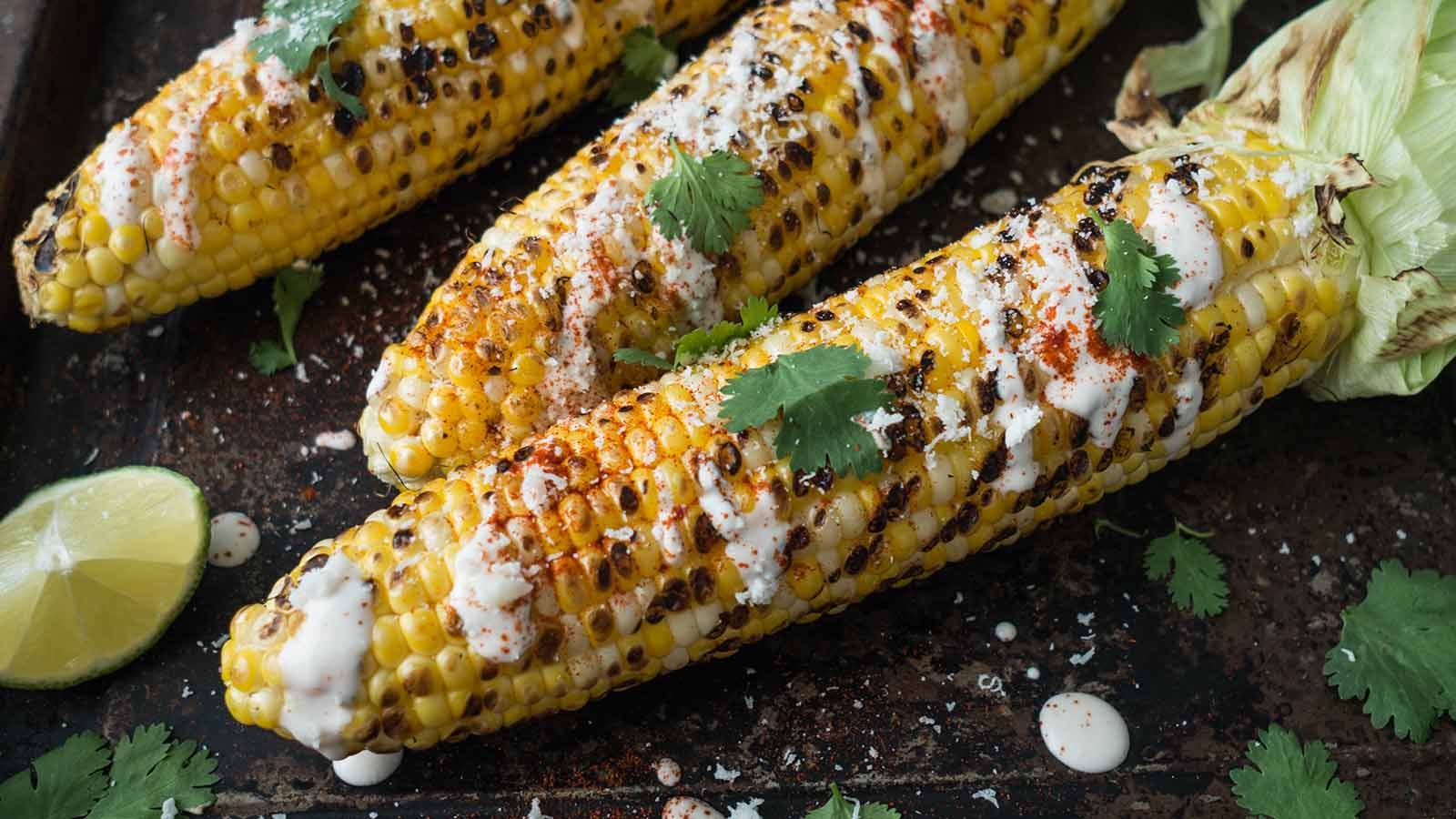 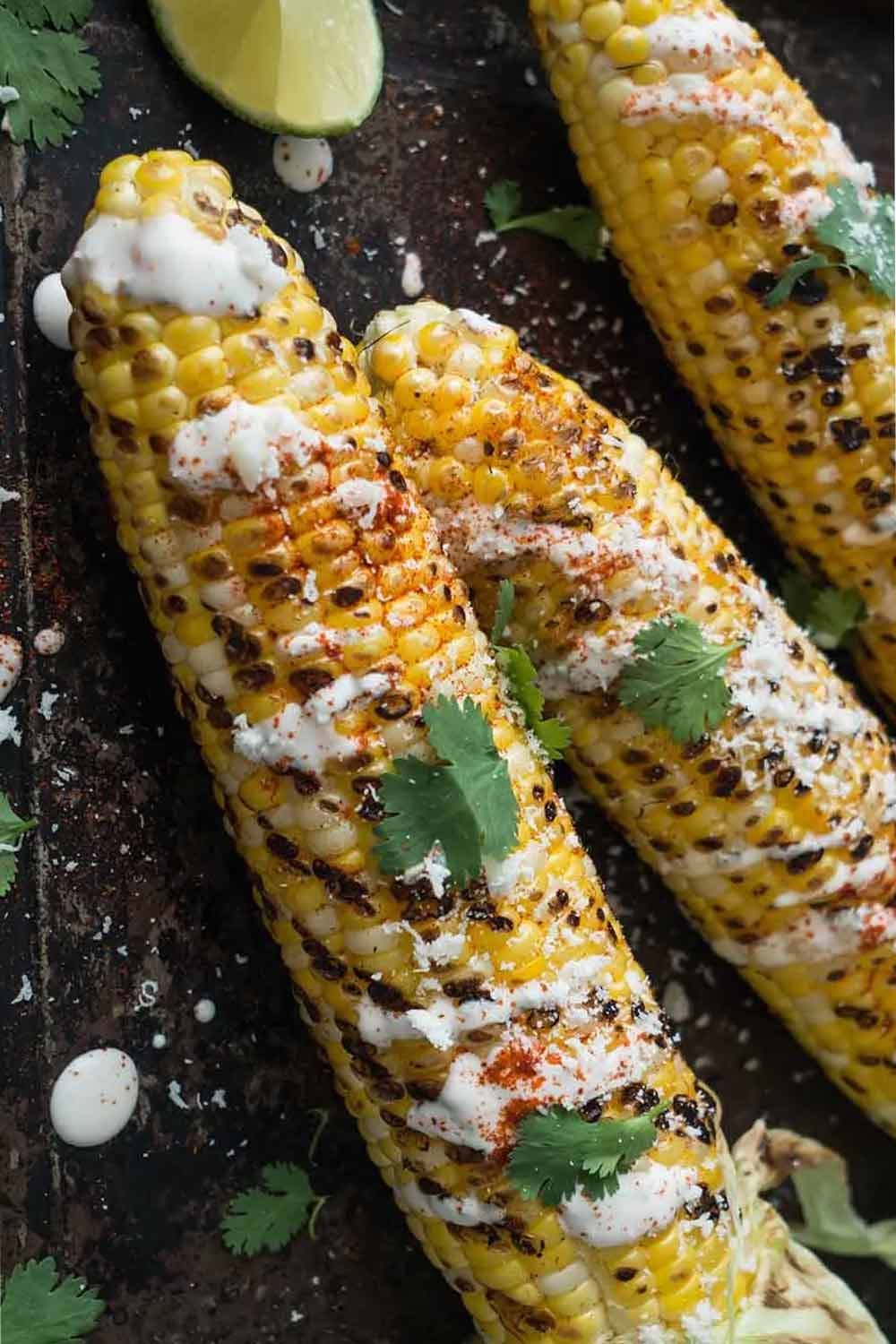