Chips and dip are a party stand-by, but sometimes they’re not enough. That doesn’t mean we want to linger around a hot stove while the party’s going on. Learn how to create a five-star, finger-food feast, without the oven.

Whether it be an engagement party or a holiday soiree, sometimes the occasion calls for food of a higher caliber. Slow cooker cocktail weenies and potato chips fresh out of the bag won’t suffice.

That doesn’t mean things have to get complicated. Beautiful canapes, the kind you expect at a wedding on a silver tray, can be easy. We’ve put together a list of five appetizers that are ornate enough for the fanciest of affairs, but so simple you won’t need to turn on an oven. It doesn’t get better than that. Let’s dive in.

Baby bell peppers are in most grocery stores these days, and we couldn’t be happier about it. These sweet peppers make the perfect vessel for goat cheese, although cream cheese would work too. Add in some fresh herbs and these little guys will disappear faster than a slushie in a heat-wave.

To make 16 stuffed pepper appetizers, slice eight baby bell peppers in half length-wise. In a bowl, mix a 1/2 cup of goat cheese, one tablespoon of minced basil, and two teaspoons of honey. Stuff the peppers with the cheese mixture and serve!

Crostinis are the ultimate in foods that sound fancy but come together fast. The hardest part about them is the assembly, but we’ve found that even small children can put these together. Of course, you don’t have to use Mediterranean inspired toppings (as we list below). Use your favorite toast toppers to create an inspired party snack.

To make 24 crostinis, slice a store-bought baguette into 24 – 1/4″ rounds. Some stores sell bruschetta rounds already sliced. Look for those to save yourself even more time. Toast the rounds using a non-stick skillet (or in a toaster oven if desired). Toasting baguette rounds will go quickly, we promise, but if that’s too much for you, pick out a hearty cracker to serve this on instead.

In a small bowl mix together (1) large mashed avocado, (1) seeded and diced cucumber, a 1/2 pint of halved cherry tomatoes, and 1/3 cup of Feta cheese, with salt and pepper to taste. Spoon the mixture onto the rounds and serve with a drizzle of high-quality balsamic vinegar.

Caprese Skewers are a staple for weddings and events throughout the U.S. There’s no question as to why. They’re uncomplicated, everyone loves them, and they look pretty on a plate. So, of course, we had to include them here.

For each desired skewer you’ll need, (1) mozzarella pearl, (1) cherry tomato, and a small basil leaf. We recommend folding the basil over itself and skewering it between the cheese and the tomato.

Serve these with a small bowl of olive oil and balsamic vinegar for dipping.

If you’ve ever tasted a smoked salmon blini, this is that, except easier. Instead of making a small pancake for each appetizer, we’re just layering creme fraiche and smoked salmon on a potato chip.

We know, we said no chips, but we’d argue this is a far cry from the traditional chips and dip idea. We’ve yet to attend a party where this didn’t go over well, so we’re daring you to try it.

For each potato chip, we added one teaspoon of creme fraiche and a small piece of smoked salmon. For bonus points, garnish each piece with a little sprinkling of fresh dill.

If you’re into fancy appetizers, you’re probably well familiar with this one, but we’ve included it because it’s always a hit. The trick to making this one memorable is to use perfectly ripe and in-season cantaloupe or honeydew. If the melon isn’t in season, consider wrapping goat cheese stuffed dates or fresh figs.

How we did it:

Create fruit spheres with a melon-baller or slice the melon evenly into wedges. Wrap the melon pieces with prosciutto, secure with a toothpick if needed, and garnish with mint if desired. Serve cold. 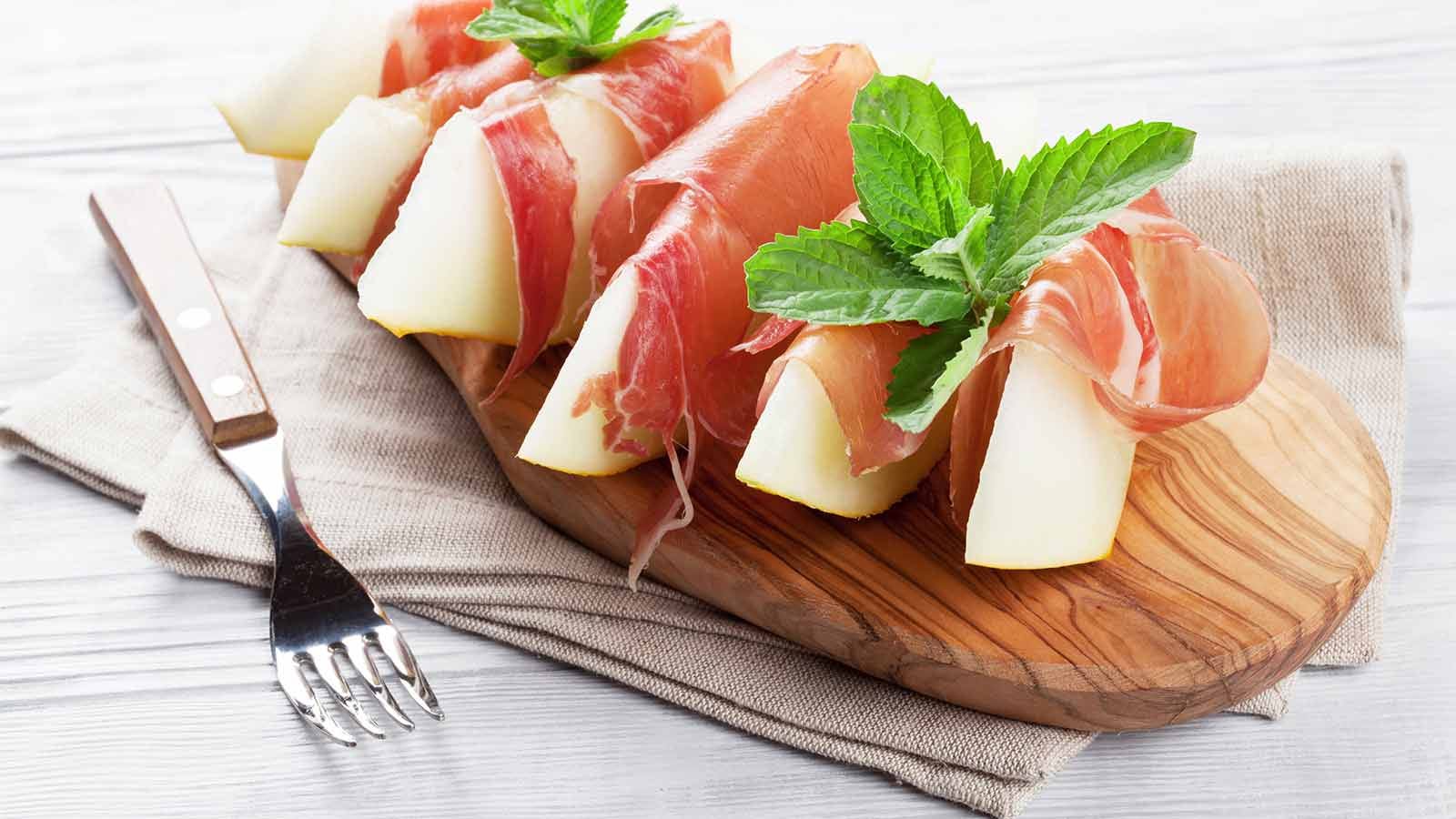