So you’re a bit of a chocoholic, but you’re tired of plain, old brownies. What’s next? Easy—just a few simple tricks can turn your brownies into deluxe desserts!

Fudgy, delicious brownies are a classic chocolate treat, but it’s easy for basic recipes to feel a little repetitive after a while. The great news is, you don’t have to be an expert baker to mix things up and create gourmet-style brownies at home!

All you need are a few extra ingredients and some simple tips, and you’re well on your way to creating a dessert that looks and tastes like it should be in a bakery window.

How to Get More Intense Flavor

Getting a solid chocolate flavor is the most important part of any brownie recipe, whether you’re starting from a boxed mix or making your own from scratch.To really emphasize and deepen the chocolate flavor, try adding a teaspoon of espresso powder to the batter.

If you’re worried that this will turn your brownies into coffee-flavored brownie bars, don’t worry! You’re not adding nearly enough espresso powder for its flavor to overwhelm the chocolate. Instead, it functions as a chocolate booster, intensifying the flavor and giving it a little more complexity and depth.

This instant espresso powder is the secret to big coffee taste in your desserts.

How to Make Richer, Gooier Brownies

The slightly dense, fudgy texture is really what sets brownies apart from just chocolate cake. If your favorite regular recipe still isn’t quite gooey enough for your taste, there’s a really simple hack! Just add one more egg yolk (just the yolk—you’ll need to separate out the egg white) to the batter.

Is there anything that goes together as well as peanut butter and chocolate? Upgrade your plain brownie recipe with the addition of some peanut butter! After mixing up the batter, add about 1/2 cup of peanut butter baking chips to the batter and stir them in—making sure they’re relatively evenly distributed—before pouring the batter into the baking pan.

Want to really take things to the next level? Let the brownies cool completely, then whip up a batch of creamy peanut butter frosting to spread on top.

It doesn’t have to be a fancy, complicated recipe, just a basic buttercream, like the peanut butter frosting (seen above) from Sugar Spun Run. Essentially, it’s equal parts butter and peanut butter, plus powdered sugar, vanilla extract, and a bit of milk.

Tip: You can adjust the consistency of your frosting easily! If you want thicker frosting, use a little more sugar; for thinner frosting, more milk.

But if you want to make your simple frosting recipe look very fancy, you can always load it in a pastry piping bag to give it that bakery-fresh look!

How to Make Mint Brownies

Who says mint is just for the holiday season? You can upgrade your brownies year-round with a hint of mint, which pairs really well with fudgy chocolate brownies. It’s a super simple way to add another layer of flavor to your favorite brownie recipe.

Adding chocolate mint to your baked goods? It's tough to go wrong with classic Andes mints.

How to Make a Brookie

In its simplest form, a brookie is just the delicious union of two beloved desserts: a brownie baked with a layer of flattened chocolate chip cookie dough on top. If you have recipes for both that you love, you can pretty much just layer the two, then bake—just keep a close eye on the baking time, because they can vary quite a bit based on how much moisture is in each recipe, how thick the layers are, and so on.

The basic brookie isn’t your only option, though. You can easily find deluxe brookie recipes that add ingredients like nuts, marshmallows, candy pieces, cookie bits, and more! One decadent treat is the Oreo S’mores Brookies (above) from Picky Palate.

Start with a brownie base, then add Oreos, graham crackers, and mini marshmallows, plus chunks of your favorite cookie dough! The result is a gooey, super-chocolatey treat that brings together the best of several desserts.

Want to keep the gooey goodness but have nice firm edges, both for the texture and the ease of eating? Try baking your brookie in a brownie pan with built-in dividers.

How to Make Nut Brownies

Another easy hack for when you want to tweak a basic brownie without too much hassle. Simply chop up your favorite nuts—about 1/2 cup should work, although you can adjust it based on your personal tastes—and stir them into the batter as the final step before pouring into the baking pan.

Which nuts work best in brownies? You’ll usually have the best luck with your “classic” baking nuts, such as pecans and walnuts.

Almonds are a little harder, but they can add some delicious crunch and flavor, too.

How to Make 7-Layer Brownies

There’s a pretty good chance you remember 7-layer or “magic” bars from a potluck or gathering at some point in the past. Now, imagine that same gooey decadence, but melded with a perfect fudgy brownie for a deluxe brownie bar that’s super easy to make!

Tip: If you don’t use all the condensed milk, pour the remainder into a glass or a small glass bowl and put it in the fridge to use as rich coffee creamer!

The recipe itself couldn’t be easier:

It really is surprisingly easy to upgrade classic recipes with just a few small adjustments. With a few hacks like these and a little patience, you can bake like a pro in no time! 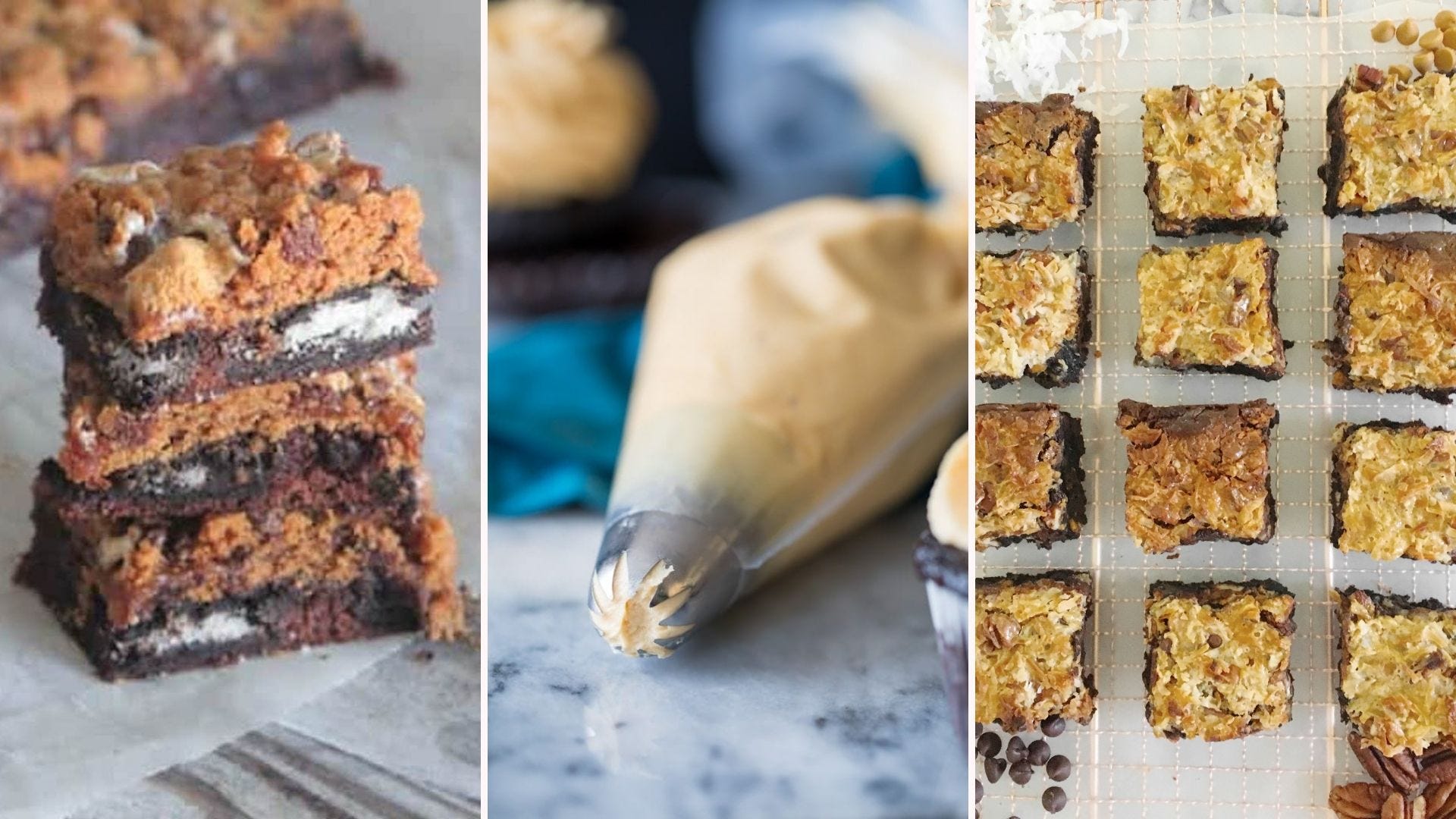 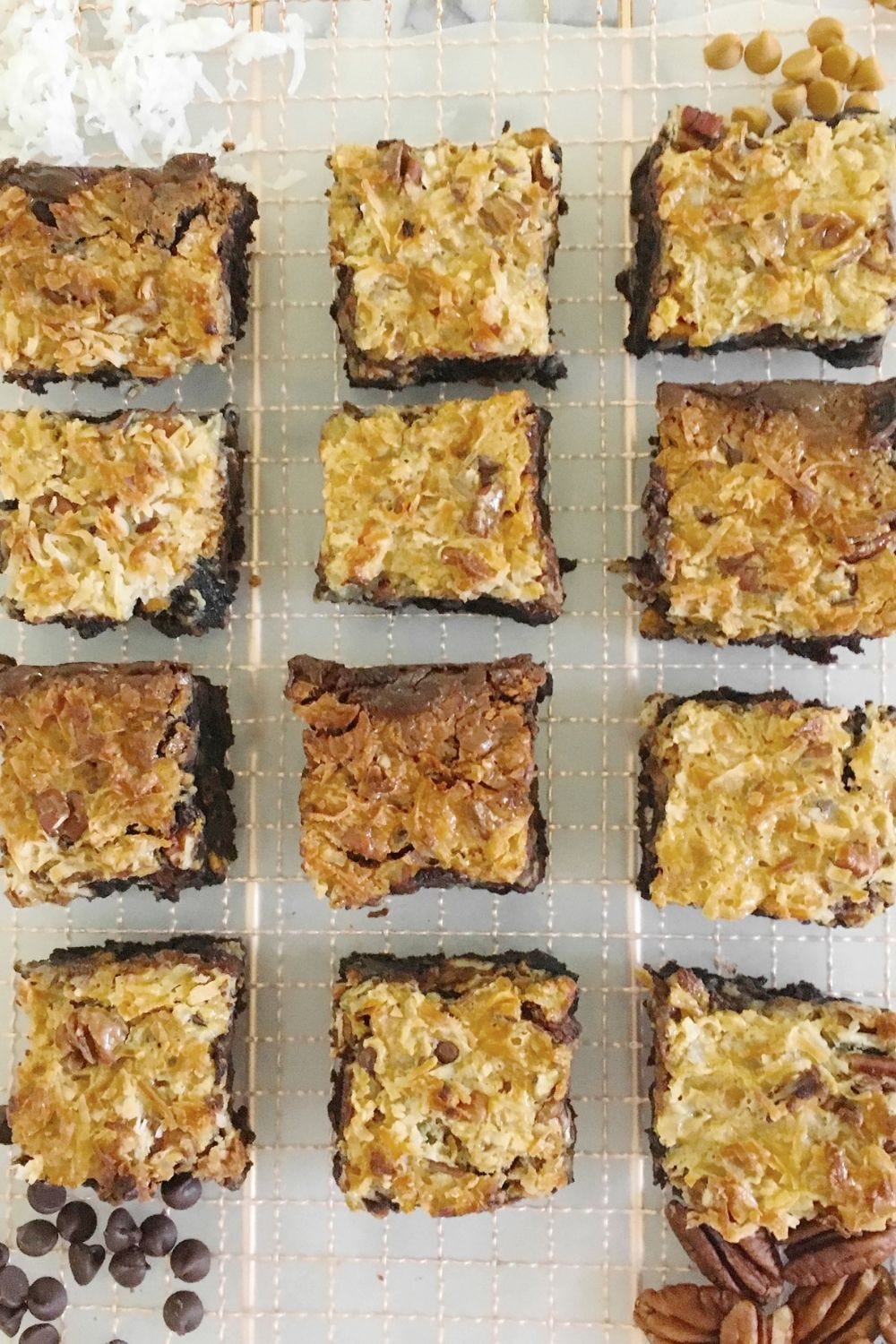