Get into any conversation about cooking, and someone is bound to extol the virtues of cast-iron cookware. But does cast iron really make such a big difference? And if so, why, and how?

For centuries, cast iron has been used for cooking, and there are plenty of good reasons why. Today, the wide variety of modern, nonstick cookware has given cast iron a reputation for being expensive and difficult to use.

However, that’s not necessarily true! In fact, cast iron offers several advantages over alternatives. Here’s everything you need to know about cast iron, as well as some recommendations you might want to add to your cookware collection.

Reason No. 1: Cast Iron Is Nontoxic and Nonstick

RELATED7 Nontoxic Cookware Brands That Are Worth the Money

A seasoned cast-iron pan is, for the most part, nonstick in a fairly nontoxic way. Depending on the individual piece, it might be more or less nonstick, but the following factors can contribute:

The real advantage cast-iron cookware—enameled or not—has over other nonstick materials is its lack of toxicity. This is due to the mechanism by which the nonstick coating forms.

On cast iron, the “seasoning” happens as you use it, with fats from repeated cooking slowly building up, heating, and transforming into a nonstick layer. For cookware manufactured as “nonstick,” the coating happens artificially, with a chemical treatment.

The FDA has noted that a potentially harmful class of chemicals, called per- and polyfluoroalkyl substances (PFAS), are used in nonstick cookware. The research on these substances and their effects is still very much in the developing stages.

Nonetheless, it’s worth noting that cast iron achieves its nonstick results just from regular use, rather than manufacturer-added chemical compounds.

Reason No. 2: Cast-Iron Cookware Is Durable

One of the joys of cast-iron cookware is how durable it is. You can keep cast iron for years, or even decades, while modern nonstick cookware has to be replaced more often. This is, in part, because the nonstick coating tends to scratch or wear off with use, necessitating replacement.

In contrast, cast iron is sturdy and reliable. Although it might be more expensive (but not always) than a modern piece, it will have a much longer life.

In fact, vintage cast-iron pans are often passed down from generation to generation, as they’re still safe and reliable to cook with! A well-maintained cast-iron pan can, literally, last a lifetime and beyond.

Reason No. 3: Cast Iron Isn’t That Difficult to Maintain

You might have heard complaints about cast-iron cookware being especially fussy to maintain. While you certainly can’t just pop it in the dishwasher and let it air-dry, caring for cast iron isn’t that difficult at all!

RELATEDCast Iron Cookware Isn't as Fussy As You Think: Here's How to Clean It

You simply wipe out the pan when it’s still warm to remove any leftover food and cooking oils, and then handwash it with a gentle soap and/or scrubber. Dish soap is safe, but not that effective if you have any stuck-on bits of food.

The key is to get it washed and dried as soon as possible, so dry it thoroughly and immediately with a kitchen towel. To finish it off, re-oil it.

Warning:  You might want to avoid using your nice cast-iron pan when cooking anything with a pungent aroma, like fish or even bacon. The scent can permeate the pan and carry over to your next cooking session.

Reason No. 4: Cast-Iron Cookware Can Benefit Your Diet

It’s not just a myth! Using cast-iron cookware can boost the amount of iron in your diet. Various studies have suggested that iron pans increase the iron content in the foods that are cooked in them.

Typically, the biggest difference is found in relatively acidic foods, like tomato sauce. Other factors include cooking time and the age of the individual pan or skillet used for cooking.

To be clear, though, just using a cast-iron skillet isn’t a remedy for an iron deficiency, nor is it effective on all foods. Still, this is yet another potential advantage cast iron has over modern nonstick cookware.

When it comes to choosing cast-iron cookware, there are plenty of options. You’ll typically find two overarching categories: enameled and non-enameled. Pieces also come in at a wide variety of price points, from bargains to major splurges.

Also, in most cases, a “bargain” cast-iron piece isn’t necessarily poor quality. Rather, it just means the material is less finely worked.

For enameled cookware, the best-known brand by far is Le Creuset. The company sells a variety of smooth, colorful pieces, but it’s mainly known for its Dutch Ovens. You can’t go wrong with a Le Creuset Round Dutch Oven.

These multipurpose pieces are designed for everything from slow-cooking and baking to making soups, stews, and more. The enameled cast iron is easy to clean and largely chip- and scratch-resistant, with amazing, even heating and heat retention. Also, because it’s the enameled cast iron, rather than the classic kind, it doesn’t require any seasoning work.

If you’re looking for something a bit more affordable, the Lodge Enameled Cast Iron Dutch Oven is a fantastic pick from another reputable brand. For under $100, you can get a classic six-quart Dutch Oven, made from durable cast iron with a porcelain enamel finish.

The major difference between the Lodge and the more expensive Le Creuset is the quality of the materials and craftsmanship. Le Creuset is handcrafted in France, while the Lodge enameled line is manufactured in China.

When it comes to traditional cast-iron skillets, though, Lodge is almost unparalleled. Its classic cast-iron line is made in Tennessee with high-quality materials and expert craftsmanship. Plus, they’re fairly affordable.

To get started, the Lodge 12-inch Cast-Iron Skillet is a fantastic pick. It comes in several other sizes, as well, including the mini three-inch all the way up to a 15-inch. They all have comfortable, sturdy grip handles (the 10.25-inch and up have two) and medium-height sides. All pieces come preseasoned with 100% pure vegetable oil, so they’re ready to go right out of the box.

Once you try cast iron, you’ll never go back! To get cooking with your new cast-iron skillet, check out these easy (and incredibly delicious) recipes. 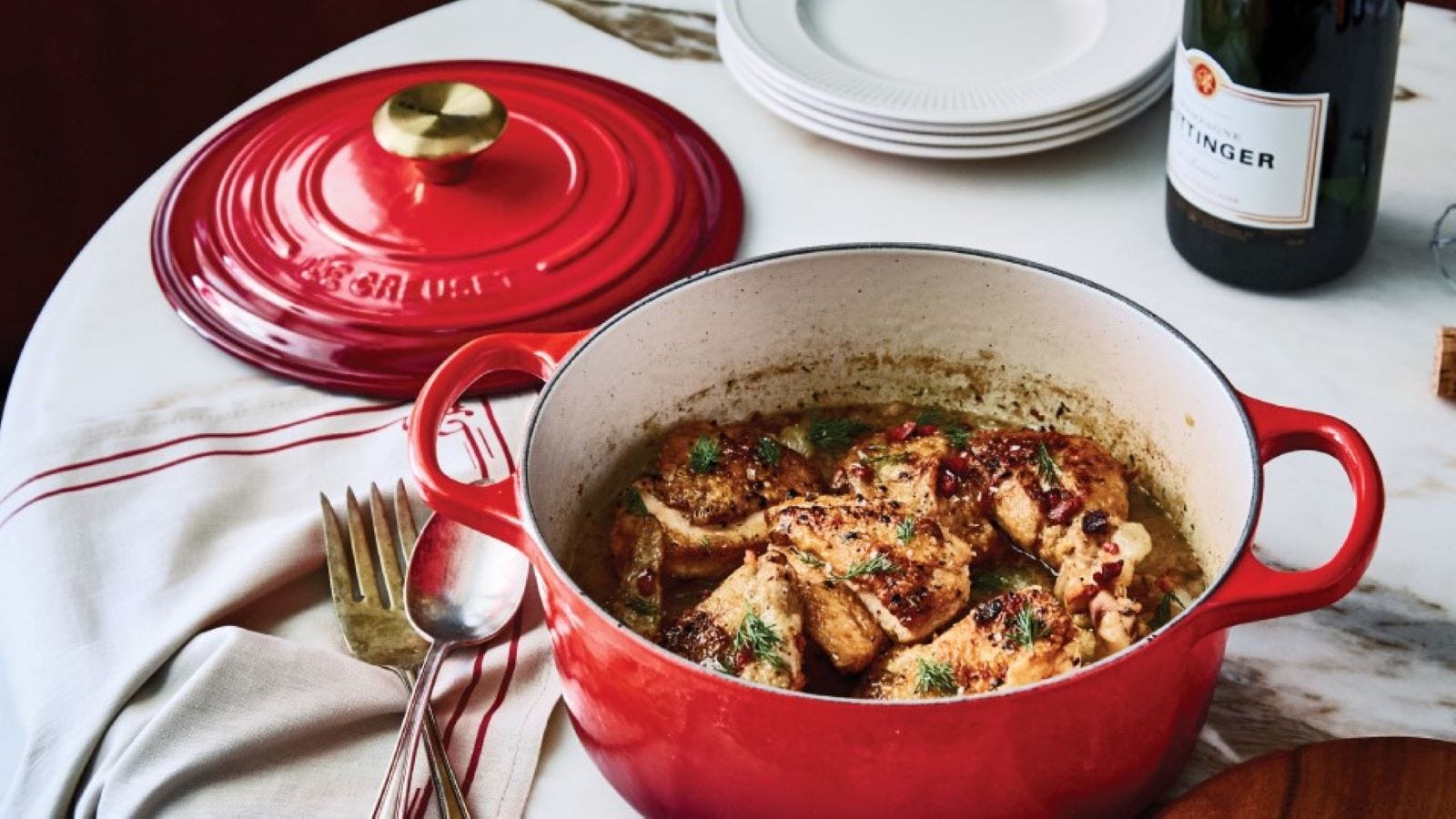 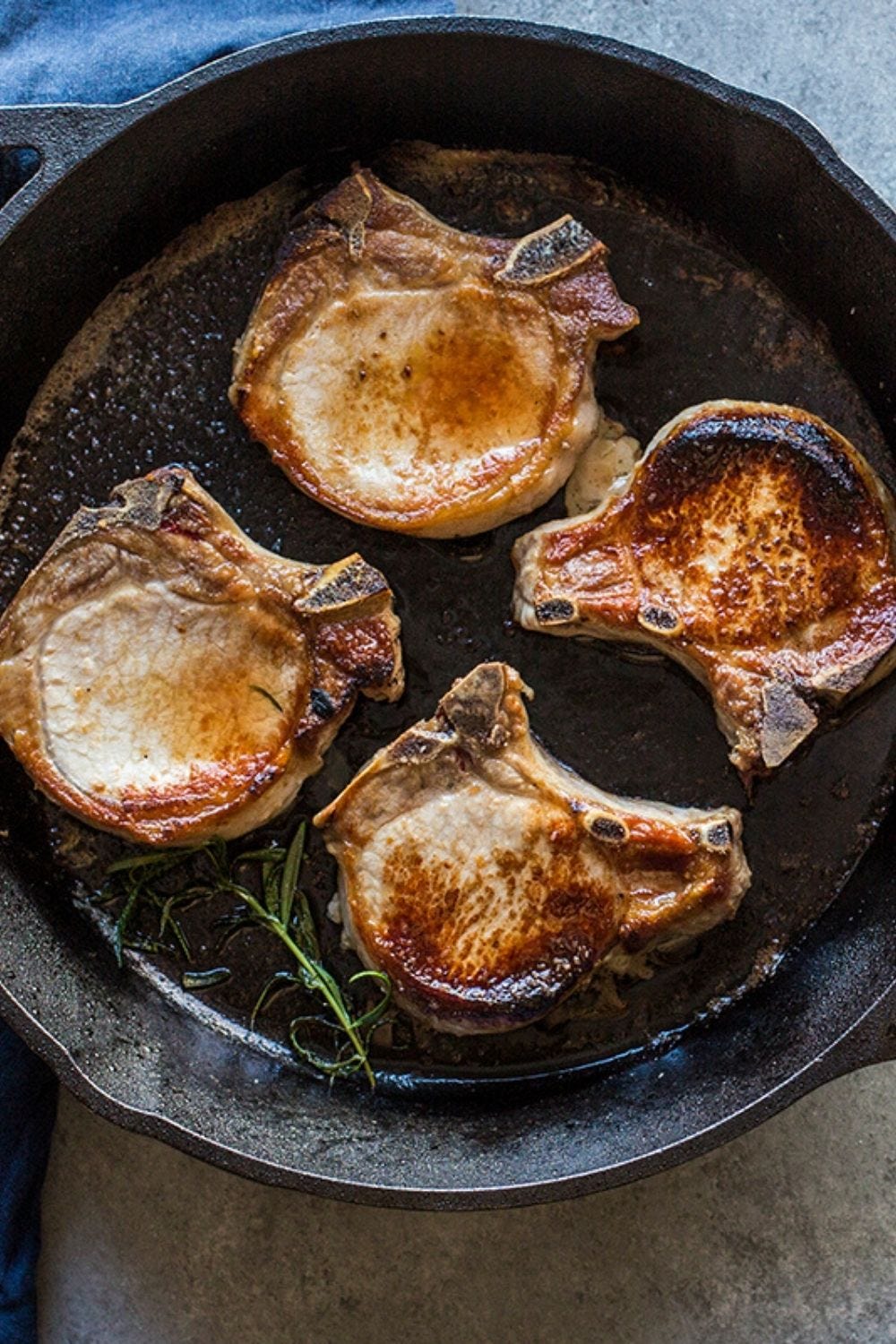