If you fly, it’s a given that at some point you’ll need to spend a long time waiting in an airport. Six-hour delays and ten-hour layovers are far from unheard of. Here’s how to survive layover downtime.

A big part of how a long airport wait feels depends on whether it’s planned or unplanned. If you have a planned long layover, it’s at least something you picked. On the other hand, if your airline just springs a long delay on you, it’s a pain in the ass and totally messes up your day. The strategy to deal with them, however, is the same—be prepared.

Long waits are just part of air travel. If you fly an itinerary with a connecting flight, there’s a chance the timetable will fall apart. Hell, if you fly an itinerary with a direct flight it could still all go wrong with weather delaying your flight or forcing you to land halfway to your destination. You should always have a plan for what you’ll do if you get stuck.

And, of course, if you know you have a long layover, you should have a plan,too. So, let’s plan it out now before it happens and you’ll be ready to cruise through your layover in comfort.

The Best Option: Leave the Airport
If You Can Get Into a Lounge, Do
Find Somewhere Comfy to Set Up Camp
Bring Stuff to Do
Think Carefully About Food
Keep Up to Date on Your Flight

The Best Option: Leave the Airport

If you’re flying through a major city and your layover is long enough, go back through security, leave the airport, and head off to do some sightseeing.

How long you’ll need for this depends. San Francisco and New York are less than 90 minutes by public transit from their main airports, so if you have an eight-hour layover, it’s probably worth it. On the other hand, there’s not a lot to do around LAX and Los Angeles is so sprawling, you’d probably need to have twelve hours to kill for leaving the airport to be worth it.

RELATEDSpeed Up Your Airport Experience with TSA PreCheck and Related Services

Also, this option is really only good when you’ve got a planned layover. Things can change quickly with delayed flights, so I really don’t recommend skipping off into town then. If the long projected delay becomes a miraculous “Great news, everybody! A standby plane has arrived and we’re leaving within the hour!” moment and you’re not at the airport, you’ll be stuck in town a whole lot longer than you intended.

The leave-the-airport-option also really benefits from tools that aid you in a speedy return, by the way. If you haven’t signed up for TSA PreCheck or a similar service yet, then there’s no time like the present. You’ll be more comfortable leaving if you know you can get through security faster when you return.

If You Can Get Into a Lounge, Do

Assuming you can’t leave the airport, the best thing to do is set yourself up in a lounge. There are normally comfy seats, showers, and free food and drink. It’s the best place to be when you’ve got to wait around an airport.

If you’re flying business class, things are sorted. You almost certainly have lounge access. If you’re not, things are a little trickier, but all is not lost:

More and more airports are starting to add non-airline-specific lounges so don’t just assume that there isn’t one. Check the airport website with your phone or ask an airport employee where the lounges are.

If you can’t get into a lounge, the next best option is to find somewhere comfy to hole up. The website Sleeping In Airports offers guides on the best places in most major airports to settle in for a few hours. Whether you actually have a nap or just lounge about is up to you.

My personal preference is to wander the whole airport to see what’s around (after all, I’ve time to spare) and then stake out a good table in a café or bar. I like something with a comfy seat, a power socket, and ready access to alcohol. A corner booth in a bar is ideal.

One other option worth noting is the sleep capsules that are starting to appear in some airports—mainly in Asia. These capsules charge a fee per hour, but you then have a tiny private space to lie down and relax. They’re normally not cheap, but they might be worth it if your delay takes you into the night—or you want to say you did it so you can tell the story.

Be advised that there typically aren’t many pods even at these airports. If your packed flight just got delayed for hours and you really want to squeeze in a pod-nap, you’ll want to locate and pay for your pod quickly.

Bring Stuff to Do

Once you’re settled in, it’s time to keep boredom at bay. When you travel, you should always have a supply of things to do that will keep you occupied, regardless of power or internet access. It’s hard to beat a good book or magazine as an everything’s-gone-wrong backup. You can also buy them at the airport if you really need to.

Most of the time, however, you should at least have access to a plug so you can charge your gadgets. A tablet loaded up with movies and games is great for all ages.

If you’re traveling with other people, don’t overlook the utility of old-school entertainment options. You can play all sorts of games with a deck of cards and there are some really cool travel-size board games like this pocket-version of the popular game Hive. Time will pass much quicker if everyone is involved in a game and not just clock-watching.

Personally, though, I prefer to use the time I have in the airport, rather than just look for ways to distract myself. I like to pick a project that I haven’t had time to do yet, whether it’s photos that need editing or an essay I want to write, and then use my layovers to get it done—or as much of it done as possible. Because the time would otherwise be wasted, I don’t have to justify not doing actual work and can focus on a personal project or two.

One of the biggest challenges with long layovers is staying well-fed without breaking the bank. It’s way too easy to snack on expensive fast food that just leaves you feeling ill. A lot of people think it’s air travel itself that throws them off and makes them feel cruddy. While that might well play a part, sustaining yourself on the Cinnabon menu is probably the bigger culprit.

If you’re going to be stuck there for a while (followed by a however-many-hours flight) you need to make sure you eat decent meals. If you’re in a lounge, the free food there is normally serviceable and, well, free. Load up on whatever they’ve got, and you should be good to go.

RELATEDEat Healthier at the Airport with These Tips

If you’re not in a lounge or you want something more substantial, then I suggest scoping the whole place out and finding somewhere that looks like it does a decent meal. Don’t just hit up the first pizza place you see. You’d be better off with a premade sandwich from a café or finding a sit-down restaurant somewhere in the airport that serves a wider range of fresh foods.

Or, if you’ve got the forethought, pack your own food.

Keep Up to Date on Your Flight

You’re in the airport not to have fun, but to catch a flight. Don’t forget that, especially if you’re waiting on a delayed flight rather than on a planned layover. Things can change quickly and if you miss your plane, you’re going to be stuck around for even longer. Or, on the upside, you might get a voucher to use for food if you’re stuck for long enough.

Wherever you set up camp, make sure you have a way to keep up to date on what’s happening with your flight. Even a gate change can be a problem if you cut things too fine.

The simplest way to do it is just set up somewhere you can see the airport information boards. That way, you can just glance up a few times an hour and keep on top of things.

The other good option is to monitor things online. Most airports have a website that shows live departure information. You can also use a service like TripIt that will update you automatically when new information comes out about your flight.  You’ll get push notifications right to your phone anytime the status of your flight changes. If you travel a lot, it’s super handy.

Long airport waits—even unplanned ones—don’t have to be sufferfests if you prepare ahead of time. Whenever I fly, I always make sure I’m set for any potential delays or layovers because if you travel enough they’re inevitable—but with a little planning, it doesn’t have to be a stay in airport hell.

READ NEXT
Harry Guinness Harry Guinness is a photography expert and writer with nearly a decade of experience. His work has been published in newspapers like the New York Times and on a variety of other websites, including Lifehacker. Read Full Bio » 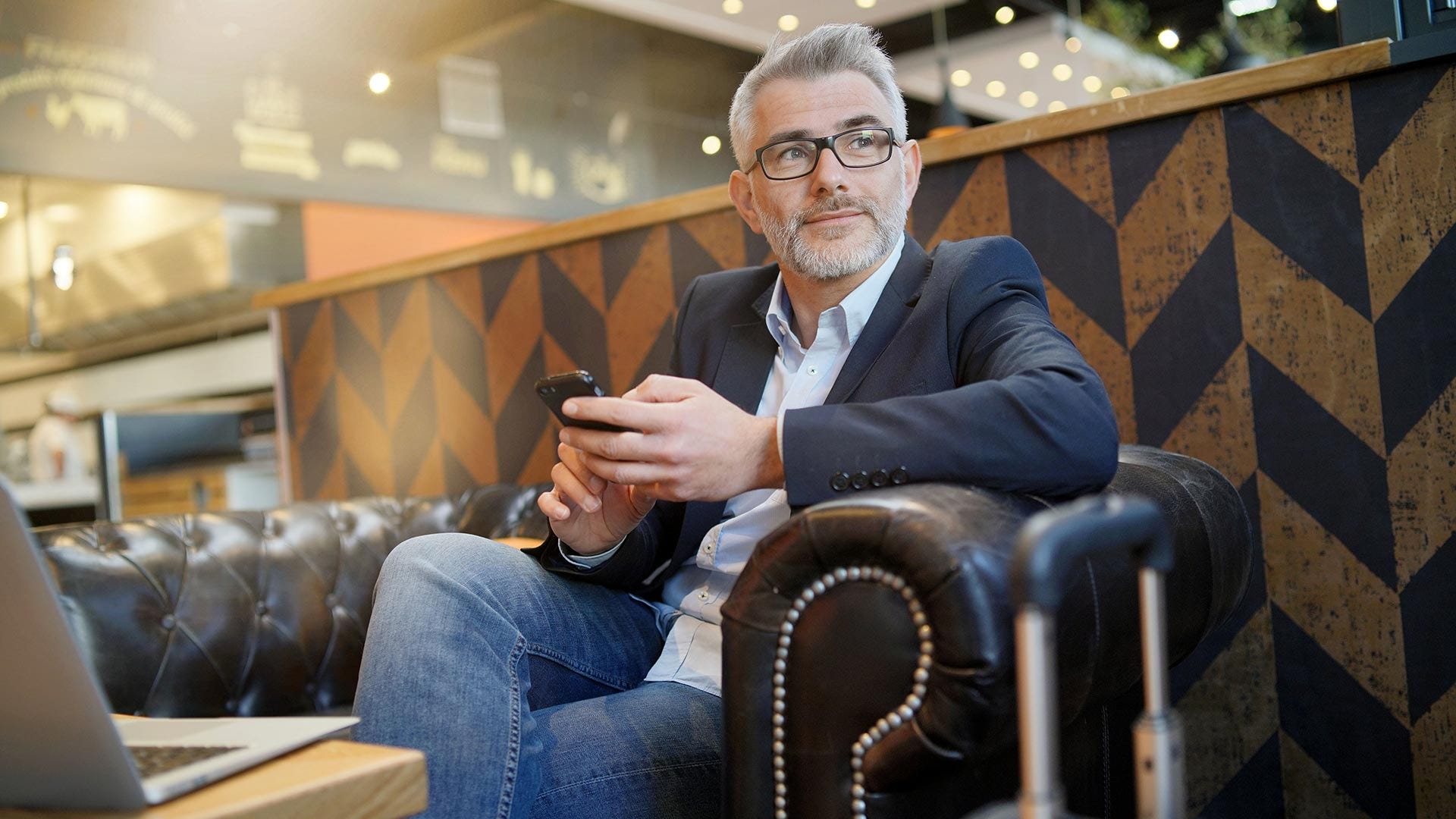 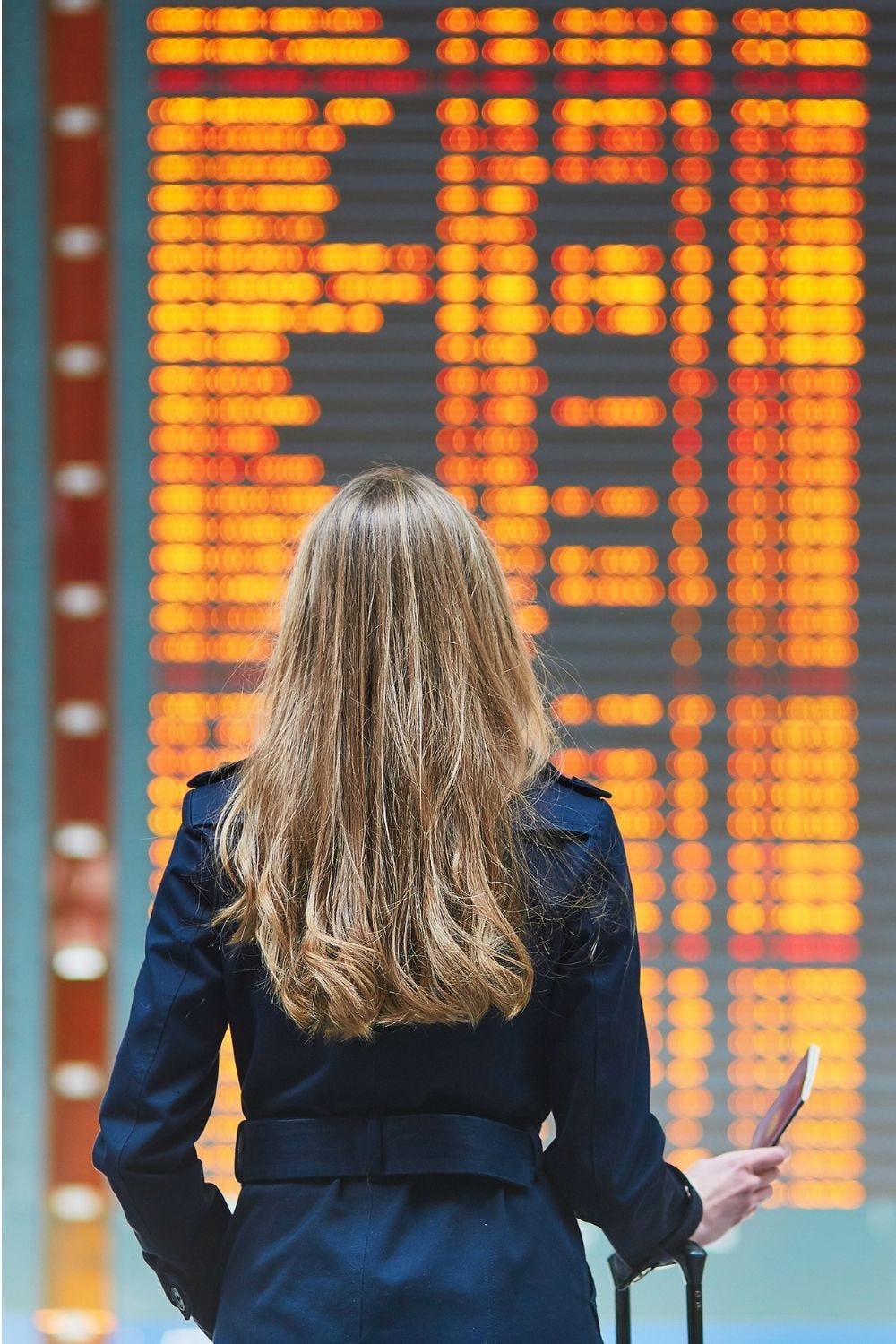