Coffee and tea both have a way of jolting our energy levels when we need a little pick-me-up, but how much caffeine do each of these drinks provide? Does one of them have more than the other?

Whether you like a cup of black coffee, a cup of black tea, or some variation thereof, part of the appeal is the little pick-me-up you get when you drink it—all thanks to the caffeine. But which one has more caffeine and why? Let’s dig into the history of the beloved beverages and how they are prepared to get to the bottom of it.

If you were to study the caffeine content in tea leaves versus the amount of caffeine in coffee beans, you’d notice that tea leaves actually contain more.

However, when you look at a single cup of hot tea or brewed coffee, the caffeine content is different and a cup of tea is less caffeinated. That’s because tea uses fewer leaves to make a single cup than the amount of coffee grounds needed to make a mug of coffee.

One study found that tea bags steeped for a long time in hotter water will make a stronger cup, as more caffeine is extracted that way. So, if you steep your tea for just a short time in cooler water, you’ll have a much weaker cup.

Coffee and Tea Varieties, and Caffeine

The way coffee and tea are prepared, greatly impacts the caffeine content, but is there a difference between dark and light roasts? What about black versus green teas?

RELATEDGiving Up Coffee This Year? Try These 12 Herbal Teas

Black, white, and green teas differ due to their varying degrees of oxidation. That’s why each has different amounts of caffeine. Again, the steep time also affects the caffeine content. If you want the strongest tasting cup, go for black tea.

Below are a few recommendations of each kind:

The full-bodied flavor makes for a perfect pick-me-up.

A soothing cup with a delicate and refreshing flavor.

The Republic of Tea Green Tea

The combination of honey and ginseng will create a calming experience you'll love.

When it comes to coffee, dark roasts might taste more robust, but the caffeine content isn’t that different from the lighter roasts. When beans are roasted, they lose their mass, so the dark-roasted beans become less dense than lighter ones.

Therefore, determining caffeine content really depends on how you measure your beans and not whether your beans are dark or light.

Espresso, which is a more concentrated form of coffee, is brewed differently than other types of coffee and packs a lot of caffeine.

An investment for a future filled with lattes galore!

Ounce for ounce, espresso has more caffeine than coffee, but most people drink more than one ounce of coffee. Espresso, though, is basically a morning gulp rather than a morning cup.

If you were to compare the caffeine content of one ounce of espresso to one cup of coffee, the cup of coffee would actually have more.

Below are a few coffee bean recommendations:

This blend is made from Arabica beans and gives off full flavor and a fantastic aroma.

It’s also important to note that tea and coffee labeled as “decaf” actually do contain minimal traces of caffeine, but these are small enough to be considered insignificant from a dietary standpoint—although people with caffeine sensitivity may find that even the trace amount of caffeine in decaf still bothers them. It’s kind of like how non- alcoholic beer actually has minimal amounts of alcohol, but not enough to be considered an alcoholic drink under law.

Both coffee and tea have a way of making you feel cozy, especially during the cool, crisp days of fall. Speaking of which, have you enjoyed a hot pumpkin spice latte recently? They’re not just for fall! Even if pumpkin isn’t your favorite, making lattes at home is a tasty way to get your daily dose of caffeine. 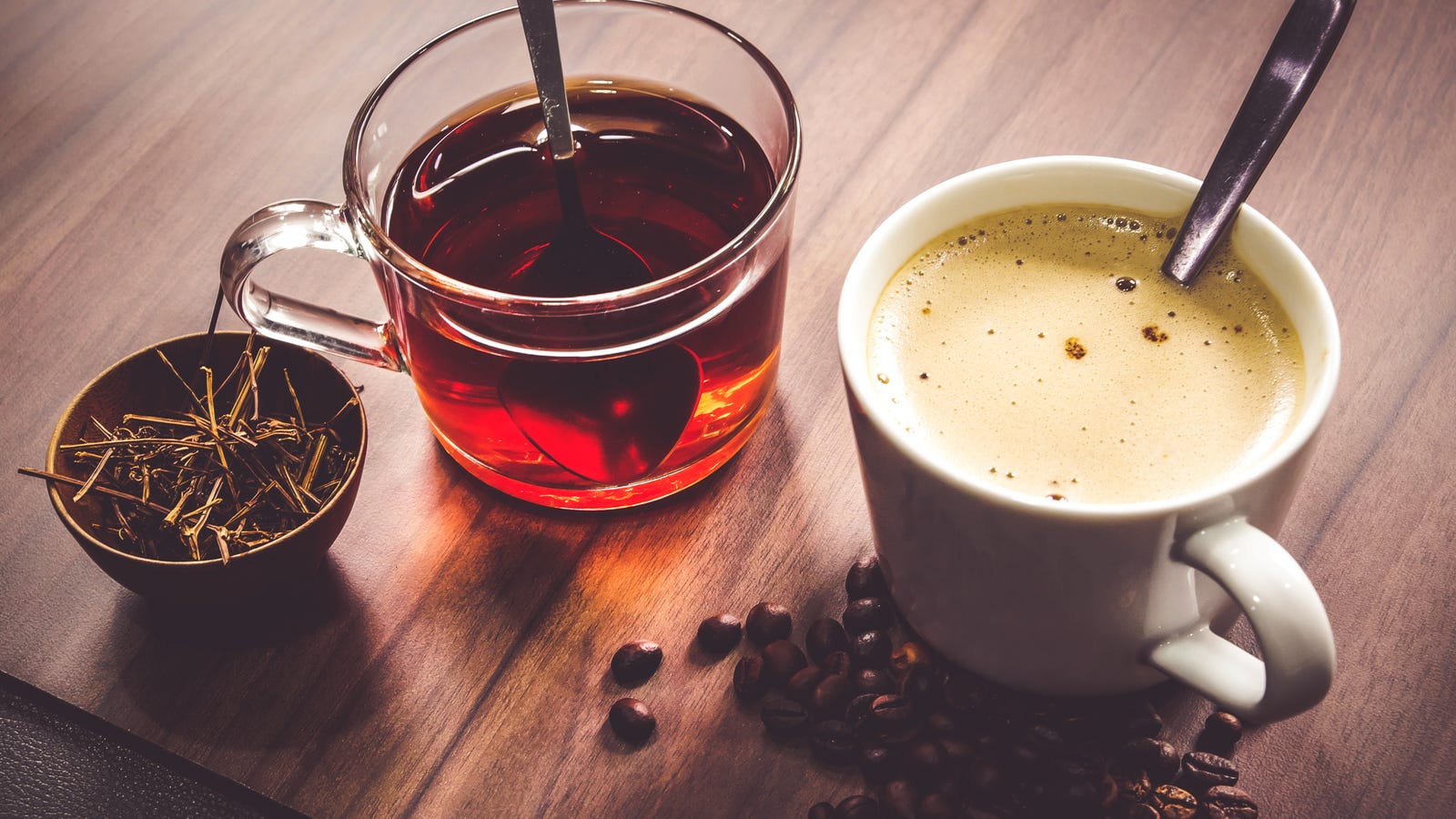 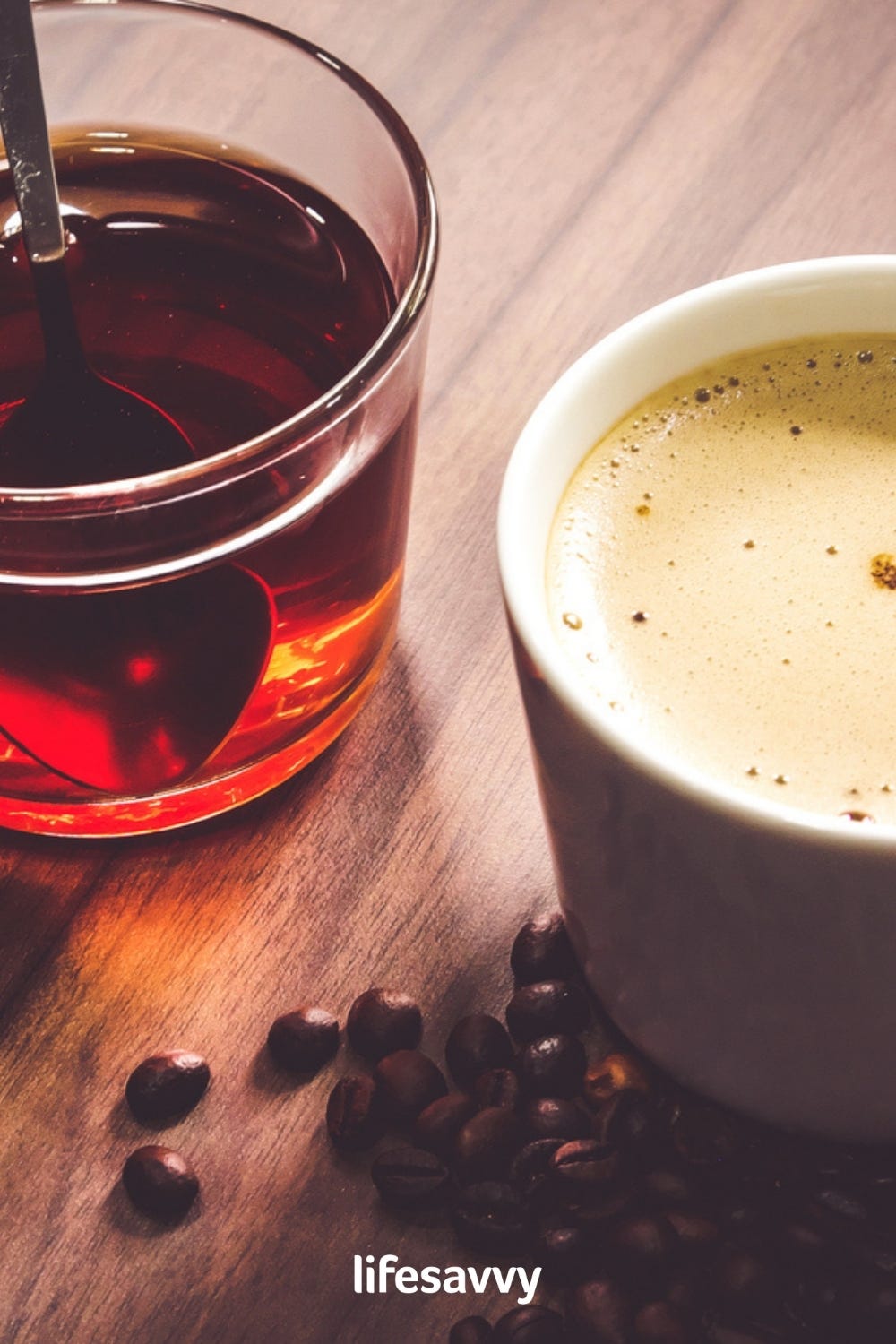