Ever since its 1969 opening at Disneyland, the Haunted Mansion has been one of the most enduring icons of Disney parks. Over the years millions of visitors have marveled at the ballroom of dancing ghosts and been captivated by Madame Leota’s eerie chanting. It’s no wonder, then, that Haunted Mansion-themed merch is a must-have for Disney lovers every Halloween! These fun, creative items are perfect for bringing a touch of classic Disney to the spookiest of seasons.

The Haunted Mansion Pet Bowl is an adorable and hilarious food bowl for all your furry friends. The sturdy ceramic bowl features the iconic Haunted Mansion wallpaper pattern and singing busts on the outside. Inside, the bottom of the empty bowl features an important demand: “Feed Me, Foolish Mortals.”

Not a morning (or, should we say, “mourning”) person? The Haunted Mansion Gravedigger Mug and Spoon Set is exactly what you’ve been looking for to start your day! The ceramic mug features a gravedigger and canine pal, with an “advertisement” for the Haunted Mansion. It also comes with a ceramic spoon, shaped like a gravedigger’s shovel, for stirring up all your coffee to keep you from feeling like the undead.

The Hatbox Ghost is one of fans’ favorite pieces of Haunted Mansion lore. When the original Disneyland ride was first being developed, one planned illusion involved a ghost whose head would periodically disappear and reappear in a hatbox in his hand. Technical difficulties prevented the illusion from being included in the original ride (it was later added in 2015), but fans can carry their own version of the famous illusion with the Loungefly Haunted Mansion Hatbox Ghost Crossbody Purse. It’s a bucket-shaped crossbody bag, perfect for a trip to the parks or just a cute lunchbox!

Happiest Tees on Earth Think of the Happiest Haunts T-Shirt

The Haunted Mansion’s whole appeal is its perfect blend of silly and spooky. That’s exactly the same spirit Happiest Tees on Earth is capturing with their Think of the Happiest Haunts T-shirt! The soft, comfortable black T-shirt features a Haunted Mansion-esque design paying tribute to the Mansion’s famed “999 Happy Haunts” in cheery lettering—and with a full moon lurking in the background.

Disney fans love the detailed, three-dimensional designs of Loungefly bags. The Haunted Mansion Loungefly Crossbody Bag is a fun black-and-purple crossbody purse with the classic Loungefly detailing. Graphic details and “patches” highlight the spooky style and happy haunts of the iconic Haunted Mansion. The front and back side of the purse feature different patches (one with more purple detailing, one with more green), so it’s a versatile and fun way to add a touch of spooky fun to your fall outfits!

The 999 Haunts Mickey Ears are the perfect Disney Halloween product, combining the classic Mickey ears with everyone’s favorite ghosties! These ears feature some of the most recognizable haunts from the Mansion. A gargoyle sits along the headband, where a bow might usualy go, and glow-in-the-dark accents can be found across the band and ears alike.

The Haunted Mansion is just one of many themes your Halloween might take! Whether you’re looking for a more elegant Halloween or just enjoying a kid-friendly holiday, it’s always a fun time to express your creativity and find the perfect balance between sweet and scary. 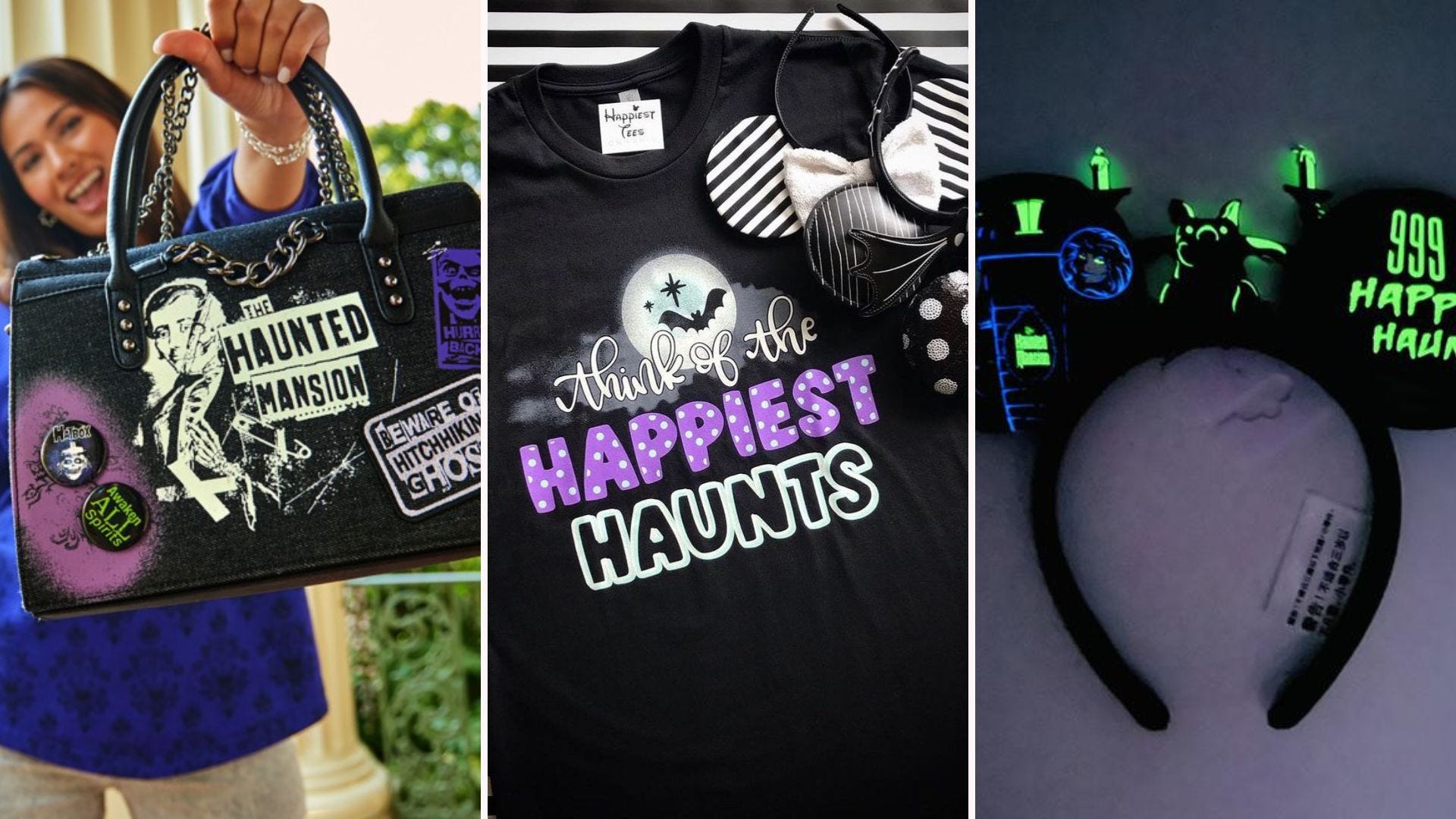 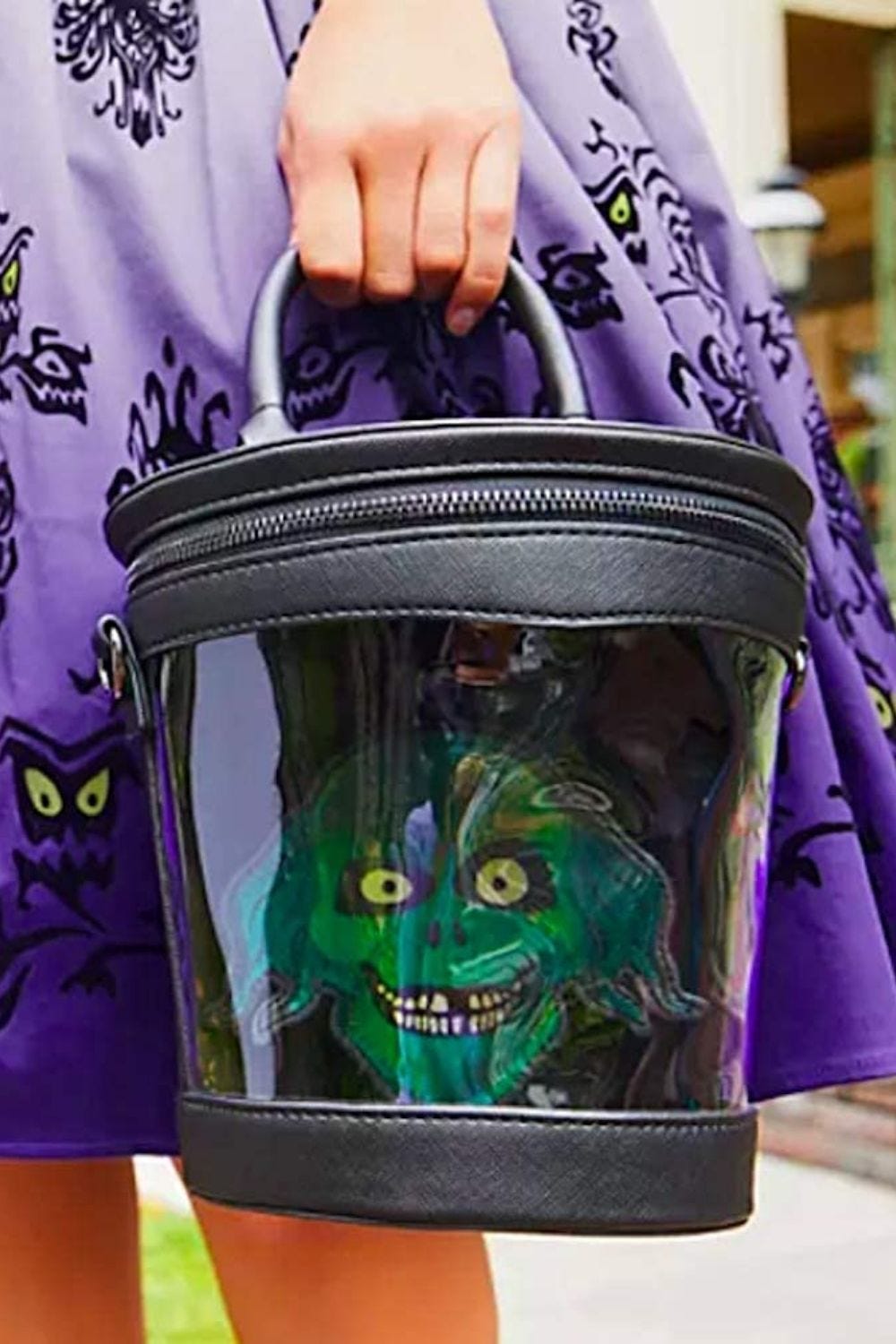