Early fall is the perfect time to branch away from basic button mushrooms and experiment with the wilder varieties. We’re talking Enokis, Chanterelles, and all the other fungi fit for cozy autumn dinners.

Mushrooms are an odd part of the omnivore’s diet. They’re not a vegetable, or fruit, but rather, a fungus. And while that word often triggers vile images of fuzzy molds and dirty pond scum, mushrooms are fungus we’ve fallen for. Their umami flavor and spongy texture are vital components in many dishes.

Most Americans stick to button or crimini mushrooms. But, as we head into fall, other types of wild mushrooms become more prevalent in farmer’s markets and health food stores across the nation. Now let’s be clear, these “wild” mushrooms are either cultivated on farms or found by experienced mushroom foragers.

We do not, under any circumstance, recommend you attempt to forage your own mushrooms. Stick to your local Whole Foods or a trusted purveyor of these wild fungi. Remember, it’s a thin line between finding a morel and meeting your mortality.

Common Wild Mushroom Varieties and Where to Buy Them

Most of us know what to do with a button mushroom or even a portobello. But, there are a lot of other varieties that come in odd shapes and sizes. Here, we’re featuring some of the most common edible forest fungi and listing where you’re most likely to find them in stores.

This book is a must-read for anyone branching out into the flavorful world of wild mushrooms.

Chanterelles: These are native to the Pacific Northwest, as well as parts of the UK. They’re yellow and orange-hued with a fruity scent and a slight peppery flavor. You’re likely to find them in the US from September to early December, especially in Washington, Oregon, and California.

Oyster Mushrooms: These grow in most of the world’s subtropical rainforests, including many regions of the US. They can also be commercially cultivated and so, are often easier to find in grocery stores. While the reason why is unclear, oyster mushrooms do not grow in the rainforests of the Pacific Northwest. So, finding them on the west coast can be tricky.

Shiitake Mushrooms: This earthy mushroom is native to Japan, but is commercially cultivated throughout the world. They can be challenging to find fresh in stores, but dried varieties are commonly available in regular supermarkets throughout the year.

Enoki Mushrooms: These are another commercially cultivated wild variety that’s gaining popularity in the United States, but can still be tough to find. Watch for them at farmer’s markets and in farm co-op boxes from December to March.

Beech Mushrooms: These are foraged for and grown commercially in North America. They are available year-round, but their presence in stores is still limited. In Oregon, a close cousin to the Beech mushroom is cultivated and sold as the highly-prized and popular “Fried Chicken Mushroom.” You can find those and other Beech mushrooms from fall to early spring.

How to Clean and Prepare Wild Mushrooms

When it comes to cleaning and preparing wild mushrooms, the variety doesn’t really matter. You’ll want to use a mushroom brush or a paper towel to remove any loose dirt. If the mushrooms still have bits of packed soil that the towel has trouble removing, you can swirl them around in a bowl of lukewarm water. Remove them quickly though; mushrooms left submerged can become waterlogged.

From there, if the variety you’re using has large gills, you’ll probably want to remove them. This is for aesthetic and textural reasons, rather than because of flavor or safety concerns. Mushroom gills tend to get slimy when cooked, and they aren’t hard to remove. They are, however, hard to clean, which is yet another reason to get rid of them.

You’ll also want to remove the bottom portion of the mushroom’s stem. This is known as the mushroom’s foot, and it’s where clumps of dirt tend to hang on. If you bought your mushrooms in a store, it’s probably already been removed, but if fresh from a farmer’s market, you may need to do it yourself. Some recipes call for the entire mushroom stem to be removed as well. This, as with the gills, is a textural issue rather than a safety or flavor consideration.

How to Cook with Fresh Wild Mushrooms

Regardless of variety, there are a few key points to keep in mind when cooking mushrooms. For starters, mushrooms are mainly water. That’s why they shrink so much when cooked. Conventional cooking wisdom says that the amount of moisture in mushrooms can be problematic. If you crowd the pan, the resulting release of steam will block the ability of the mushrooms to brown. So, most recipes will instruct you to use a large pan and ensure your mushrooms are dry.

Of course, rules are made to be broken. If you’re interested in trying a less-than-obvious, wet-method for cooking mushrooms, the International Culinary Center in New York published an article stating how and why you should.

Whether you use a wet or dry method, there’s one thing every cook agrees on. Mushrooms can withstand long periods of cooking without turning mushy. This means a low and slow saute or a lengthy roast are beautiful cooking methods for any mushroom.

How to Cook With Dried Wild Mushrooms

Sometimes finding fresh mushrooms in a specific variety is tough, but their dried counterparts tend to be readily available. If using dried mushrooms, you’ll need to reconstitute them in warm water first. Use a large container as mushrooms will grow to approximately four times their dried size, and make sure the water covers them completely. Soak the dried mushrooms for 15-20 minutes before using them in your recipe.

For an extra boost of flavor, try using warm wine or broth instead of the water. And, be sure to keep the soaking liquid. It will give your soups, stews, stocks, and sauces a giant umami-packed punch.

In short, don’t shrink away from these odd and varied fungi. Wild mushrooms will add flavor and variety to otherwise conventional dishes. Try them in a homemade cream of mushroom soup and take your thanksgiving casseroles to new levels. Try them in risotto and wow your entire family. Or, simply saute them to perfection and throw them on top of a juicy burger for a weeknight treat. The diversity in color, flavor, and texture found in wild mushrooms is sure to make your favorite fall dinners that much better. 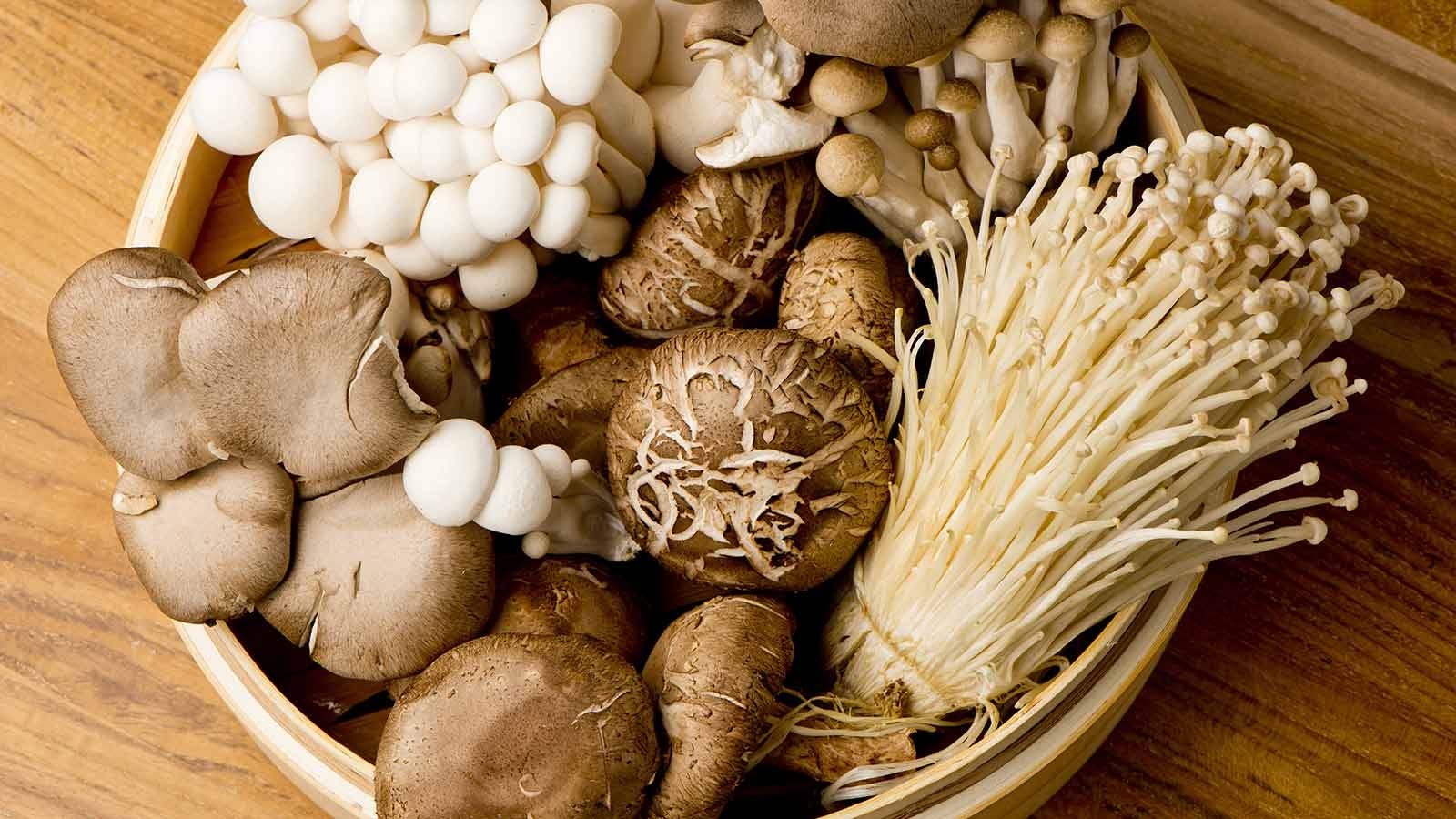 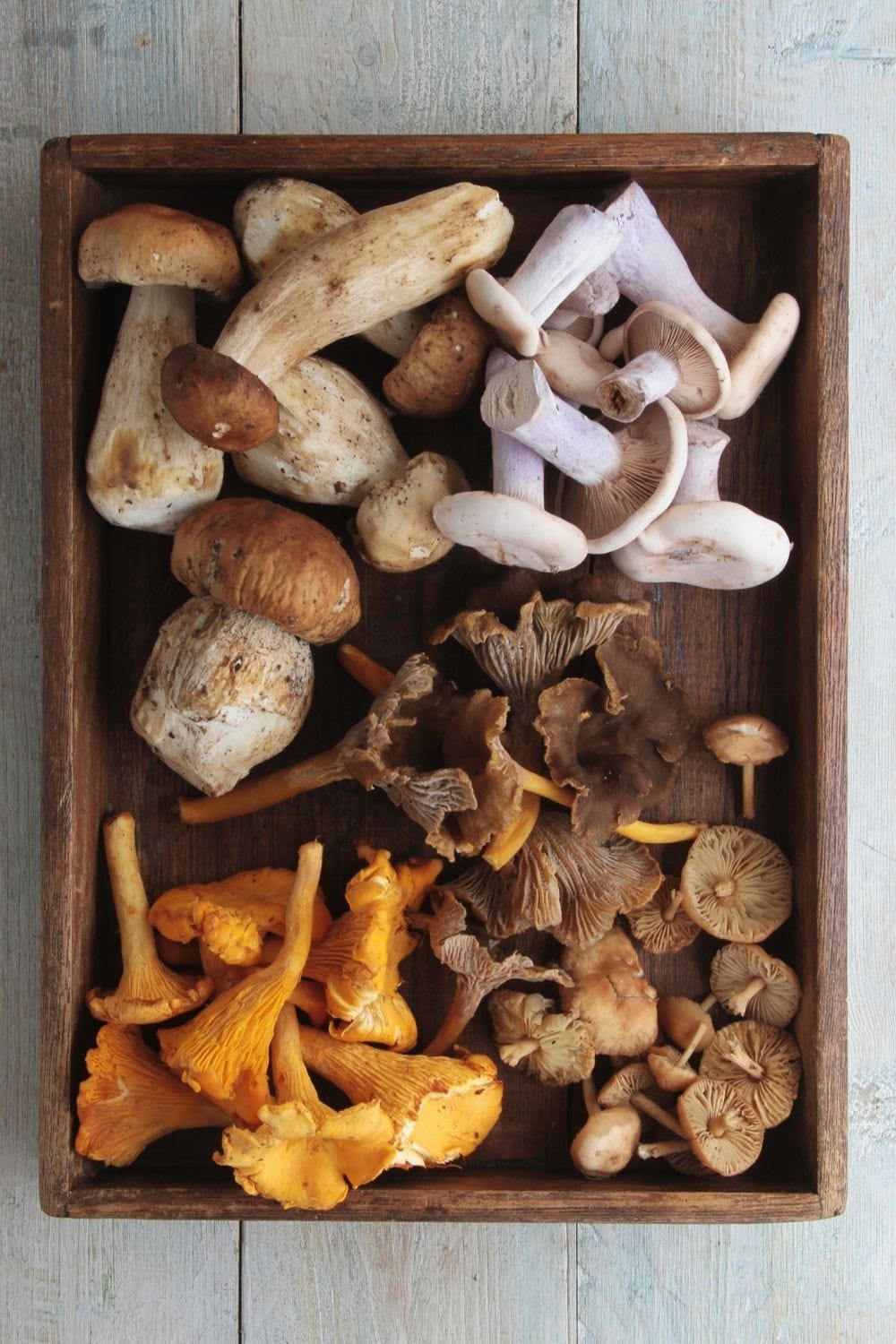