We’ve all heard about them, some of us have tried them, but few of us would be able to say much about them. What is a Tofurky, where did it come from, and, more importantly, how do we cook it?

Given current trends, if you aren’t a vegan or vegetarian yourself, it’s likely that you at least know someone who is. Before now, those who self-identified as herbivores were shunned from the finest of restaurants, relegated to poorly produced pasta, and left to their own soy-eating devices.

Today, though, the latest and greatest celebrity chefs are all about catering to meatless motivations. And let’s be real, the extra-dry, overdone, carcass your great Aunt Polly is passing off as turkey isn’t exactly drool-worthy. While the tofurkey isn’t new, we suspect it will make it’s way onto more Thanksgiving tables this year than it ever has in the past. So, we think it’s essential to dig into this herbivore friendly main dish.

Tofurky is a tempeh-based turkey replacement. It was popularized in 1995, by the Tofurky brand based out of Hood River, Oregon. It’s founder, Seth Tibbits, became a vegetarian in college during the late ’70s. Around that time, he became fascinated by tempeh as a sustainable soy-based protein source. After gaining some tempeh spores, he began to grow the moldy soybeans himself. And, he discovered, once fried, tempeh was pretty delicious.

By 1980, Seth was renting a commercial kitchen at nights to produce tempeh for sale. He had realized his dream was to bring a sustainable vegetarian protein source to Americans, but Americans weren’t really buying in. By 1992, it was clear that tempeh had a loyal following, but that he would need to be extra innovative for the public at large to embrace the consumption of moldy soybeans.

Seth had long pondered what to do for vegetarians on Thanksgiving, and after tasting a tempeh-based roast in 1994, he formed a plan. He flavored the tempeh roast with a Thanksgiving blend and molded it into drummettes. By 1995, Tofurky was on the market, and by 1996, it was one of the first foods to be sold online. In 2018, Tofurky sales reached five million. And, with 1% of Americans identifying as vegan or vegetarian, and an additional 8% identifying as flexitarians, we can only imagine that Tofurky isn’t going anywhere.

How to Cook a Tofurky

It turns out that cooking a Tofurky is easier than cooking the real deal turkey. It may not look appealing straight out the package, but then again, neither does a raw bird.

To start, you’ll need to thaw the roast under refrigeration overnight. Once ready to cook, many recipes recommend running the plastic-wrapped Tofurky under warm water to loosen the packaging before you try to remove it. Then, baste it as you would any roast with a mix of broth, oil, herbs, and spices. Place in a roast pan over your choice of diced fall vegetables. Sweet potatoes or carrots work well.

From there, cover and cook the Tofurky for an hour and 15 minutes at 350 degrees F. Then, baste it again, uncover it, and continue to roast for ten minutes more.

Now, here’s the critical part. To make it look like an actual turkey is on your table, you’ll need to carve the Tofurky appropriately. Don’t use a carving knife, but instead pull out a serrated bread knife. Carve thin slices, and you’ll find your roast looks and feels texturally more like a turkey than you thought possible.

Serve the carved Tofurky with the gravy provided or make your own mushroom gravy as an accompaniment. Leftovers can be stored in the fridge in an airtight container. And, just like the traditional roast, sliced Tofurky makes incredible sandwiches the next day.

While the tempeh-based roast comes ready-to-cook, many a vegetarian has come up with unique and delightful baste recipes for use on this holiday main. Some have even developed new ways to cook this meat alternative. Using a slow cooker frees up your oven for other side dishes and desserts. And, if you’re feeling really adventurous, we’ve included a tutorial on making a vegan tofurkey from scratch.

It took some time for Tofurky to make it out of its founder’s van and onto American tables across the country. But now, as meat alternatives are becoming mainstream, there’s no stopping this vegan-friendly holiday substitute.

We expect to see it more and more often, and really, we’re not sad about it. It’s easy to prepare, simple to flavor, and it probably taste’s better than great Aunt Polly’s overcooked bird. So, even if you are a red-blooded, meat-eating, American, give this tempeh-based entree a chance. We think you’ll be pleasantly surprised!

READ NEXT
Lauren Sakiyama Lauren Sakiyama is a freelance writer with over a decade of experience in the hospitality industry. She has managed restaurants, country clubs, and large-scale event operations, but her passion has always been about the food. Read Full Bio » 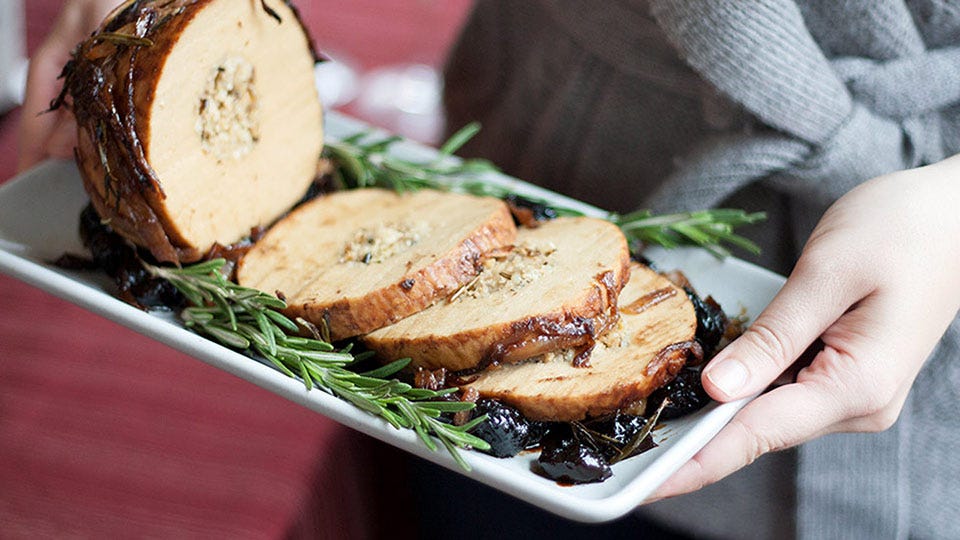