You turn to us for your tech advice, your product reviews, and your lifestyle questions. If you trust us with so many other elements of your life, you should probably take our word on the best Halloween movies, too, right?

The teams at LifeSavvy, How-To-Geek, and Review Geek are bringing you their favorite Halloween films. They run the gamut from an iconic villain origin story to a 1920s horror, and don’t worry if you’re not sold on the scary. Some of us chose films that give major fall vibes without all the spooky stuff.

If you’re on the hunt for your next cozy or edge-of-your-seat watch, these are LifeSavvy Media’s picks.

The Nightmare Before Christmas

Just in case you’re not familiar, the movie follows Jack Skellington, the pumpkin king of Halloween Town who is tired of his annual trips to the human world to scare kids. For poor Jack, Halloween has lost its magic. When he discovers Christmas Town, he hatches a plan to kidnap Santa Claus and take his place.

The Nightmare Before Christmas

Halloween or Christmas? You decide!

“The Nightmare Before Christmas is the perfect family holiday film. What other movie can you show to all but the youngest children at any point between September and December and it’s a perfectly appropriate time to watch it? It’s simultaneously a celebration of the spooky and macabre alongside the warmth and redemption of the Christmas spirit. Further, Jack Skellington taking on a new role, complete with a new costume, but ultimately returning to his life as King of Halloween Town is a perfect parallel to the way we all don Halloween costumes to become someone new before returning to our lives when the adventure is over.” — Jason Fitzpatrick

Joel Schumacher’s cult-classic film is a favorite of Amanda Gambill, LifeSavvy’s managing editor. The movie, which stars Kiefer Sutherland, Corey Haim, and Corey Feldman, follows brothers Michael and Sam who move to a small California town. While Sam finds new friends, Micheal falls for a girl named Star who just so happens to be in thrall to the leader of a vampire gang. Sam and his new friends set out to save his brother and Star from the dangerous vampires.

Two brothers must stop a gang of vampires in a northern California town.

“This has always been my favorite vampire movie because it has everything: an intriguing story, a mystery, a rockin’ soundtrack, comedy, camp, and just the right amount of gore. Plus, it stars Jack Bauer from “24” as a ruthless motorcycle-riding bloodsucker—that alone is worth the price of admission. I highly recommend watching it on a big screen, too, if there’s a Halloween showing in your town.” — Amanda Gambill

Not so into spooky? Andrew Heinzman, one of the talented writers at Review Geek, says to check out ’90s classic Ernest Scared Stupid.

If the Ernest films escape your memory, they all center around a lovable but dim-witted man named Ernest P. Worrell who certainly knows how to get himself into a pickle. The character, iconically portrayed by actor Jim Varney, was originally created for a series of ads and commercials by Varney and ad agency Carden & Cherry. However, the character and Varney’s comedic portrayal of him became so popular he ultimately had a series of films. Ernest Scared Stupid is one of them.

In the movie, Ernest is working as a garbage collector when he frees a troll that’s been locked up in a tree for 200 years. Upon his release, the troll begins turning children into wooden dolls. Ernest teams up with his superstitious neighbor Old Lady Hackmore (played by the legendary Eartha Kitt, by the way) to defend his town.

If you need a few laughs to balance out your horror film binge, this one is it.

“Ernest Scared Stupid is one of those ridiculous slapstick movies that a whole family can enjoy. And Eartha Kitt is in it. What more do you need?” — Andrew Heinzman

Cabin in the Woods

For How-To-Geek writer Vann Vicente, Cabin in the Woods is the perfect addition to your scary movie marathon.

The film—which notable stars Chris Hemsworth just after the first Thor film’s release and Jesse Williams pre-Grey’s Anatomy—follows a group of college friends who spend a weekend away at a secluded cabin only to be attacked by supernatural creatures. All, however, is not what it seems in this film, and it takes a wild turn.

Cabin in the Woods

Brace yourself for some wild twists and turns in this horror film.

“It’s scary, funny, and packed with satirical horror references that your entire friend group will have a blast decoding. It’s the perfect capper to a Halloween movie marathon!”— Vann Vicente

If you were too old or not old enough for Disney’s original movie heyday, you might have missed How-To Geek staff writer Joe Fedewa‘s favorite Halloweentown.

The film follows Marnie Cromwell, a 13-year-old girl, who discovers that her grandmother is a witch from a magical place called Halloweentown. There, supernatural creatures can live in peace year-round, but a force is threatening the town and the safety of its residents. Marnie, her siblings, and her grandmother team up to save the city.

Relive the hey day of Disney Channel original movies with this throwback.

“This is a very silly Disney Channel Original Movie that I first saw as a kid and I watch it every year. The premise is witches, vampires, and monsters are all real, but they live in a special realm called “Halloweentown.” The main character is part witch, but her mom has tried to hide it from her. She eventually finds out from her grandma, played by the amazing Debbie Reynolds, and they end up in Halloweentown trying to stop an evil threat. The effects and acting are super cheesy, but it’s very nostalgic to me.” — Joe Fedewa

The Cabinet of Dr. Caligari

Jordan Gloor, technical editor at How-To Geek, cites The Cabinet of Dr. Caligari as a must-see for the spooky season.

This 1921 silent horror film from Germany is considered a classic in German cinema and considered an inspiration for present-day directors like Tim Burton and subsequent horror films like 1931’s Dracula and Frankenstein.

The film tells the story of Francis and Alan who meet Dr. Caligari at a carnival. There, Caligari is showcasing his somnambulist (or sleepwaker) Cesare who he claims can see the future. Cesare, however, is actually hypnotized, and in his trance-like state predicts Alan’s death. The next morning, Cesare’s prediction has come true making him the prime suspect.

The Cabinet of Dr. Caligari

Celebrate Halloween with one of cinema's most famous horror films.

The film, adapted from the Alice Hoffman novel, tells the story of Sally and Gillian Owens, sisters whose family line is full of witches. After Gillian gets involved with the abusive Jimmy Angelo, he ends up dead, and the sisters come under investigation by a charming detective. However, as weird phenomena begin occurring, the sisters begin to wonder if Jimmy Angelo is really gone.

A haunting, a murder-mystery, and a romance? Yes, please.

“You can’t out spooky a 90s Halloween movie like Practical Magic, especially with a cast like Sandra Bullock and Nicole Kidman. This film really has it all—fantasy, romance, comedy, and most importantly, the bonds of sisterhood.” — Sarah Jordan

If you’ve been waiting for a zombie film to pop up on this list, you can send your thanks to How-to Geek writer Tim Brookes. Cillian Murphy-helmed film 28 Days Later is his pick.

The movie begins with a bike messenger named Jim waking in an abandoned hospital in London 28 days after a deadly virus has turned much of the population into blood-thirsty zombies. As he makes his way from the hospital, Jim meets other survivors and attempts to get to a military-run sanctuary.

Love zombie movies? This is the Halloween watch for you.

“Harrowing, tense, and brilliantly acted with the best soundtrack ever featured in a zombie movie.” — Tim Brookes

Looking for a classic? Cam Summerson, Review Geek’s editor-in-chief, points to the original, 1974 iteration of The Texas Chainsaw Massacre.

The film follows Sally and her paraplegic brother Franklin who head to their family’s old farmhouse to investigate word that their grandfather’s grave has been vandalized. While there, the group discovers murderous neighbors and one by one begin getting attacked by the now infamous Leatherface who wields a chainsaw and wears a mask of human skin.

Think a movie from the '70s can't be scary anymore? Think again.

“Some people say it’s one of the scariest films ever made. I say it’s the most brilliant horror movie ever created. If you’re new to the Texas Chainsaw franchise, you have to start with the original. The 1974 Chainsaw is the heartbeat of what horror should be—no jump scares, no cheap thrills. Just pure tension and raw fear at every turn. If you have seen the original, you should watch it again to remind yourself of how great it really is. There are also plenty of sequels, prequels, and reboots to dig into, but none will ever outshine Tobe Hooper’s original masterpiece.” — Cam Summerson

As for me, I can’t get through the month of October without watching Hocus Pocus. The iconic Disney film starring Kathy Najimy, Bette Midler, and Sarah Jessica Parker inspires costumes and merchandise to this day.

The film follows Max Denison and his little sister Dani who have recently moved to Salem, Massachusetts. During Halloween, Max, Dani, and their new friend Allison explore an abandoned cabin. Despite Allison’s warnings about the home, though, Max sets the Sanderson sisters, a trio of witches intent on becoming immortal, free. To keep his little sister and new town safe, Max must stop the sisters before it’s too late.

Spooky meets campy? This one definitely belongs on a movie marathon list.

“There’s a reason you see Hocus Pocus pop up in your social media feeds every Halloween. It’s a classic. With an all-star cast, the film is comedy gold that’s able to blend elements of camp with some truly spooky moments. In fact, after watching it as a kid, the Sanderson sisters scared me so much I couldn’t re-watching it until my 20s. Now that I’m older, though, those spooky sisters are some of my favorite characters, and Najimy, Parker, and Midler’s performances are must-sees.” — Shea Simmons

If you’re on the hunt for a few movies for your October weekends or Halloween night movie marathon, these are some of our favorites. Like us, no two movies are the same and all are *chef’s kiss.*

Now, it’s just time for you to get to watching. 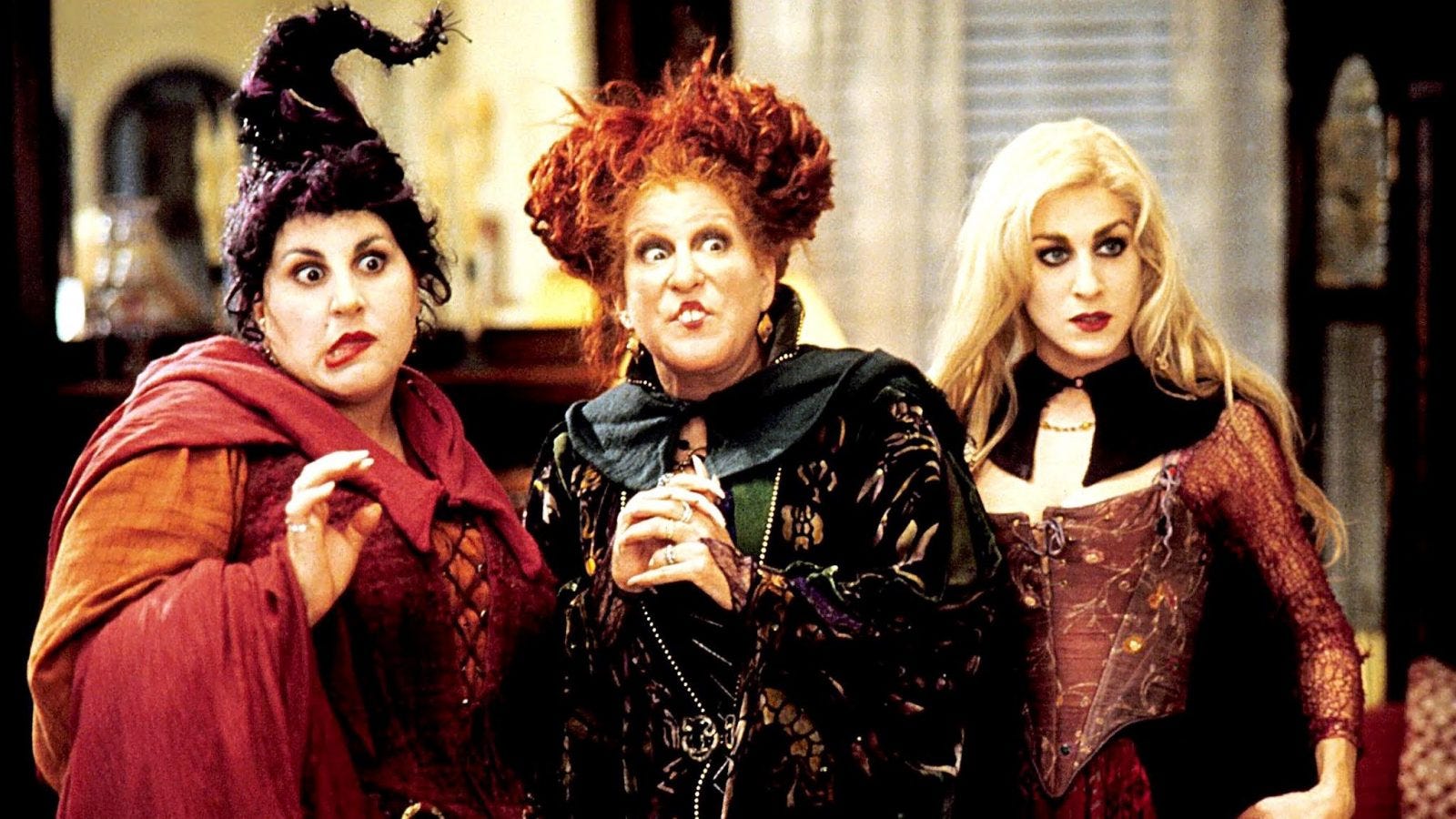 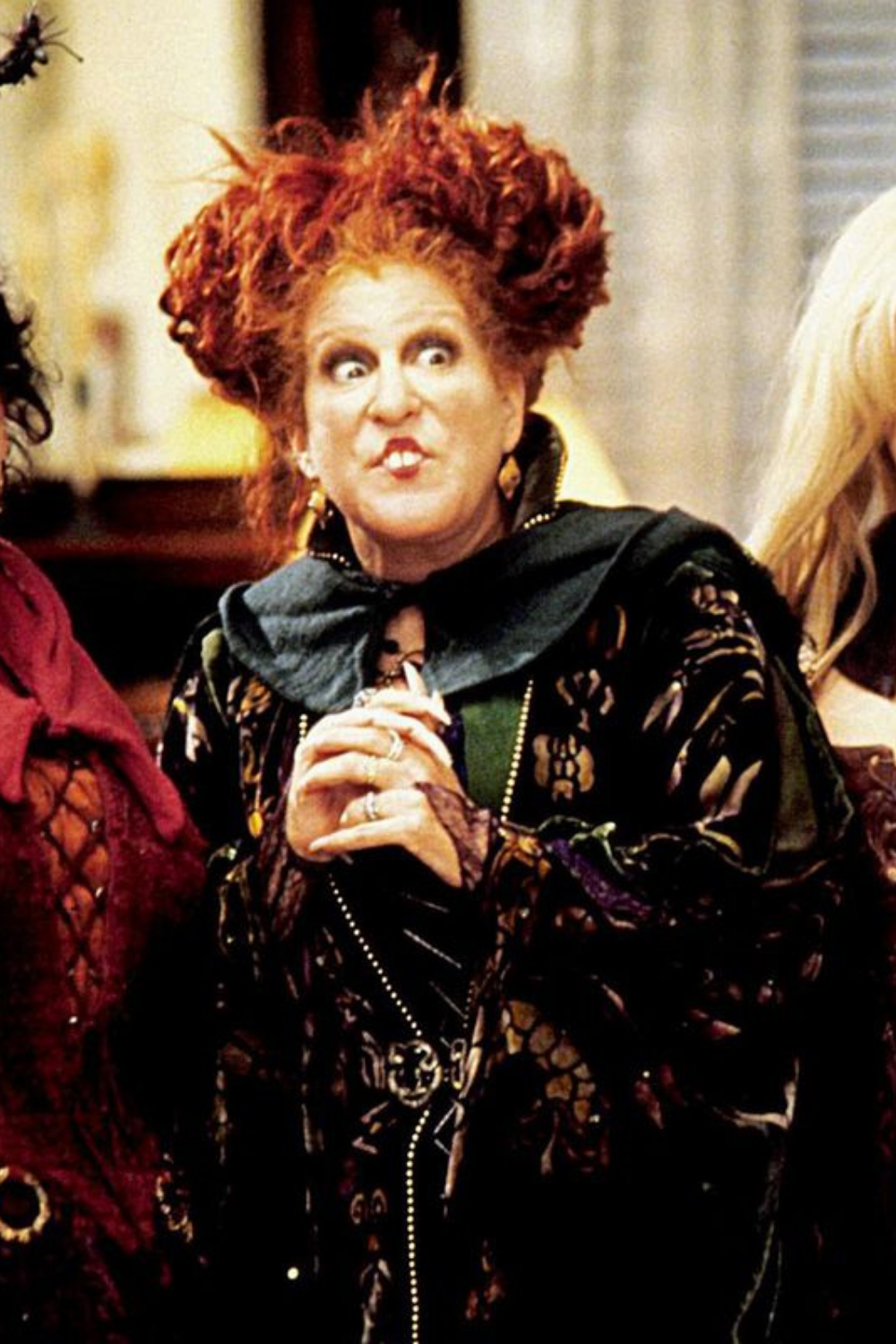