Shopping for a fan of The Office? These gifts range from the subtle to the silly—and you’re sure to find the perfect thing for your superfan.

Debuting in 2005, The Office quickly became one of the most popular TV shows of all time. Based on an original British show with the same name, the American version took its own direction by the end of the first season and became a household hit. Although the final season aired in 2013, millions of fans around the world still watch this show regularly.

From Michael Scott’s inappropriate sense of humor to Dwight Schrute’s eagerness to please to Jim Halpert’s pranks, every fan of The Office has connected with at least one character. Here are the best gifts for the fans in your life.

In the season four episode “Money,” Jim and Pam spend the night at Schrute Farms, which is a bed and breakfast that Dwight runs on his beet farm. The night is full of manure, Harry Potter, and outhouses and creates one of the most memorable episodes in the entire series.

This baseball hat lets your gift recipient represent the greatest agritourism destination in Pennsylvania. The dad hat style is a classic fit and the adjustable strap makes it appropriate for all head sizes. The hat comes in five different colors and will complement any casual outfit.

If you can't visit Schrute Farms, this hat is the next best option. 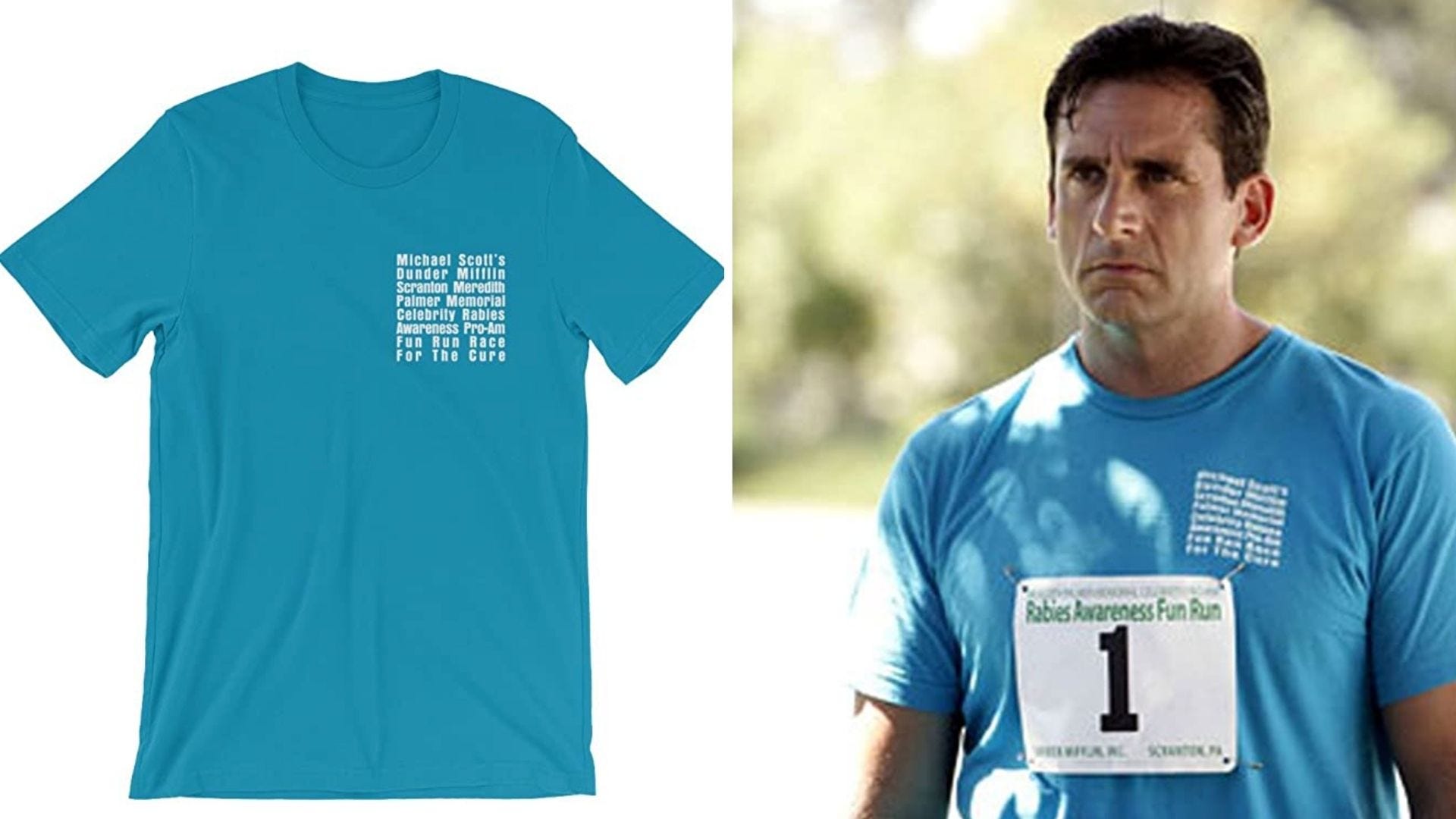 Every fan of The Office loves the “Fun Run” episode. From Jim hiring a stripper to accept a donation check to Michael loading up with fettuccine Alfredo minutes before the race, this 2-part episode is full of laugh-out-loud moments.

All of the characters in this episode don these custom race t-shirts with Michael’s chosen name for the event—“Michael Scott’s Dunder-Mifflin Scranton Meredith Palmer Memorial Celebrity Rabies Awareness Fun Run Race For The Cure.” The simple design is a fun reference to the show that’s subtle enough for anyone to wear. This shirt is perfect for costume parties or for everyday wear when it comes to the most devoted fan in your life.

Support the Dunder Mifflin Rabies Fun Run with this shirt.

One of the most iconic props in the entire show is Michael’s “World’s Best Boss” mug. He displays it proudly and although he purchased it himself, he believes that mug says it all about his experience as an employer. Everyone could use another mug in their life and this is a great pick for any fan of the show.

Let your friend pretend to be Michael Scott with this “World’s Best Boss” mug. They can use it as a mood-booster in the morning or display it on their desk at work. It’s also dishwasher and microwave safe, making it easy to take care of.

Boss or not, this mug is a great addition to any kitchen.

Threat Level Midnight, Michael’s very own movie, is one of the greatest things to come from The Office. It took three years of writing, one year of shooting, four years of re-shooting, and two years of editing to create, and every second was worth it.

Watching a bunch of good actors pretend to be bad actors in a short film full of explosives and horrible transitions is hilarious. And one of the greatest action films of all time deserves its own merch.

This Threat Level Midnight t-shirt is perfect for anyone who can’t stop singing the credits song or doing the “Michael Scarn” dance at home. It comes in men’s, women’s, and youth sizes so it is appropriate for anyone on your list.

Fans of the action packed film Threat Level Midnight will love this shirt.

After the show left Netflix last year, many fans are looking for other ways to enjoy their favorite series. This DVD set lets any fan on your gift list have access at home.

Although DVDs are becoming less convenient than digital copies, this set comes with more than just the standard episodes. In addition to all 201 episodes spanning nine seasons, this box set includes bonus commentaries, webisodes, and blooper reels. It even has over 15 hours of deleted scenes that they’re probably never seen before. It’s a gift every fan of The Office will want in their home.

Watch every episode of the show with these DVD set.

The Dundies are the awards show that Michael puts on for his employees every year. They usually involve cringe-worthy singing, bad jokes, and at least one inappropriate comment. As Pam put it, “You know what they say about a car wreck, where it’s so awful you can’t look away? The Dundees are like a car wreck that you want to look away from but you have to stare at it because your boss is making you.”

That all being said, every fan of The Office would kill for a Dundie award. Make your friend’s dream come true with their very own. They can show it off to their friends, brag about it online, or keep it displayed in their living room next to their plasma screen TV.

Give your friend a prestigious award they will cherish forever.

This poster is guaranteed to make every fan of The Office laugh out loud. Although it’s only shown in the series for a few seconds, it’s arguably one of the funniest and most clever parts of the show.

This simple black and white poster features Michael’s (or Wayne Gretzky’s?) motivational quote “You miss 100% of the shots you don’t take.” It’s printed on museum-grade Fuji Crystal archive paper that will last for decades. It can be hung on its own or put in a frame for safekeeping. This poster will look great inside of any home or bedroom.

This poster features wise words from a questionable source.

Fans of The Office will love this bobblehead almost as much as Dwight did in the show. It was originally given to Dwight by Angela Martin and made several appearances throughout the rest of the show.

This bobblehead is an exact replica of the one used in the show. It comes on a quality stand to keep it stable and measures just over five inches tall. It can fit everywhere from an office desk to a bookshelf to a car’s dashboard. Whenever your recipient needs a mood booster, they can just tap Dwight’s head and watch him nod in support.

This fun bobblehead is a great addition to any desk.

Somehow I Manage is Michael’s memoir that is mentioned a few times throughout the show. Michael ends up giving the unfinished version to Darryl before his character exits the show and unfortunately, fans never got to see the final copy. Until now.

Well, not really. This notebook is just that: a plain notebook. However, it does feature one interpretation of what would have been the cover of Michael’s memoir if the real thing had ever been published. The blank ruled pages can be useful as well, since your recipient can use this gift for everything from journaling to taking notes at school to writing down grocery lists. It’s still a really fun gift however they use it.

Somehow I Manage: A Notebook for all Managers and fans of the Office

This notebook has a fun cover and is useful for anyone.

This small adhesive sign is the perfect nod to the show for anyone who likes to represent popular media in a more subtle way. This door sign is featured in the intro of every episode of The Office, making it a subtle but respectable nod to the show.

The nine-inch by three-inch acrylic plate contains a self-adhesive backing that can be used anywhere. Your gift recipient can put this sign on their office door, bedroom door, desk, wall, or pretty much anywhere else the adhesive will stick to. Some reviews say that the adhesive isn’t very strong, so you can use the adhesive of your choice if you’re having trouble getting it to stick to your door.

This sign is a subtle nod to the show and can be put anywhere.

Funko Pops are small figurines that represent characters from pop culture. They feature everything from Harry Potter to Game of Thrones to Marvel, and The Office is no exception.

This Dwight Schrute Funko Pop is the perfect present for someone who quotes Dwight on a daily basis. It’s also ideal for someone who collects these figurines and needs to add to their collection. These can be displayed anywhere and at about four inches tall they won’t take up too much room.

This Michael Scott Funko Pop figurine is similar to its Dwight counterpart above except, of course, that it features Michael instead. In this depiction, Michael is standing in his signature blue suit and is holding his “World’s Best Boss” mug in one hand.

Again, this item is great for fans of the show who are building a collection of The Office Funko Pops. The small figurines can be kept virtually anywhere and will stand on their own without the need for a special base.

Michael Scott can have a place anywhere with this figurine.

The Office is one of the most popular comedies of all time. These gifts are perfect for the fans in your life, whether they could use a new coffee mug, want to add more t-shirts to their closet, or have always dreamt of receiving a Dundie award. 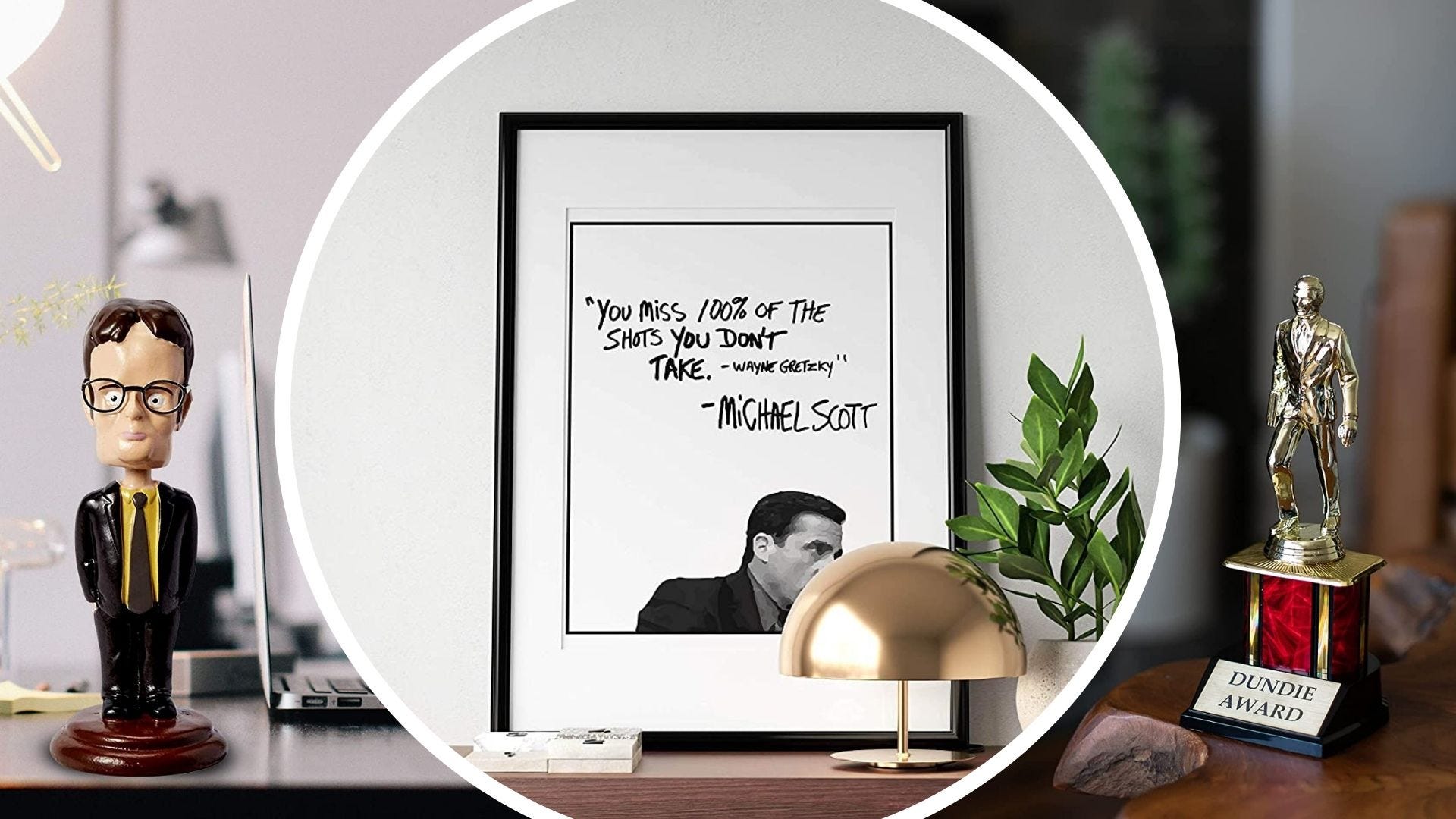 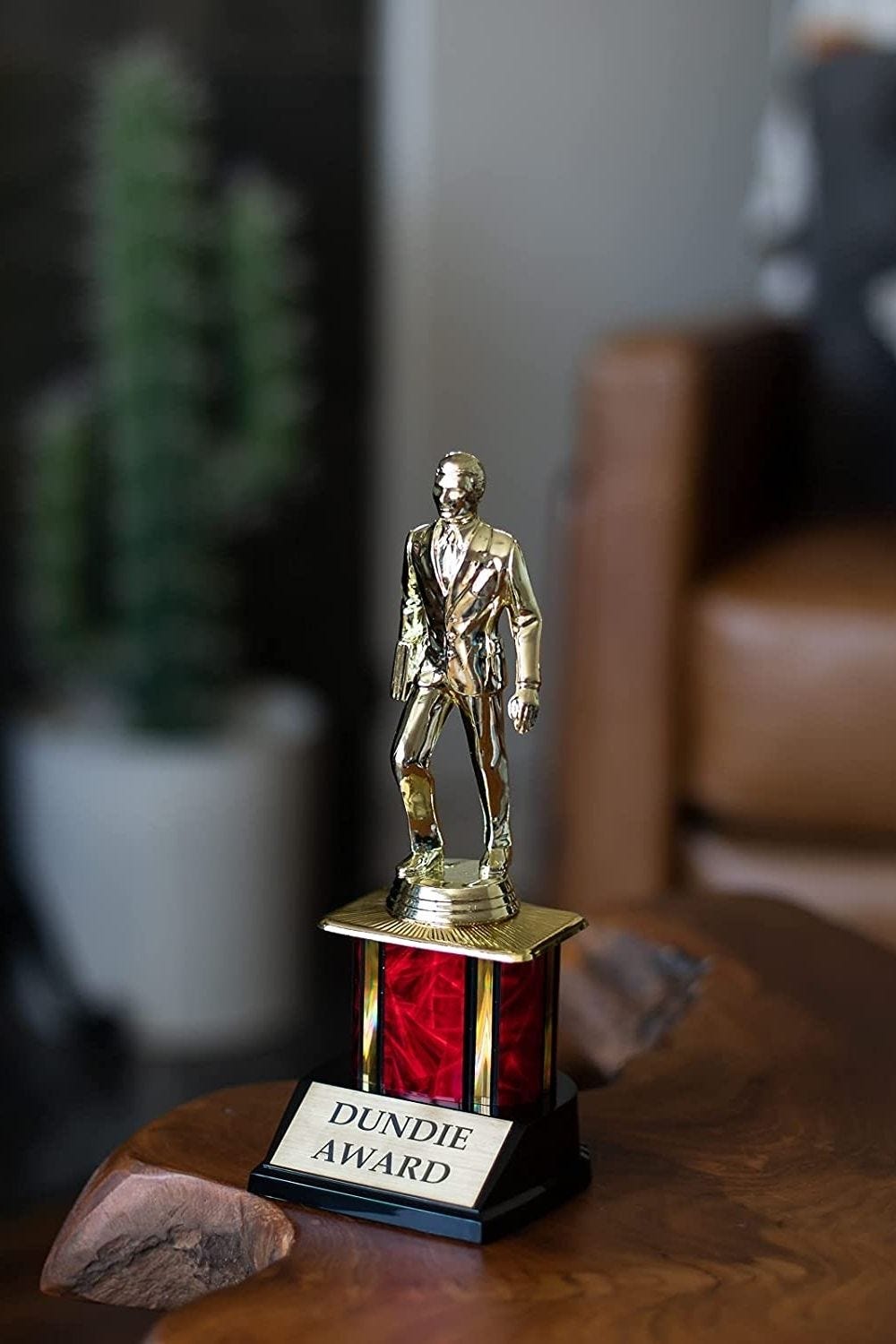