Take These Mini Arcade Games with You on the Go

As much fun as full-sized arcade games can be, not everyone has the option to buy and keep one of these machines in their home. That's where a miniature, handheld arcade game comes in handy.

Take These Mini Arcade Games with You on the Go

Mini arcade game machines allow you to play and enjoy the same games in a much more compact manner. Essentially, they’re more old-school versions of handheld modern gaming devices such as the Nintendo Switch or DS.

Why buy a mini arcade game?

Mini arcade games are great for anyone who wants to enjoy a classic, retro arcade game in the comfort of their own home, but who doesn’t have the space or money (or both) for a full-sized machine. While a mini arcade game won’t offer as big of a screen to play on, its small size makes it much easier to store, even in a small apartment, condo, or dorm room. Mini arcade games are also portable enough to bring with you on the go, whether you use them to get through a long subway commute, or your child wants to take them over to a friend’s house. There are even models small enough to attach to a keychain. And both handheld and keychain arcade games are far less expensive than full-sized or tabletop arcade game machines, or even comparable modern handheld gaming systems.

Basically, if you’re a fan of taking video games on the go, you’ll love mini arcade games, especially if you’re on a budget.

What should you look for in a mini arcade game?

Here are a few things to consider before buying a mini arcade game:

What are the drawbacks of owning a mini arcade game?

The main disadvantage of a mini arcade game is that it has a much smaller screen size and buttons than a full-sized or even tabletop option. Kids might not consider this a problem, particularly if they’re used to playing games on their phones or on a system like a Nintendo DS. Adults, especially those with larger hands or poor eyesight, might struggle in this area, though. Another drawback is that two people can’t play a mini arcade game at once. If you’re buying a mini arcade game for your kids, they’re either going to have to share the game, or you’ll want to buy one for each of them.

Our Picks for the Best Mini Arcade Game Machines

With over 200 different games built-in, this handheld arcade game machine provides a game to suit every taste and preference.

Pros: Not only does this mini arcade game boast an impressive 220 built-in games, but there’s plenty of variety within the games themselves. It contains retro games, modern games, puzzle games, adventure games, sporting games, and more to help stave off boredom for longer. It’s also suitable for ages 5 and up, as some of the education and memory games were made with younger children in mind. And the screen, gradient, and lighting are designed to provide as clear of an image as possible on the small screen while protecting the user’s eyes.

Cons: This model isn’t compatible with rechargeable batteries, only regular AAA batteries. This means that you’ll have to consistently buy new batteries to keep playing on this device. No batteries come included with your purchase, either. And it requires a screwdriver (which does come included) to open the slot to replace the batteries when they die. Thus, younger children will require your assistance rather than being able to change the batteries on their own.

Bottom Line: The number of games offered by this handheld arcade machine is almost unparalleled among mini arcade games. Thanks to this variety, children as young as 5 years old can enjoy this mini arcade game. Coupled with a 3-4 hour battery life, its features make this device a nice option for keeping your child (or even adult passengers) entertained on road trips and long plane rides without having to worry about eye strain or damage.

You'll feel like you're playing Frogger as a kid again thanks to the classic look, feel, and sound effects of this handheld arcade game.

Pros: This mini arcade game puts the retro video game Frogger quite literally into the palm of your hand. This little device is fully equipped with all of the same graphics and sounds as Frogger‘s debut back in the ’80s. It even has the same miniature joystick for classic gameplay. The screen is backlit for brighter, clearer gameplay, and the power and volume control buttons are straightforward to manage and access. And it comes with a low price tag, even by handheld arcade game standards.

Cons: Unlike some other models, this mini arcade game is only equipped with Frogger. While this is great for fans of the original game or for anyone who wants to introduce their own children to it, this also considerably limits the device’s variety and versatility. If the user becomes bored playing Frogger, they won’t have the opportunity to switch to a different game.

Bottom Line: If Frogger was one of your favorite video games as a kid, then you’ll love this affordable mini arcade game despite its limitations on variety. The retro ’80s gameplay is sure to delight both fans of the original game and younger generations alike.

A mini arcade game designed to look and feel as authentic as possible, no matter which of the seven different classic games you purchase.

Pros: This mini arcade game is about as authentic as possible, from the graphics to the joystick and controls to the classic artwork decorating the sides. The little joystick is removable if you prefer to use the buttons for gameplay instead. You can buy this device in one of seven different possible retro games, so the odds are good that your favorite childhood game will be available for purchase. This little game has a jack for headphones and the option to be plugged in via USB as opposed to being battery-operated.

Cons: If you choose to play this arcade game on battery power, keep in mind that it requires more batteries than the average mini arcade game, so you’ll go through them faster and have to buy new ones that much sooner. There’s also only one game available per machine, so if you buy the Pac-Man model but decide that you want to play Galaga, you’ll have to buy the Galaga machine separately. And although the price varies some by game, most versions are priced a bit higher than many other mini arcade games.

Bottom Line: This mini arcade game machine allows you to pick your favorite retro arcade game to play at home or while out and about. Although the variety of games is limited to one game per machine, the classic look and feel and the customizable controls help make up the difference.

Small enough to slip into your pocket, this keychain-sized mini arcade game offers surprisingly good graphics for its size.

Pros: Even though the graphics aren’t as clear as those on a 75-inch flatscreen TV, they’re much better than you’d expect, considering the device’s diminutive size. It has all the same buttons and controls as a handheld or full-sized arcade machine and is extremely portable. The 11 different purchasing options give you the choice of 11 different games to pick from.

Cons: Only one game is installed per device, so if you want a keychain version of both Space Invaders and Tetris, you’ll have to buy them separately. While the small size is convenient for portability, some people might struggle with how tiny the controls are. The gameplay and levels are somewhat limited compared to handheld models.

Bottom Line: If you prefer a keychain-sized mini arcade game to a handheld one, this is the device for you. Both the keychain and instructions come included, so you can slide it right on with your house or car keys without issue, and it makes for a cool little collectible at a fairly low price.

With an upgraded screen and over 100 games available in one device, this mini arcade game is sure to provide hours and hours of fun.

Pros: This little arcade game machine is equipped with 156 different classic ’90s games in one device, so it has plenty of gaming diversity. If you or your child gets bored with one game, there’s plenty of other options available. You can run it with regular AA batteries or a rechargeable battery and its USB port, both of which come included with your purchase. As a bonus, not only does this mini arcade game feature a headphone jack, but an AUX interface as well. This means that you can use the included AV cable to plug it into the TV if you ever want to play on a bigger screen.

Cons: While still less expensive than a full-sized arcade game machine or gaming system, this mini arcade game has a higher price tag than most. As handy as the included rechargeable battery is, it doesn’t offer the greatest battery life. It takes about an hour to fully charge, but only runs for about two hours before it needs to be charged again. As a result, this game machine isn’t a good option for long road trips.

Bottom Line: As long as you don’t mind the slightly higher price tag, you can’t really go wrong with this mini arcade game. Even though it costs a bit more than many other models, you can at least rest assured knowing that you’re getting a pretty good bang for your buck, considering how many built-in games there are. Plus, the AUX connection adds some extra value, as most mini arcade models don’t possess that particular feature.

Mini arcade games are the perfect combination of nostalgia and modern technological convenience. They allow you to play your favorite classic childhood games on a handheld or keychain device that you can bring along pretty much anywhere. Enjoy retro games like Pac-Man, Street Fighter, Galaga, and more wherever you go and without breaking the bank. 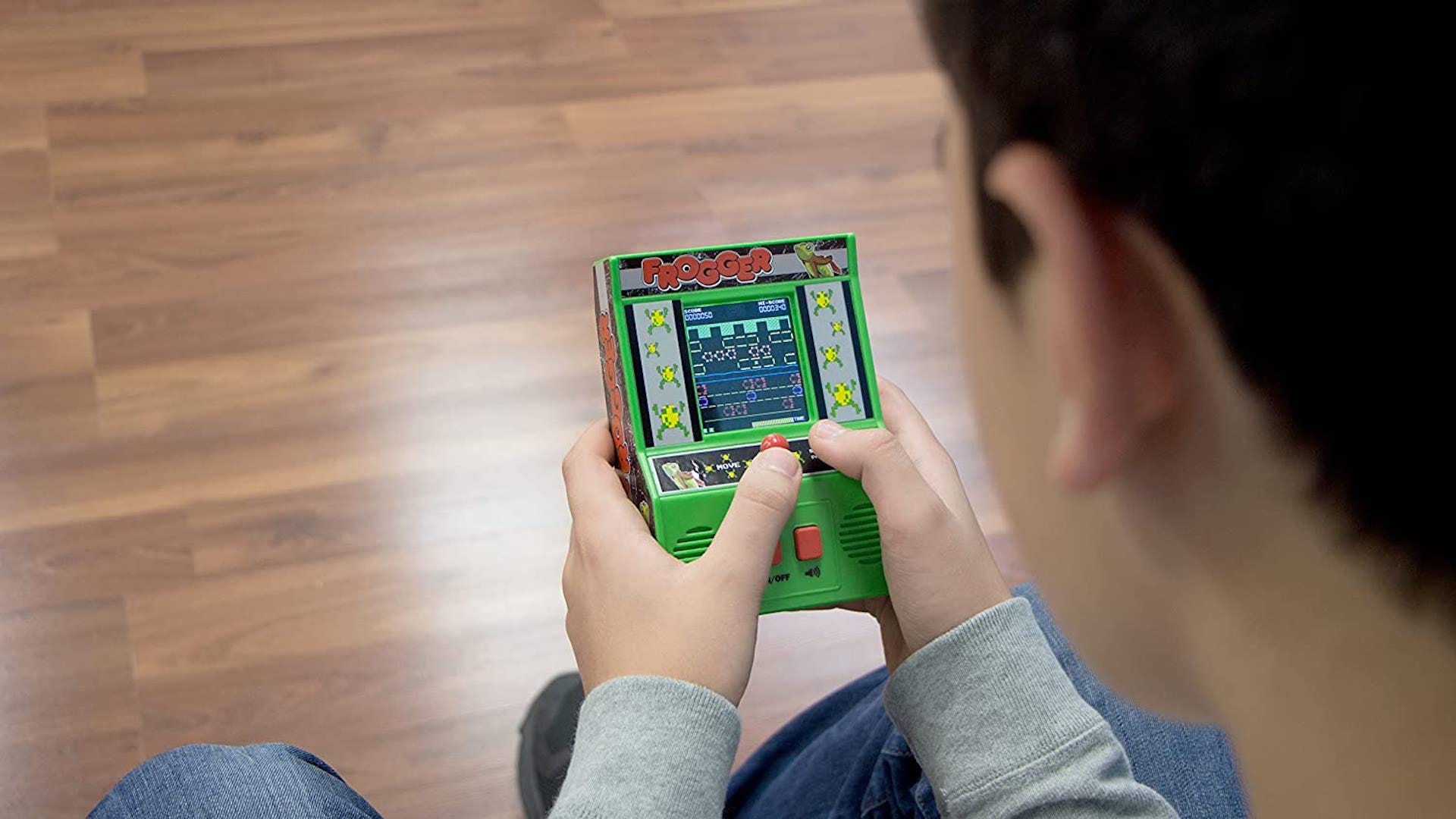 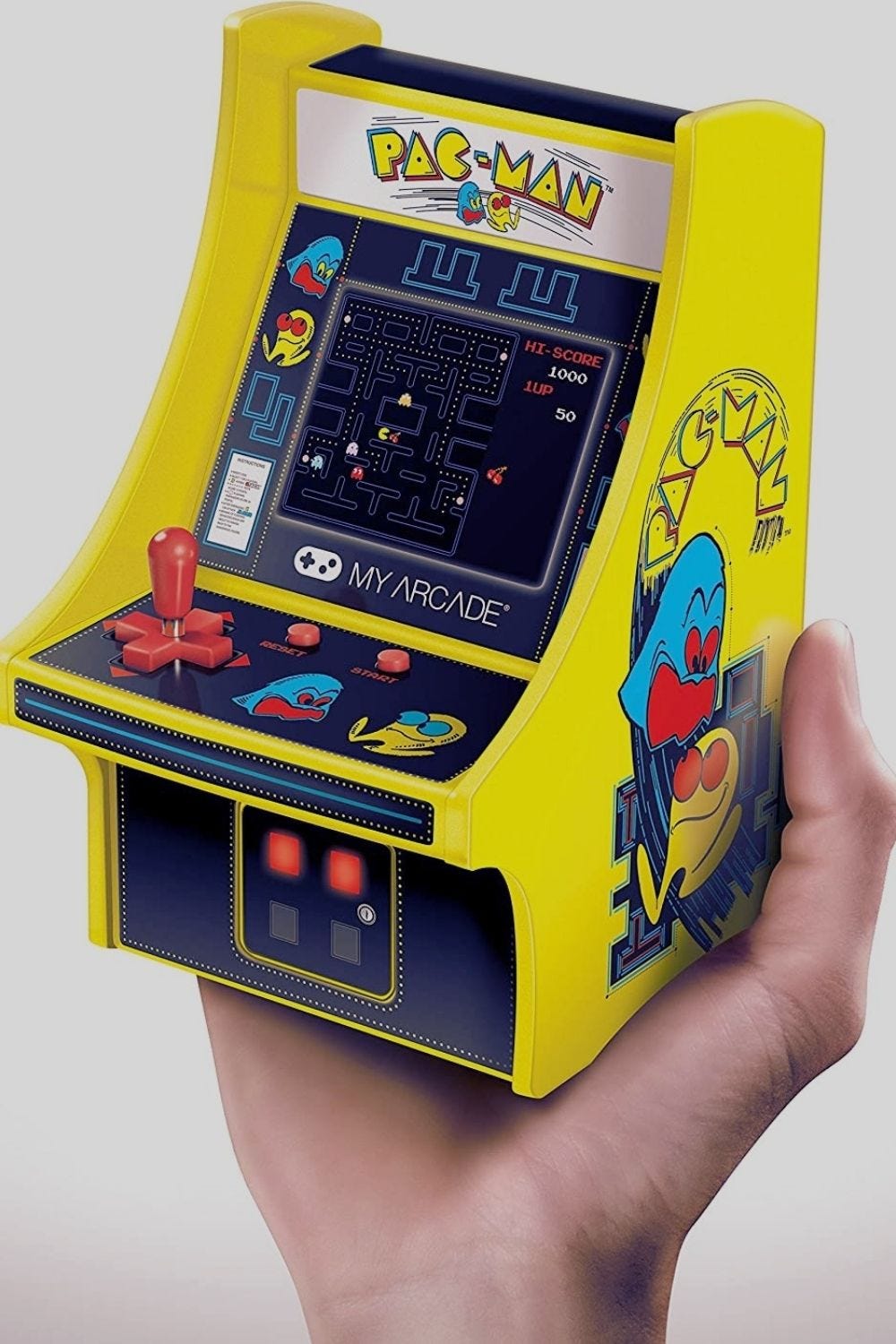