Flying remote-controlled airplanes is a hobby that is fun and exciting yet relaxing; it’s one that is fun for people of all ages. If you have a child or children at home, a day at the park or beach or other approved area spent flying and doing tricks with a remote-controlled airplane together can be a fun way to bond together and maybe even foster a lifelong mutual hobby. Many people have fond childhood memories of flying RC planes with their parent or parents and still fly them together when they get a chance. If you’ve always wanted to fly a remote-controlled plane but never have done so before, it may seem like a slightly intimidating hobby that involves a lot of buttons and levers and mechanics. You may not know where to get started or worry about picking too complicated an airplane to start out with. Fortunately, there are plenty of remote-controlled planes out there that are specifically designed for beginners and marked as such. You can start with one of these simpler models and work your way up to planes with more commands and stunt capabilities. Here are some options we recommend.

What to Consider in a Remote-Controlled Airplane

Here’s what to look into:

The perfect, newly upgraded RC plane for lifelong and other experienced pilots, whether a full-grown adult or an experienced kid or teenager. It has three channels (propeller, elevator, and rudder) and three speeds and stunt levels, easy, medium, and hard, so you can sit back and enjoy a more leisurely flight or up the ante for a more challenging one. The 2.4-GHz radio can control the plane at a distance of more than 320 feet away, and the core-less motor gives you a flying time of up to 12 to 16 minutes on one charge. The gearbox power system gives the plane more thrust and power, making the motor more power-efficient. The newly upgraded propeller saver technology helps prevent crashes, damage to the front propeller, and overcurrents or overheats of the electronic components. Both the plane and the wingspan measure in at 14 inches, and it comes assembled and ready to fly. Two batteries for the airplane and three spare propellers come included, though the AA batteries for the radio are sold separately.

An advanced remote-controlled airplane with three settings and channels and a newly designed propeller protector.

Some RC planes can run pricey, which is frustrating if you’re a fan of flying them, but you’re on a budget. Fortunately, this model proves that you can find a reasonably priced option that still offers quality, high performance, and fun. Not only will you receive the plane itself, but also replacement propellers, landing gear, and three batteries to supply the plane with a longer flight time. The airplane itself is made of light and very flexible EPP foam material, which is highly resistant to impact and makes it a breeze to fly. The high wing trainer adds to the ease of the flight as well as offering increased stability. It doesn’t have any confusing, extra moving parts, just the twin motors that control its direction. The plane has two channels and can fly almost 300 feet from the 2.4-GHz radio. It charges in about 30 minutes and has a flight time of about 15 to 20 minutes per charge.

An affordable remote-controlled airplane that is nonetheless easy to fly, resistant to impact, and offers a range of almost 300 feet.

If you want to start flying a remote-controlled plane as a hobby but aren’t sure where to begin, this made-for-beginners model is a great starting point. It comes fully assembled with all the items you need for flying (save the batteries for the transmitter, which are sold separately), so you don’t have to worry about putting the plane together yourself. It couldn’t be simpler to control, as the airplane is controlled by a one-key function on the radio transmitter. Just press one button and pull the stick. There are also three levels of flight control assists; beginner level with full assist, intermediate with partial assist, and expert with full manual control. You can start at the beginner level and learn to fly step-by-step, then move on to the next level when you feel ready. This model has a radio control distance of an impressive 656 feet, with a strong anti-interference capability to give you a great flying range. The gearbox system gives the plane more thrust and power for greater speed and increases battery efficiency. This model can fly about 20 minutes at a time and is designed to be stable even in windy conditions. An instruction manual is included to help you get started and make sure everything is in order before you begin flying.

A remote-controlled airplane designed with new flyers in mind, equipped with three modes that help you learn to fly step-by-step.

Many people who fly remote-controlled airplanes enjoy performing stunts and tricks with their planes, though not all RC planes are created equal in this regard. With its 20-inch wingspan, 14-inch body, and coreless motor, this model was designed for stunt flying. At the push of one button, you can easily have it perform stunts like flying it in upside-down loops and in spirals. The plane is made of EPP foam and is equipped with new propeller saver technology that helps to keep the propeller from getting damaged by mistake. This plane has four channels, a working throttle, rudder, elevator, and aileron, plus a steerable tail wheel that gives you better ground control. It also has three levels of speed control, easy, medium, and hard. It has a flight time of about 14 to 16 minutes and a flying range of 300 feet. The plane returns home at the touch of one button, so you don’t have to worry about ever losing control. Besides the airplane itself and the radio transmitter, you’ll receive a battery and three spare propellers with your purchase.

An advanced, four-channel RC airplane that is equipped for stunt flying. 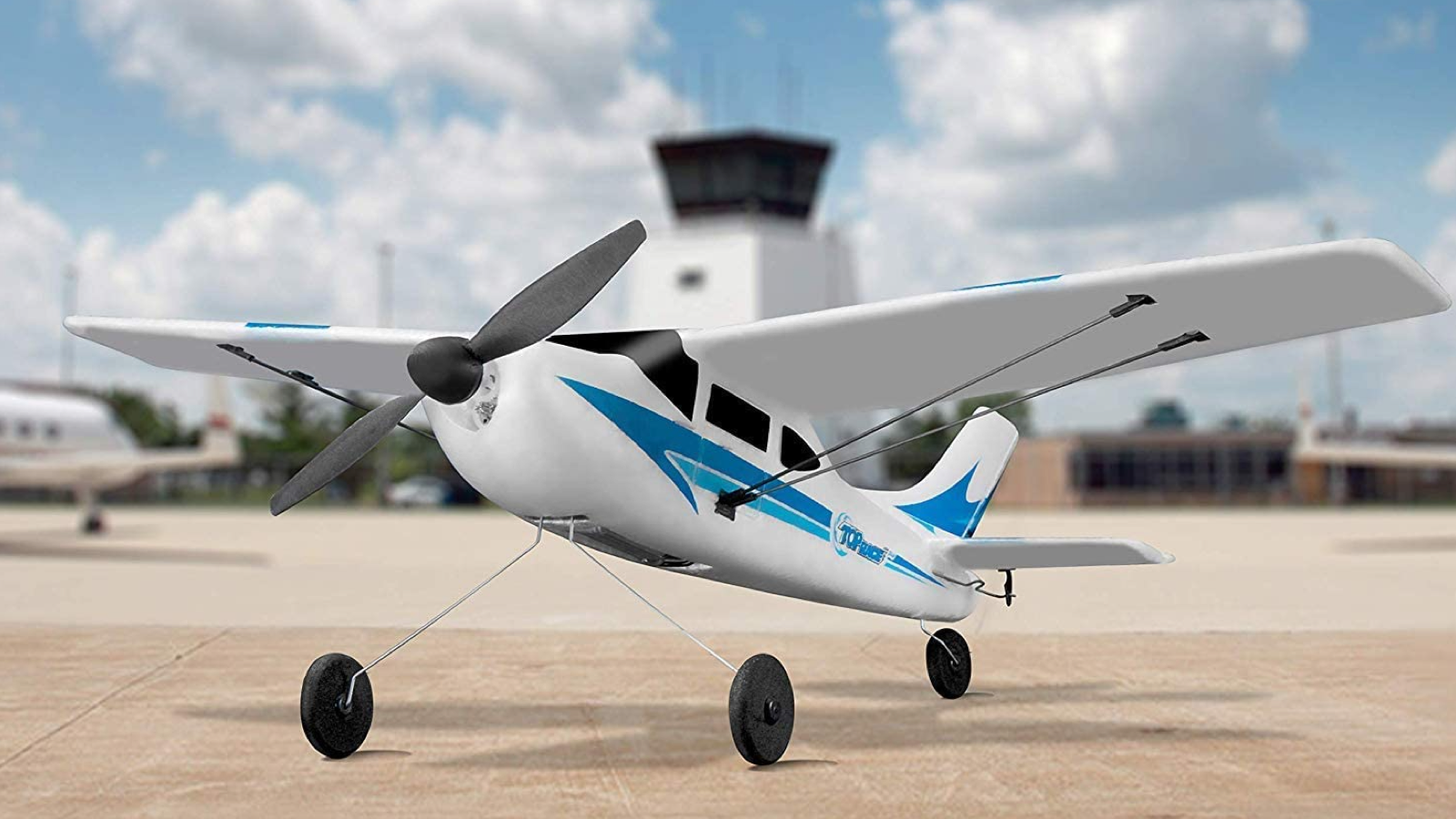