While cupcakes have been a well-known and well-liked dessert for quite some time, they’ve recently become an even more popular and trendy choice for weddings and other similar events. Cupcakes can offer a wider variety of options than a regular sheet cake, both in terms of decoration and flavor. You can buy or make cupcakes in several different flavors with different colored frosting or decorations for the same event. You can have a handful of cupcakes that are, for example, gluten-free, for guests with allergies or dietary restrictions, instead of needing the entire cake to be gluten-free. Many people also enjoy cupcakes as they satisfy a craving for sweets, cake, or frosting in smaller portions. They’re also easy to make and buy. However, many people encounter one common problem when they buy a large number of cupcakes for a special event. Cupcakes, unless they’re served completely plain, can’t be stacked on top of each other without squishing and ruining the frosting and decorations on top. Cupcakes stands were created specifically to rectify this problem. Also known as cupcake trees or cupcake towers, these handy decorative items are a convenient and stylish way to display dozens of cupcakes at a time without ruining them. Cupcake stands come in many different sizes, styles, and aesthetics depending on your needs and the event in question. Not only are they quite affordable, but they can also be reused over and over again for other foods like cookies and pastries as well as cupcakes. Here are a few cupcake stands we recommend.

What to Consider in Cupcake Stands

Here are a few things to think about before buying a cupcake stand: 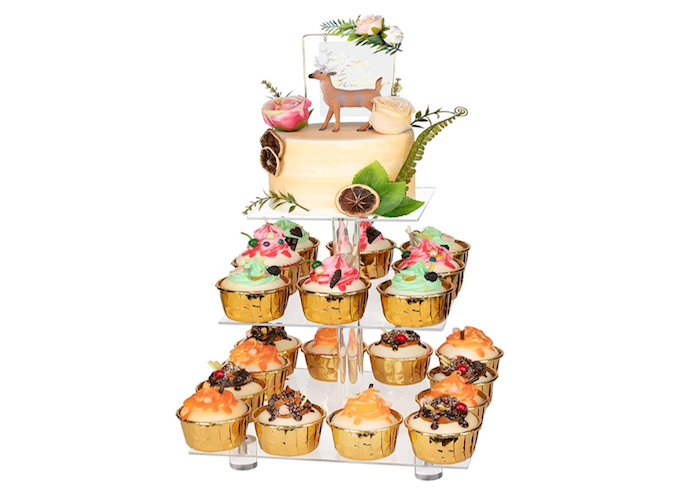 If you tend to throw more intimate gatherings, you’re probably not going to need a large four or five-tiered cupcake stand for your parties. No point in buying a model that can hold five dozen cupcakes if you only bought 25 or so for the event, after all. You may prefer a smaller but still strong and aesthetically pleasing, three-tiered cupcake stand like this one. The acrylic is resistant to scratching and breakage, stabilized by the central rod design with screws on each level. It’s also easily taken apart and reassembled, is dishwasher safe for your convenience, and has four rubber feet that protect your tables and surfaces. Thanks to the clear body, this cupcake stand can be used interchangeably at any and all events or parties, never clashing with any decorations or color schemes. All three tiers, stacked in descending size (the top one is 6 inches wide, the middle one is 8 inches, and the bottom one is 10 inches), are square-shaped. Altogether they can hold 28 standard-sized cupcakes. If you ever need even fewer tiers, this cupcake stand can be assembled with two levels instead of three. There are 4 inches in between the tiers to protect your cupcakes and desserts. There are two other size options with even wider clearance between the tiers if you ever want more room. You can also buy the two larger sizes without a base if desired. 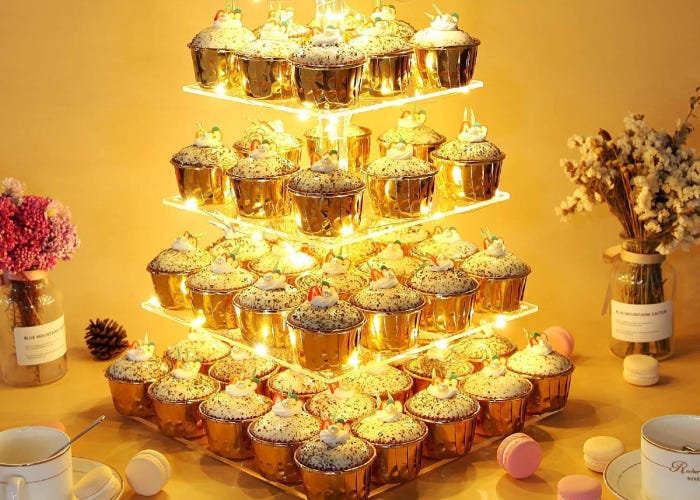 While all cupcake tiers are decorative, a light-up model like this takes this function to the next level. The LED string lights create a stunning effect when lit up, especially if the overhead lights in the party room are switched off. There are small notches along the edges of the stand’s tiers so that you can arrange the lights however you wish without needing to tape them in place. Even better, the string lights come in three different colors (blue, gold, or multicolored), so you can pick whichever best suits your party or event. The transparent acrylic body will reflect and enhance the lighting without distracting or taking away from it. The acrylic is food-grade quality, and each tier is held firmly in place to the center acrylic rod by screws. There’s an embedded copper nut in the middle of each acrylic rod as well, which offers extra stability and protection. When fully assembled with all five square-shaped tiers, there are 4 inches between each level, and the entire cupcake stand can hold about 60 stand-sized cupcakes or 15 total pounds of food. If you ever need to use this stand for a smaller amount of cupcakes or dessert, the tiers can be removed and reassembled into a two-, three-, or four-tiered stand instead, giving you plenty of flexibility for re-use. This light-up model is also available in a four-tiered option, with either square or round tiers.

Add some extra flair or decoration to your next event with this acrylic cupcake stand and its LED string lights.

Sometimes when it comes to cupcake displays, you need a stand that offers length rather than height. Maybe your event features long, narrow buffet tables, so a stand that mimics them will suit the look better. Maybe your cupcakes have very tall, elaborate frosting and decorations, and you want to make certain there’s enough space for the toppings. Maybe you want to ensure all the cupcakes are front and center on display instead of several being tucked away at the back of the stand. Or maybe you just prefer the look of a shorter, wider display to a tall, narrow one. Whatever your reasons, this shelf-like cupcake stand is a great alternative to traditional cupcake towers. It’s 12 inches long and made of thick acrylic panels and legs, shaped like a small set of stairs. You can buy this model with two or three tiers as needed. Some assembly is required, though you’ll receive all the hardware you need to put this stand together, including screws to hold it steady. Be sure to remove the protective film on all sides before you put it together. 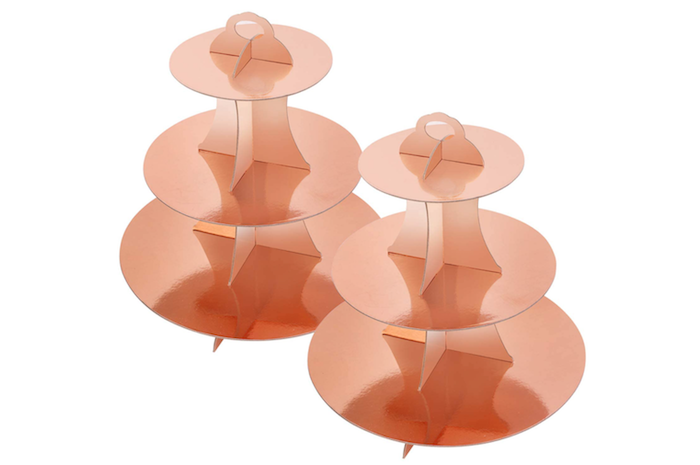 If you’re hosting a large event with a high number of guests, one cupcake stand alone might not be enough, no matter how large. Or, even if the event isn’t quite so large, maybe you want different displays for different cupcake flavors or different types of desserts. Fortunately, this colorful, shimmering cupcake stand is sold in pairs, giving you two aesthetically pleasing models for the price of one. They’re made out of high-quality, recycled cardboard that is eco-friendly and much sturdier than most. Unlike standard cardboard, you should be able to use these more than once. Both stands have three round, differently sized tiers with 4.6 inches in between the three levels. Each stand holds 24 standard-sized cupcakes, so you’re able to display 48 cupcakes altogether between the two. Assembling and disassembling the stands is quick and efficient, with nonslip pegs to hold them in place when fully set up. There’s also a suspension hole at the top of both stands, allowing you to hang them if desired or carry them while fully assembled. If the rose gold color doesn’t suit your event, there are eight other color options to choose from, each with the same lovely metallic sheen that will suit any event.

A pair of colorful, aesthetically pleasing cupcake stands for those times when one alone isn't enough.

READ NEXT
Meghan Herlihy Meghan Herlihy is a full-time writer for LifeSavvy and has written across a wide variety of topics, genres, and formats, including radio talk shows, local sports journalism, and creative original fiction. She received her bachelor's degree in communications from Ithaca College and a master's in writing from Johns Hopkins University. When she's not writing, you're most likely to find her reading a book, petting every dog within eyesight, and indulging in her love of travel. Read Full Bio » 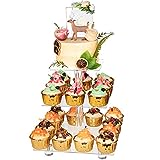 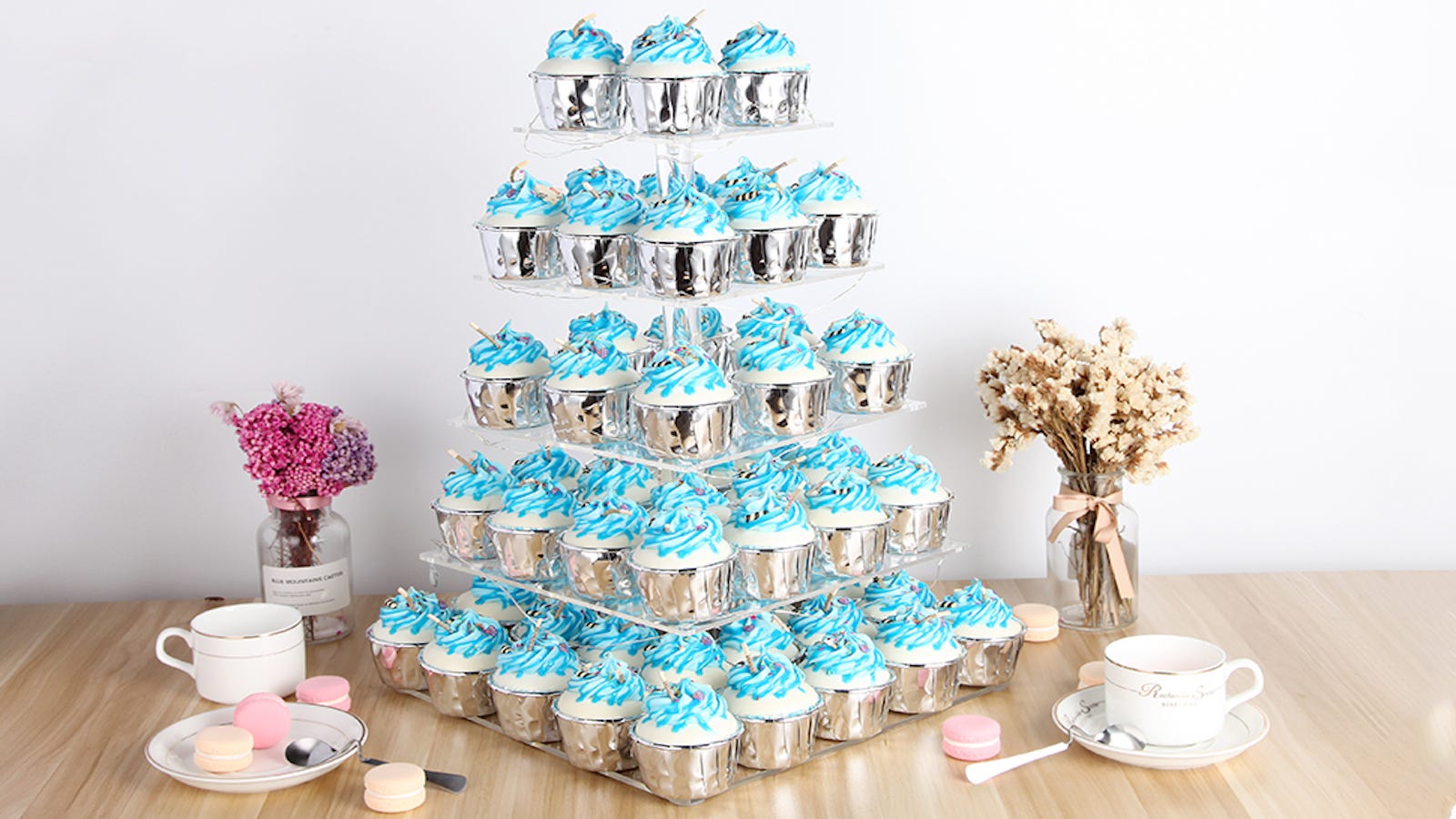