3D printing technology could arguably become the most important innovation since the personal computer. If you haven’t explored the exciting world of 3D printing yet, don’t fret, your options are better (and more affordable) than ever before.

While reading the news or chatting with friends, you have probably heard about 3D printing. But what exactly is it, and how does it work? The term 3D printing covers several innovative technologies that allow for producing parts, products, and objects using various materials. Two common 3D printers that are ideal for use at home are Fused Filament Fabrication and resin Masked StereoLithogrAphy. Today, we will focus on FFF 3D printers due to their accessibility and effectiveness at producing incredible builds.

FFF 3D printers use thermoplastics that are fed through a hot nozzle and extruded layer-by-layer to form a solid object. This style of printing requires minimal post-processing but can take some tweaking for optimal results. Thankfully, this technology has become much more affordable for the average consumer over the years, so we are confident that our guide will showcase some options that are well within your budget.

Shopping for a 3D Printer

When shopping for a 3D printer, it is always a good idea to do your research. Build results will vary based on the skill and precision with which one calibrates and maintains their 3D printer, so don’t let one or two negative reviews sway your decision-making process, especially if they come from beginners. Additionally, consider these three factors before deciding on the model that’s right for you:

If you are new to the world of 3D printing, you will want a product that is not overly complicated to set up yet allows you to learn the ropes as you calibrate and customize it to perfection. The Official Creality Ender 3 V2 Upgraded 3D Printer allows you to do this and much more. Featuring simplified filament feeding, a high-quality carborundum glass platform, and a self-developed silent motherboard that works wonders, this 3D printer is capable of printing incredible builds. It’s also incredibly sturdy for the price and sports enough upgrades over the Ender 3 to justify the investment.

This 3D printer features straightforward assembly and excellent build quality while allowing beginners to learn the basics and implement upgrades.

For those seeking a 3D printer that is capable of amazingly detailed larger builds at the best price, the ANYCUBIC MEGA X 3D Printer is for you. This printer is incredibly simple to assemble and configure right out of the box and sports a unique design that greatly aids its printing precision. Its one-piece all-metal body is also incredibly rugged, which will come as good news to those who have had to upgrade their printer due to durability reasons. This printer also features a lot of improvements that you would otherwise have to buy or print if you invested in a lesser 3D printer. From the extruder to quiet steppers and leveling assistance, this product is a great investment for those who want amazing quality right out of the box.

If you are on a serious budget but are looking for a quality 3D printer, you can’t go wrong with the Official Creality Ender 3 3D Printer. While the V2 (featured above) does include meaningful upgrades, this model possesses the sturdiness, quick-heating hotbed, and precise printing of the V2 at a fraction of the price. This 3D printer leaves little to be desired in terms of hardware, especially given its budget price. But the print quality is where this 3D printer really excels beyond other models at its price range. While you will need to fine-tune it to attain optimal results (and maybe even invest in a few inexpensive upgraded parts), this is the best 3D printer on the market for those on a budget.

Sporting an advanced extruder, sturdy frame, and quiet operation, as well as the capability of high-quality builds, you won't find a better 3D printer at this price.

For those who want to skip assembly and calibration and jump headfirst into 3D printing, the Monoprice 121666 Mini Delta 3D Printer is a must-have. This unique 3D printer is great for amazingly detailed smaller builds, making it a sound choice for those who put the build’s quality and precision above the build’s size. It also arrives fully assembled and sports an auto-calibration feature that continuously self-calibrates to save you a lot of time and effort as you begin putting this 3D printer through its paces. This product also scores major points for its durable steel frame and 50-micron layer resolution, making it one of the most impressive and rugged options out there for those who are interested in printing smaller builds.

This 3D printer is practically ready to print right out of the box, making it ideal for beginners.

Last but not least, the FlashForge Adventurer 3 3D Printer is a great choice for those seeking something user-friendly yet technically sound. Featuring a removable nozzle, simplified filament loading, and quiet operation, this 3D printer definitely does well to improve processes that can become a chore on lesser models. It also prints faster and more accurately than most 3D printers in its price range while prioritizing ease of use, making it a great choice for newbies and experienced users alike. While this is not a model to print massive builds with, it does enough right to easily justify a spot on this guide.

This 3D printer comes with many helpful, user-friendly features such as auto-leveling and a detachable nozzle. 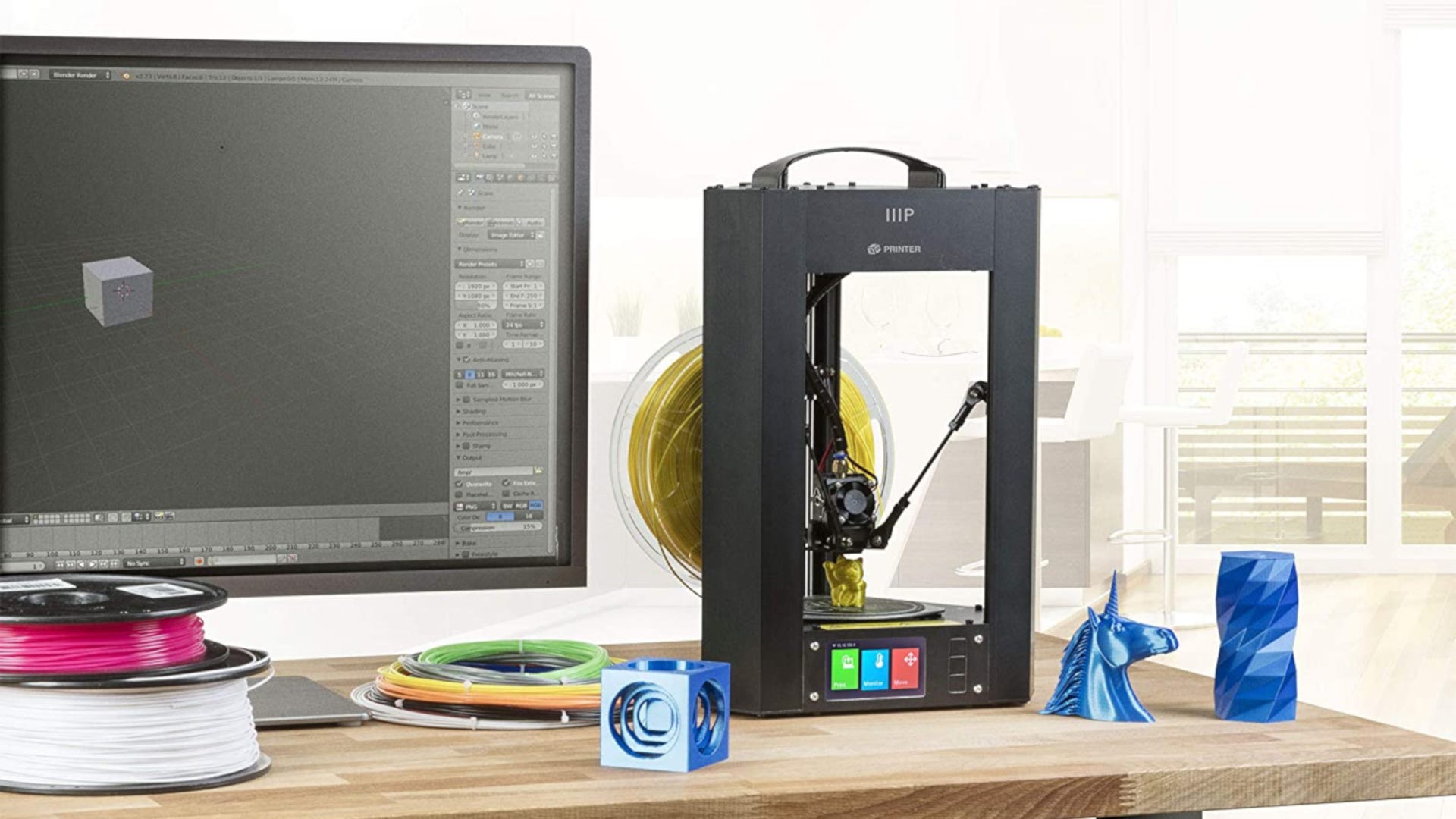 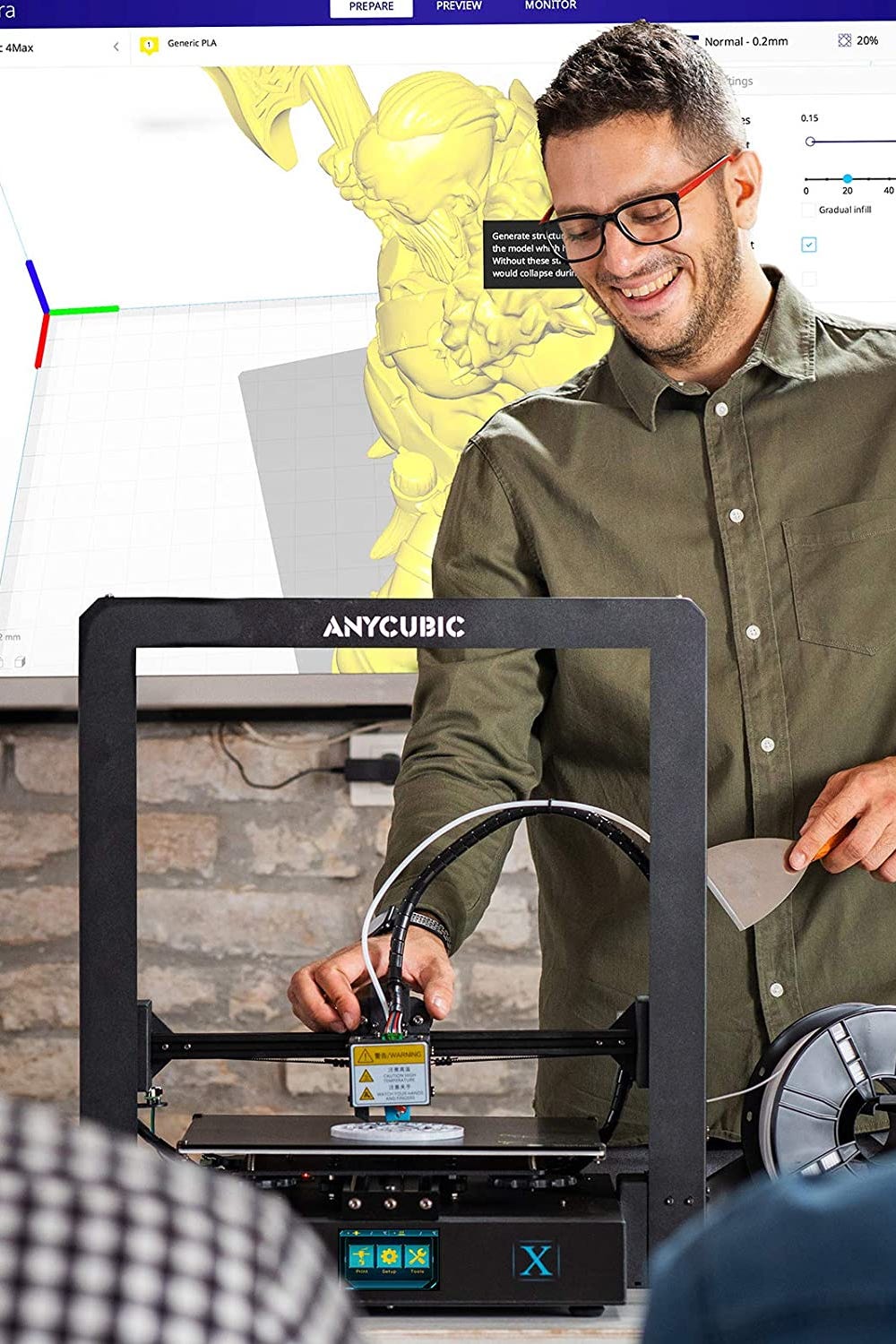