If you're serious about cooking, you know that almost nothing beats a cast iron skillet. When properly seasoned, you'll create sumptuous dishes that can't be replicated by traditional non-stick pans or even the trusty air fryer. If you're ready to enter the big leagues of culinary delight, check out these cast iron skillets.

Why buy a cast iron skillet?

RELATEDCast Iron Cookware Isn't as Fussy As You Think: Here's How to Clean It

Cast iron is a premium cooking material. It can offer more even heat which ensures that foods are properly cooked. More importantly, cast iron is incredibly durable. This means that if you take care of these pans, they can last for decades—and often they do. Many people inherit cast iron cookware from relatives and friends and enjoy them for years. While maintenance for cast iron is a bit different than for other cookware, it’s worth the extra bit of effort for the delicious results you get.

What should you consider when shopping for a cast iron skillet?

Why do you need to season cast iron?

Unlike non-stick skillets, cast iron isn’t a naturally non-stick material. So, new cast iron is usually treated with oil that’s baked into the surface. This process not only creates that beautiful black sheen that’s synonymous with cast iron, but it also helps to mimic non-stick properties so that your food doesn’t stick to the surface, and it keeps the cast iron from developing rust in between uses.

Our Picks for the Best Cast Iron Skillets

Pros: If you’re easing into the cast iron cooking life, you might not be ready to invest too heavily into this cookware style. Lodge is wallet-friendly and universally loved as an entry-level cast iron brand for cooks everywhere. This is a 12-inch skillet that offers plenty of versatility. And you’ll get a silicone hot handle holder, so you can maneuver your pan without burning your hands.

Cons: While Lodge is a pretty much universally loved brand, this is a heavy pan. This is good and bad. Although the weight adds to its durability, it also means this can be difficult to maneuver when the pan is hot.

Bottom Line: New applicants to the cast iron cookware club will like that Lodge is a solid entry-level offering with a pre-seasoned pan that comes with a silicone handle for easier management. But even though there’s lots to love, the heavier weight on this pan can be difficult to handle when it’s hot.

A wallet-friendly cast iron skillet that works for a wide range of budgets.

Pros: If you’re genuinely working on a tight budget, then every dollar counts. This modestly priced skillet from Utopia is another solid option that’s pre-seasoned and durable enough to be used on a stovetop or over a grill.

Cons: Unlike our top pick, this skillet doesn’t come with a heat-safe handle. Make sure you use an oven mitt every time you move or touch the pan while it’s hot.

Bottom Line: Budget-conscious shoppers will like that this is a modestly priced skillet that comes pre-seasoned. It measures 12.5 inches in diameter to accommodate most meals.

Pros: There’s no denying that between the two Utopia entries in our round-up, this is the better investment if you’re ready to dive into the world of cast iron. With three skillets in different sizes (6, 8, and 10 inches), there’s plenty to love here. You’ll get pre-seasoned pans that offer even heat distribution and can accommodate a wide array of cooking needs.

Cons: As with the other Utopia entry, this wallet-friendly set of pans lacks a handle cover.

Bottom Line: If you’re trying to build a cast iron cookware collection quickly, this three-piece set of pre-seasoned pans from Utopia is a smart entry solution. However, the lack of a handle cover is concerning.

A complete solution for novice and experienced cast iron cooks.

Pros: If you’re ready for a legitimate cast iron skillet, this option from Cuisinel is perfect. The 10-inch skillet comes with a matching cast iron lid and customized silicone holders for both the pan and lid handles. You’ll also get a scraper for any stuck-on food, but this pan is pre-seasoned. The lid features a self-basting design that’s intended to keep food moist.

Cons: More experienced cast iron cooks may find that these pans have a rougher texture. Some people noted that the rough texture could scratch glass cooktops and also might encourage food to stick to the pan.

Bottom Line: This all-in-one cast iron skillet is designed with a self-basting lid to optimize moisture and prevent dryness while cooking. And with covers for the pan and lid handles, your safety and ease of use are a priority. But the rougher texture of the pan might encourage food to stick easier than a smoother cast iron pan.

The perfect solution for Southern fried chicken and other oversized dishes.

Pros: For those that want to cook larger dishes, you’re going to need a cast iron skillet that’s up to the task. This 5-quart deep cast iron skillet comes with a lid and is designed for exactly these tasks. Whether you’re whipping up Southern fried chicken or dishes that require a taller pan, this pick has you covered. You’ll also get dual pouring spouts and a roomy handle grip.

Cons: This is a slightly more expensive pan, although it’s still within the average range for cast iron. However, the bigger issue is that you don’t get handle covers for either the pan or the lid.

Bottom Line: If you’re trying to cook larger meals, you’ll want this deep cast iron skillet that can double as a Dutch oven. You get dual spouts and a lid to lock in moisture while cooking.

Nothing beats cast iron in the cooking world. Along with its durability, you’ll get enhanced cooking, a more even heating experience, and cookware that can transition from gas to electric cooktops, as well as ovens and over campfire flames. Just be sure to invest in handle covers for your safety. 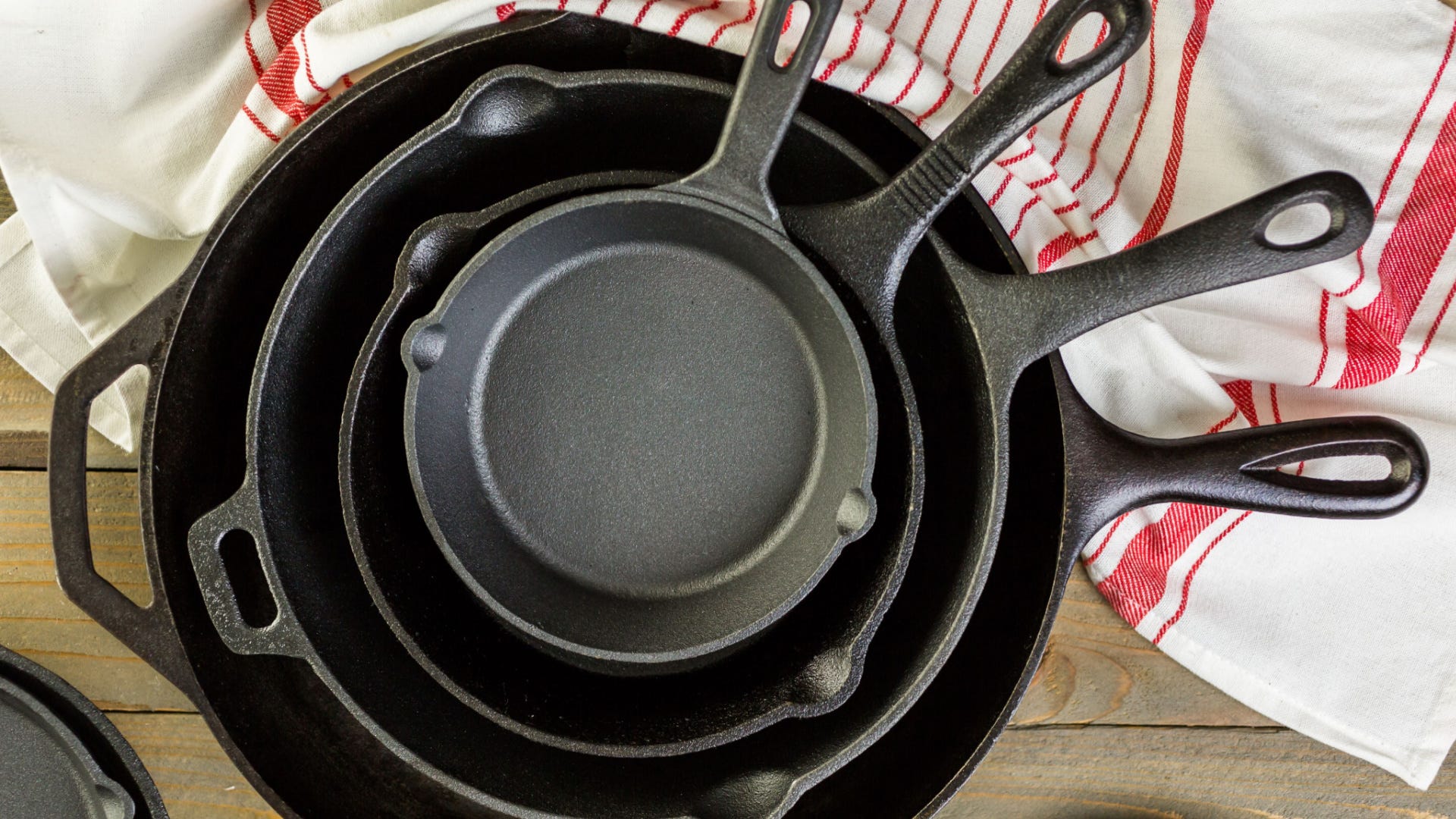 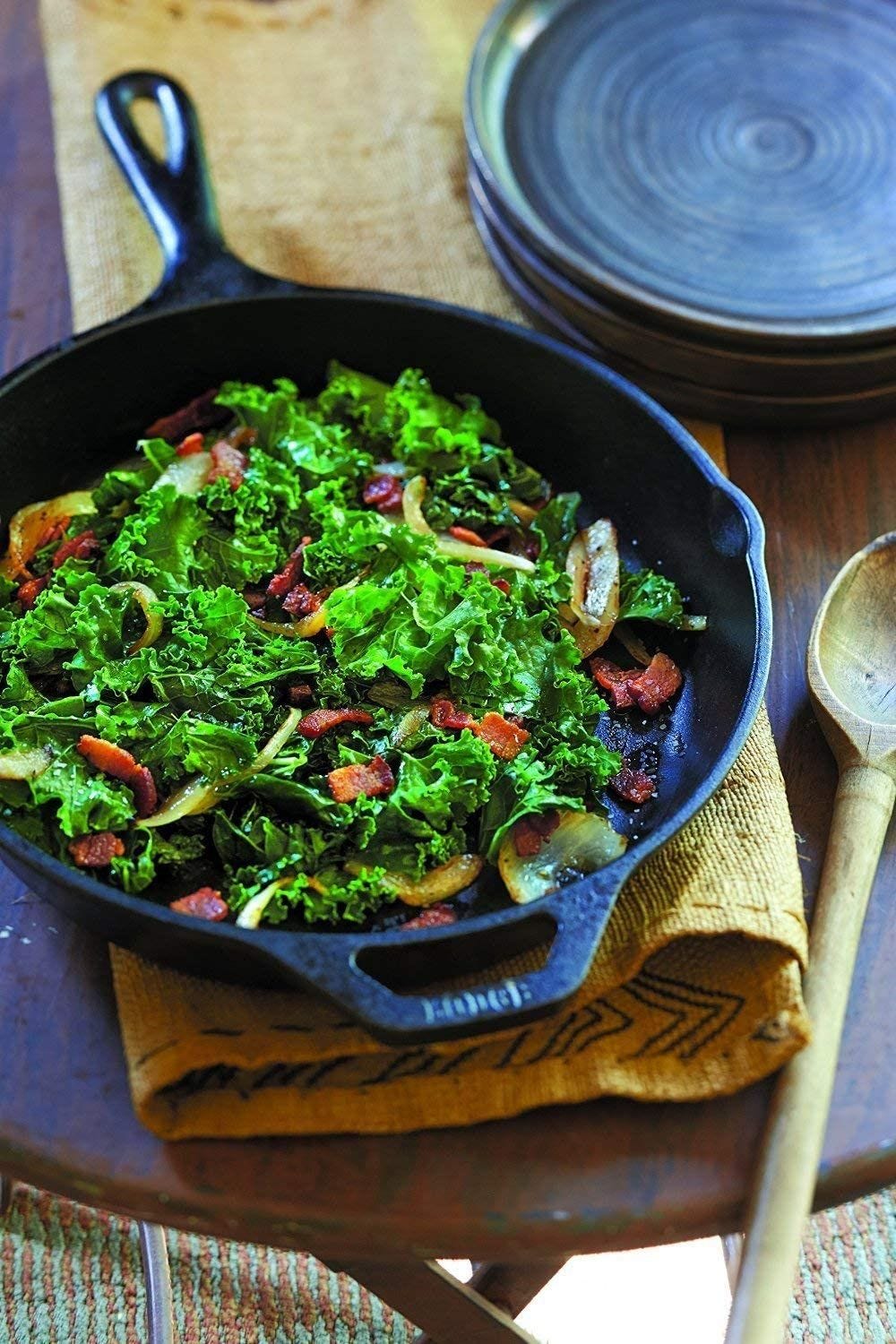