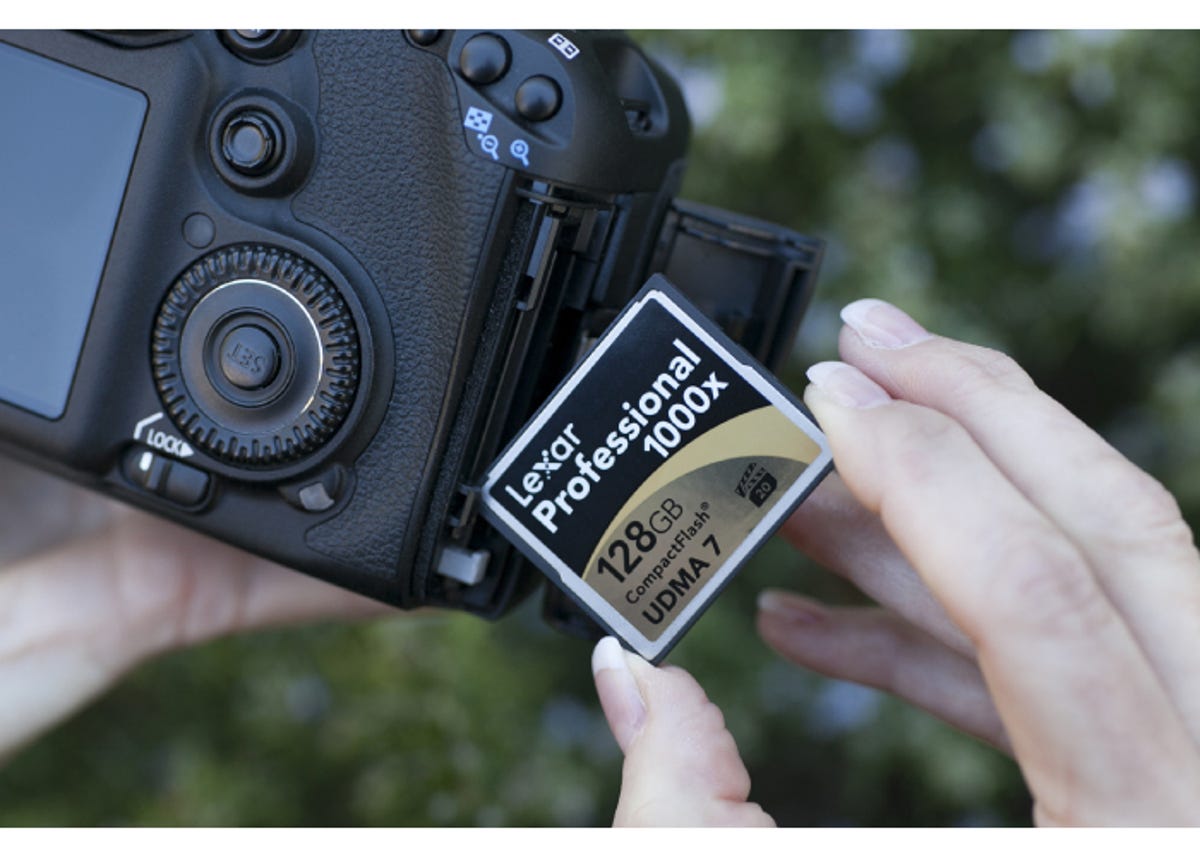 The CompactFlash card, a decidedly earlier model of memory card for cameras, is still a wholly dependable means of storage for a variety of digital photo and video devices. It remains one of the most in-demand memory cards on the market, utilized by the likes of Nikon and Canon cameras. While stiff competition may rear its head, what makes the CompactFlash card so useful over two decades is its ability to adapt to the market while maintaining reasonable prices for its top-quality perks. If you’re a newly minted photographer or a seasoned videographer in need of a new memory card, here are some we recommend.

Consider these factors when buying your next CF Card: 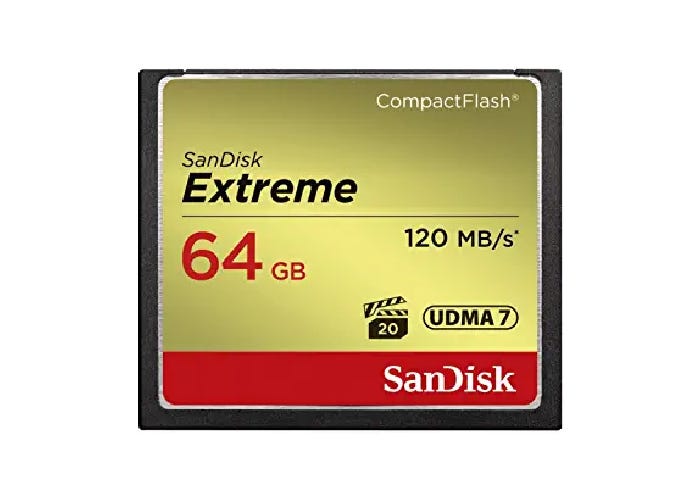 An ideal option for mid-range to high-end DSLRs, the SanDisk Extreme CompactFlash Memory Card offers users a well-balanced contrast between cost and efficiency. Among this CF card’s notable features is a write speed of up to 85 MB/s and a read speed of up to 120 MB/s, which makes shot performance and the transfer process quick and efficient. With 64 GB of storage in its bag, this memory card allows for longer sessions of professional-grade video capturing and raw burst shoots at a good price. This CF card also features an RTV silicone coating that protects against most rough and tumble instances, ensuring the safety of your files. 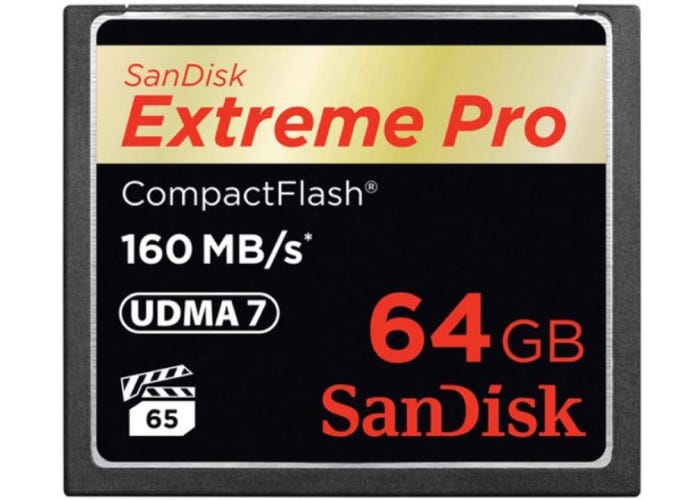 When you combine the fastest read and write speeds and the best video performance capabilities into a single package, you don’t just end up with another SanDisk property; rather, you get the Extreme Pro-model of its CompactFlash Memory Card. All of the same highlights you can expect out of the first line of SanDisk’s Extreme are present but heightened. With this memory card, your DSLR is gifted the card’s VPG-65, allowing for greater quality HD and 4K video performance while only sustaining 65 MB/sec of write speed. This memory card’s RTV silicone still ensures your files’ safety and then some, as it can outlast negative 13-degree freezes and 185-degree heat waves. Its largest development, however, is its increased read and write speeds. This memory card is capable of handling continuous shot-to-shot performance with up to 150 MB/s of write speed, and delivers an even better transfer process, allowing users to move data from card to computer at up to 160 MB/s of read speed. 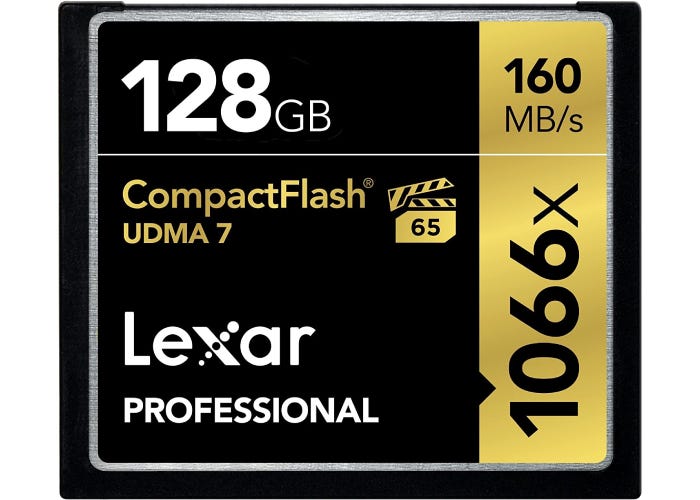 An increased storage capacity allows any user not only more file space but also the opportunity to shoot for longer periods of time without being interrupted. With double the amount of storage space than most CompactFlash cards on the market, the Lexar Professional is capable of capturing raw, higher quality images and extended HD, 3D, and 4K video recordings on a DSLR camera, and can store them with ease. UDMA 7 technology fuels this memory card’s high-speed read and write performance, so users can shoot, transfer, and begin editing their files with one of the fastest memory cards available. Having more space for files may also usher in thoughts of having more files to lose, which is why this memory card also includes a free download of Image Rescue, a software that recovers photos and video files if your card has been corrupted.

With double the storage than most traditional CompactFlash cards, this one offers users 128 GB of high-quality photo and video shoots. 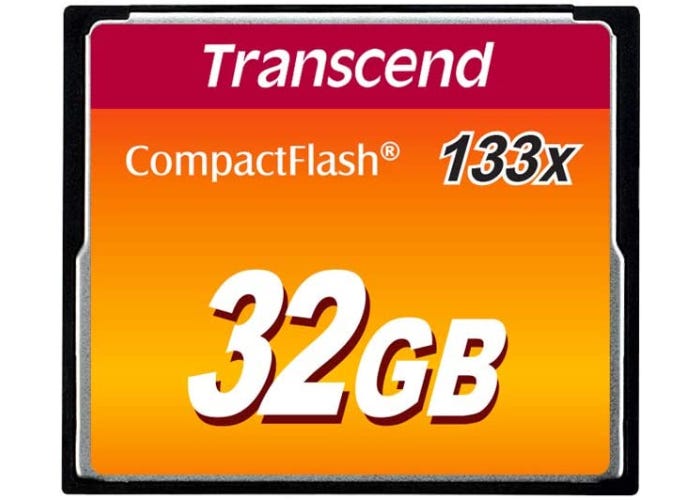 While it may not be an immediately recognizable brand name, Transcend more than supplies as a conveniently priced memory card for the average household photographer. With 32 GB of storage capacity and a moderate transfer speed of 50 MB/s, this memory card is the ideal choice for those who may still be working out the kinks with their new DSLR camera. However, this memory card still brings the bang for your buck, operating under Ultra DMA transfer mode 4 to respond quickly and without fail during those split-decision, burst mode photo shoots you just can’t miss.

A great CF option for beginners, this one offers users ample file storage and efficient transfer speeds for an easy-going photoshoot experience. 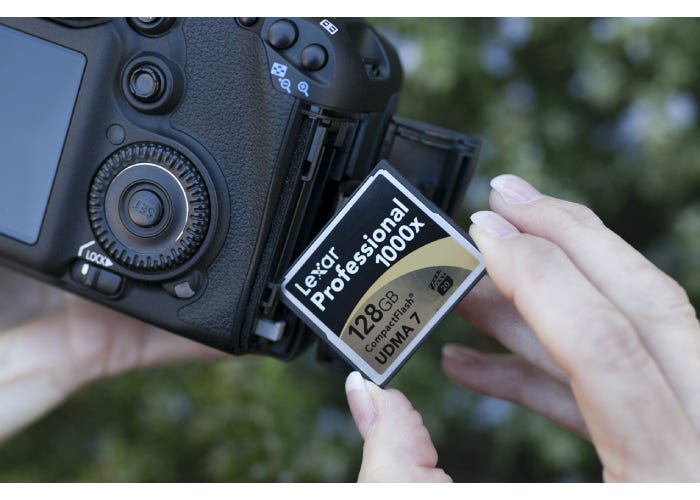