About LifeSavvy
and Meghan Herlihy

Whether it be to spruce up a dull evening or create some family bonding around the holiday season, flipping open your favorite (or a new) card game is just one of many ways families enjoy time together.

The card game has been a staple of family evenings spent indoors since kids ran around the prairie. It unites us in our long-standing urge to come together at the end of the day and to battle it out (in friendly competition) for a couple of hours. If you’re in the market for a new or classic card game, then here are a few options we think your family will love.

Why should you buy a game for the family?

RELATED5 Games to Keep Your Brain Sharp and Nimble

Simply put: playing card games with the family is just plain fun, and since there’s no shortage of them, you’re bound to find one or several that the whole family can get the hang of within a few minutes. Additionally, playing games actually promotes healthy brain development in users of all ages. So, even if you missed out on buying Boardwalk Avenue, you’re still winning in the long run.

What should you look for in a game for the family?

Is there a game you should avoid for younger children?

There aren’t “bad” card games, only games that don’t mesh well with the play style of your peers and family. When it comes to accommodating the kiddos, avoid card games that even older players still pull the occasional rage-quit over. Something that requires a great deal of mental attention/strain can be confusing instead of fun for younger users.

Our Picks for the Most Exciting Family Card Games

All of Us - The Family Trivia Game for All Generations

This trivia game has questions geared towards four different generations, so the whole family can play together.

Pros: This is the rare trivia game where senior citizens and youngsters can chime in. It’s a massive trivia card game that brings plenty of irreverent fun to multiple ages. There are different cards for different generations, from Baby Boomers to Generation Z, so every player only has to answer questions relative to their own age. Included in this card game are over 500 cards that cover five different categories for more than 2,500 questions. As there’s no shortage of cards to be found here, so you can play in groups with as few as four.

Cons: This game is really only suitable for kids 12 years and up, so your younger kids will have to wait this one out.

Bottom Line: Trivia card games are a family game night staple, and this particular trivia game is the rare version that doesn’t favor one generation’s knowledge over the other; grandparents won’t have to know the latest hit pop song, and teens won’t lose points for not knowing who Tony Curtis is.

Trekking The National Parks | The Board Game

Here's a fun, best-selling board game that teaches geography as you play.

Pros: Highly interactive and unlike most card game concepts on the market, this award-winning board game is ideal for families. The rules are easy to learn and follow and are printed on cards for kids to refer to. It’s not so simple that adults will grow bored or feel unengaged or unchallenged. It’s also educational as well as fun and entertaining, as you’ll be trekking all over a map of the United States, learning the geography of the country and its national parks plus some fun basic facts about the parks themselves. And the entire set, from the board itself to the playing cards to the gaming pieces, is extremely high-quality and well-made.

Cons: This game is only suitable for players 8 years and older since there is a decent amount of card reading involved. Additionally, only a maximum of five people can play at once.

Bottom Line: Great for users who enjoy games that educate as well as entertain, this map-trekking, award-winning board game offers the perfect balance between quiet strategizing and good-natured competition and ribaldry between players.

This seemingly simple card game features a unique twist that will have the whole family rolling with laughter.

Pros: This is another massive family card game that gets funnier when more people jump in, though it can be played and enjoyed with as few as three people. It’s an easy-to-learn yet side-splitting game where the person reading the card has to wear a mouthguard that hilariously garbles their words while everyone else tries to guess what they’re saying before time runs out. Despite having over 1,000 phrases, they’re all age-appropriate for even young kids. There’s also an adult-only version that’s more risque, as well as a deluxe extended version with expansion packs for even bigger groups.

Cons: The mouthguards will have to be properly cleaned and sanitized after each game to avoid spreading germs. The mouthguards are dishwasher safe to make this task easier, but it’s still an extra step that most family games don’t require.

Bottom Line: For users with preteens and up, this Kids Against Maturity: Card Game knows how to balance the crass content with wholesome moments to create a fun atmosphere, particularly among large groups.

This family card game offers a ridiculous premise that asks for little more than quick minds and even quicker feet.

Pros: Both mentally and physically exciting, this card game is all about thinking on your feet. The game is simple enough to pick up, as users collect cards and throw plushy burritos at one another. It allows for up to seven players to join a single game while accommodating smaller parties of two or three people as well.

Cons: The high-intensity gameplay demands a bit of ducking and dodging, and sometimes even running. If you’re playing in close quarters, this type of activity could lead to a problem.

Bottom Line: If you’re looking for a game that embraces the ridiculous side of family get-togethers, this Throw Throw Burrito: A Dodgeball Card Game will have you leaping and laughing all evening long.

This family drawing game is a hilarious, creative new version of the classic classroom game Telephone.

Pros: For a family favorite that almost everyone can pick up in a matter of seconds, this twist on an old classroom game asks for a steady hand and patient partners. The premise is simple enough: remember playing the Telephone game in school, where the first person whispered a phrase in their neighbor’s ear, and then by the time it reached the last person, it had become hopelessly distorted? This is the drawing-based, Pictionary-like version of Telephone. Stink at drawing? That’s the point. This is a game that finds the humor in our missteps. It comes with eight reusable whiteboards, eight dry-erase markers, eight wipe-up cloths, an hourglass, a die, and a box of prompts. There’s also a party version available for purchase for more extensive group play beyond the eight-player limit.

Cons: Understandably, while it’s the failing that often makes this card game so funny, some users may genuinely want to avoid putting their drawing skills to the test. Several pieces of this game will need to be replaced over time, namely the writing utensils when they run out of ink.

Bottom Line: This game combines two classics—Pictionary and the Telephone game—into one convenient box. It’s a great upgrade of game night staples and a modern alternative to the card games of yesteryear.

There are few better ways to bring the family together than through a couple of hours of welcome competition. These card games can cut through all of the jibber-jabber and help us enjoy time with loved ones. 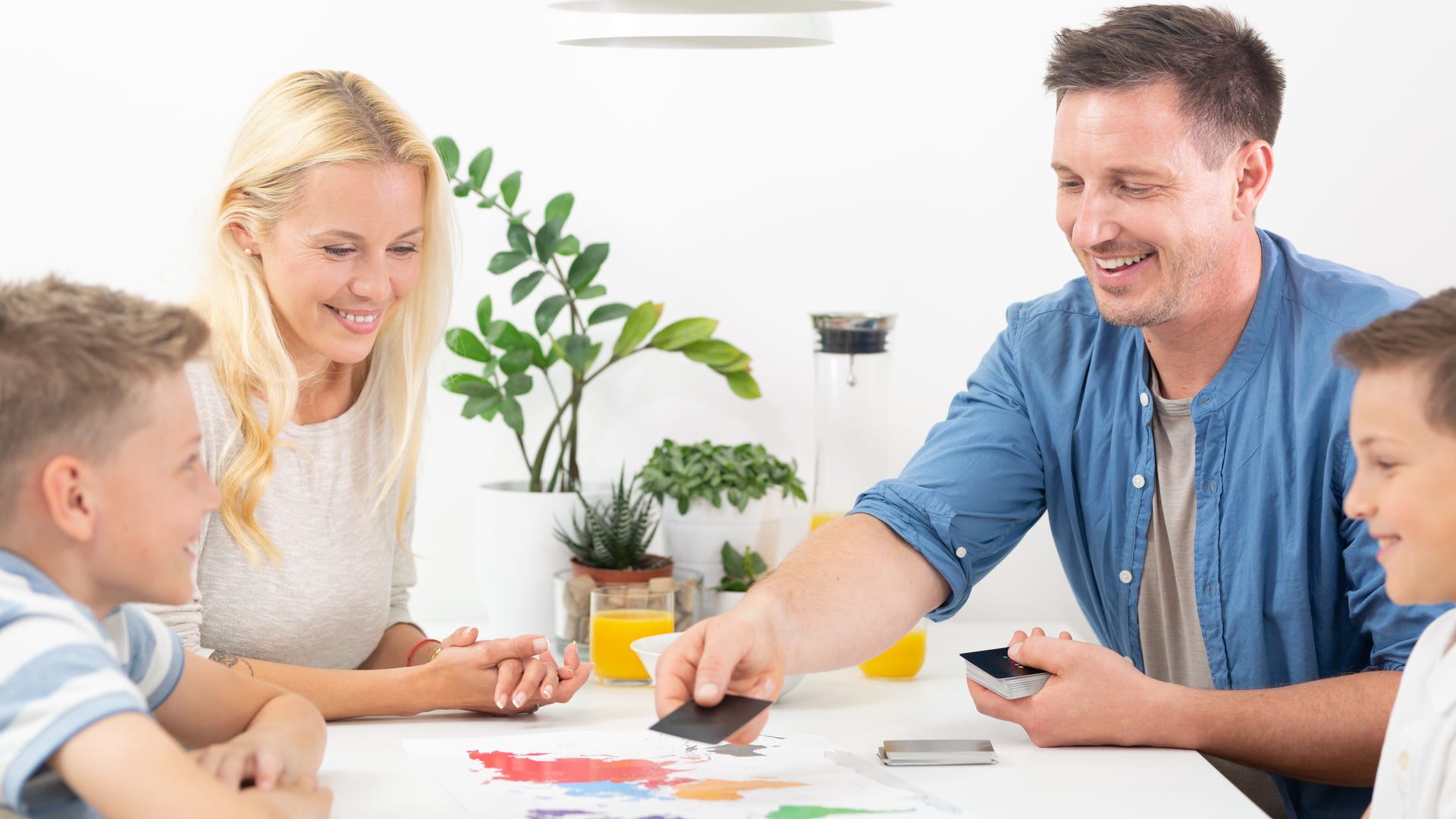 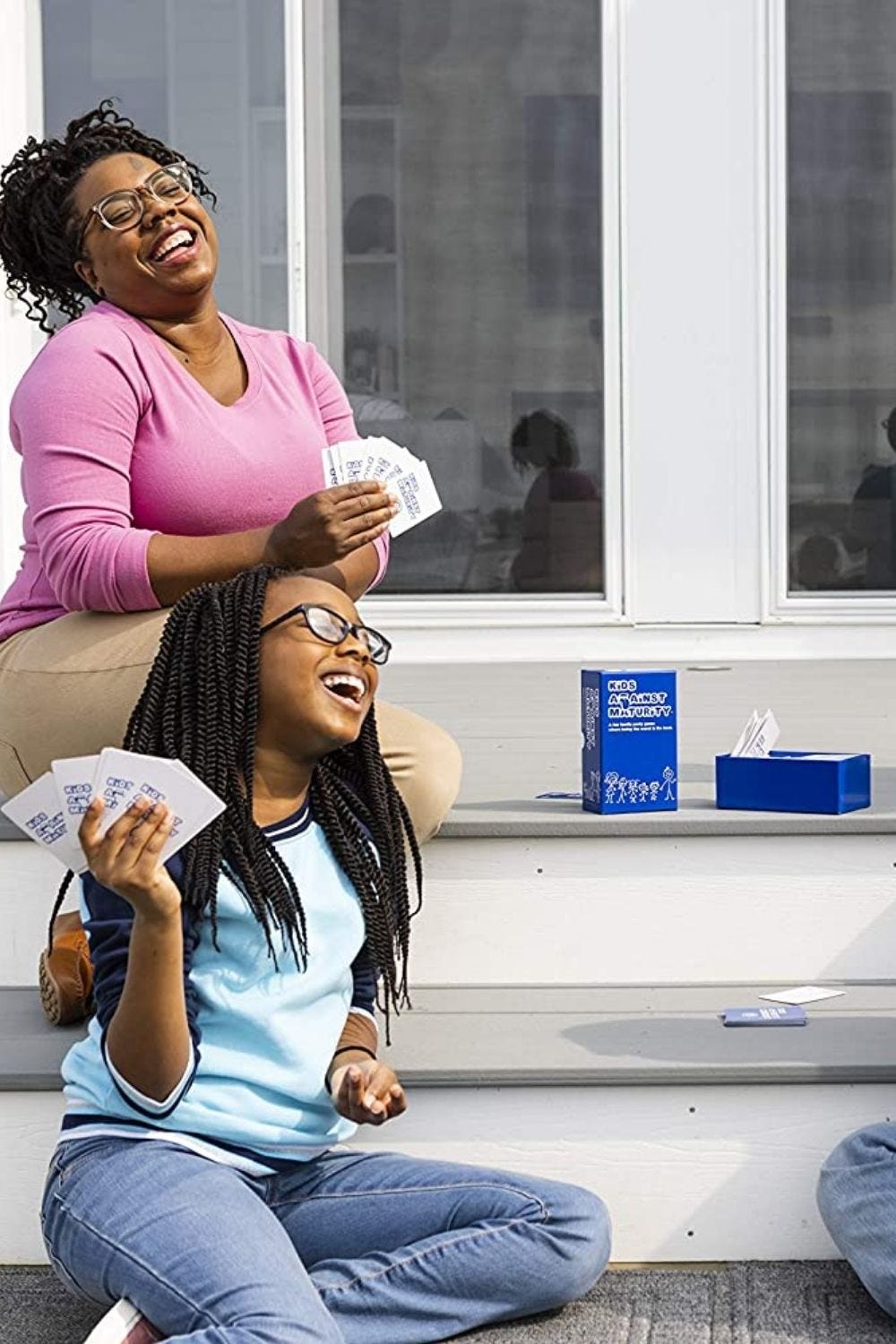