It may not always be the most eventful activity, but fishing remains a great way to bond with family, catch up with friends, or have much-needed solace. Here are our top picks for fishing lures for your next fishing adventure.

Why buy a fishing lure?

Your fishing lure may matter the most of all the required gear you’ll need. These small, artificial objects are shaped like fish’s natural prey and attached to the end of the line and hook. A fishing pole with some dangling string and a hook, nothing more, isn’t going to get the job done. You need something on the end of the hook to entice the fish, which is exactly what lures were designed to do. Catching a fish can be challenging enough when dealing with factors outside of your control without adding your challenges on top. Almost all fish species are drawn to live food rather than stationary or dead targets, and lures are meant to be moved and wiggled around to mimic live prey, making it more likely for fish to approach, swallow, and be hooked.

What should you look for in a fishing lure?

What is the difference between fishing lures and live bait?

There are advantages and disadvantages to using fishing lures versus live bait, as is often the case. Fishing lures are reusable, are far less messy, and are easier to switch and rotate between. Lures are also the superior choice if you plan to catch and release rather than keep the fish you catch since they’re more likely to swallow the lure than the entire hook. On the flip side, live bait is generally cheaper, less likely to get snagged on underwater fauna or debris, and doesn’t require constant movement or wiggling the way lures do. Lures are also most effective in areas heavily populated with fish, as bait is more likely to draw fish in from further away.

Our Picks for the Best Fishing Lures

From its organic movements to its ability to attract with noise, this lure makes catching bass a breeze.

Pros: Everything about these lures are crafted to the T, with lifelike details in their eyes, scales, and even their movement. This fishing lure’s three-jointed design allows for a more natural look and motion in the water, sinking slowly and advancing with the obliviousness that makes it irresistible to bass (and much other similar fish like perch and walleye). It even includes a built-in rattle that emits a tempting vibration for nearby predators to take a bite before getting snagged on the lure’s stainless-steel hook. You get a set of three lures with your purchase, and they’re available in 18 different colors and sizes.

Cons: Each lure only features one hook instead of two or three, so you may not hook every bite depending on the angle from which the fish attacks the lure. Because of their multi-jointed aspect, these lures may not hold up if snagged by larger-sized fish.

Bottom Line: One of the best options available for bass fishing in any water body, these lures offer incredibly detailed appeal with three-dimensional proportions and multi-jointed bodies. Between the lifelike swimming appearance this grants them and their highly realistic appearance, you shouldn’t have any issue roping in bass.

Realistic-looking and well-balanced, this little lure is ideal for hooking trout hiding in shallow depths.

Pros: If you want to target trout specifically, this little crank lure is well worth your time and money. Available in four possible color options, it features a stop-and-go, jerk bait action that trout are drawn to, plus a built-in rattle to catch their initial attention. Though small, this lure has two multi-hooks attached to increase your chances of latching a fish once it takes the bait. Thanks to its evenly distributed weight, you won’t have to worry about this lure sinking even when it’s not in motion. It’ll remain somewhere between two and four feet deep at all times.

Cons: While this lure is great for trout and other similar fish, you won’t be catching any bottom-feeders due to its even weight. It is on the smaller side, so it may not be large enough to hook bigger fish successfully.

Bottom Line: With its simple approach, well-balanced body, and pint-sized design, it is no wonder why this is the ideal choice for trout, even in shallow bodies of water. Although it was designed to target trout specifically, you’ll likely find other similar species of fish are drawn to it as well.

Well-stocked with a wide variety of options, this high-volume set of lures is a great buy that doesn't cost a fin and a tail.

Pros: With this freshwater lure kit, you’ll get an excellent bang for your buck, whether you’re just starting out collecting lures or want to expand your current assortment. There are a whopping 78 pieces in total—accounting not just for lures but other useful fishing accessories—for one exceedingly low, reasonable price. Not all the included lures are the same either. They come in various shapes, sizes, and colors, and they better attract a wider variety of different types of fish. What every piece does have in common is a reflective surface to make them more eye-catching underwater. The tackle box with a carrying handle also comes included with your purchase. If such a large set seems overwhelming to you or you already have a decent lure collection, a smaller 24-piece kit is also available.

Cons: Some of the lures in this set aren’t equipped with eyelets, making it much harder and more time-consuming to attach fishing lines to them.

Bottom Line: With its excellent variety of sizes, designs, and colors, it is no wonder why this set of lures is ideal for any body of freshwater fishing, from lakes to rivers to ponds and more. No matter what species of fish dwell in the depths, there’s sure to be a lure in this kit that will entice them.

Colorful and luminous, these shrimp-shaped lures can be used to entice saltwater fish, day or night.

Pros: These soft, silicone shrimp-shaped lures are ideal for saltwater fishing, as they won’t rust and can withstand repeated exposure to saltier waters. Most lures feature an eyelet attachment directly on the body to thread your fishing line through; the eyelet on these shrimp-shaped lures is attached to a strong metal wire with a swiveling barrel, making them much stronger and better able to hold up when grasped by bigger, heavier fish. The bodies of these lures all glow in the dark and feature a luminous bead on the wire, so they’re equally effective at night or in deeper, darker waters. They are shaped like real shrimp, but they feature simulation tendrils to mimic the appearance and movement of shrimp better. Since you get ten lures for one reasonable price, you know you’re getting good value for your money.

Cons: All ten lures are shrimp-shaped, so there aren’t any alternate shapes to attract a wider variety of fish. Also, each lure features a single hook rather than several, so they won’t be quite as successful at hooking fish.

Bottom Line: In the depths of a larger body of saltwater, you’ll want a noticeably bigger lure, more eye-catching, and has an uncanny resemblance to the bait you’re using. While you might not be thinking of using shrimp to catch a fish, this lure set has its mind on the bigger predators.

This cute 26-piece fishing lure set is perfect for anglers who want to try their hand at ice fishing, in either fresh or saltwater.

Pros: If you want to try ice fishing, this lure set is a great option. They’re weighted and designed to sink quickly into the water; they won’t hover at the surface or shallower depths in a counterproductive way to ice fishing. The bright hues of the lures’ bodies are color-coordinated in a variety of neon styles, each as eye-catching as the last. These colors can entice any fish into your path, no matter how dark the water is, and once hooked; you can count on one of the three carbon-steel hooks to reel in your prize. The lures are suitable for freshwater and saltwater use, and they’re available in several different quantity sets depending on your needs. No matter which quantity you buy, a plastic storage case comes included with your purchase.

Cons: While not outrageously expensive, this kit is a little pricier per piece. As lovely as the painted-on bright colors are, the paint may start to chip or flake over time.

Bottom Line: For the angler who wants to try ice fishing but doesn’t know where to start, this kit offers many reasons you should bet on it. Crack open this tackle kit to find bright, colorful freshwater and saltwater lures that will stand out in even the darkest, coldest waters.

Fishing may not be everyone’s thing at first, but with the right gear, anyone with time can cast off from a rickety dock, and one of the most important gear is the lure that attaches to your pole. After all, you’re not going to catch any fish if you can’t draw them in, so a good fishing lure is invaluable. 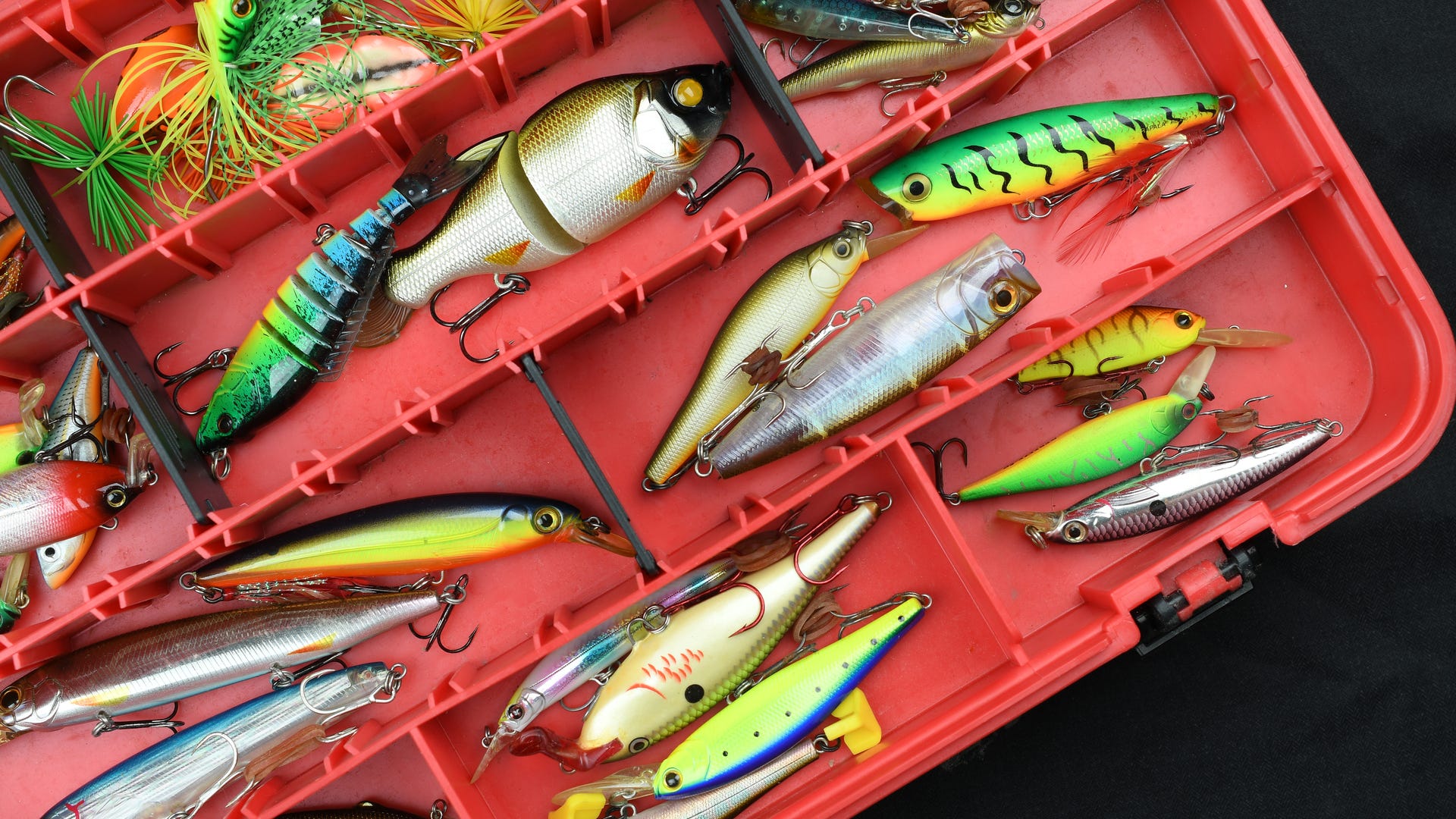 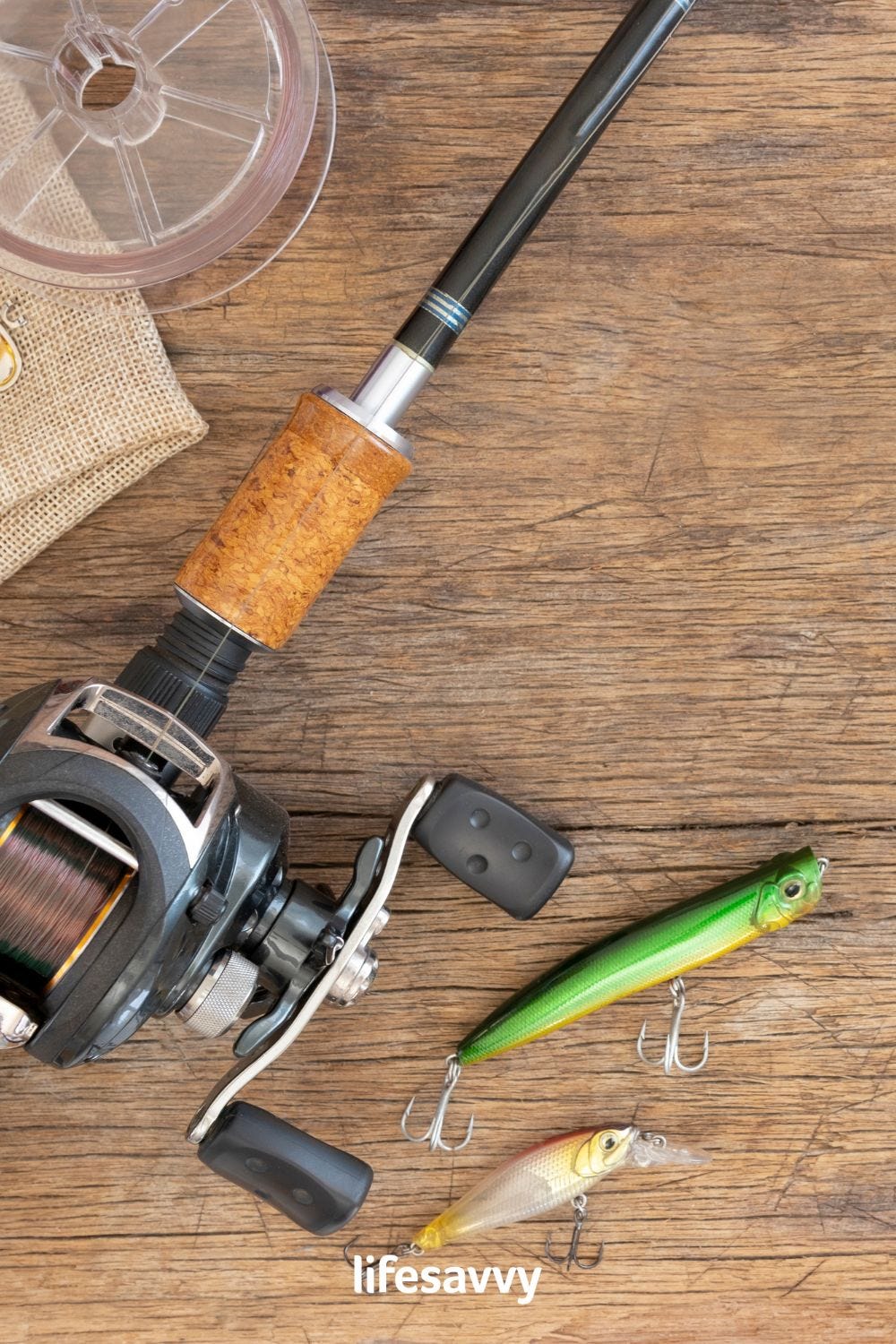