The Best Flying Toys for Kids

Who doesn't love a flying toy? If you're ready to upgrade your child's toy collection, get them started with these top picks.

The Best Flying Toys for Kids

Why buy a flying toy?

With children, play is actually a major part of their developmental process. Depending on their age, playing with toys—including flying ones—can be a great way to build and refine motor skills, boost cognitive thinking, and even introduce more nebulous (but important) concepts like sharing, taking turns, and problem-solving. And who doesn’t love throwing a frisbee or operating an RC plane? Thanks to modern technology, even drone flying can be a fun way to spend an afternoon. There are many different flying toy options for a range of ages.

What should you consider when shopping for the best flying toys for kids?

What flying toy is best for kids?

This is going to depend on the child you’re shopping for and their interests and age. Toy manufacturers usually list a recommended age range or at least a minimum age for a toy. Use this as a guide to pick accordingly. For example, getting a delicate drone with sensitive controls for a 4-year-old might be a bad investment, whereas a kid-friendly RC plane with simplified functions might be more appropriate.

Our Picks for the Best Flying Toys for Kids

An easy starter drone with a shallow learning curve.

Pros: These days, drones are ubiquitous toys that delight people of all ages. But if you have a younger kid, you might be hesitant to invest in some of the pricier models. This simple hand-operated drone is the perfect solution. Since it relies on the built-in five sensors as well as hand operation, your children won’t have to figure out how to operate manual controls. And this USB recharging offers up to 8 minutes of fly time with every 50 minutes of charging.

Cons: Even though this product is made with children in mind, the total flying time on a full charge is pretty low. With only 8 minutes of fly time, you can expect to have some frustrated children just a few minutes after you hand this drone to them.

Bottom Line: If you have young children who’ve been pestering you for a drone but you’re not ready to invest in a pricier model, this is a good entry option with fairly easy controls. However, it has a short flight time on a full charge.

A light-up drone that will offer endless delight.

Pros: If you’re looking for a fun, low-stress drone to give your children, this flying orb is a solid choice as well. With lights, 360-degree rotation, and five colors to choose from, it’s a fun way to keep the kids occupied. While you still don’t get an amazing flying time (just 8 to 10 minutes) on a full charge, you can completely recharge this drone in just 20 minutes.

Cons: What you get in shorter recharging sessions, you’ll give up in ease of operation. The most common complaint with this drone was that you had to learn to hold your hand in just the right position in order to get it to hover. However, many people noted that the drone tended to have a mind of its own.

Bottom Line: If you’re still prioritizing hand-operated drones, you’ll appreciate that this one offers a flying time range of 8 to 10 minutes and can be fully recharged in just 20 minutes. However, the operation can be frustrating as you have to learn to position your hands precisely to control the hovering mode.

A fun themed extension of the Hatchimals universe.

Pros: This is a fun hybrid between a drone and a more traditional toy doll. This Hatchimals Pixies Fairy can fly and comes with an auto-stop feature. Similar to other hand-operated drones, you won’t need a remote control to guide the toy’s movements. And it comes with a Crystal Egg Display Case as well as a USB charging cable.

Cons: A common parental complaint was that the Pixie had a knack for getting stuck in children’s hair—often leading to unwanted home haircuts.

Bottom Line: If you’re looking for something a little more exciting than the traditional hand-operated drones, this is a cute themed version designed to look like a pixie. It comes with an auto-stop feature, but it can get stuck in children’s hair if not careful.

A sleek helicopter that's perfect for budding drone pilots to operate with ease.

Pros: If you’re looking for a remote control flying toy that’s so cool you might want to use it when you’re child is at school, look no further than this gyro technology-based helicopter. It features a three-channel remote control that comes with two selectable frequencies. Plus, it has a colorful flashlight, so you can even fly it in the dark.

Cons: While most shoppers liked this pick, a few people did note that this isn’t the most stable flying toy if you want to use it outside.

Bottom Line: If you intend to do most of your flying indoors, this is a solid entry option for drone flight. But if you want to head outside, you might want to keep looking.

Enjoy an immersive game of laser tag that gets the kids moving with this fun flying drone target.

Pros: If you’re familiar with traditional laser tag, this is a fun update since you’re no longer shooting at each other but at a moving target. This simple game is ideal for kids as young as 5, but even adults can get in on the fun. Choose from a single blaster set or one that comes with two blasters. Everyone will love the fun light and sound effects and the fact that you can switch between four different play modes on the laser blasters.

Cons: A common complaint we saw with this toy was that the sound effects could be too realistic. Specifically, the shots sounded more like real bullets rather than like a ray gun.

Bottom Line: If you love the idea of a more active game that gets the blood pumping and your kids moving, this laser tag game is a fun pick.

A simple flying toy that can offer endless hours of fun and doesn't require batteries.

Pros: If you’ve bought a child a toy that requires batteries, you likely already know that you can quickly develop a love-hate relationship with that toy. On the one hand, it makes the kids happy. But on the flip side, having to hunt down fresh batteries every few weeks can be a nightmare. Put an end to that with this fun set of battery-free gliders. Each plane is 17.5 inches large and relies on the basic rules of aerodynamics to operate. Plus, they feature light-up LED cockpits.

Cons: If your glider falls on rougher surfaces like asphalt, you might end up with a few cosmetic scratches on the glider.

Bottom Line: If you’re looking for an easy-to-use glider that most kids can easily manage and that most adults will enjoy too, this is a solid choice.

Flying toys are a great way to get kids off their screens and outside. As long as you ensure that the toy you select is age-appropriate and offers decent flight time, there’s no reason your child won’t love it. 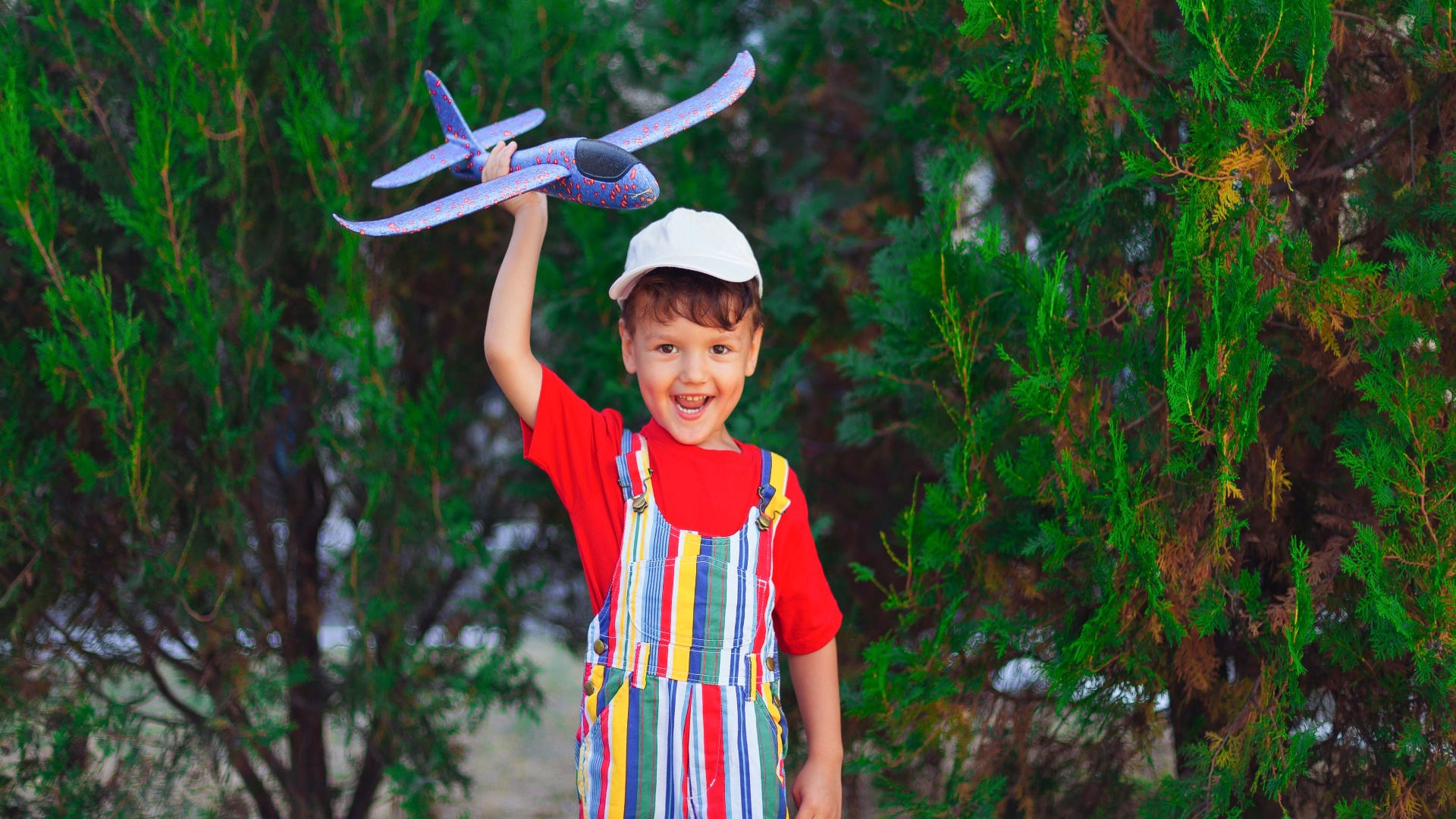 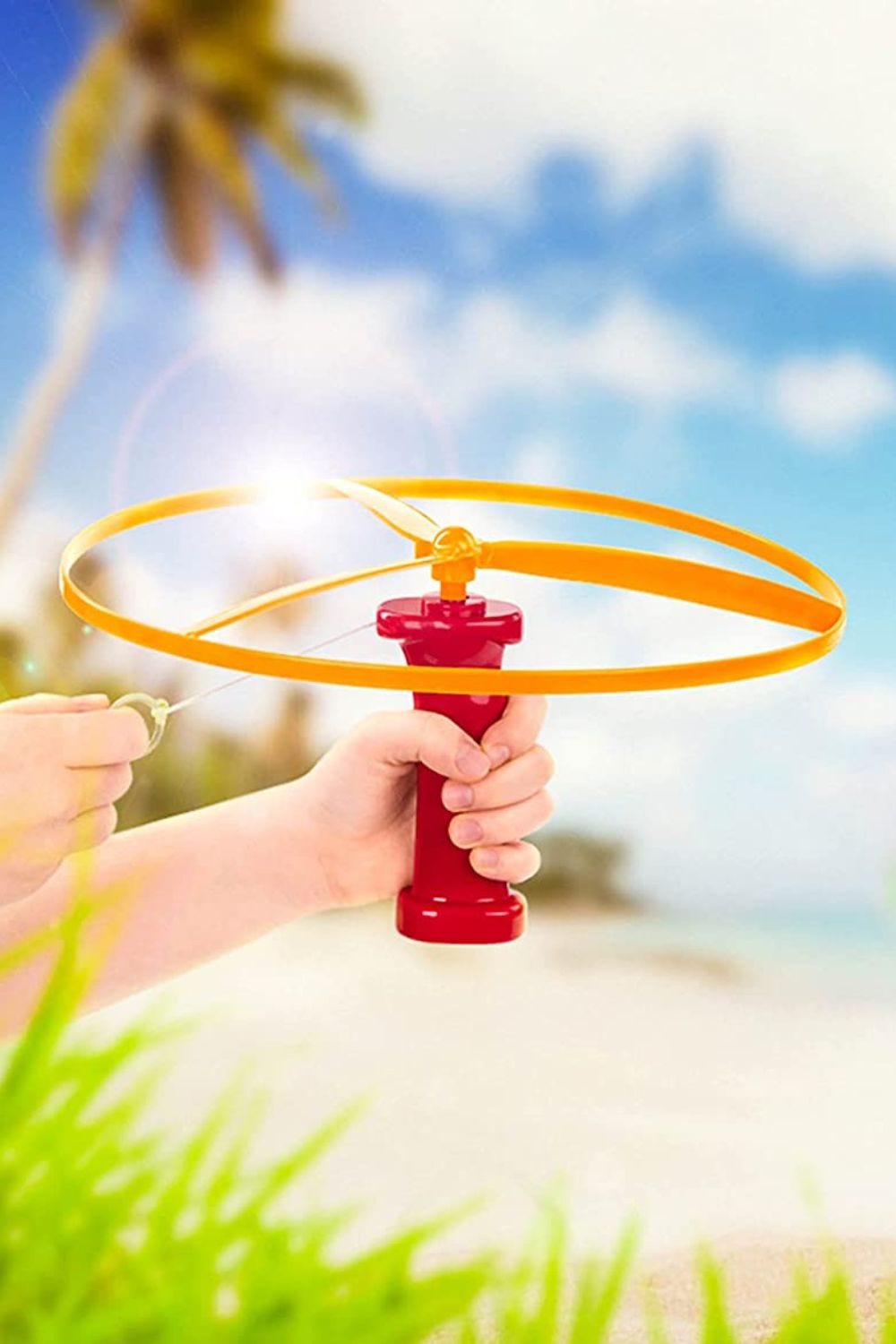