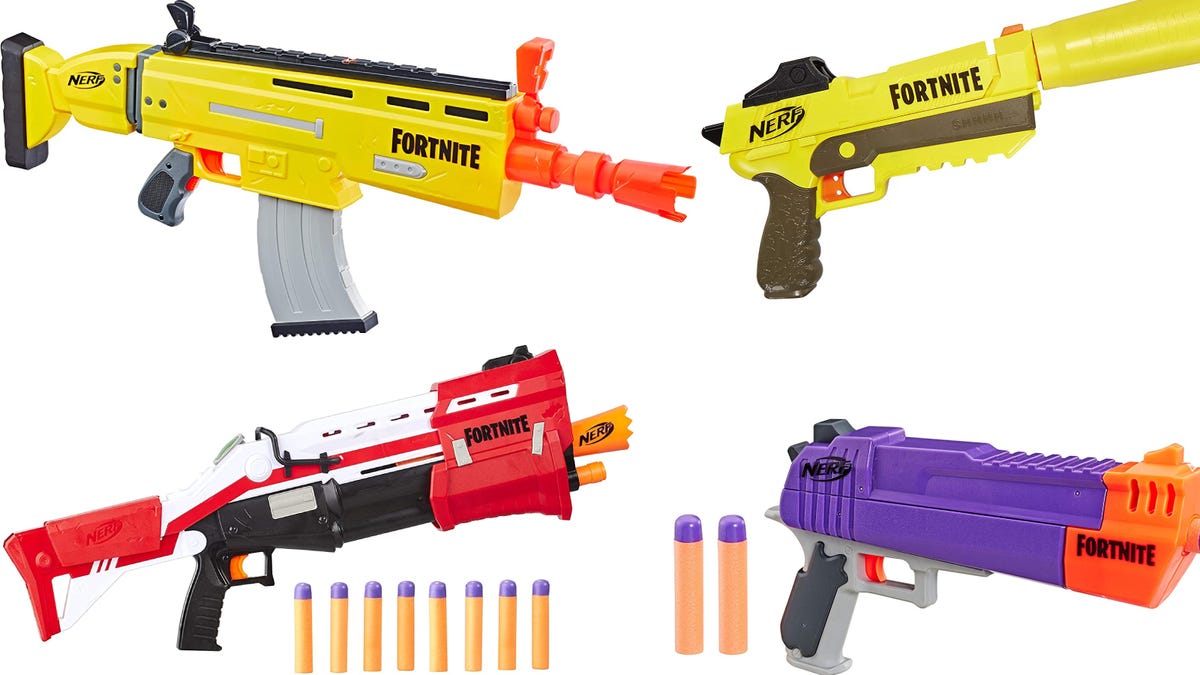 Fortnite gathers thousands of competitive gamers daily, pitting them against each other on an island where the last player standing wins. This Battle Royale game can be incredibly fun and addicting; however, your fun with Fortnite doesn’t have to be restricted to the confines of your screen. Bring the virtual world of Fortnite into real life with Fortnite Nerf guns. These Nerf blasters draw their designs from the game itself. If you’re looking for the best Fortnite Nerf guns, here’s what we recommend for you.

What to Look for in a Fortnite Nerf Blaster

In any Nerf blaster, there are a few factors you should consider if you want to be victorious in your Nerf battle. For one, you should consider the number of darts your blaster can hold at a time. You’ll want to ensure that you have enough ammo to hold off your opponents. After that, you’ll want to consider the distance the blaster can shoot: make sure you can land a shot on your targets from afar. Lastly, consider the blaster’s design. Fortnite blasters in particular are all designed differently, some with unique aspects. Make sure you pick the best Fortnite Nerf blaster for you for your next battle. 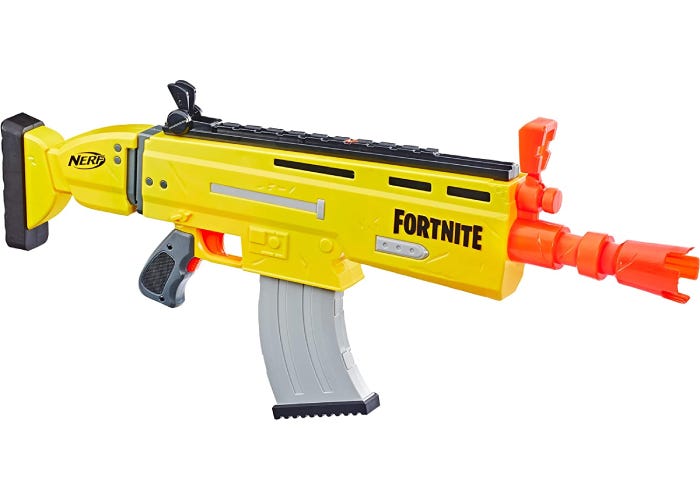 The Nerf Fortnite AR-L Elite Dart Blaster is a solid assault rifle to use in the game and in real life. It is a fully motorized, battery-powered blaster that can shoot ten darts at a time. This blaster comes with 20 Nerf Elite darts total. It’s designed with two flip-up aim-down sights for better accuracy.

This Nerf gun, designed like the assault rifle from Fortnite, is a motorized blaster with a ten-dart magazine. 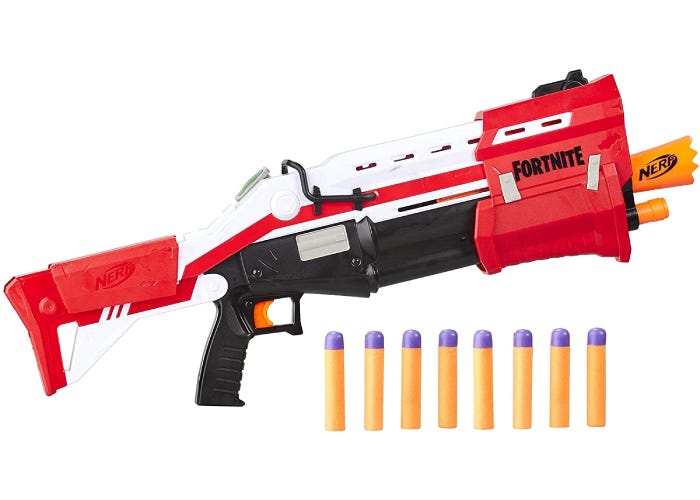 This pump-action blaster, modeled after the tactical shotgun in Fortnite, is a great addition to your Nerf arsenal. This blaster comes with eight Nerf Mega darts, which can be held in the blaster or in the stock. This weapon can fire four darts at a time, which is great for close-quarters combat. This pump blaster does not require any batteries to operate.

This is a pump-action shotgun, like the tactical shotgun from Fortnite. It can blast four Nerf Mega darts at once and can store extra darts in its stock. 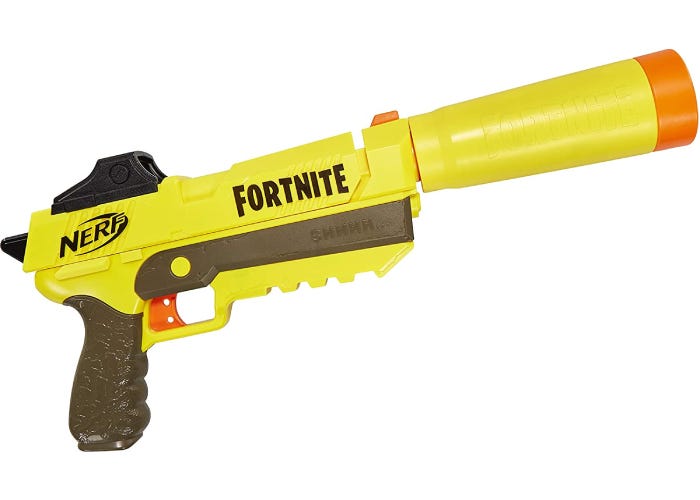 The Nerf Fortnite SP-L Elite Dart Blaster is a model of the supressed pistol from Fortnite. This blaster pistol includes six Nerf Elite darts, three of which can be held in its internal clip at a time. It comes with a front barrel that an be removed for portability. Additionally, this blaster is lightweight and easy to hold, making it great when you need to stay on the move.

This blaster is a lightweight pistol, with an internal three-round clip and detachable barrel. 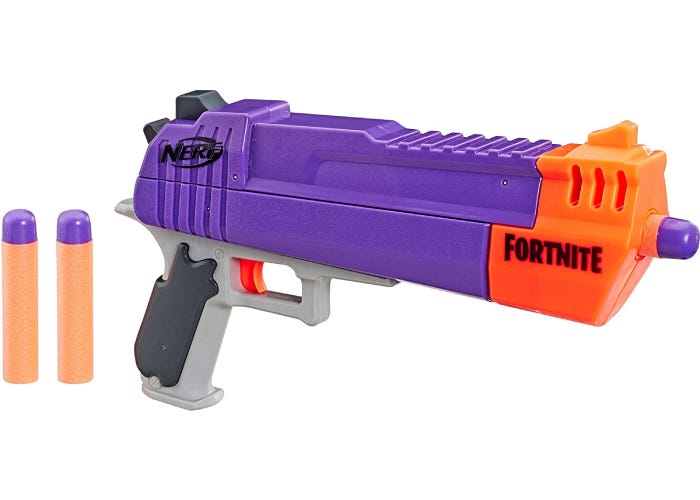 Don’t underestimate the size of Nerf’s Fortnite HC-E blaster, designed like the hand cannon from Fortnite. This compact blaster is a powerful one, much like in the game. This blaster includes three Nerf Mega darts. It is loaded one dart at a time from the front, allowing you to quickly reload and shoot without the hassle of a toy magazine.

This compact blaster, modeled like Fortnite's hand cannon, fires Nerf mega darts which can be loaded from the front. 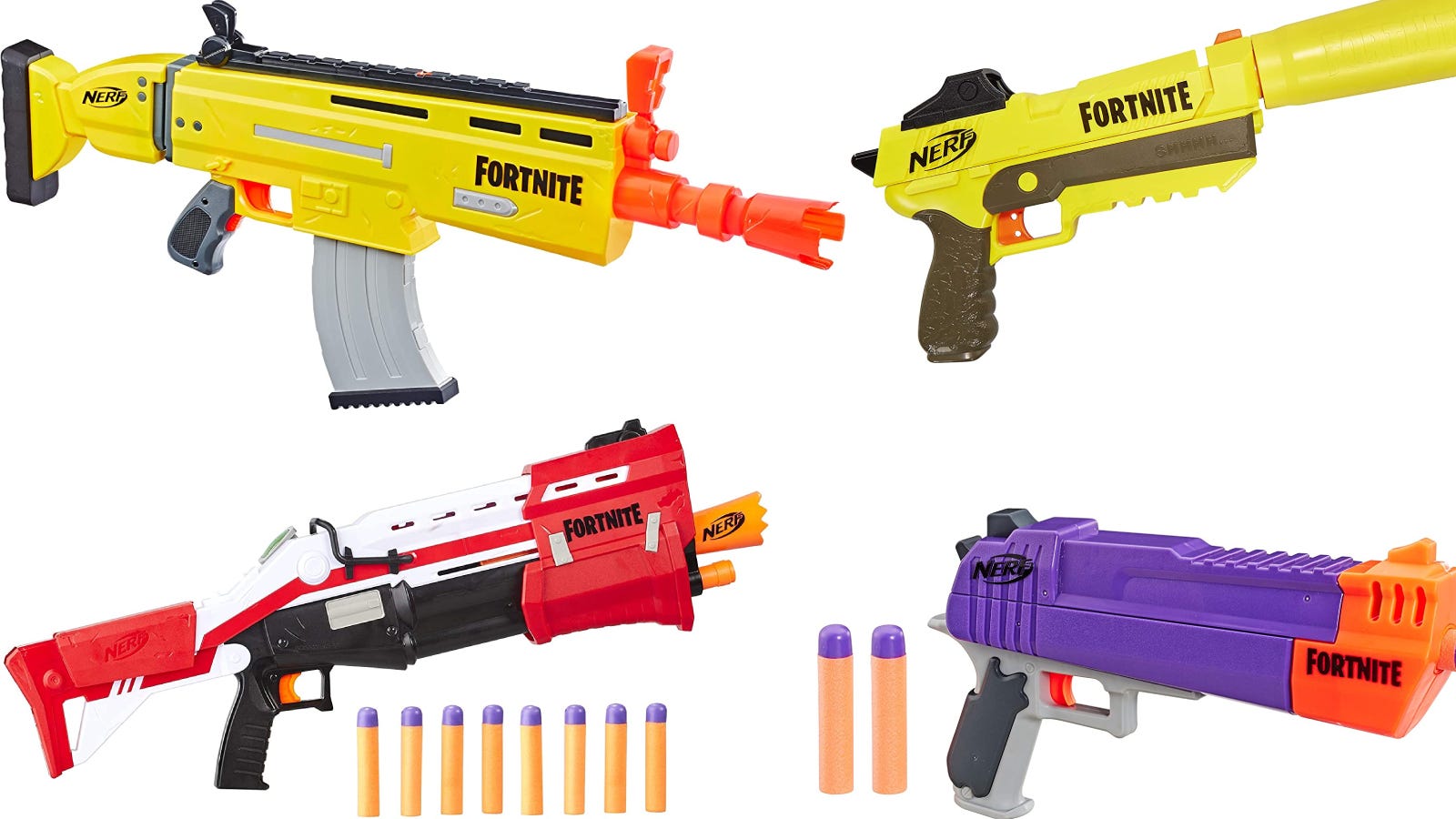