There are plenty of reasons to invest in a kitchen scale. If precision is important to you when it comes to baking and cooking, check out these compact yet effective kitchen scales to complete your kitchen.

Whether you’re on a diet where you need to weigh your food or are very picky about how you make your coffee, a kitchen scale can help you stay on track and even improve your cooking experiences. And in most cases, the digital read-outs and easy interface make them fairly goof-proof and user-friendly. If you’re ready to upgrade your kitchen with a gadget you’ll actually use, these are the best kitchen scales that we recommend.

Why buy a kitchen scale?

There are a variety of reasons why someone would want to purchase a kitchen scale. In particular, many people that are dieting or watching their intake of certain foods use a scale to make sure that they don’t over-indulge. Additionally, many individuals that are serious coffee aficionados opt to grind and weigh their coffee for optimal roasting output. Finally, weighing ingredients for baking instead of using measuring cups can actually be more precise and accurate, so many amateur and professional bakers prefer to use a kitchen scale.

What should you consider when shopping for a kitchen scale?

How can you confirm that your kitchen scale is weighing items accurately?

RELATEDStand Mixer or Hand Mixer: Which Is Best for Baking?

Consider performing the spare change test. Every penny weighs 2.5 grams, according to the United States Mint. If your scale is accurate to the half-gram, placing one penny on the platform should yield a reading of 2.5 grams. For scales that are accurate to the gram, it should read as 3 grams.

Our Picks for the Best Kitchen Scale

A simple stainless steel scale that supports metric and imperial measurements and comes in a range of sizes.

Pros: Whether you’re measuring portions for your keto diet or are trying to ensure that your recipe measurements are accurate, you need a good scale that can easily shift between metric and imperial. This 304 stainless steel scale comes in two sizes with an option for a smart scale. It can weigh 0.18 ounces to 11 pounds and offers a tare function for increased accuracy. Choose from four colors.

Cons: It may not be large enough to accommodate large bowls and containers.

Bottom Line: If you’re just getting into the kitchen scale world, this affordable, entry-level option is a solid choice. With support for both imperial and metric measurements and a tare function, you’ll get a reliable, solid product.

A scale that can handle large batches.

Pros: While not exactly breakout for weight capacity, this Ozeri scale can weigh up to 11.24 pounds or 5,100 grams. With support for both metric and imperial measurements and tare functionality, this sleek little scale features a nice round design and multiple color base options, so it can match a wide range of decor schemes.

Cons: Although this pick has the largest weight support from our selections, the smaller platform might prove challenging depending on the bowl, dish, or food that you’re trying to weigh. Additionally, the scale may not be as responsive as other models, requiring time to accurately update the weight display.

Bottom Line: If you’re looking for a scale with slightly more capacity, then this is a solid option at 11.24 pounds of maximum weighing support. While it’s a sleek little scale, note that the scale may experience delays when updating weights.

Best with a Bowl

A scale that eliminates the need for taring container weights.

Pros: If you’re the type who always forgets to hit tare when you place a container on a scale, you’ll appreciate this option from Etekcity. It comes with a platform that features a removable bowl. While you’ll still have tare support as well as imperial and metric readings, this is a great value-adding feature.

Cons: If you’re looking for extreme precision, this may not be it, as it only weighs to the gram rather than the half-gram. And some users noted that the buttons started to malfunction roughly a year after use.

Bottom Line: Stop forgetting to hit tare to remove container weight with this scale that features a built-in bowl in the platform. With imperial and metric support and a tare function, this is a good kitchen scale.

Pros: Most kitchen scales aren’t intended for liquid exposure. So, this pick that’s not only water resistant (for easy cleaning) but is also USB-rechargeable is an attractive solution for clumsy cooks or anyone who’s tired of buying batteries. You’ll also get standard features like support for metric and imperial measurements as well as a tare option (listed as “zero”).

Cons: The tare and power buttons are combined, which can create problems. Additionally, the weight display may occasionally freeze or be slow to update when new items are added to the platform.

A slim kitchen scale that can be tucked into drawers when not in use.

Pros: No one wants a bulky scale that dominates your kitchen counters and is impossible to move around. This sleek and portable option is available in a wide range of colors, supports tare weight, measures up to 11 pounds, and displays weight in a wide range of imperial and metric measurements.

Cons: Some people may find that this scale is too small, especially if you’re trying to weigh oversized items or place larger dishes and bowls on the platform.

Bottom Line: A sleek design combines with core functionality to create a kitchen scale that’s easy to use, effective, and easily stored away when not in use. If you don’t need to use oversized containers, this scale is a solid pick.

Although not every household will need a kitchen scale, they’re an incredibly useful item for those who need precision when they’re cooking. Whether you’re on a diet or simply need to ensure that you’re measuring ingredients accurately, these kitchen scales can get the job done. 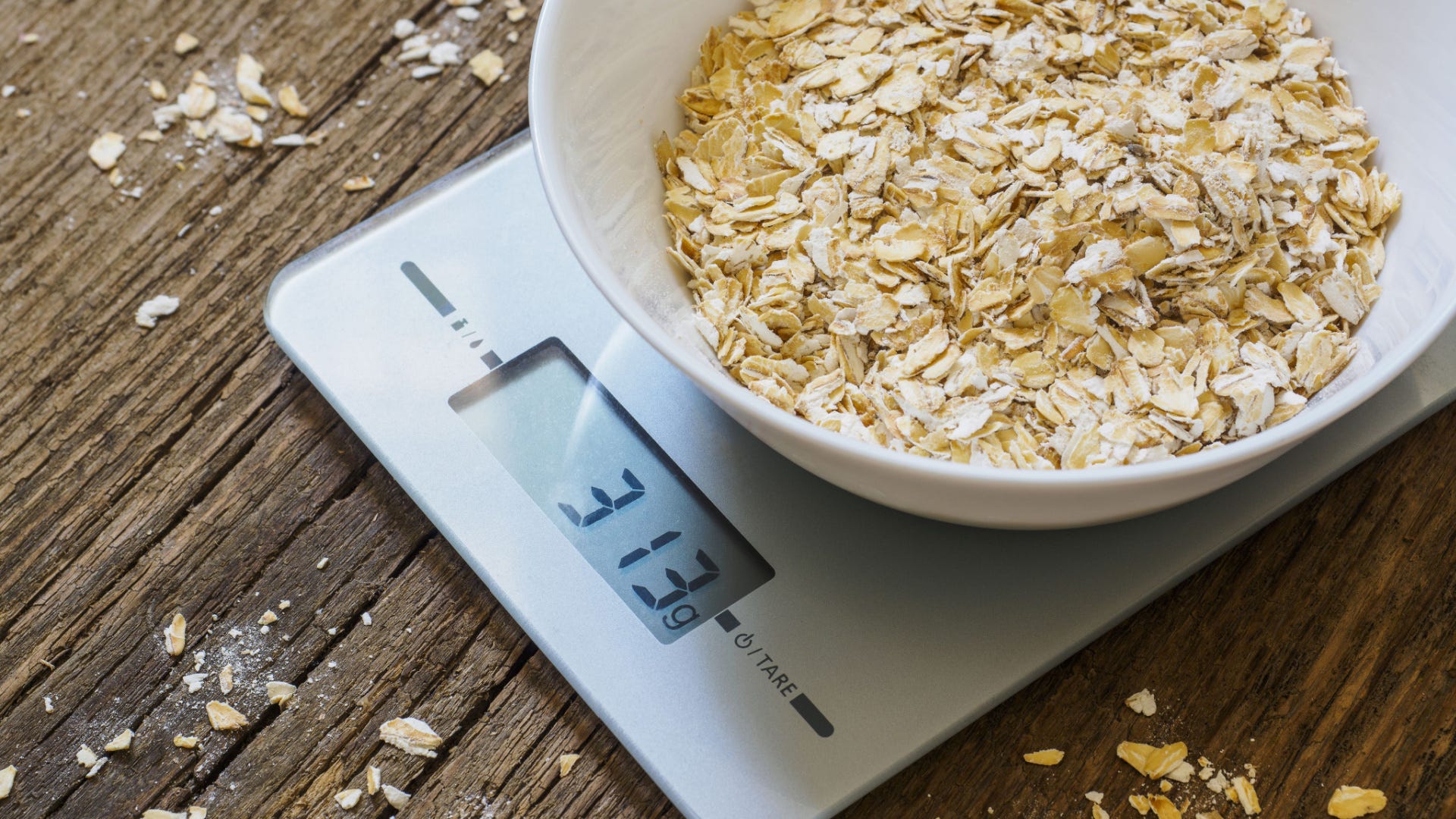 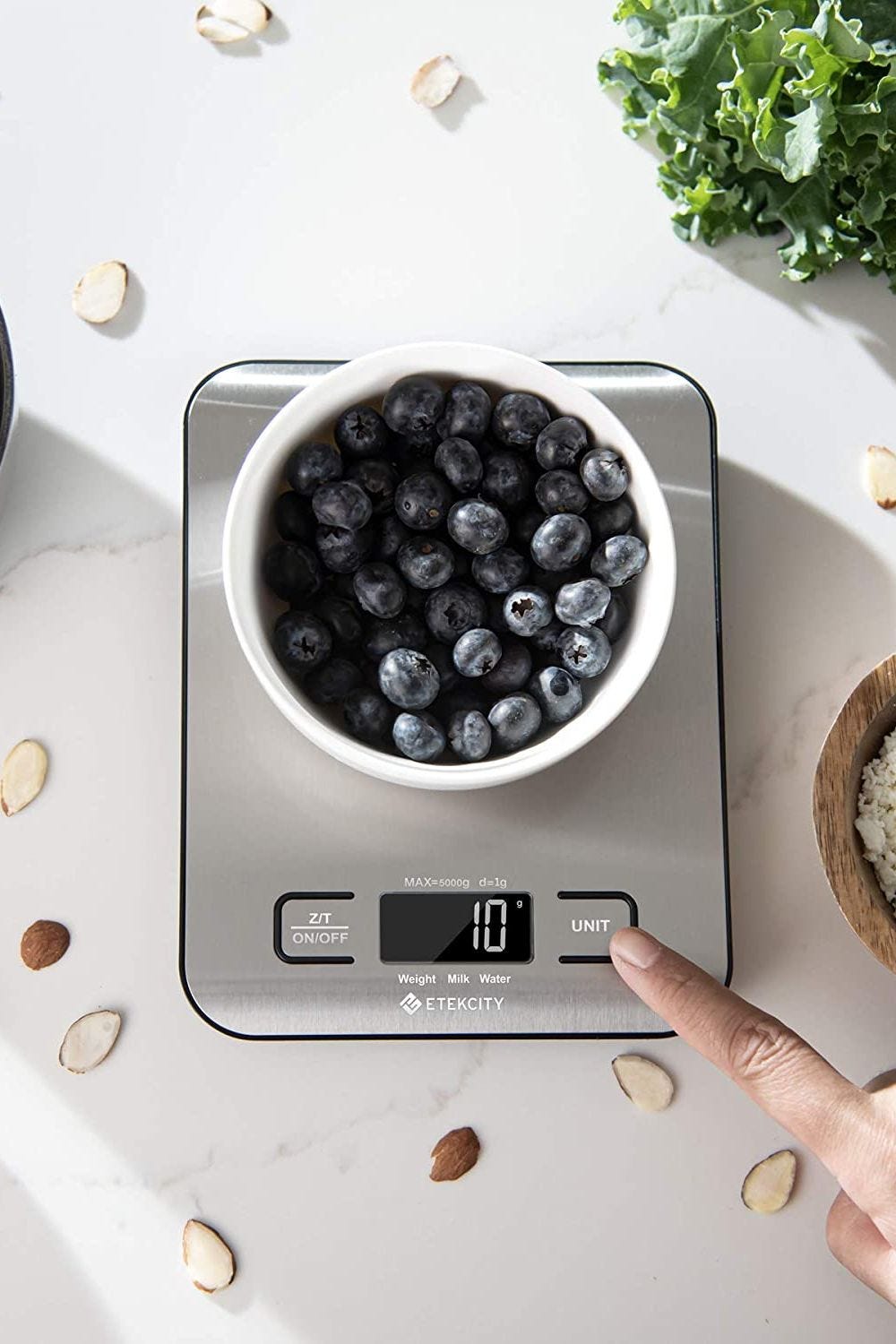