Fans are time-tested cooling devices, and a misting function takes their convenience up several notches to create a cool, breezy atmosphere. Check out these misting fans to keep you comfortable on hot, sunny days.

Why buy a misting fan?

Misting fans bring a unique twist to a fan since they combine it with a water pump. The water is blown through nozzles or some other misting system to create a fog or mist of water droplets along with the usual airflow. This adds an extra cooling factor that’s especially handy in extremely hot environments; at high enough temperatures, fans are only moving hot air around. And the mist created by these fans is so fine that you’ll barely see it. You won’t have to worry about your hair, clothes, or furniture feeling wet or damp.

In addition to the extra cooling benefit they bring, misting fans are quite versatile. You can find models that work either in or out of doors (or both, in some cases), floor versions, mounted versions, and even battery-powered handheld versions that you can carry around for personal use. They’re more energy-efficient than air conditioners and may even work to help purify air to a degree. They’re also great for outdoor environments where an air conditioner can’t be utilized, like a backyard or screened-in porch, or larger scale events like a concert or festival. If you have a greenhouse or garden, a misting fan is also an ideal way to ensure your plants receive enough water to thrive.

What should you look for in a misting fan?

Are there any other factors worth considering in a misting fan?

There are several other useful features and functions to consider while shopping for a misting fan. The fan’s speed, for instance, is worth taking a look at. Most fans, misting fans included, will have at least a low, medium, and high setting. Fan speed is measured in CFM, cubic feet per minute, so the higher the CFM, the more air the fan can quickly circulate. On average, misting fans tend to range from 200 to 5,000 CFM. Anything over 1,000 CFM is probably going to be too strong and loud for indoor use.

Also bear in mind how adjustable the misting fan is. If it’s a freestanding model, you may be able to raise or lower the neck height. Other types may be able to be tilted at various angles or pivoted as needed to change the direction of the airflow. Oscillating fans are the type where the fan head rotates 180 degrees to disperse air and mist more evenly than a concentrated airflow.

Finally, be sure to take into account whether a misting fan is suitable only for indoor use, only for outdoor use, or if it can be shifted between the two. Outdoor-only fans are generally heavier, often made out of metal, and able to withstand the elements. If you have a lighter, more portable misting fan you want to bring outside just for a few hours or an evening, make sure it has a wide, steady base, so it won’t tip over in the wind.

Our Picks for the Most Refreshing Misting Fans

This handy, oscillating misting fan is designed for almost any indoor or outdoor space.

Pros: One nice thing about wall-mounted fans is that you can install them almost anywhere. This misting fan version is no exception, especially since it’s made of sturdy steel and aluminum, and it’s suitable for both indoor and outdoor use. The fan’s head oscillates and promotes airflow in up to a 1,000-square foot area, so it can cool down even large and/or outdoor spaces.

Cons: It’s an expensive purchase, especially since you’ll have to install it yourself near an electrical outlet in order to function.

Bottom Line: Wall-mounted fans are a great way to permanently install a fan in places where a fan might be a useful addition but normally can’t be placed. If you want to mount a misting fan in your home or business, you can’t go wrong with this far-reaching, oscillating model.

If you're worried about your child overheating at school, during a sporting event, or at the beach, this inexpensive handheld misting fan is the perfect solution.

Pros: If you’re looking for a handheld misting fan to give your child for a trip to the beach or a day at the amusement park, you can’t go wrong with this battery-powered model. Kids will love its bright plastic body, and the transparency of said plastic makes it easy to note when the 9-ounce tank needs refilling. This misting fan is inexpensive and highly portable with soft, finger-safe blades.

Cons: Unlike most fans, this model doesn’t have multiple speed settings; there’s only one speed option. The lightweight plastic body also isn’t especially durable, so emphasize to your child to handle it with care.

Bottom Line: Most parents can tell you how cranky and miserable children can become when they’re feeling overheated. This portable little misting fan is the perfect way to avoid these scenarios since it can be brought along pretty much anywhere, and the blades are gentle and safe for even young children to use.

This adjustable, utility-style misting fan is great for outdoor spaces and is easier to transport than most heavy-duty outdoor models.

Pros: There’s a lot to love about this compact yet heavy-duty utility-style misting fan. Its smaller size, relatively lighter weight, and built-in carrying handle make it much more portable than many outdoor misting fans. But don’t let its compact size fool you. This fan is heavy-duty and powerful, with a 600 CFM that will cool down all sorts of outdoor spaces in even the hottest climates. It’s also quite customizable, with three speeds and rotation up to 135 degrees, so you can direct the airflow as you please.

Cons: While this misting fan is ideal for outdoor spaces, it’s too strong and powerful for indoor use. Bear in mind that since it needs to be plugged in and attached to an external water source, this does limit where you can place it; both the power cord and hose are about 7 feet long, so you’ll have to find both an electrical outlet and water source within that range or use an extension cord.

Bottom Line: Misting fans aren’t only useful for indoor spaces or personal, handheld use. If you live in a hot climate and a have a patio, balcony, or screened-in porch, or if you grow plants in an outdoor garden or greenhouse, this misting fan is a perfect way to enjoy your outdoor space in hotter weather and ensure that your plants stay cool and moist in extreme heat.

A freestanding misting fan with a unique, vintage-style look.

Pros: This is a classic tall fan with a misting system as an added twist. It has the classic speed settings, it oscillates to better distribute airflow, and the neck is height adjustable. However, unlike a lot of tall standing misting fans, this one is suitable for both outdoor and indoor use. The body of the fan is anti-rust and UV-resistant, and the paint is all-weather, so it can withstand the elements. The heavy, wide base also helps it remain upright even in less than ideal weather conditions.

Cons: This fan is pricey. The misting system, due to its ability to be removed and reattached, may leak water onto your porch or floors. And some users found that the mist wasn’t as fine as they liked and made them feel wet.

Bottom Line: Floor fans are a staple piece of functional decor in many households, and this model comes with a misting system that you can attach or remove at will. And, unlike a lot of fans, this one has a unique look that will better suit vintage or classical style homes.

Small enough to slip into your pocket, this is the perfect misting fan to bring on the go for any time you're feeling overheated.

Pros: You’ll be able to slide this little misting fan into your pocket or purse and take it along with you pretty much anywhere you want to go. It can expand and fold up as needed, and there’s even a built-in base that allows you to prop it upright if desired. Unlike some handheld misting fans, this one has three speeds. It provides an airflow reaching up to 6 feet and features a USB-rechargeable battery.

Cons: This misting fan has a small water tank to match its small size; it’s a mere 0.5 ounces, so you will have to refill it often when using the misting feature. Also note that while this fan offers quite good battery life—20 hours on low, 13 hours on medium, and 6 hours on high—the misting feature won’t last nearly as long. It can only run about an hour or hour and a half while misting.

Bottom Line: Portable, handheld misting fans are incredibly useful little devices. Whether your workplace or school keeps the heat blasting too high, you’re hiking on a hot day, or you’re worried about sweating your makeup off, this little fan is perfectly equipped to cool you down.

If you live in an extremely hot, dry climate or if your current home doesn’t have an air conditioner installed, a misting fan can be an absolutely worthwhile investment for staying cool and refreshed during the hot months. These models can help. 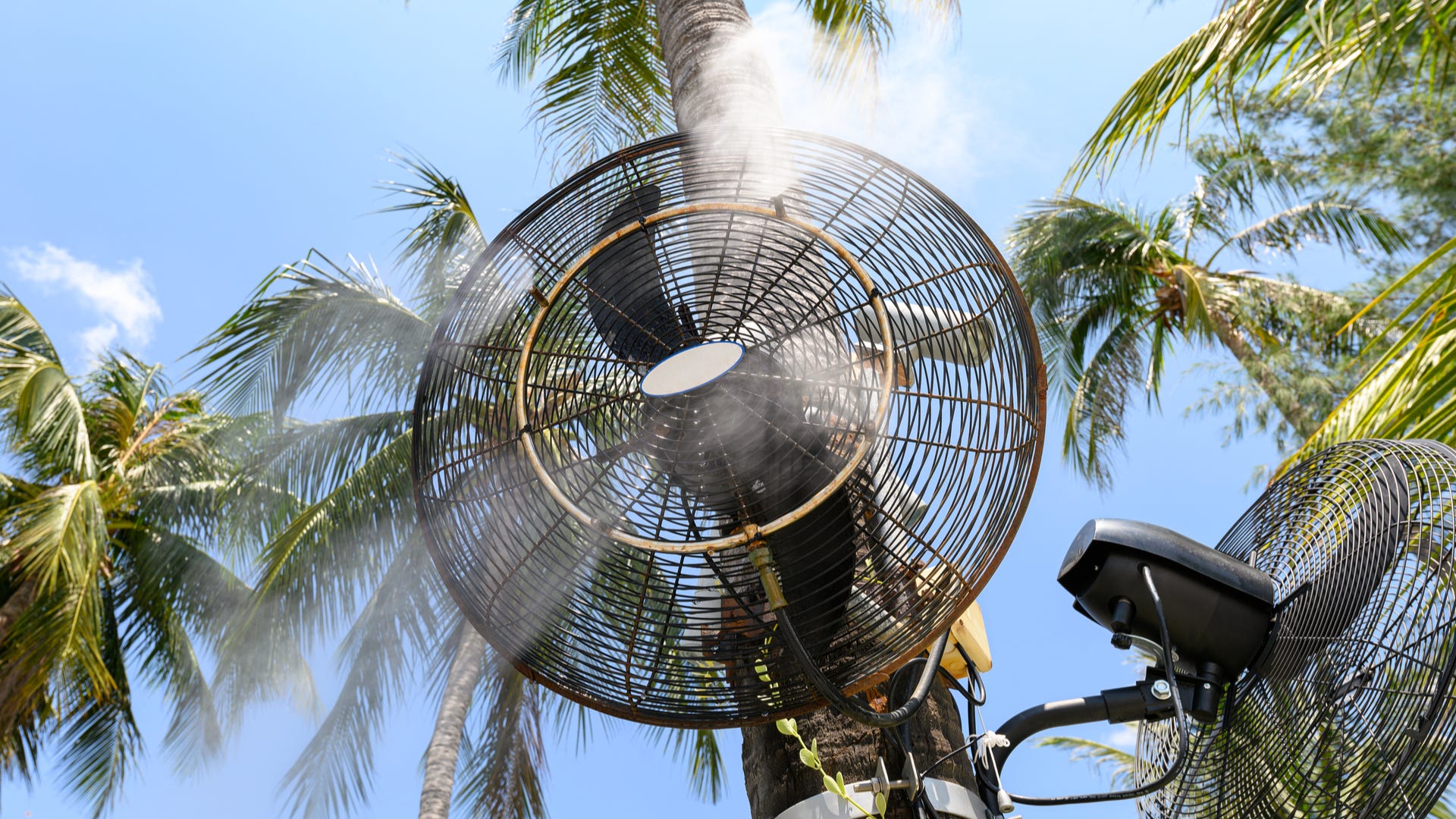 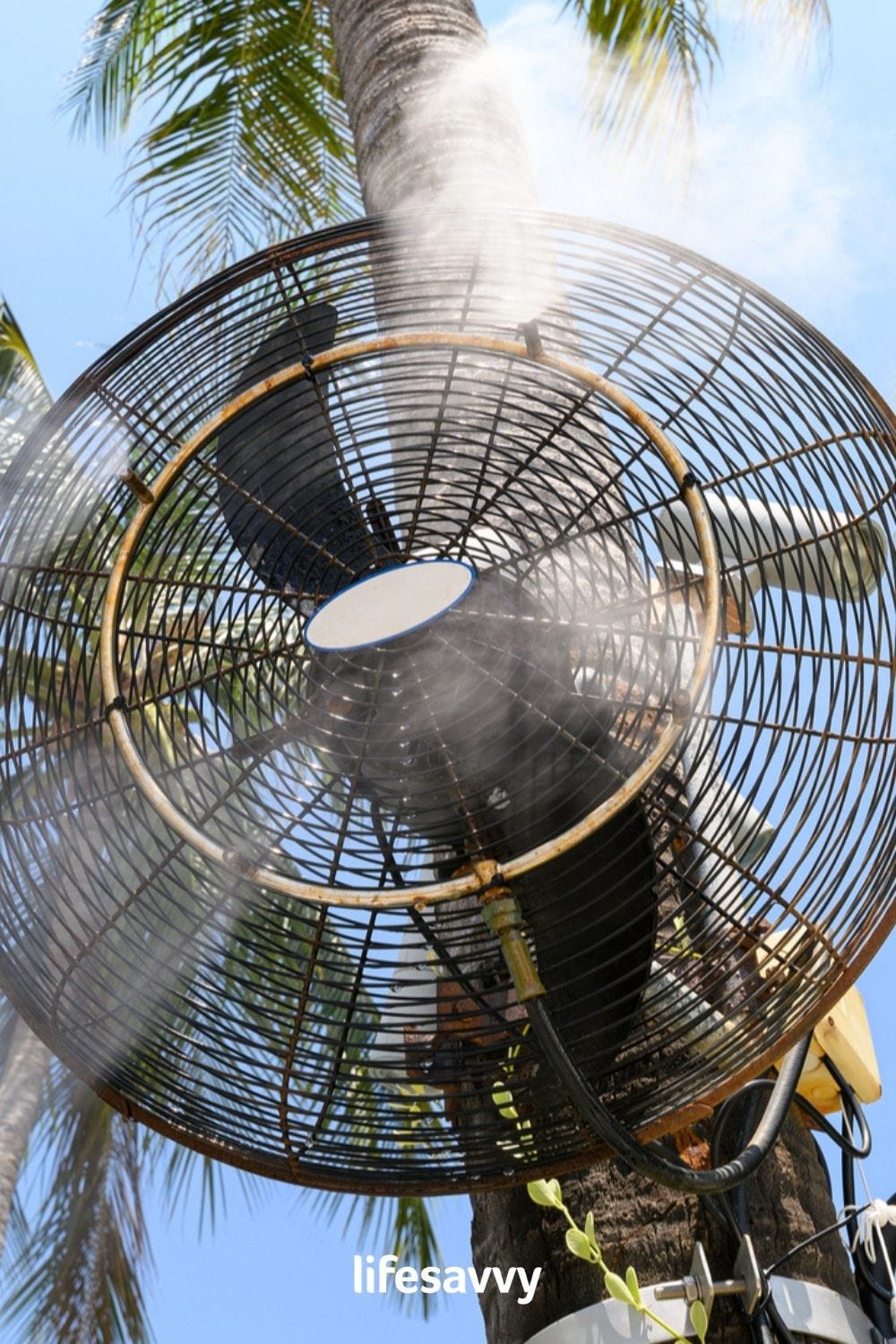