Whether you’re planning an epic firefight or spreading that tradition to your kid, Nerf Guns are a safe way to have fun pretending you’re in an action movie. Nerf has a ton of creative foam-blasters that will give you the edge on your competition.

What Makes a Nerf Gun Great?

There are a lot of factors that go into making a good Nerf Gun. Firing distance is one of the most important things to consider when looking at blasters; you’re going to want your darts to make it all the way to your opponent. After firing distance, accuracy is the next important thing. If you can’t hit your target from far away, it doesn’t matter at all that it at least went the distance.

The last big thing to consider is ammunition capacity and rate of fire. There are Nerf guns designed for every type of combat: quick-draw single-fire, long-distance sniping, and rapid-fire blasting. Choose your weapon carefully.

The Nerf N-Strike NanoFire is a good blaster for someone’s first Nerf weapon. It is compact and easy to use; it also has a surprising amount of power for its size, being able to shoot between 30 and 90 feet. It only shoots one dart at a time and only comes with three darts though, so it isn’t going to hold the fort down if you’re under heavy fire. All-in-all its a great beginner option, especially for children.

The Nerf N-Strike NanoFire is a compact but powerful single shot blaster that comes with three Nerf darts.

If you want to overwhelm your opponents with speed and power, the Nemesis MXVII-10K is a fully motorized blaster equipped with a 100 round hopper. The hopper feeds the high-impact rounds into the motorized firing mechanism that launches the rounds at a whopping 100 feet per second. The gun can either be powered by six D batteries of the Nerf Rival Rechargeable Pack.

This gun is great for teens and adults who want to elevate the stakes of their Nerf battles, but it’s not recommended for children as it’s very powerful and the rounds are more of a choking hazard than regular Nerf darts.

The Nemesis MXVII-10K is a force to be reckoned with. It can hold 100 high-impact rounds and has fully motorized blasting, just pull the trigger.

Sometimes it’s better to stand back and take your time fighting from afar instead of trying to Rambo your way through enemy crossfire. The Nerf N-Strike AccuStrike FalconFire is one of Nerf’s most accurate blasters, which will give you the advantage over long distances. It’s a top-loaded sing-fire blaster, but the power and accuracy behind its darts make up for the slow reload time. This blaster can hold two extra darts under the barrel and comes with ten darts total.

The Nerf N-Strike AccuStrike FalconFire is one of the most accurate Nerf guns which gives you the advantage in long-range firefights.

There is a large community around modded Nerf guns. As with any mod, we advise you to take the necessary precautions, but if you want to get into the hobby the Nerf N-Strike Maverick Rev-6 is a classic blaster with an extensive history in the modding community. The Maverick is a revolver-style blaster that holds six darts which gives you rapid-fire shooting abilities and is a solid weapon in any situation.

The Maverick is a classic which makes it great for modding, but it hasn’t been worked on by Nerf in a while. If you like the style of the Maverick, but you want a more updated version, Nerf has redesigned the Maverick as the new N-Strike Elite Strongarm, a sleeker and more powerful blaster.

The Nerf N-Strike Maverick Rev-6 is a classic blaster with an extensive modding community. It's great for anyone looking to take their Nerf game to the crazy-scientist level.

Amazon
READ NEXT
Recently Popular
LifeSavvy is focused on a single goal: helping you make the most informed purchases possible. Want to know more? 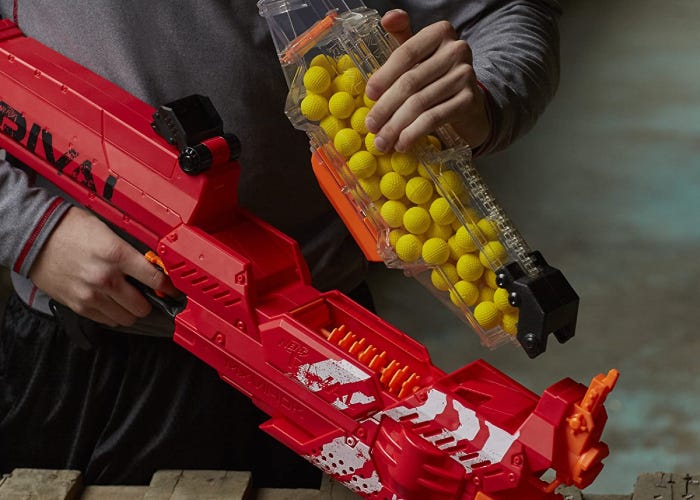