Since its first release as a video game in 1996, Pokemon has evolved from a simple Gameboy game cartridge to a dominant media franchise. From valuable trading card collectibles and merchandise, popular television shows and movies, and spin-off video games deviating from the core series, Pokemon has undoubtedly grown into a worldwide sensation, amassing millions of fans and becoming an integral part of contemporary pop culture.

Pokemon’s main premise is about a player who takes the role of a Pokemon trainer. In a world of several fictional monsters called Pokemon, all with unique characteristics and attributes, trainers will capture Pokemon and ready them for battle against other trainers with Pokemon of their own. These Pokemon will aid the player in becoming an elite Pokemon trainer, either by “catching them all” or by becoming the strongest battler. If you know someone who’s eager to immerse themselves in this world, keep reading for our round-up of some of the best gifts for any Pokemon fan.

What to Look for in a Pokemon Gift

When shopping for the perfect Pokemon product, consider these factors:

If you are interested in learning how to play Pokemon’s trading card game, here’s an excellent beginner set to get you started as soon as possible. This trainer kit features seventh-generation Pokemon Lycanroc and Alolan Raichu in two 30-card decks, each with a special foil card included. The kit also comes with an instruction booklet, teaching you step-by-step the rules of the game. Additionally, the set comes with a two-player playmat, damage counters and special condition markers, a game coin, and a detailed deck box for card storage.

This set offers everything you need to get started, including two decks, a playmat, game accessories, and a step-by-step instruction booklet.

The eighth-generation core series title, Pokemon Sword and Shield explores the Galar region, a new world with 89 new Pokemon along with hundreds of pre-existing ones as well. The Galar region hosts a number of various settings, from countrysides, cities, forests, and mountains. Your goal in Sword and Shield is to become the region’s champion, much like traditional gameplay seen in previous titles. However, the game also offers various never-before-seen gameplay features, such as Dynamaxing and Gigantamaxing your Pokemon in battle and the Wild Area — an open-world environment home to a variety of Pokemon and open to co-operative online raid battles.

This is a loveable plushie toy of the face of the Pokemon franchise: Pikachu. This 8-inch model of your favorite yellow friend is incredibly soft to the touch and is a great stuffed toy to cuddle with. Rest assured, this Pikachu won’t electrocute you.

This 8-inch plush toy of Pikachu is a great companion for Pokemon-loving kids.

Here’s an 8-pack of Pokemon action figures for you or your children. It includes Pikachu, Bulbasaur, Squirtle, Charmander, Meowth, Jigglypuff, Psyduck, and Loudred. Meowth and Loudred are 3-inch action figures, while the rest are 2 inches tall. Each figure has high-quality detail and is posed in an action position that encourages play.

This is a set of eight Pokemon action figures to assist you in any battle.

These movies are great for entertaining your young ones. These are the first three Pokemon movies in DVD format. All three movies feature the same protagonist, Ash, a trainer whose goal is to become the world’s greatest Pokemon trainer. The DVDs feature 16 by 9 widescreen capabilities, English audio, and SDH subtitles.

Witness the first three Pokemon films in this movie set. 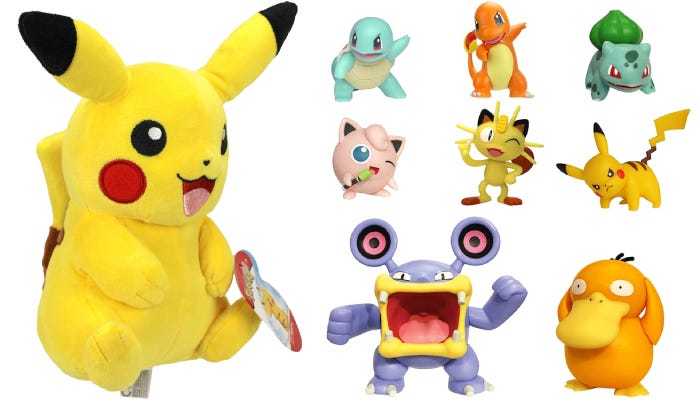