Blu-ray players are great for bringing the movie theater experience in your home. But if you aren’t at home, you’ll need to bring the movie theater along with you. Portable Blu-ray players are compact players that allow you to take your movies wherever you go. They most often come with an integrated screen and sound system, so you can enjoy the video without a display.

Here’s what we recommend.

What to Look for in a Portable Blu-Ray Player

As a portable Blu-ray player, you should look for players that are compact and relatively easy to carry around with you. If you expect to be away from a TV or display, look for portable Blu-ray players that come with their own screen and sound system. You’ll want to have quality audio and video, so look for players with high-resolution displays and a good sound system. Lastly, you should consider its ports, as you may want to connect to a larger screen.

This portable Blu-ray player from NAVISKAUTO comes with a built-in video and audio system. Its screen is 14″, and can play HD video at 1080P. This player has a Dolby Digital Sound system, which sound mirrors that of a real movie theater. In addition, this player can connect to another display via HDMI.

This portable blu-ray player comes with a high-quality built-in screen and sound system.

This portable Blu-ray player is a great low-cost choice for you. It comes with a 13.3″ display, capable of producing HD video at 1080P. The screen can spin for an adjustable viewing angle. It comes with a stereo sound system and a rechargeable battery for repeated use. In addition, this Blu-ray player can synchronize and connect to any display via HDMI.

This portable Blu-ray player comes with a 13.3-inch display, stereo sound system, and HDMI compatibility, all at a low cost.

If you have an existing TV or display with you, this is a viable option for you. It’s a compact version of the traditional Blu-ray player, sized at 5.2″. This player allows you to read and write over BDXL discs, and comes with different modes to optimize playback. It’s capable of handling standard, 3D, and HD Blu-ray titles.

This compact Blu-ray player is perfect for those with an existing display. It's 5.2 inches long and wide.

This Blu-ray player has a 12″ display, with a Dolby Digital Sound audio system. This player comes with a variety of connectivity options, such as AV and HDMI cables. It can be charged via its wall charger or its cigarette adapter in your car.

This portable Blu-ray player comes with a 12-inch display and Dolby Digital Sound. 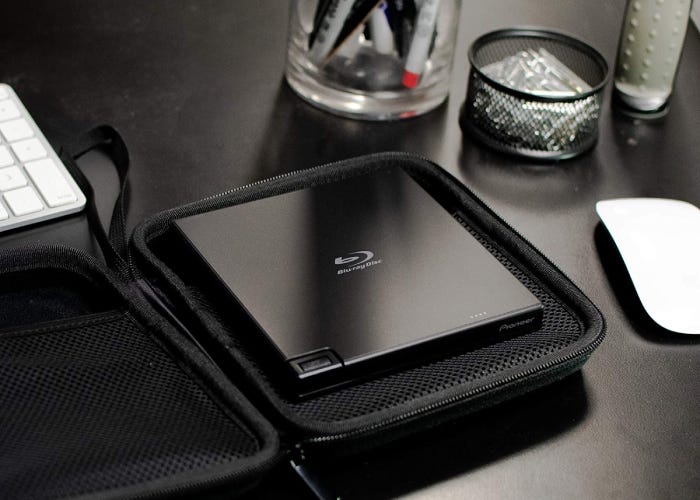