If your town gets a lot of snow, you understand how difficult it can be to go somewhere after a snowstorm. Owning a snow thrower allows you to handle those mounds of snow without breaking a sweat.

Snow throwers are incredibly handy for removing heavy snow from your driveway or sidewalk. They’re efficient, easy to use, and hassle-free. Snow shouldn’t get in the way of living your life, so pick up a snow thrower to minimize the effects of those potentially brutal snowy months.

Why buy a snow thrower?

Snow throwers are much more efficient and cause less strain on your body than traditional snow shovels, especially when it comes to removing heavy snow after a severe storm. You don’t have to bend and lift snow as you do with a shovel, and snow throwers typically cost a little less than snow blowers. You can use snow throwers to simply the process of removing snow that collects on your driveways, sidewalks, pool decks, or patios. Plus, they’ll get it done in very little time, so you can carry on with your day.

What should you look for in snow throwers?

What’s the difference between a snow thrower and a snow blower?

Believe it or not, some people who grow up in the snowiest areas in the country are unaware of the difference between a snow thrower and a snow blower. Thus, before you shop for a snow-removal solution, it’s a good idea to learn about what separates snow blowers from snow throwers.

Thankfully, the difference is simple. Snow throwers are single-stage machines that use one continuous motion to “throw” snow out of their path. On the other hand, snow blowers use a multi-stage design to first scoop up snow, then blast it out of its path using entirely separate mechanisms. As such, snow blowers are often a better heavy-duty solution as they can blast snow further and scoop up deeper snow than your average snow thrower. However, in terms of convenience, affordability, and simplicity, snow throwers are still an excellent option for those who rarely get over a foot of snow at a time.

Our Picks for the Best Snow Throwers

Pros: This snow thrower has a simple yet dynamic design that allows you to remove snow from small to mid-sized driveways as well as sidewalks and walkways. It comes with a 15-amp motor, providing you with enough power to clear away over 700 pounds of snow per minute. The steel auger features two rubber blades that will eat away at snow no matter the composition or density. This model also scores points for its rugged design, as it requires very little maintenance to operate at its best.

Cons: You will need to plug this snow thrower into a power outlet to operate it. This means you will likely have to use an extension cord if you have a long driveway, and that can be fairly treacherous when working on an icy ground

Bottom Line: This electric snow thrower provides you with the power and versatility to keep your property clear of snow. However, its corded design won’t appeal to everyone. Regardless, it offers stellar performance and snow-removing power for its asking price.

An affordable snow thrower that will get the job done.

Pros: What makes this snow thrower unique? It’s super affordable, can remove over 500 pounds of snow per minute, and its small form makes it easy to store and maneuver. While it’s not the most powerful option on the market, it’s tailor-made for small driveways and regions with manageable snowfall. It also comes with an adjustable chute that makes it easy to control the height and direction of your snow stream.

Cons: In terms of power and efficiency, there are better options available for those who live in areas that get a lot of snow accumulation. This snow thrower is on the smaller side and doesn’t have as many bells and whistles as other models.

Bottom Line: This snow thrower conveniently works on sidewalks, outdoor patios, and pool decks. If you’re looking for a budget-friendly option that’ll still get the job done, this is probably the snow thrower for you if you’re not afraid of slipping over a power cord and busting your butt.

This battery-powered snow thrower will allow for easy maneuvering.

Pros: This battery-powered snow thrower features a rotating, multi-directional chute as well as an LED light display for nighttime use. It has a continuous runtime of 45 minutes, and it can get a lot done in those 45 minutes! It clears a path 20 inches wide and 10 inches deep at a time, ensuring that by the time you’re done, you’ll easily be able to access your garage, front door, or car.

Cons: Sometimes, the battery won’t start when it gets too cold, which will require you to remove it and warm it for about 10 minutes before putting it back in to use the machine. Speaking of batteries, one isn’t included with this product and will have to be factored into the price.

Bottom Line: This unique and innovative snow thrower has some nice features. Because it’s battery-powered, you won’t have an electric cord to worry about while you move it along. It’s on the expensive side, but you stand to save money on gas if it’s always snowing where you live.

Pros: This heavy-duty snow thrower has a gas-powered motor that puts most electric and battery-powered models to shame. It can throw snow up to 40 feet and has nearly twice the clearing depth of other top models. Unlike many snow throwers, it’s designed to easily handle snow accumulations of over a foot, so it’s a great choice for cold locations that routinely deal with extreme winter weather.

Cons: At this snow thrower’s price, many people will consider whether or not they should invest in a snow blower instead. Also, since it’s gas-powered, you’ll have to factor in the cost of keeping its tank filled.

Bottom Line: This snow thrower is incredibly reliable because it offers you plenty of versatility and the right amount of power to deal with unforgiving winter storms. While it can be a little tricky to maneuver due to its heavy design, the added efficiency makes clearing snow much less exerting than most budget models.

This lightweight snow thrower takes the physical effort out of shoveling your driveway.

Pros: If your sidewalk or driveway is hardly large enough to justify an expensive snow thrower purchase, this electric snow shovel model might be what you’re looking for. It’s quiet, battery-powered, and won’t require any routine tune-ups. Additionally, its throwing distance of up to 25 feet actually outperforms many other snow throwers. Factor in its lightweight design and quiet operating volume, and you have a stellar option for areas that get limited snowfall.

Cons: If you’re needing to clear snow from a blizzard, this product’s limited battery life and minimal clearance height will leave you wishing you invested in a heavy-duty snow thrower. However, it’s a great tool for areas that occasionally get light snowfall.

Bottom Line: This product makes clearing snow incredibly easy when compared to a conventional snow shovel, as it eliminates the need to manually throw the snow. While it’s not a heavy-duty tool, its quality construction and lightweight design solidify it as a wise purchase for many homeowners.

We have to keep our driveways and sidewalks clear of snow if we want to be able to get in and out of our homes and cars during the snowy months. A snow thrower will help you remove large amounts of snow without having to overexert yourself so you can go about your normal life without disruption all winter long. 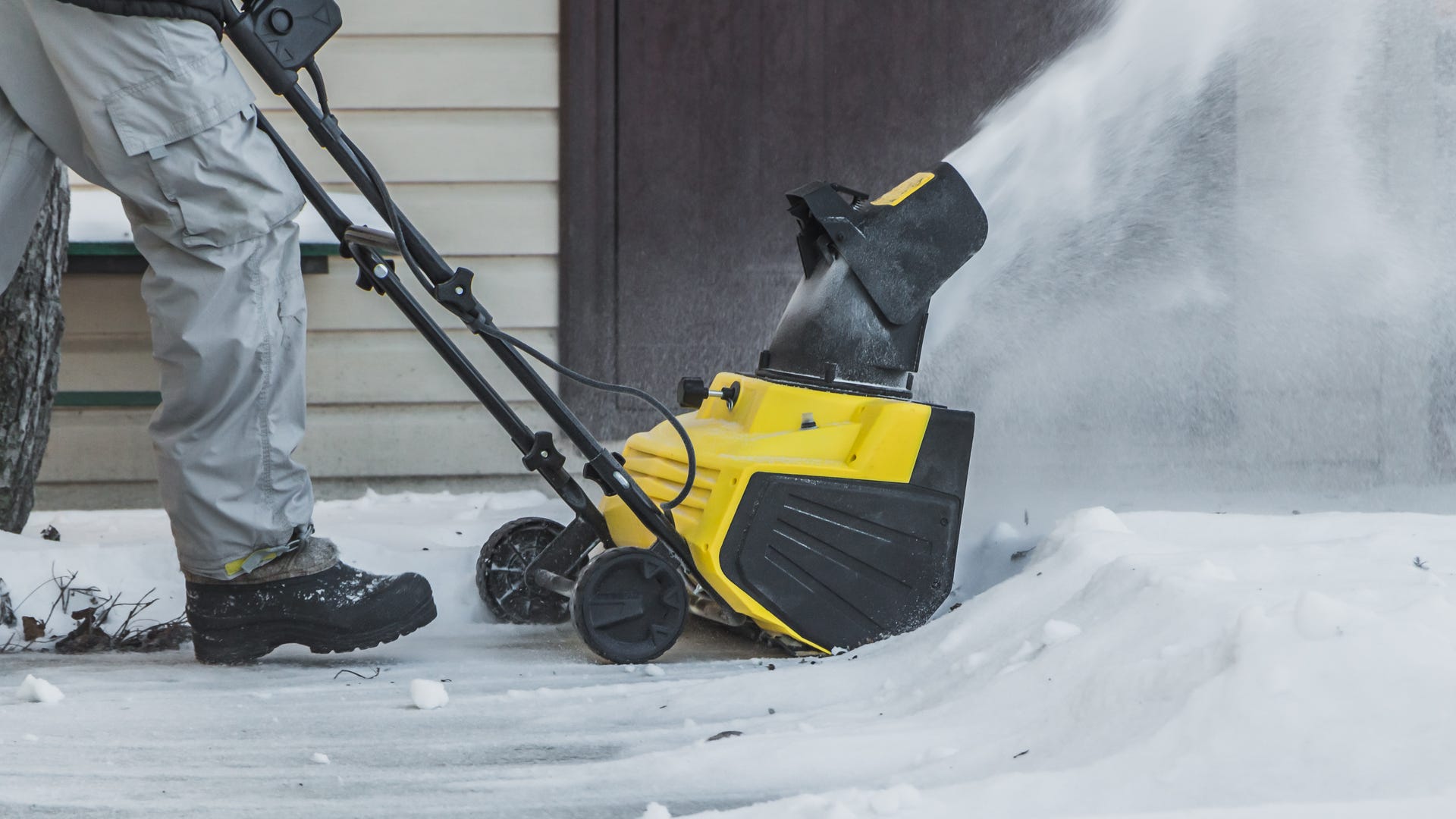 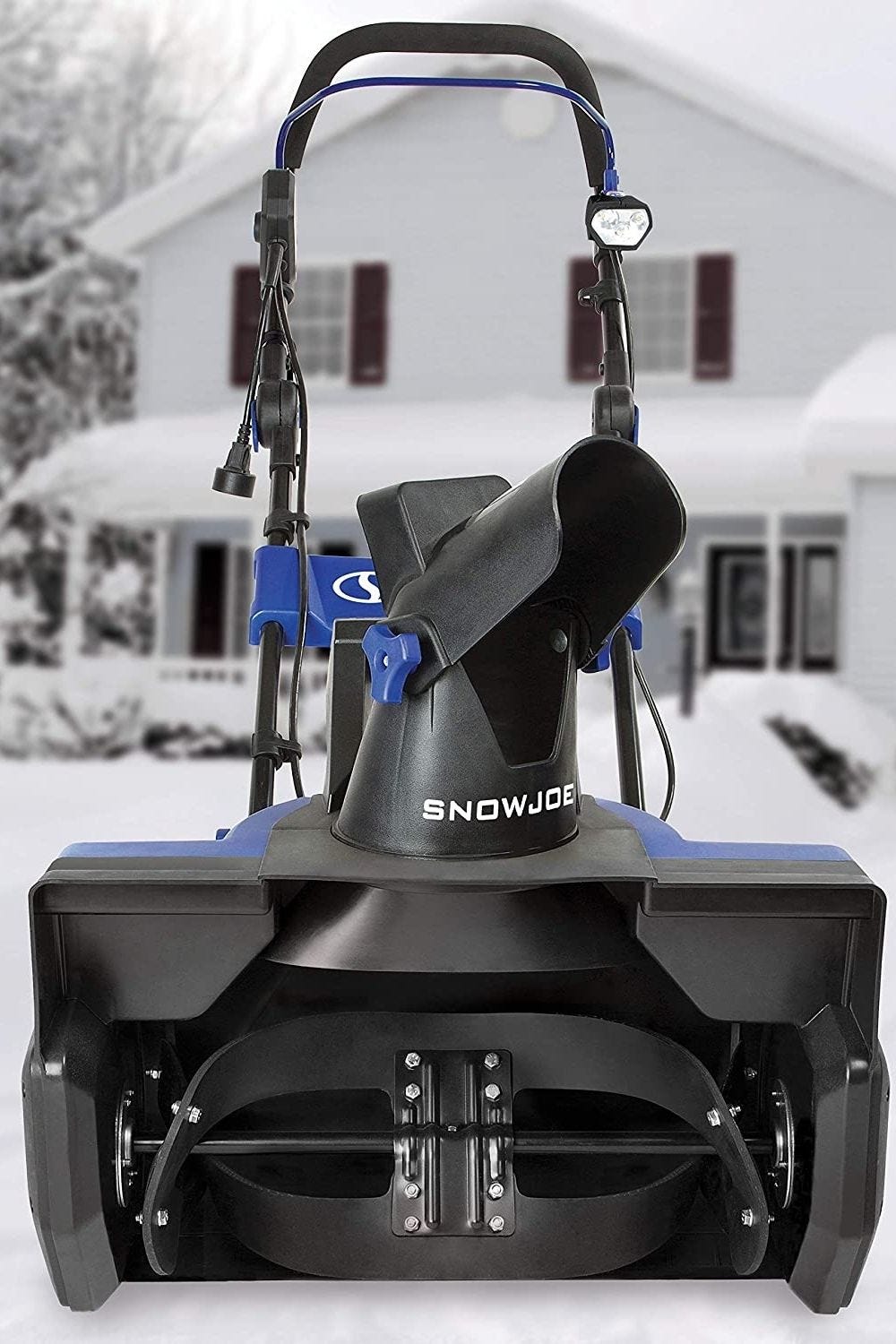