James Bond, Jack Ryan, Dana Scully, Napoleon Solo, Austin Powers—alright, maybe not the last guy, but kids grow up madly loving an assortment of spies across film and television that it really should come as no surprise how often they’re pretending to be one. From retrieving a highly guarded artifact from the bedsheet fort to eavesdropping on an older sibling’s phone call, there’s a spy in almost every kid, so here are a few espionage kits you can buy to get them started.

What You Want Out of Your Ace Hound Gear

Possibly the most thorough spy gear bundle you’re likely to come across, this Thames & Kosmos Master Detective Toolkit teaches users about the same forensic science the real gumshoes use. With this kit, one will learn how to gather evidence, find the leads, and solve the backyard crime of the century. The MOCK crime within contains a 48-page, full-color guidebook with step-by-step instructions, as well as 33 investigative tools and 26 experiments to choose from.

This detective kit is highly extensive, including 33 investigation tools and 26 mysteries to solve.

Have a spy in your life who is more interested in the hidden abilities of field tech rather than lab work? This Spy School Sneaky Surveillance kit provides a user with a handful of cool tools that will always keep your surroundings in check. Included in the kit are your essentials: a working microphone, rearview spy glasses, and two kinds of scopes. The best part? Each piece of spy gear is designed to look like an everyday piece of equipment, from a yo-yo to a pencil box.

For the spy kid who wants to really feel the pressure of living like the world’s greatest infiltrator, this SpyX Lazer Trap Alarm features a three-piece “lazer” beam trap that a user can set up in any way and around any item worth getting into trouble for. The trio is adjustable up to 360 degrees, providing a full spectrum intensity as one carefully avoids triggering the light or audio motion alarm. Each “lazer” sensor is detectable between 4 feet of distance, so you can customize with ease.

The ideal choice for junior secret agents, this trio of laser sensors creates the perfect trap to crack.

Another mystery-based bundle that puts you in the investigator’s shoes, this Scientific Explorer Crime Catchers Kit provides an educational and safe foray into the behind-the-scenes work. A kid can solve two different mysteries and complete eight activities by way of matching fingerprints, testing powders and liquids, and decoding secret messages just like the pros. Included in this kit are the likes of an activity booklet, suspect cards, various powders, decoder glasses, and test tubes.

A two-mystery activity kit that kids can solve via matching fingerprints, testing powders, and decoding the truth.

For users who know they have the skillset but haven’t quite found their signature look, this Tigerdoe Detective Costume features a true spy staple alongside several modern accessories. The pinstripe, black and white fedora nails that classic Bogart style, while the mirrored shades not only add excitement, but they include a “look-behind” design that will grant you constant surveillance. Additionally, this kit includes an invisible ink pen with an LED flashlight top and a functioning motion-detecting camera.

Not only are you getting the classic spy look with this kit, but you'll also get two other tech-heavy tools. 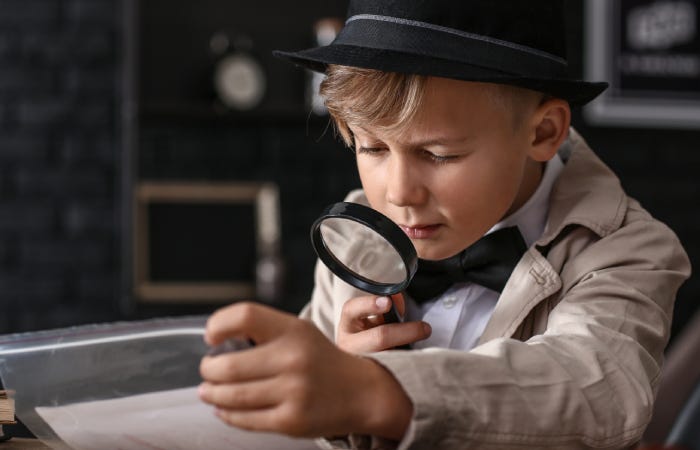