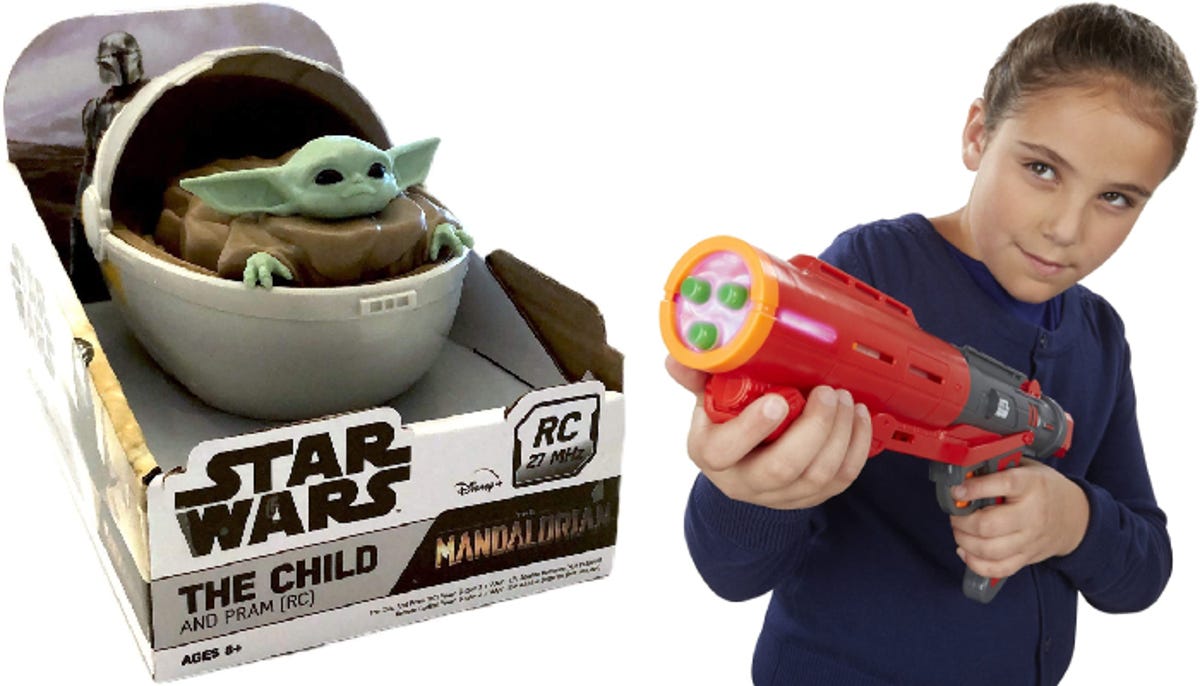 “May the force be with you.” There are few quotes across the spectrum of popular culture that immediately fill fans with a childlike wonder like these six words do. It’s why viewers across the galaxy have been in love with all things Star Wars for the last 44 years. And while the films rake in the money, nothing truly steals a child’s heart quite like the toys. From lightsabers and piggy banks to painstakingly crafted action figures, Star Wars toys are a hot commodity year-in and year-out because there’s magic in these stories. Space samurais, intergalactic cowboys, and princess warriors. Really, what’s not to love? If you’re in the market for a new kind of Star Wars toy, here are a few options that we recommend.

What to Look for in Your Toy From a Galaxy Far, Far Away 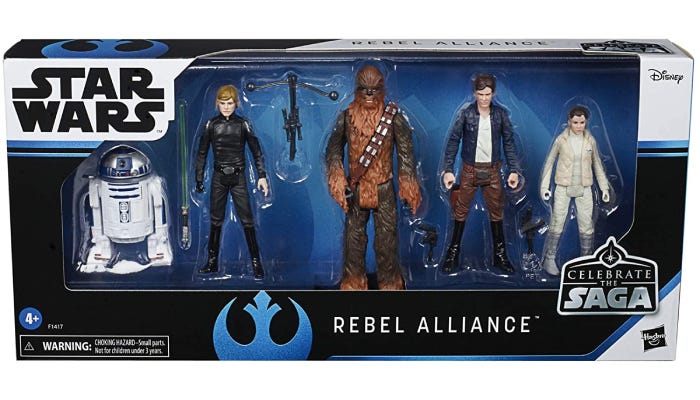 A collection of everyone’s favorite galactic heroes from George Lucas’ original trilogy, this Star Wars Rebel Alliance Figure Set includes five figures and their classic accessories. Featured in all of their rebel scum glory are Princess Leia and Han Solo, both of whom sport their iconic blasters, as well as that towering but lovable Chewbacca, the brainy R2-D2, and the chosen one himself, Luke Skywalker. While Leia and Han are featured in their attire from The Empire Strikes Back, Luke’s figure dons the deep black wardrobe featured in Return of the Jedi, complete with the Jedi master’s green lightsaber. Each figure is designed with multiple points of articulation for total freedom while playing. 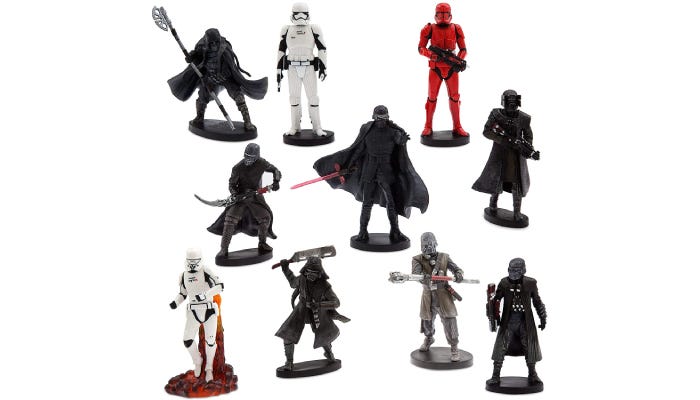 Looking for an option that isn’t afraid of the Dark Side of the force? This First Order Play Set features a handful of the most menacing characters from the latest installment in the space odyssey franchise, Star Wars: The Rise of Skywalker. It’s an epic, 10-figure collection that includes the most powerful members of the Sith regime, everyone from First Order Troopers and the Knights of Ren to the big baddie Kylo Ren. This bundle is an authentic Disney Store original, and while its figures don’t feature adjustable joints, they still make for staging great battle sequences and for dressing a kid’s desk or shelves. 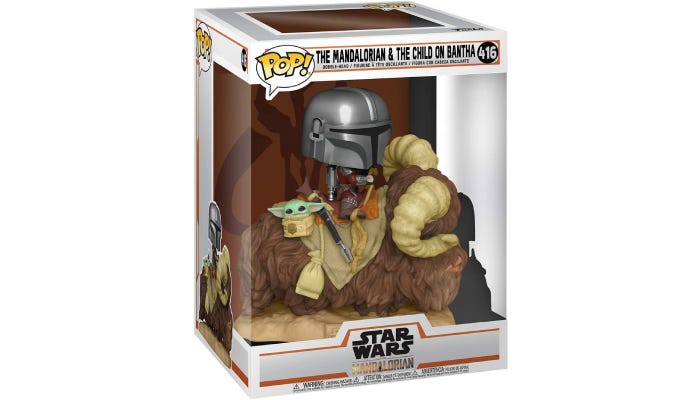 Funko Pop! figurines have quickly taken the collectors’ market by storm in recent years. Action figures and memorabilia are still in demand, but there’s just something about seeing your favorite pop culture characters shrunken down into adorable, pint-sized versions of themselves that can make any rational human being say, “I’m buying that today.” This Funko Pop! Mandalorian figurine achieves just that too. Resting on top of the lumbering bantha is the show’s central character, Din Djarin, the mysterious space cowboy with a heart of gold. Naturally, The Child is also featured on this figurine. It stands 6 inches tall and is a great sight to include on any desk or shelf. Users can also keep it in its window display box for a bit more prestige.

A new-age classic of the Star Wars world, this figurine works well for any fan's desk or shelf. 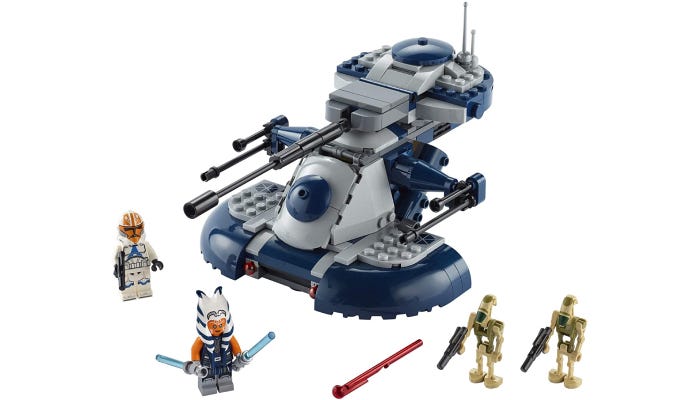 Highly detailed and a welcoming challenge to assemble, this LEGO Star Wars: The Clone Wars set depicts the thrilling conflict between the 501st Legion and the Battle Droid army. The set’s selling point is a commanding armored assault tank that features two spring-loaded shooters, a rotating turret with an elevating cannon, and a front and turret hatch. Of course, this tank would be nothing without the enemies to operate it and the heroes to destroy it. The mini figures included here are two Battle Droids, a Clone Trooper, and the dual-saber-wielding force to be reckoned with, Ahsoka Tano. There are 286-pieces in total, so you can funnel plenty of building and playtime into this set.

A 286-piece battle recreation of the franchises' beloved animated series. 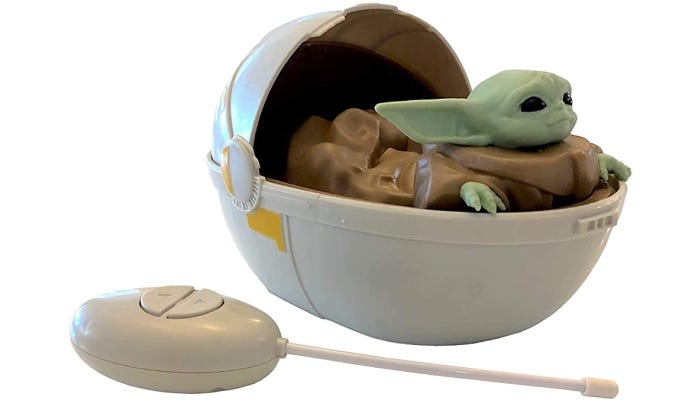 On the flip side of Din Djarin’s brooding persona, there is the adorably mischievous Baby Yoda, also known as Grogu or The Child. He’s the little green fuzzball Star Wars fans can’t stop talking about, and now he’s gone mobile. This Remote Control Crib Car features a baby on wheels with two-channel movement to send him forward and backward with a good burst. The automated crib includes a remote control and instructions for efficient use. And though it’s made entirely from plastic, there’s a notable amount of detailing in the crib’s design and Baby Yoda’s face.

A quick and agile automated vehicle that will easily win over fans of the franchise's most lovable character. 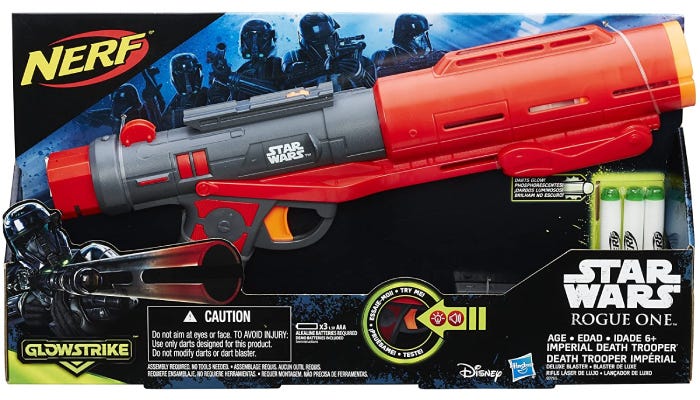 For the kid who loves the thrill of physically reenacting the greatest battles in Star Wars history, try out one of the galaxy’s most trusted side pieces: the blaster. This Nerf Imperial Death Trooper Blaster from Rogue One features an assortment of convenient perks that even the most skilled marksman can appreciate. Laser blast sound effects emit from the side of the blaster with each pull of the trigger. Additionally, it utilizes GlowStrike technology, a glow-in-the-dark coating on each tip of the included three darts. 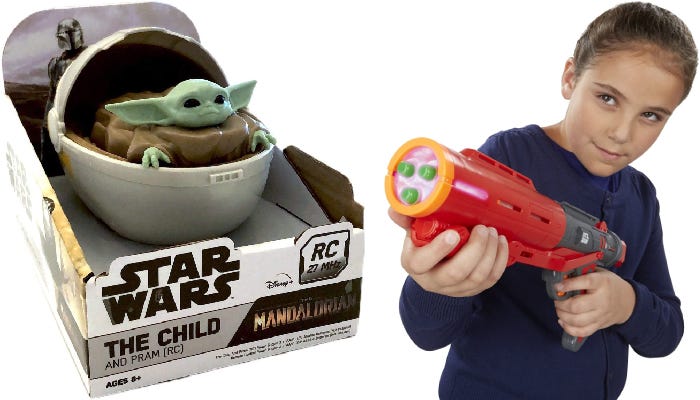